: Teri, congratulation on your break out. You are the focus on this patch.

: What do you mean, captain? I am always the lead in this game.

: Look, how beautiful my dress is. It surely elevated my cutie to another level.

: Yeah, to the level that people only can recognize you by your height rather than your new look.

: [Cough] Anyway, it must be difficult to have this new battlesuit.

Don’t worry. Teri is not only cute but also kind. Dawei already loses to my cutie and promises me give more ways to captains to farm the materials. The following is the summary of sources of the mats.

: That’s nice. But it looks like the grinding will take some time, and I really want to see the true power of your new battle suite now.

: No problem. Talk to the person over there.

: Ciao, I have the best crystal exchange rate in the town. We also sell B- Chip. Oh, dear, not his one.

: [Sweating & turn away] Hey, Teri. At what core level your new battle suit is good. I need the information to figure out how long the grinding takes.

: Teri is good from the start.

I don’t know. All I care about is the appearance of the battle suit.

: [sign] I go ask Einstein instead. [A moment later] Oh, unlike some people, Einstein gives me solid and quick response. 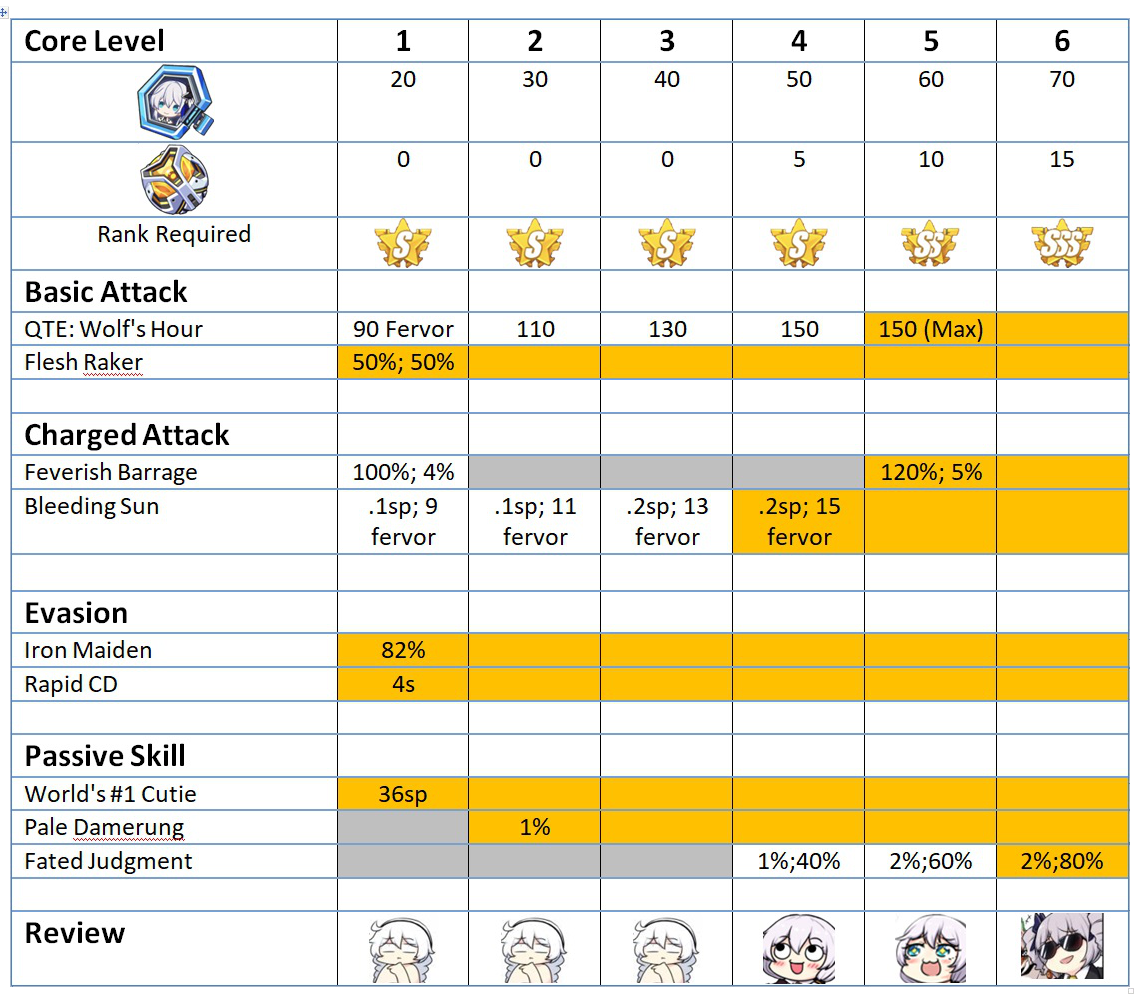 At Core Level 4, TP’s battle suite starts to reveal her power because her second built-in multiplier is unlocked. At Core Level 5, skills gain some significant upgrades. For example, [Fated Judgment], the amount of critical damage increased per hit gets double, and means less time consumed to achieve the max effect. And the charged attack also got powered up. Core Level 6 surely is the best. But in terms of time and materials investment, it is not necessary.

: Einstein also sent me large file and message. “For the sake of future battle, make sure Theresa read the manual ASAP.”

So, Teri, Well, I guess you know how to use your new battle suite. Unlike your Violent Executor battle suite, you become real physical DPS this time.

: What? There is no doubt that I am physical DPS since v1.0. And I don’t really care about the features of the new battle suite. If spamming one rotation of attack doesn’t work, just go spam another set. And repeat step one until the target is terminated. There is no step two to me. See, how smart Teri is. My weapon is not only being cute.

: Hahaha, nice joke, Teri. I see how goooood you are. [Cough] Let’s go through some basic stuff first. In normal status, you just need to do basic attack to gather Fervor. Performing ultimate evasion can accelerate the process. At max Fervor, tap and hold attack key to enter Fervent State. And that’s the time you can show off.  Fervent State will grant you some benefits and make you dealing more damage.

: So basically, you just repeat what I said before. What I need to do is just spamming basic attack.

once your combo counter is more than 100, [Feverish Barrage] becomes available and you can deal some serious damage in one charged attack. And I also prepare more information for you.

: Take a look at this. Your 4th sequence attack is outstanding, because ---

: Because you highlight it?

: No. It’s because it contributes about 50% of the damage and Fervor. However, in real battle, it can’t always achieve the best result. 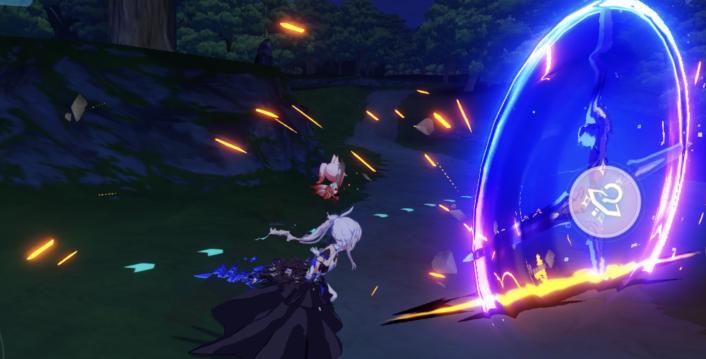 (Move of 4th sequence of attack)

: The wheel of blades doesn’t have wide attack area. So it is hard to make its max hits (11) against small size and mobile enemy. As a result, you gain less sp and Fervor and you need to make another set of basic attack to max out the Fervor meter.

: So, the problem is the design of the blades, not Teri.

: Ahhhhh, The normal mode sounds so boring. What? I can’t even do charged attack. Captain, how long do I need to do the basic attacks to maximize that Fervor thing?

: Instead of giving you mathematical result, the following chart gives the amount of time to fill up the Fervor meter at different Core Level in real battles.

: Another chart? You got to be kidding me. 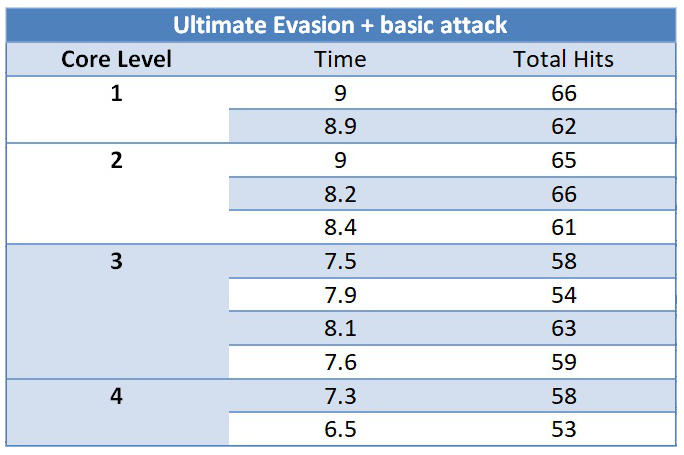 : You can see the trend that less time is required as the core level increases. And that’s because your skill, [Bleeding Sun], which gains Fervor upon scoring a critical hit, is also leveled up at each core level. But it reaches the cap at core level 4.

In this scenario, there is a 28% difference on time consumption between core level 1 and 4. So core level matters a lot.

Before entering Fervent state, the input above will trigger the 1st sequence attack (3 *40% physical damage) and Activation of Fervent State (4 * 160% physical damage),
and make a total of 7 hits. The whole process takes about 1.5s and it has strong effect to break shield. 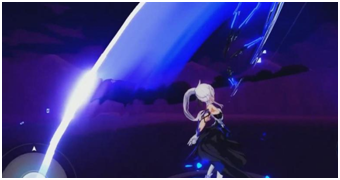 (*Move of Activation of Fervent State; it can chase enemy in short distance)

Holding attack key during the execution of basic attack sequence in normal status may not allow Teri enter Fervent Mode. Instead, she will be idle in the field.  Unless it’s about the end of the basic attack, don’t holding the attack key before use the dodge to cancel the current move first.

The move in activation of Fervent state also can lift the enemy. However, the enemy can be lifted so high that Teri’s 4th sequence attack will travel underneath the enemy and make no hit. To avoid this happen, stop the attack (not press attack key) for about .5 second, and allow the enemy to drop down little bit.

: like Herrscher Mode, your Fervent Mode is not considered as burst mode. And this property provides you more diversity on choices of stigmata and makes you being able to gain sp during fervent state.

(*The background also tells you which state TP is at)

A: 1. Ignore Interruption and gain 40% damage reduction. These features provide stable environment for TP to output damage. (*Teri can be knocked down by enemy still)

4th sequence attack is a cross blade wave shuttles through enemy, and it will stay in the field for about 1.5s. It won’t reach its maximum hit, which is 12, against
small size enemies including regular and elite mobs, and boss.

The 5th sequence attack will shoot 4 blades to the target, but this move is time consuming compare to other moves. The blades actually lands on the target almost when the blade wave disappears. If the command for the 5th sequence attack is input at the time that Fervor runs out, will be executed still regardless the end of Fervent Mode, and the attack will gather Fervor in normal status. (About 10%) 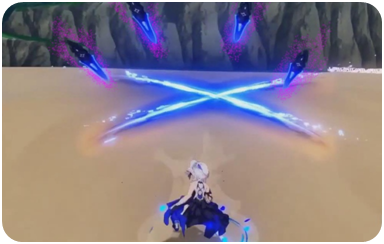 When combo hits are less than 100, charged attack deals 4 * 120% physical damage.
the small amount of damage, this charged attack can used close  the enemy.

Before the third hit is triggered, dodge can cancel the action, and the close gap effect still applies.

A: Depending on core level and critical rate, fervent state can last about 2.6 to 3.3 whole sequence attack.

The following is the duration in real battle at different core level. 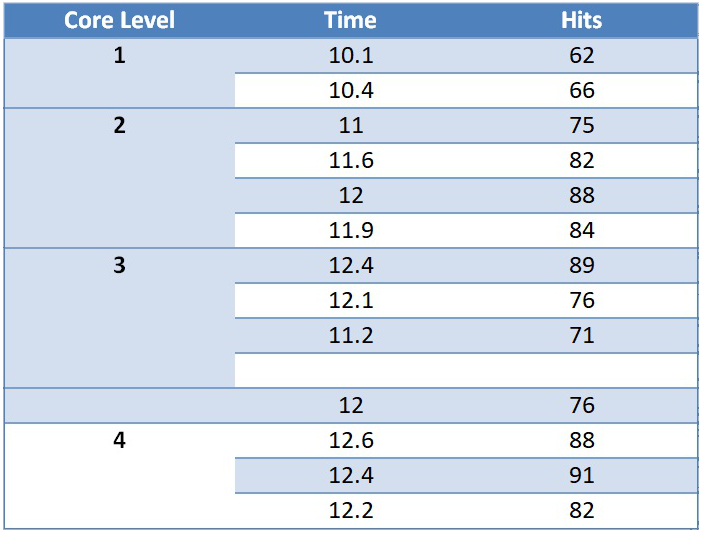 We can see the duration goes up along sides the core level. The longest duration is 4 set of attacks, on average, it’s about 3 sets attack depending on the core level. 4 sets is the maximum.

Q: How to gain Fervor?

Q: How to apply bleeding debuff on enemy?

[Fang Execution] can deal 19* 8% attack of physical damage on enemy and it lasts in the field about 5.3s. Despite the lack of damage, [Fang Execution] makes 19 combo hits.

[Pale Dammerung] provides TP a rare multiplier, debuff multiplier, in large amount
. At max, it goes up to 40%, which is more than what Newton (b) gives. And 15s duration is long enough for Teri to fully burn out the Fervor meter.

There is no effective way to extend Fervent State because the Fervor consumption rate spikes after 12s. However, [Waxing Luna] changes this picture. It not only gives max Fervor immediately but also resets the consumption rate [Pale Dammerung] more useful. 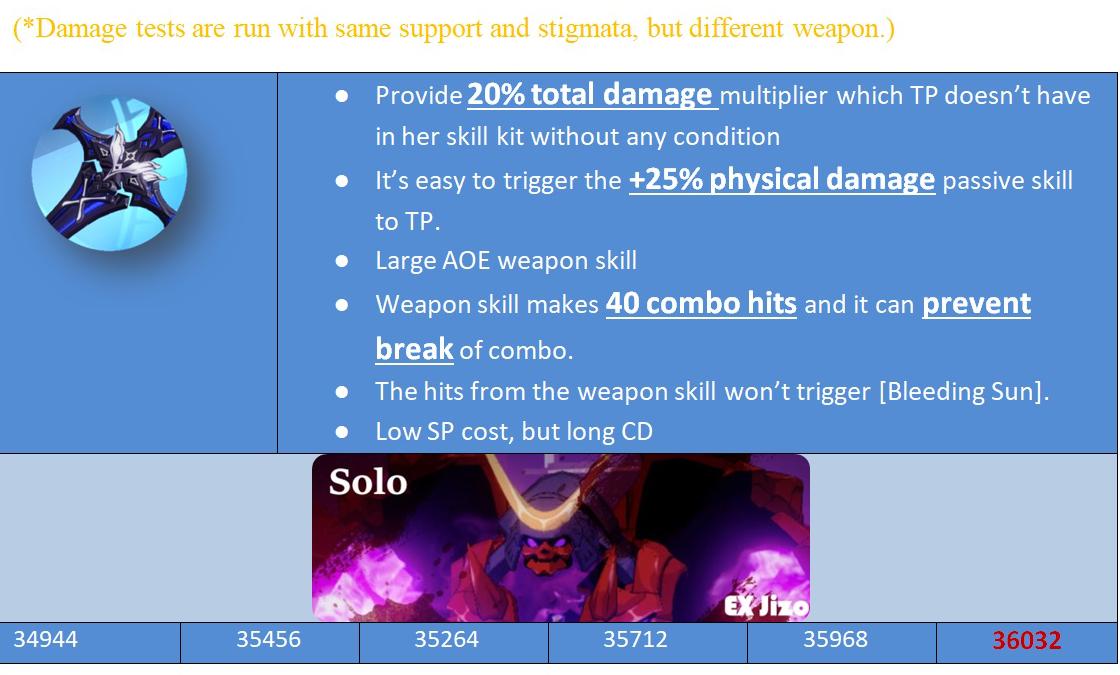 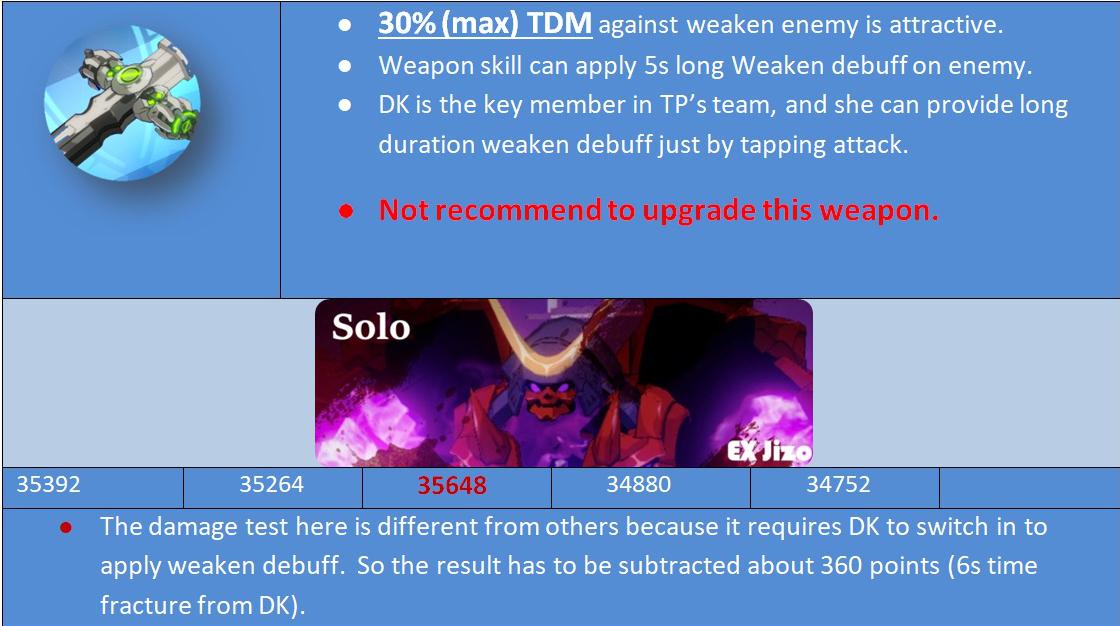 Solo: it's pretty much same as the process in mix attack, but the ultimate dodge, weapon skill and ultimate skill are applied as many as necessary to achieve the best result. 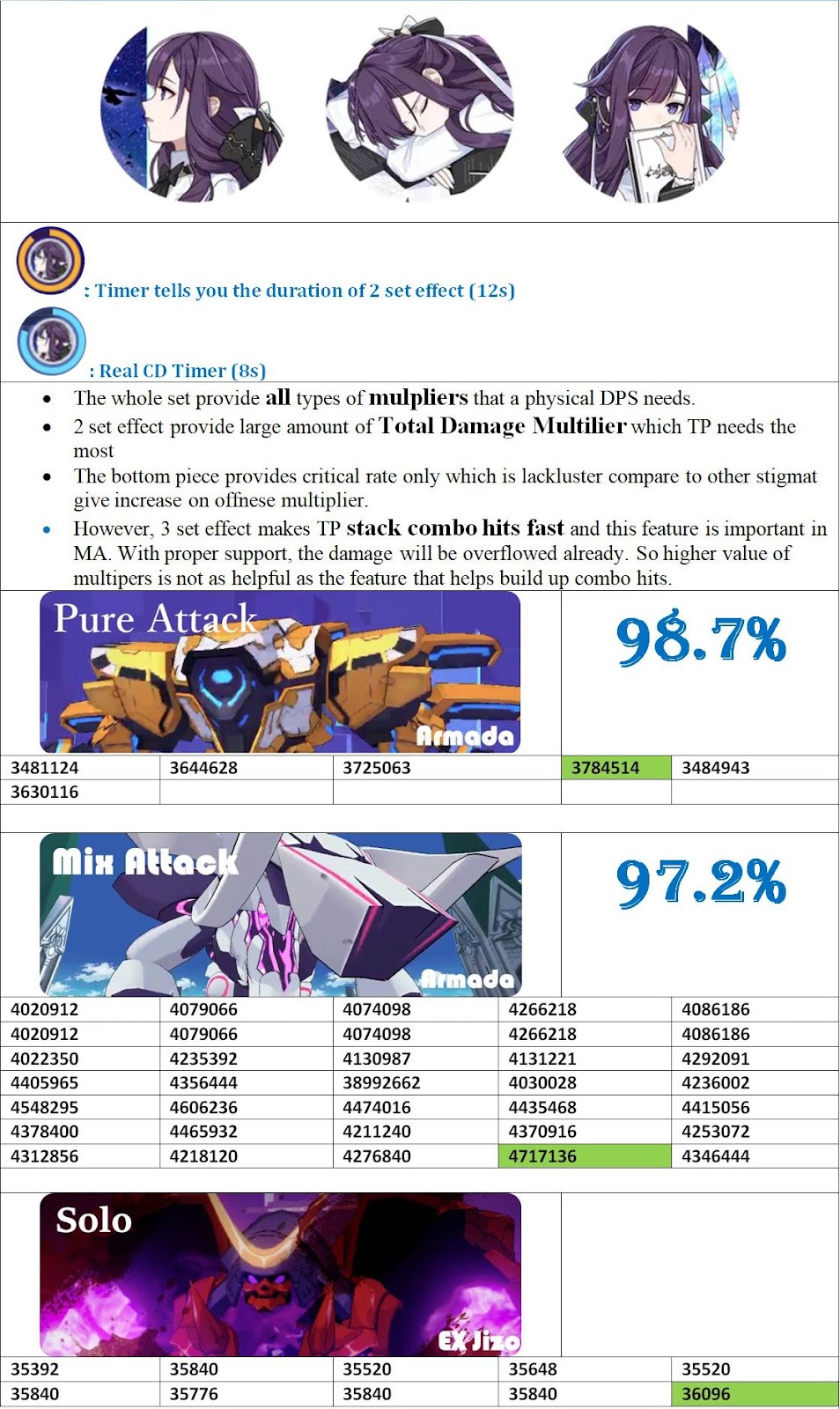 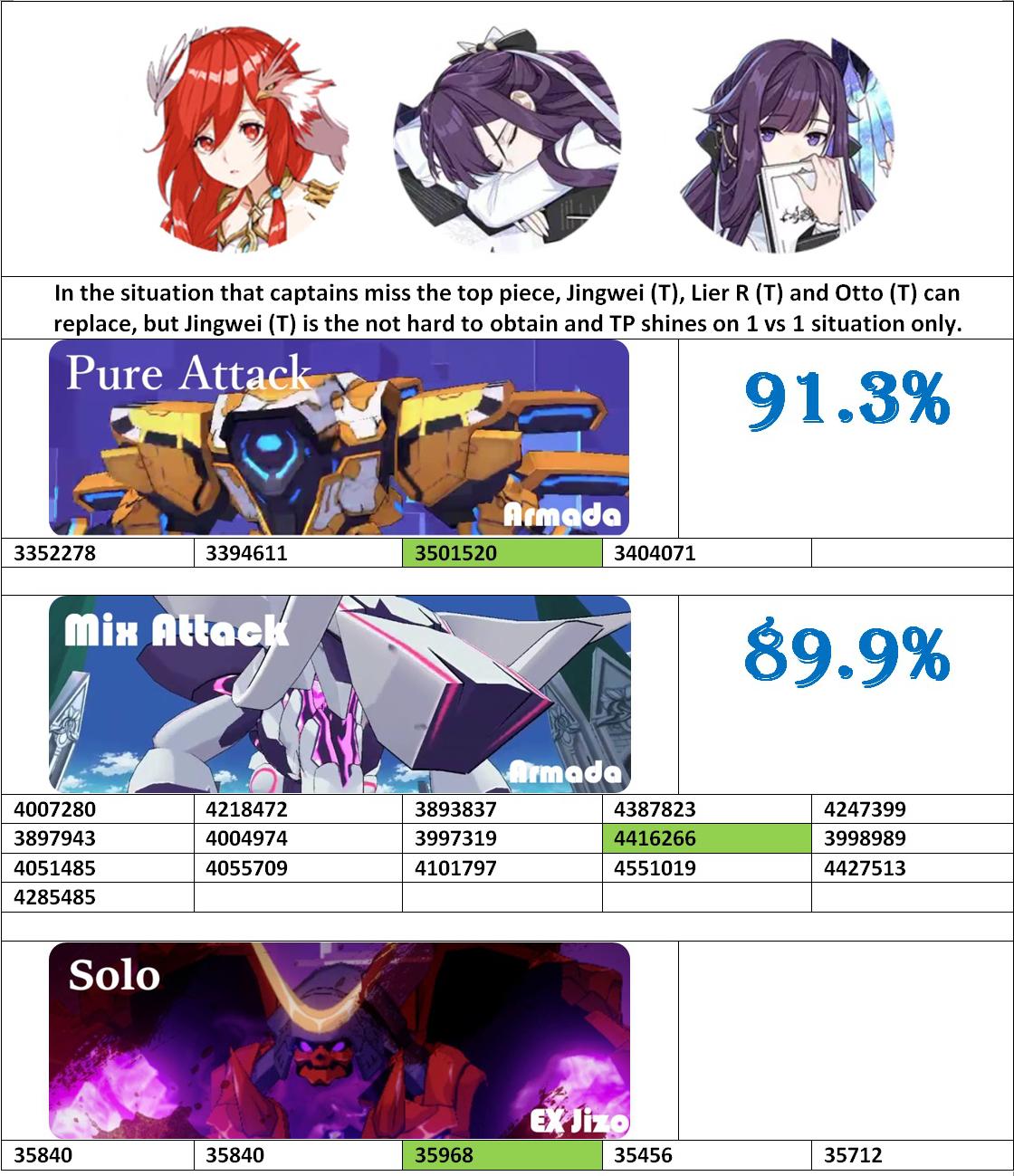 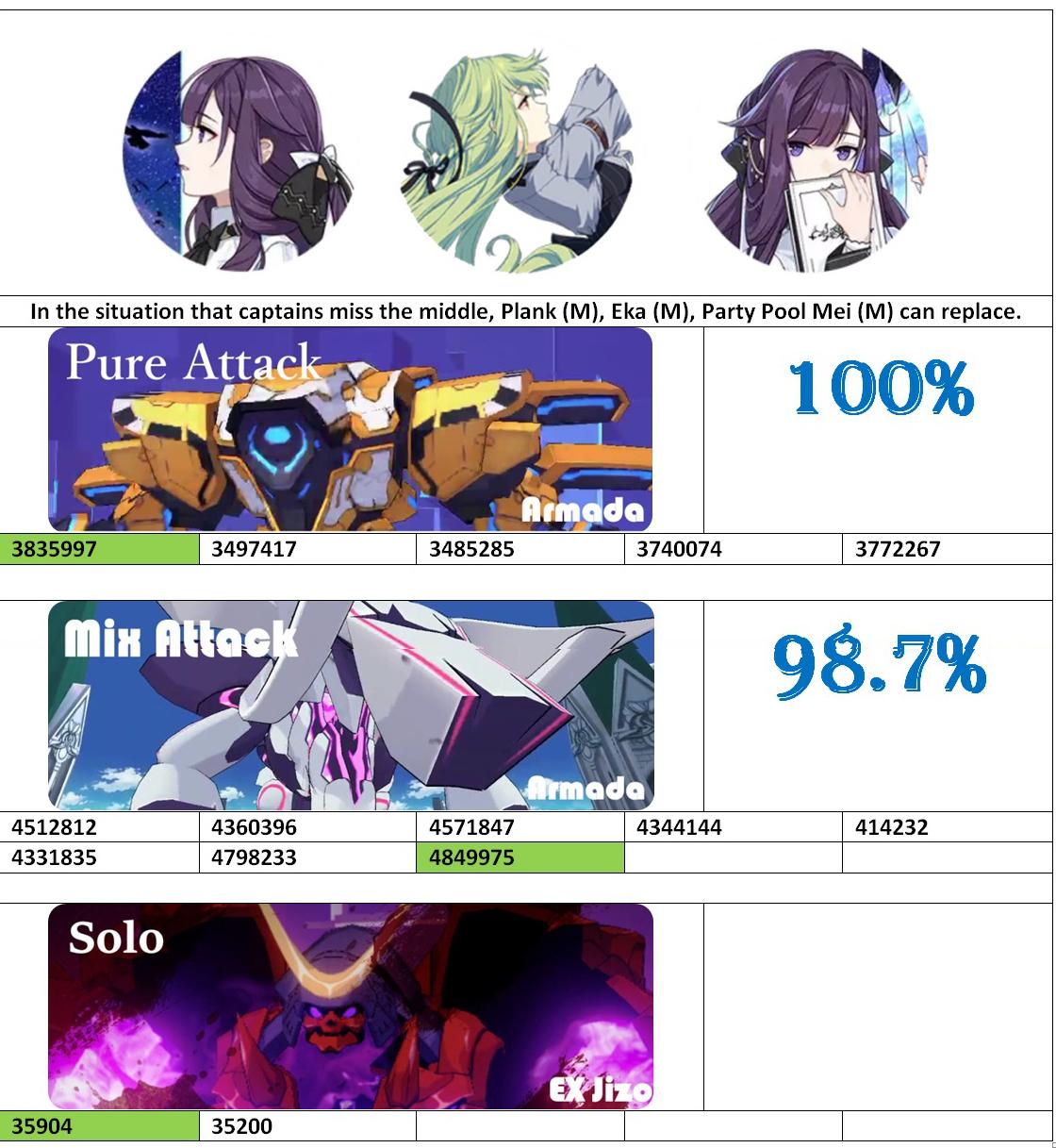 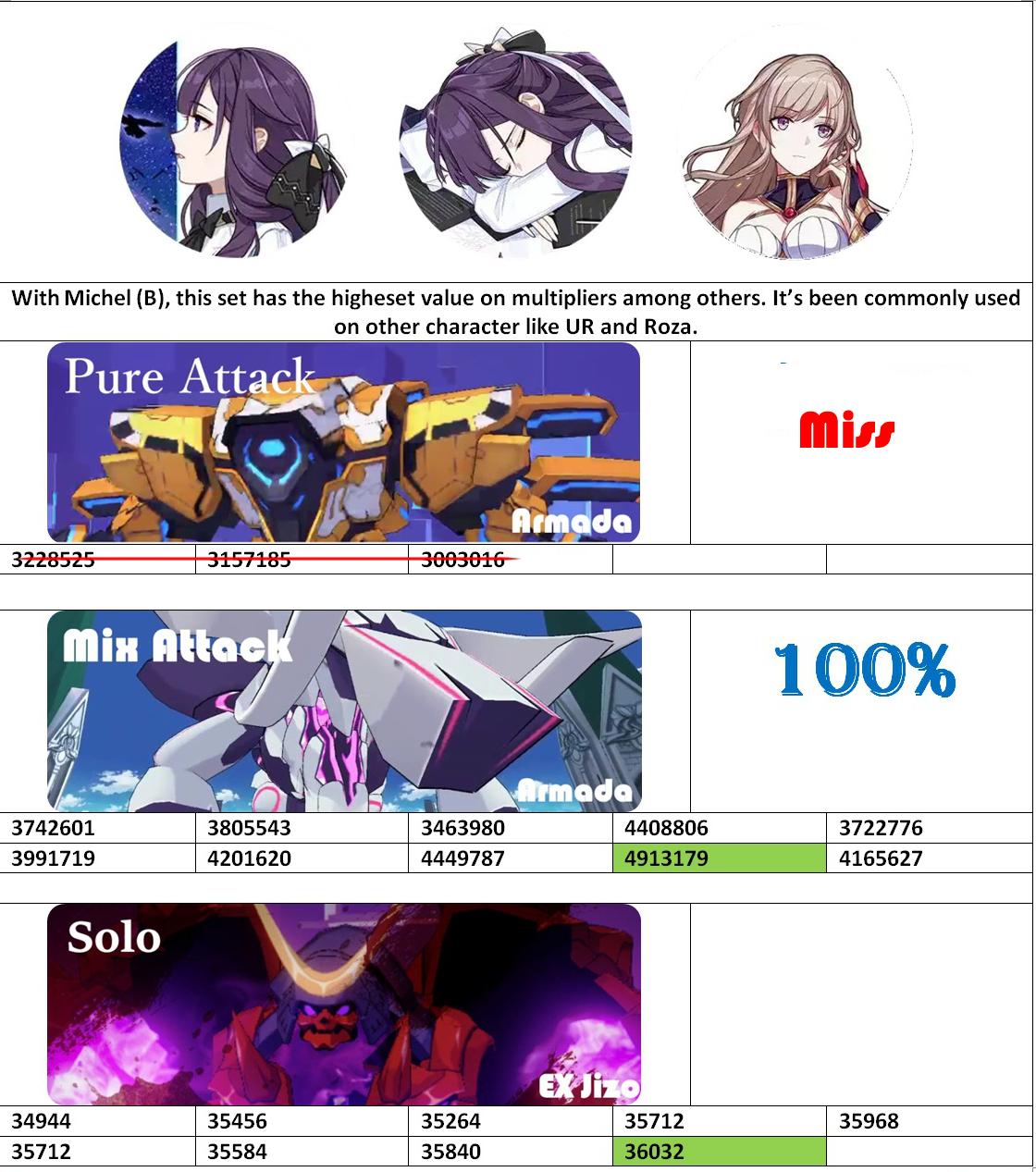 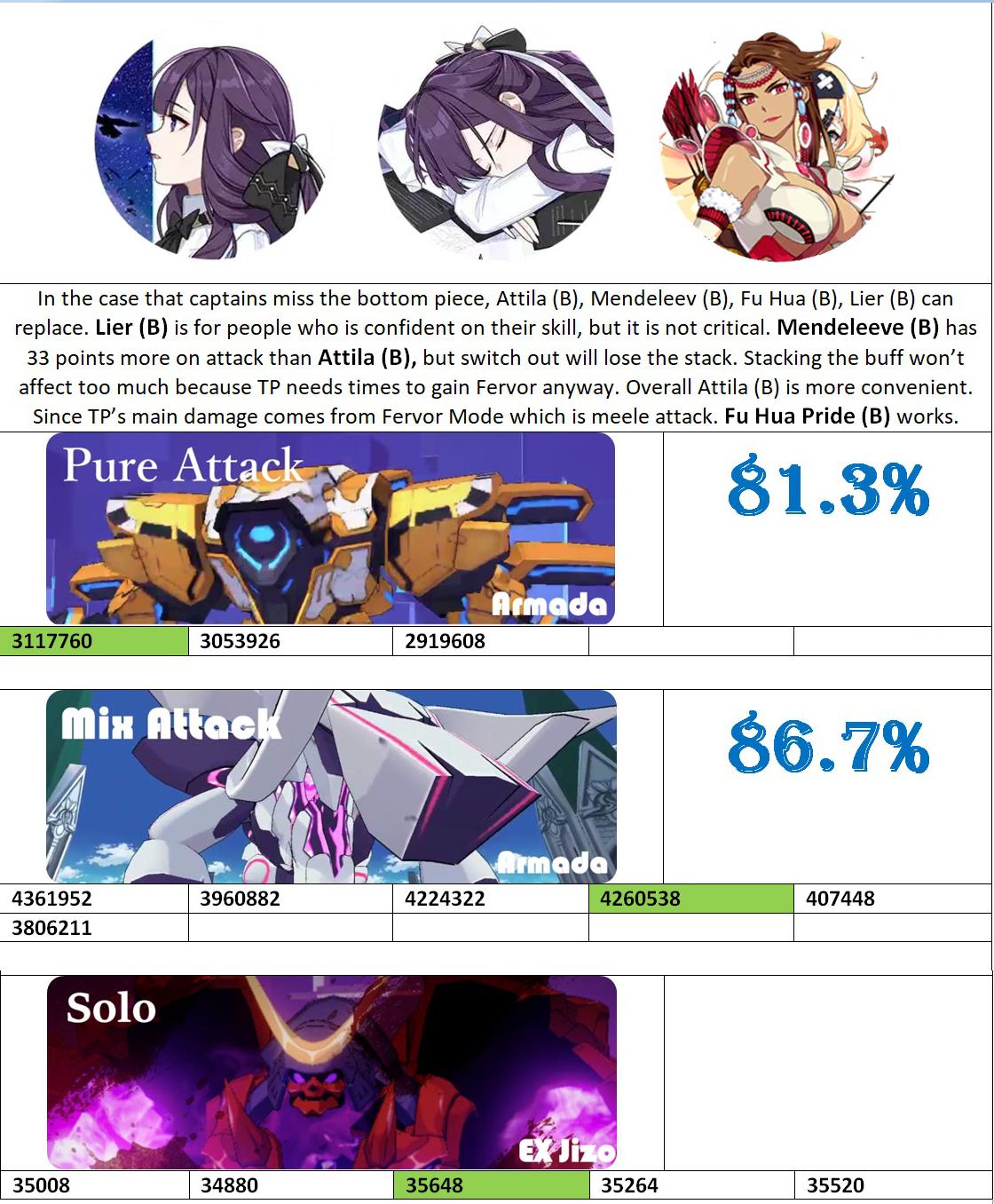 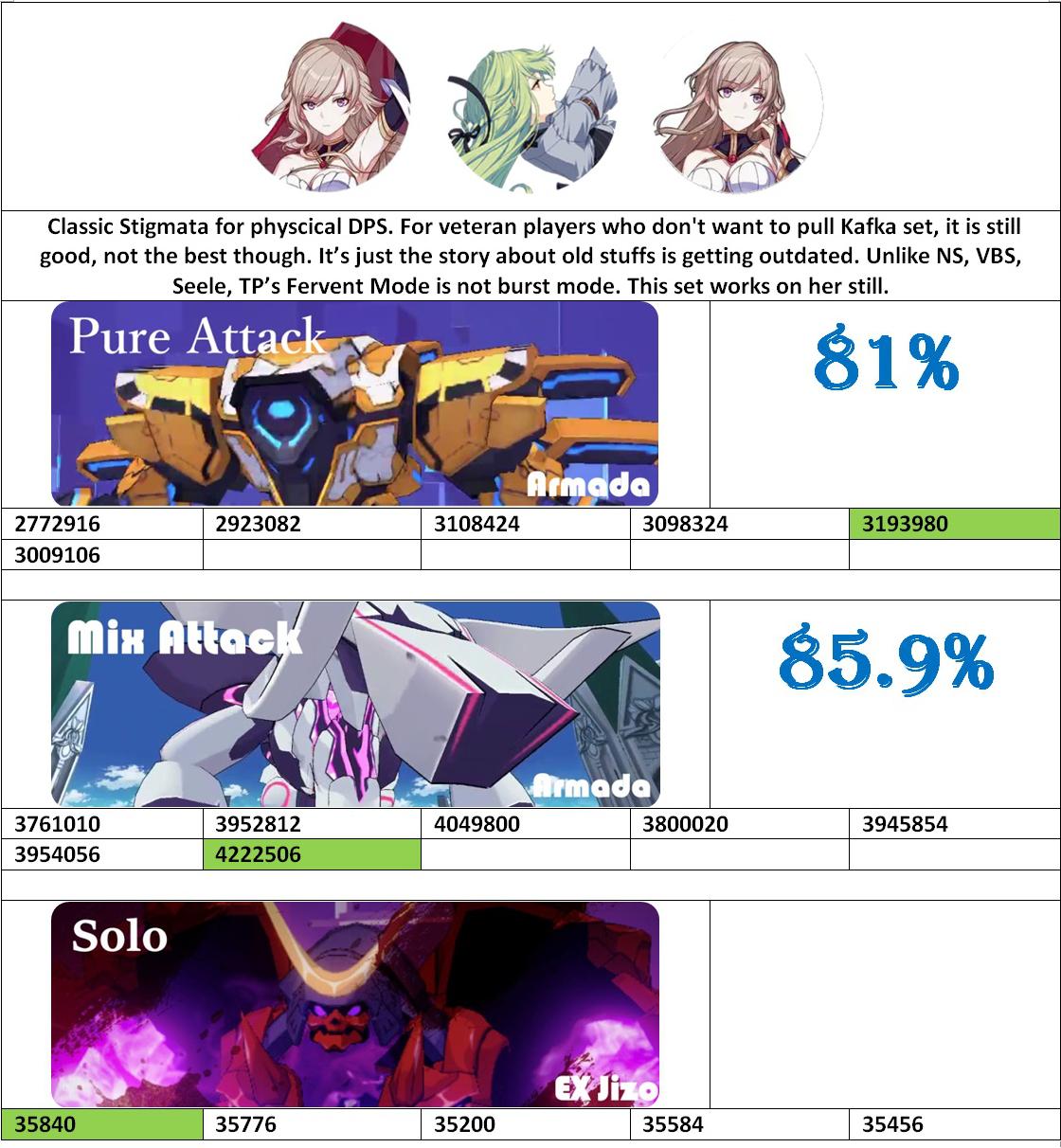 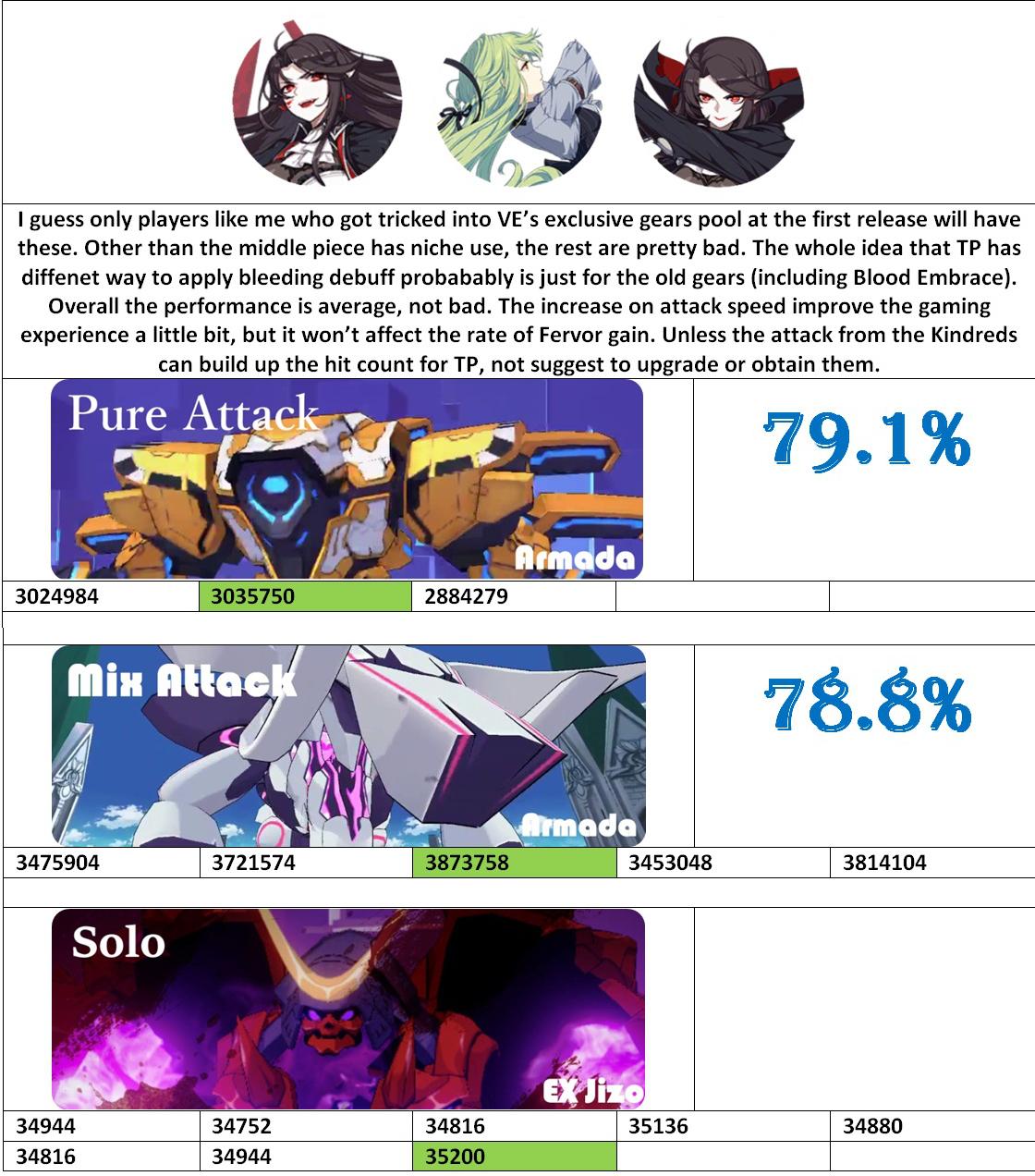 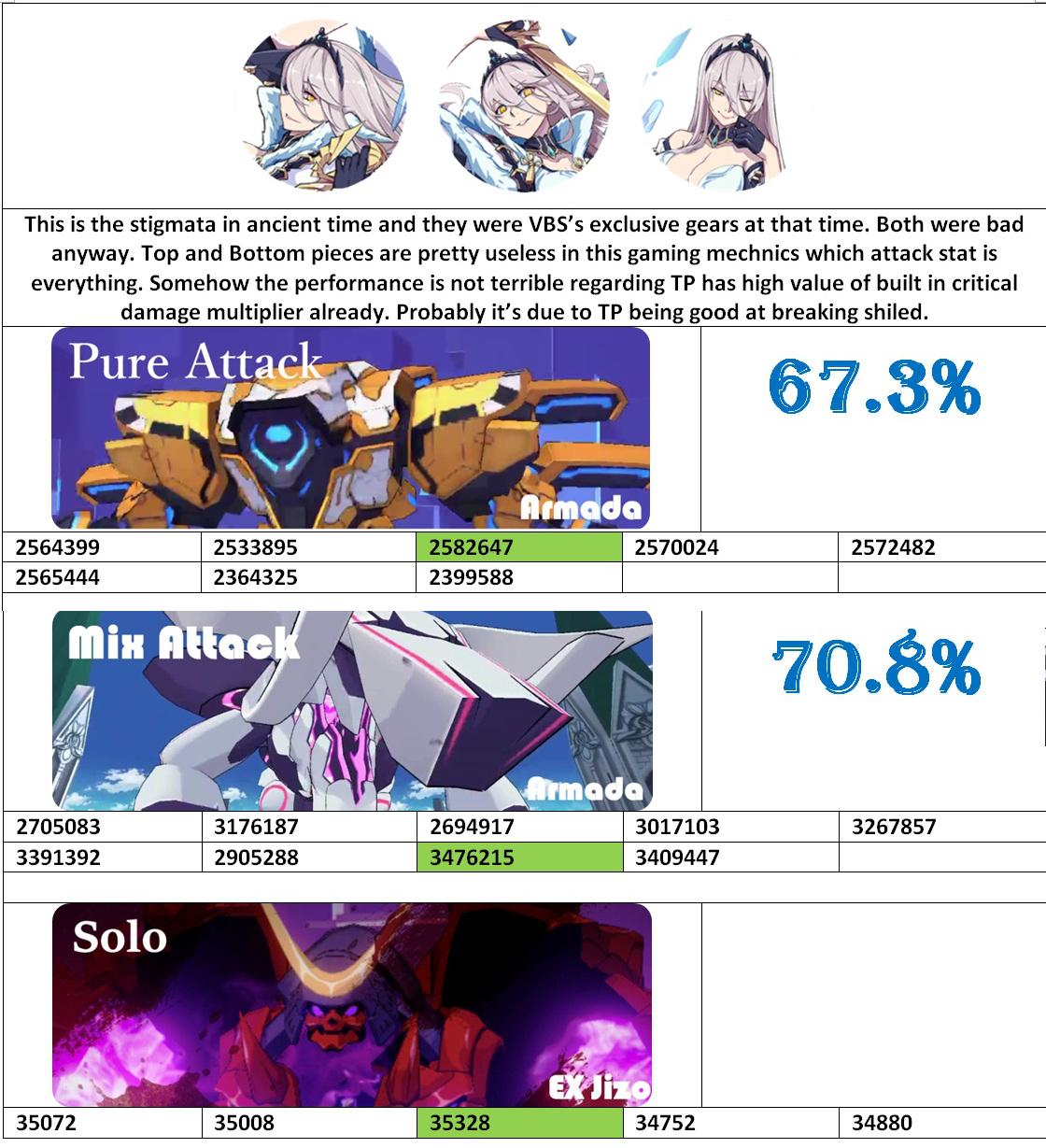 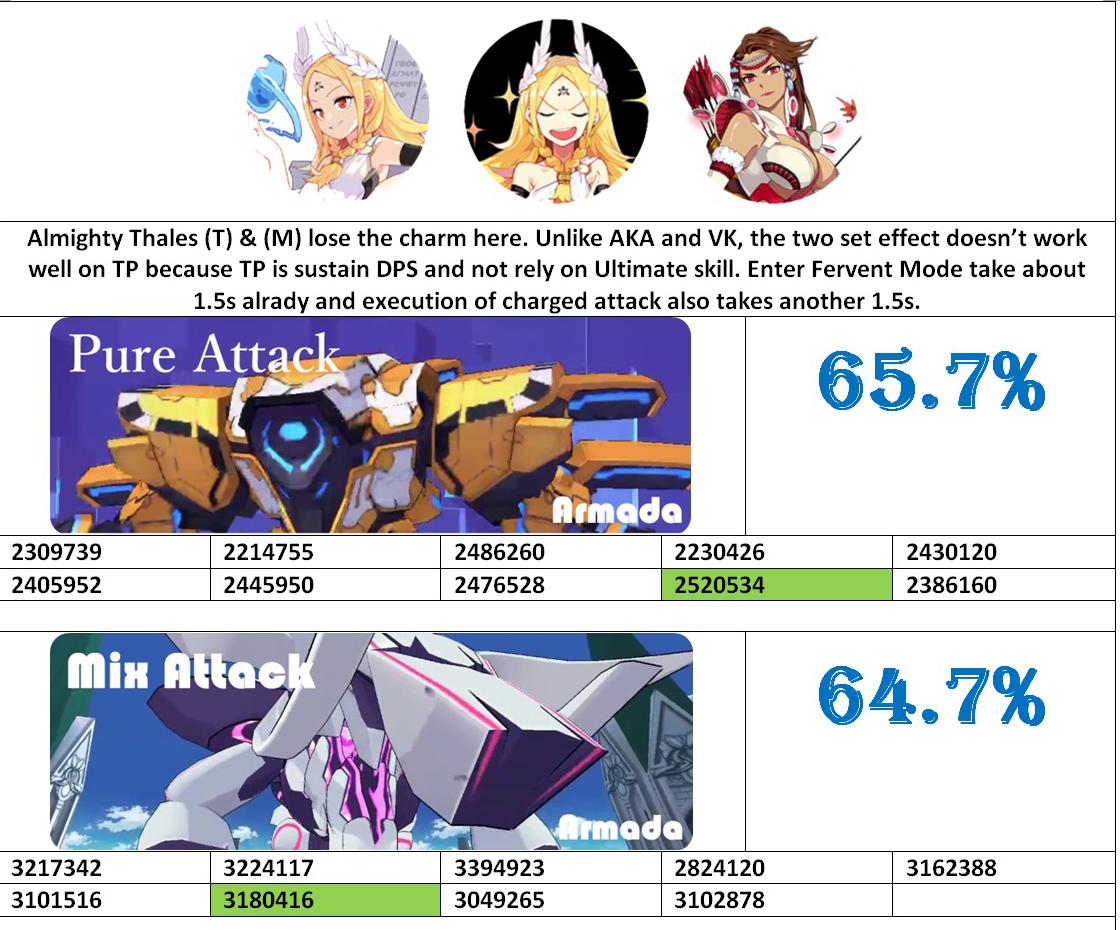 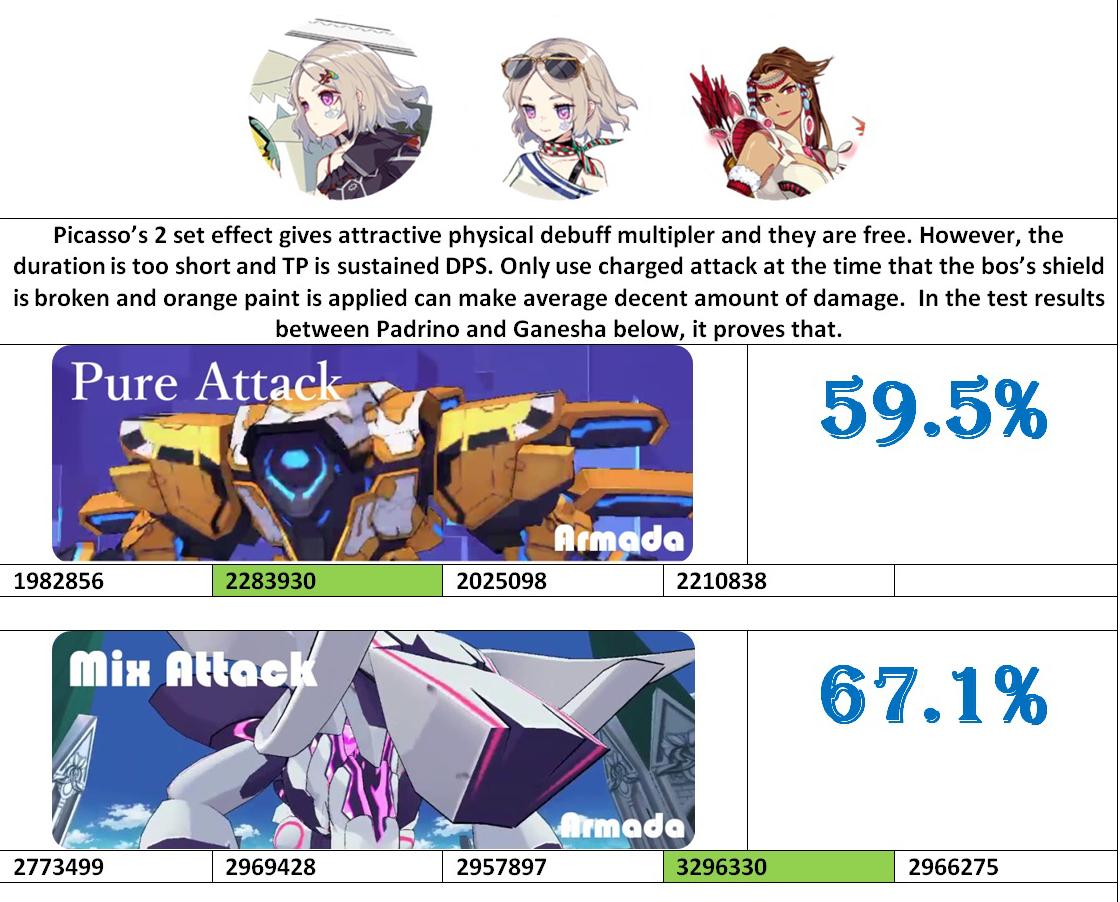 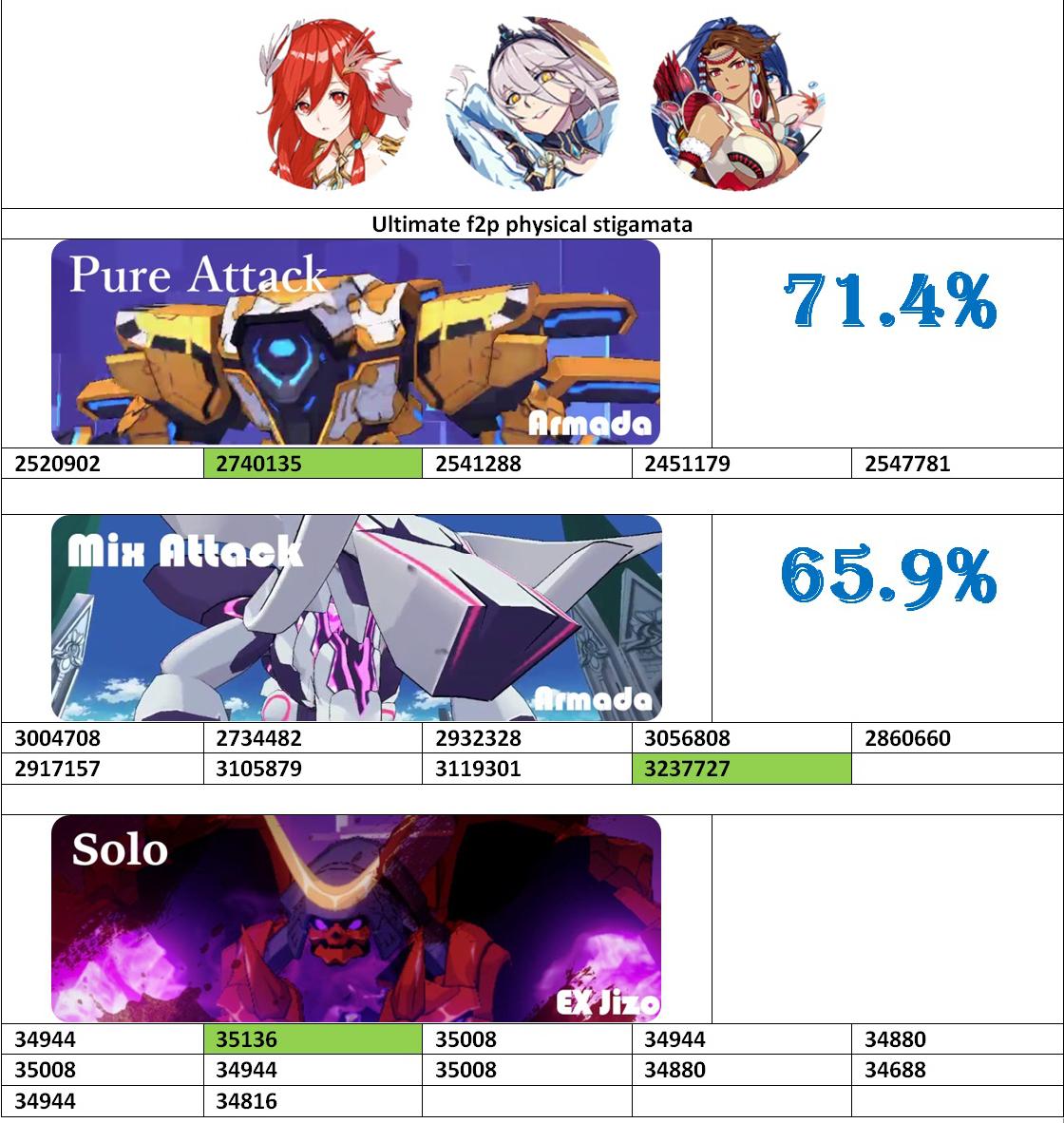 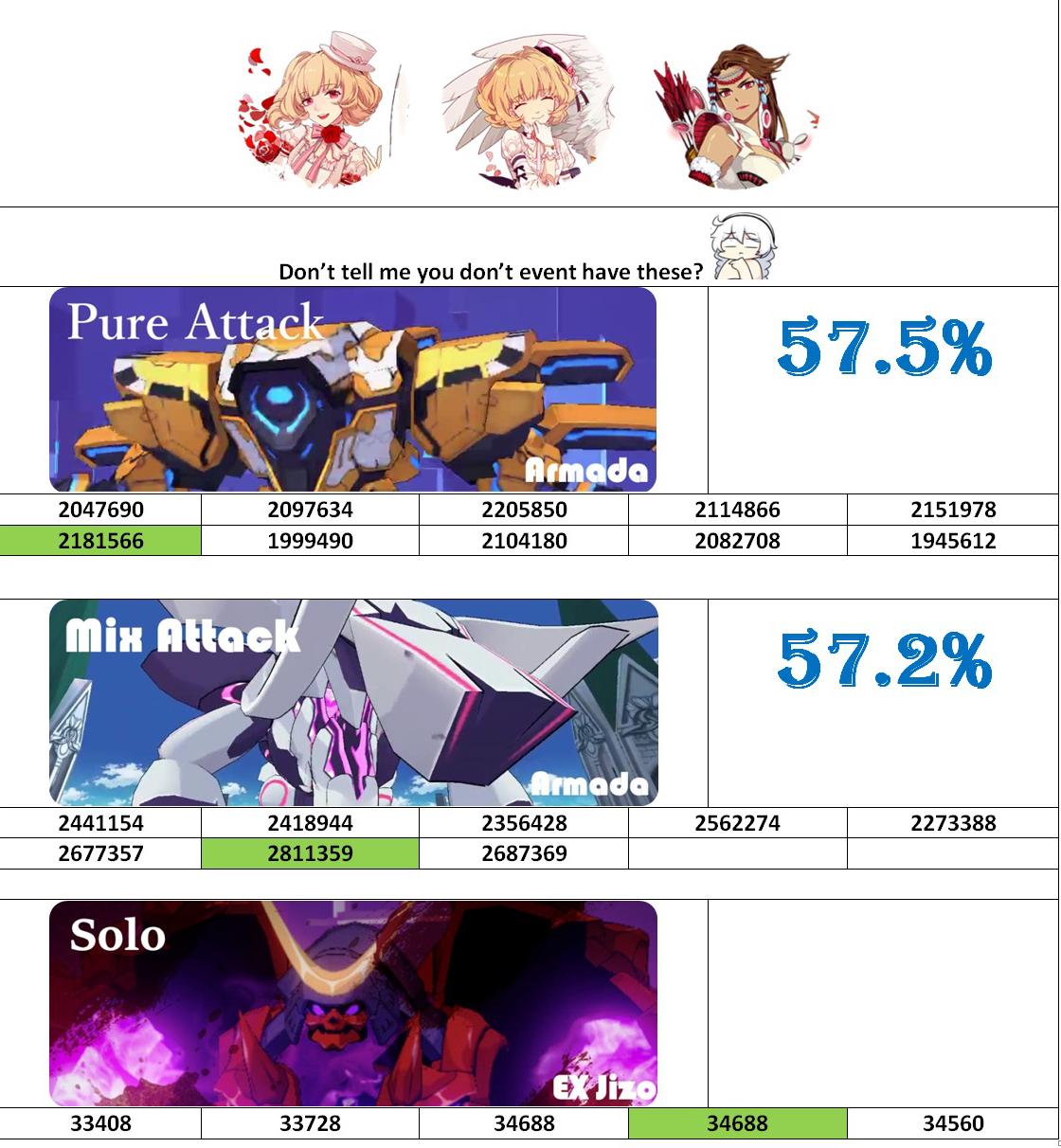 A: Firstly, it's not recommend to the captains who don't have S KMB, S LE, SS PX and probably SS BR. TP doesn't fit well in master tier because master tier MA is all about burst damage and TP is sustained DPS. There are few bosses in QS she can deal with. However, she is much more expensive compared with NS which is f2p friendly and strong at the same time. In the Exalt MA, TP performs well on Jizo and DXY and she can make a good score easily with small amount of support, but she still needs the core level and her exclusive weapon at least. On the other hand, SSS NS is still doing O.K on those bosses, but the battle is harder and the cap on the score is also lower.

To me, the debut of TP solves the problem for the captains who happen to have VE because of bad luck or pull her without doing research ahead. It has been a long time that VE is valued as Rank B instead S even though the charged attack got revamped before. Her strong QTE and the fact she can carry Judah make her show up in MA occasionally, but the new meta makes her disappear quickly in global server. The return of new VE is surely stunning. 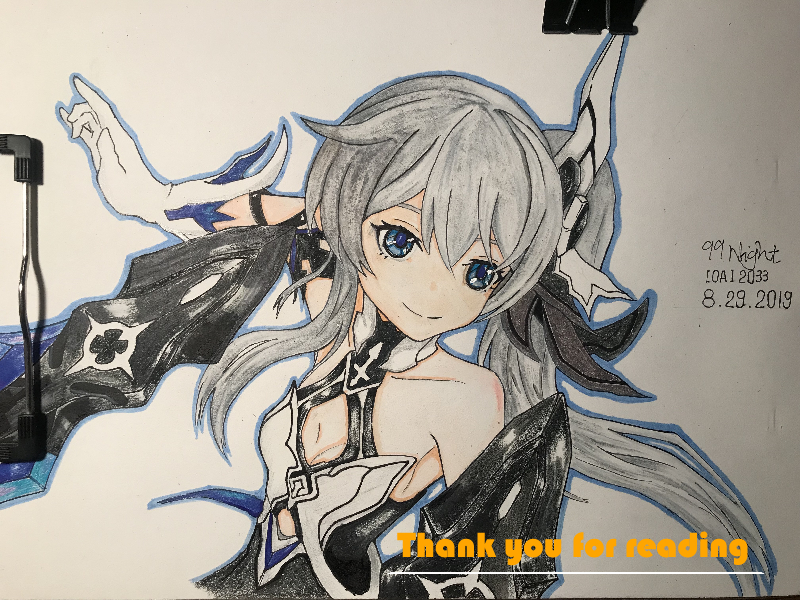 What? U still here! 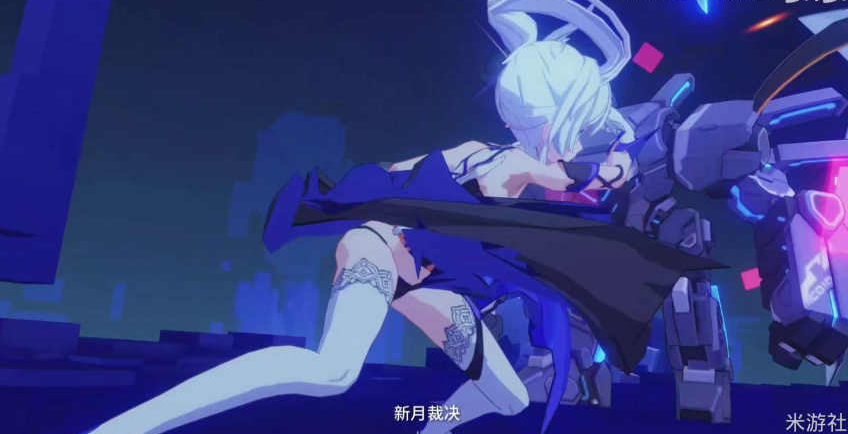