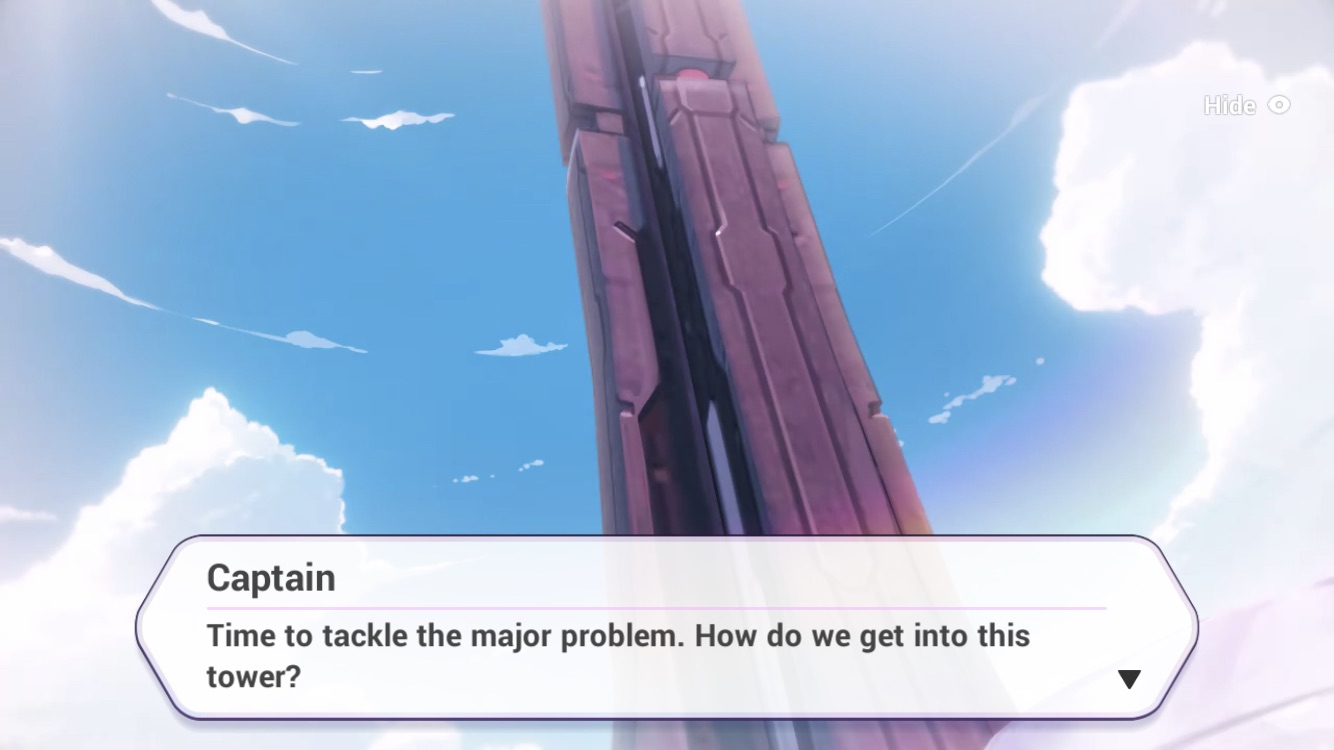 We are back with Part 2 of the Desert section. Here we will find out who has been disturbing the wild life, as well as underlying causes to how the desert terrain came to be. But will these answers just lead to more questions?

As you journey from 3-8 to 3-14, you will have to overcome many challenges, they come in the forms of third-person shooter stages and Golden Tomb which consists of multiple floors of puzzles.

The Desert will be filled with predominantly Psychic type enemies, with a few Biological types mixed in. Biological Chibis would be optimal for its type advantage against Psychics while being neutral against other biologicals. Good Chibis including Lightwing Unleashed, Yae Sakura, Night Squire, and Luna Kindred.

Most of the shooter stages should be easy and after surviving Beach and Village, you should all be veterans by now. You will see objectives such as kill 50 enemies, race against the timer, and collect 10 meats. These stages are all very easy and should not present too much issue.

For map 3-8 Colossi, the goal is to reach the end of the map before the timer ticks down to 0. You will be slowed if hit, therefore, I would recommend using Luna Kindred who has an extra evasion charge.

For shotgun users, if you press and hold the fire button as soon as the round loads, the shotgun will shoot full automatic, allowing you to bring down the toughest bosses with ease.

This puzzle-centric map is reminiscent to Fairytale Rhapsody event and Yae's Village from the Village section. It will consist of four floors. 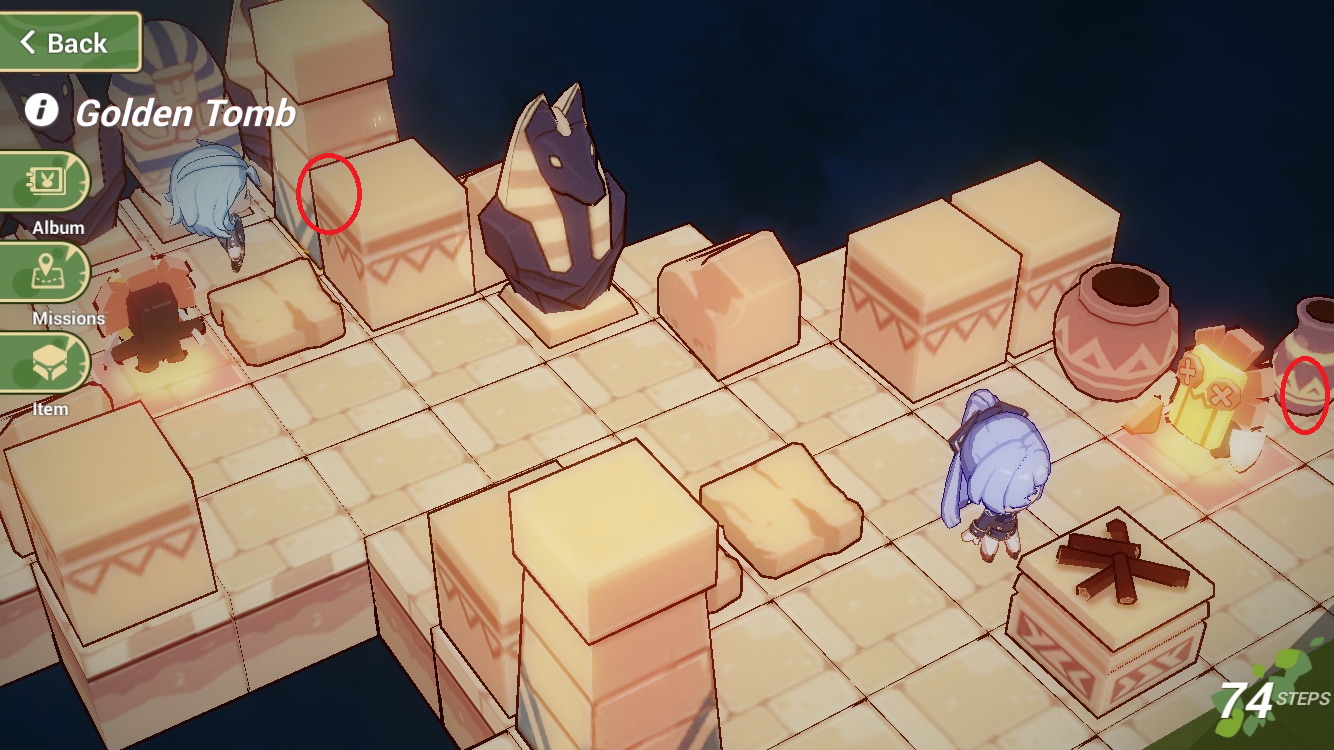 First thing you need to do is to speak to the glowing tile next to you. It will prompt a side objective on the floor. Walking forward, talk with Sakamoto Ryoma and receive some relevant information.. She will multiple times throughout the tomb. She will often be the key to moving forward, so speak to her whenever you can.

The main goal of Floor 1 is to find the portal to Floor 2. However, there are also several side objectives that will net you a few Bottled Notes, Tesla Coins, and Asterites.

First thing you will want to do is defeat the Warden next to Ryoma. The Wardens actually put up a fight but are no match for Kallen. Interact with the vase behind the first warden for the key. Speak with it again and you will be prompted with another side quest. For now, venture North and you will be ambushed by another warden. Upon winning, use the key on the “door” upon the glowing tile. This will unlock multiple paths on the floor. Go East and you will find Luna Kindred. Farther East will be the portal. However, before moving on, do not forget to pick up all the other treasures on the floor. 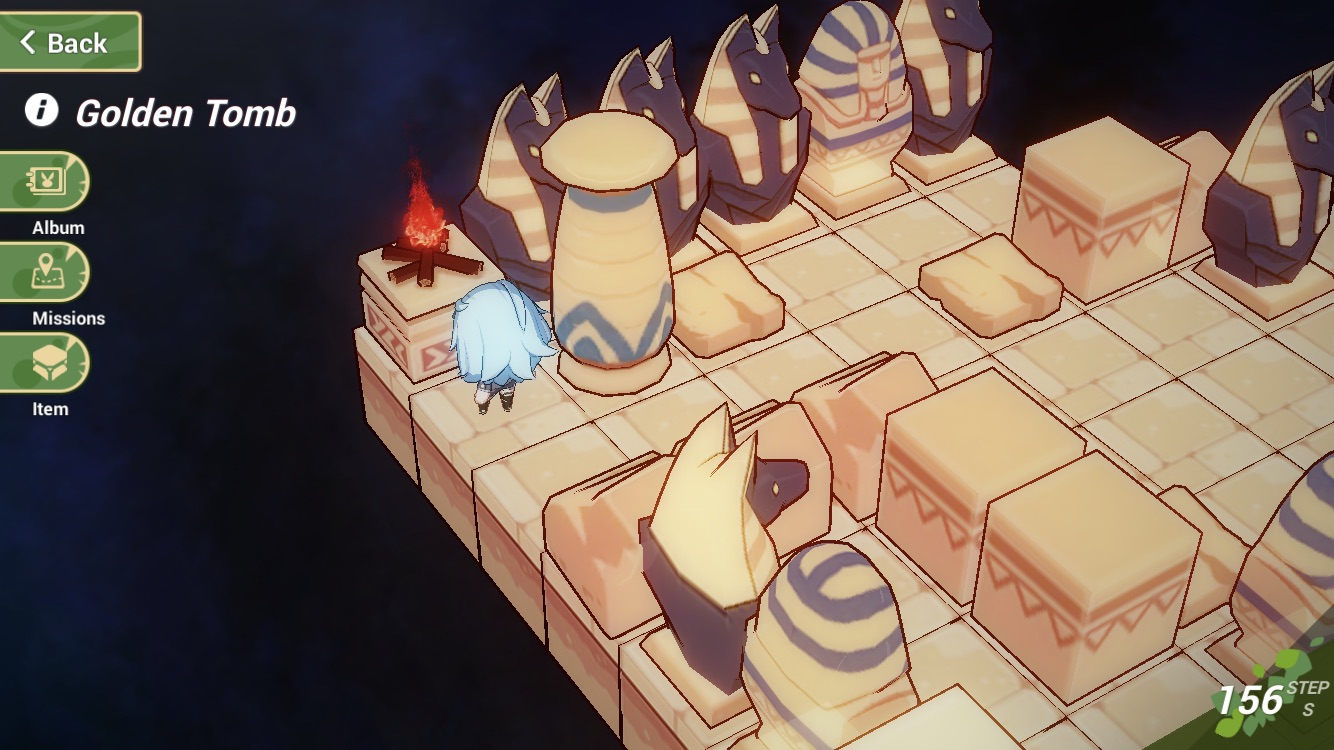 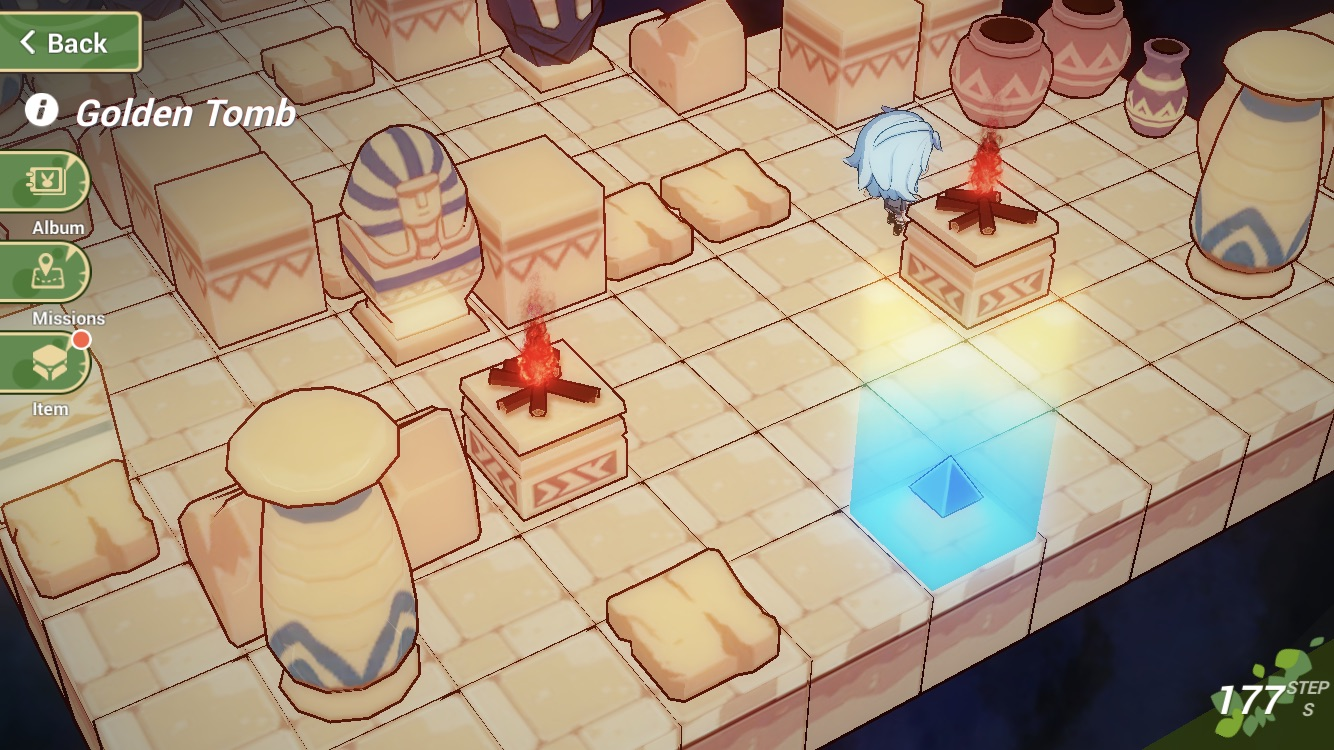 Go West of the torches and you will find the last warden. Talking with the statues, defeating the warden, and pushing the highlighted border will reward you another treasure chest. 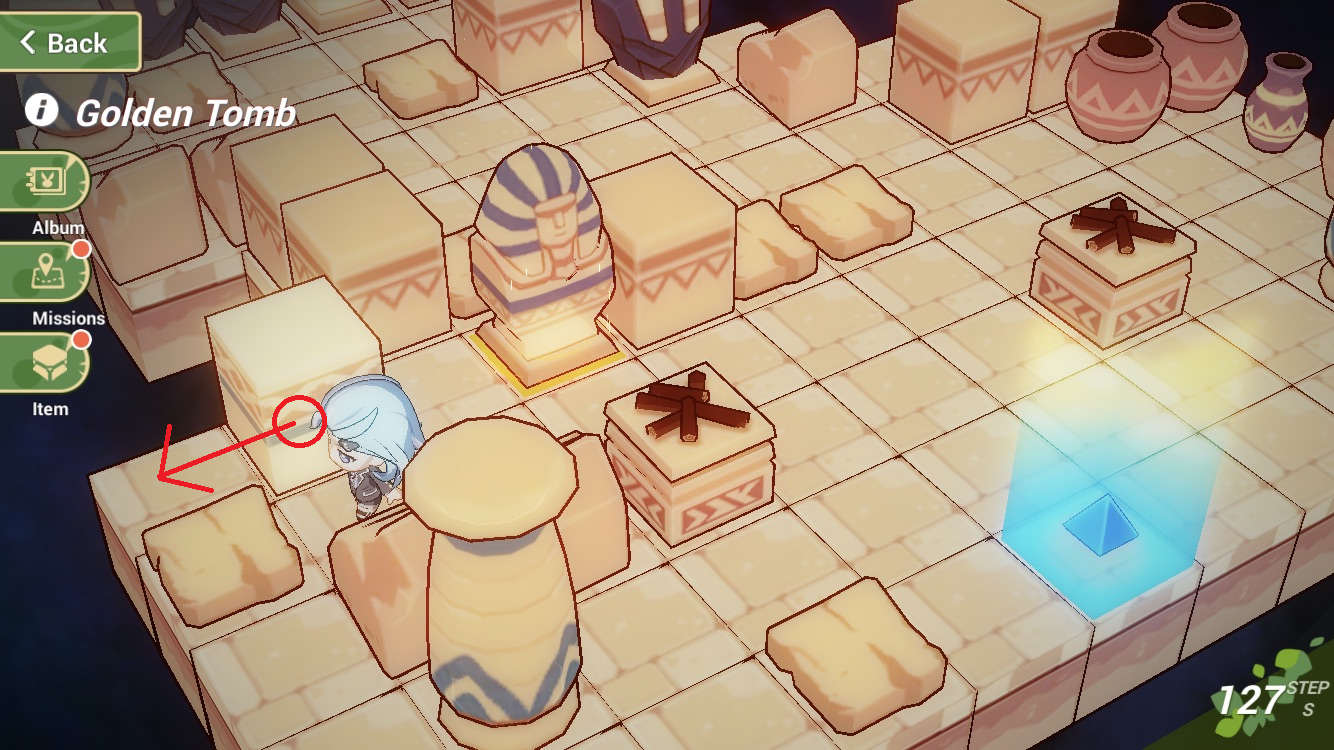 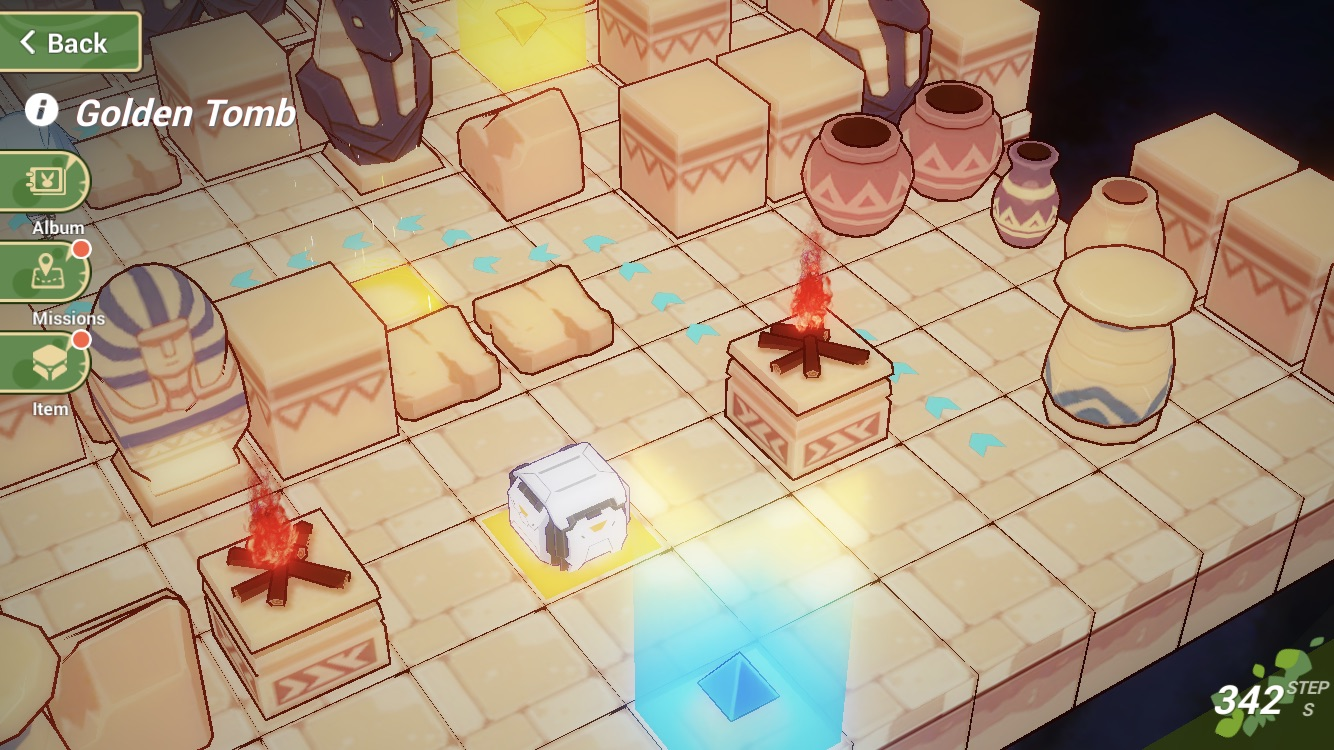 At the center of the floor, there should be a chest and a portal. Pick up the chest and enter the portal to find Dracula. Talk with Dracula twice. The answer to Dracula's quiz is 10 Anubis statues. Walk South and talk with Elizabeth Bathory. You will be rewarded for saving their marriage. 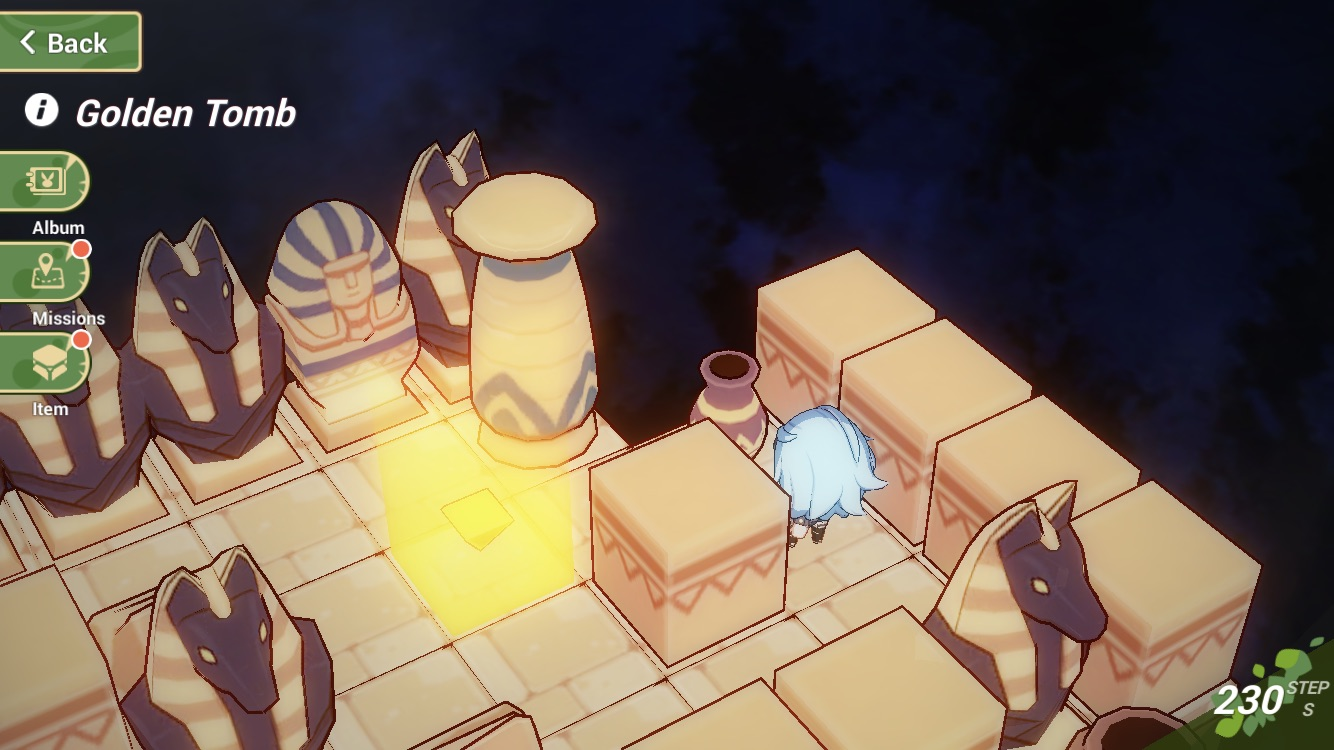 Finally, you are almost done with Floor 1. Return to the portal to Floor 2. Go behind it and break the vases there. You will discover one final chest. Now, onwards to Floor 2. 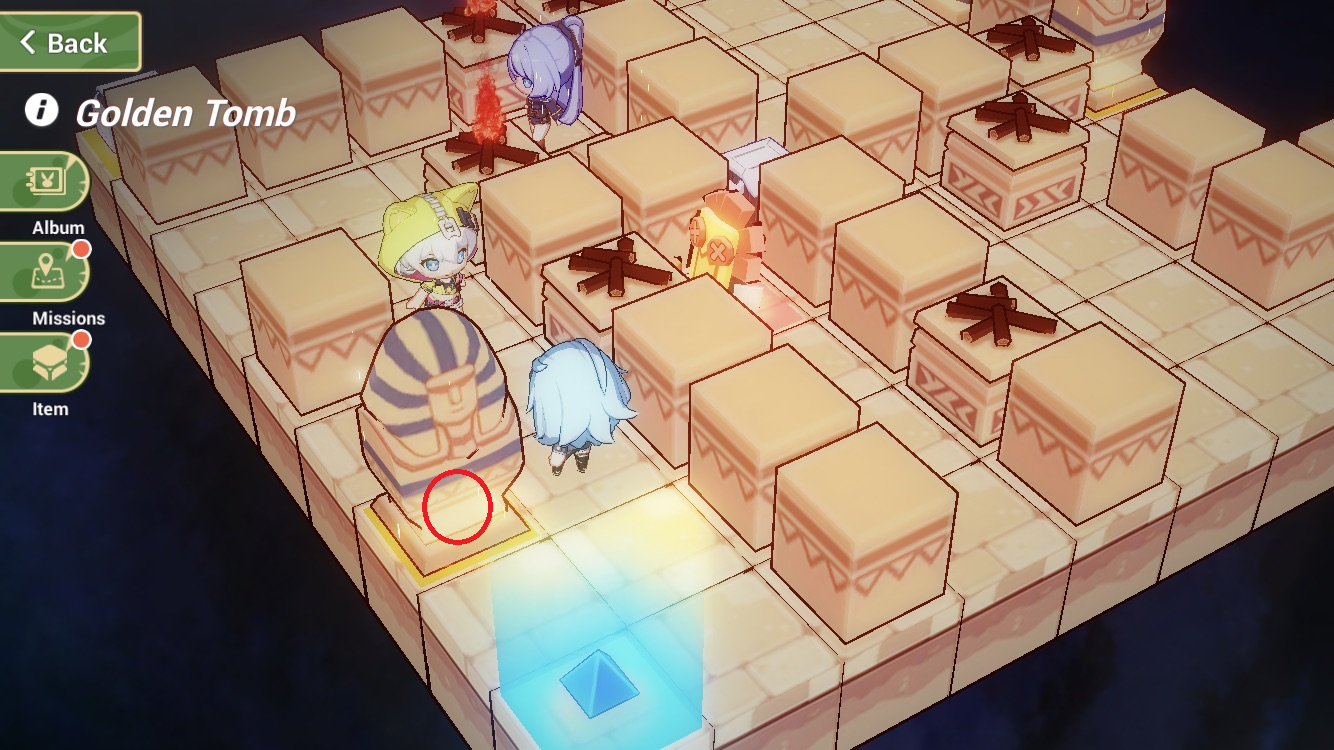 Start off by talking to Kiana. Follow that up with talking to Ryoma. Finally, interacting with the highlighted statue will rotate the Floor, changing the accessible paths. 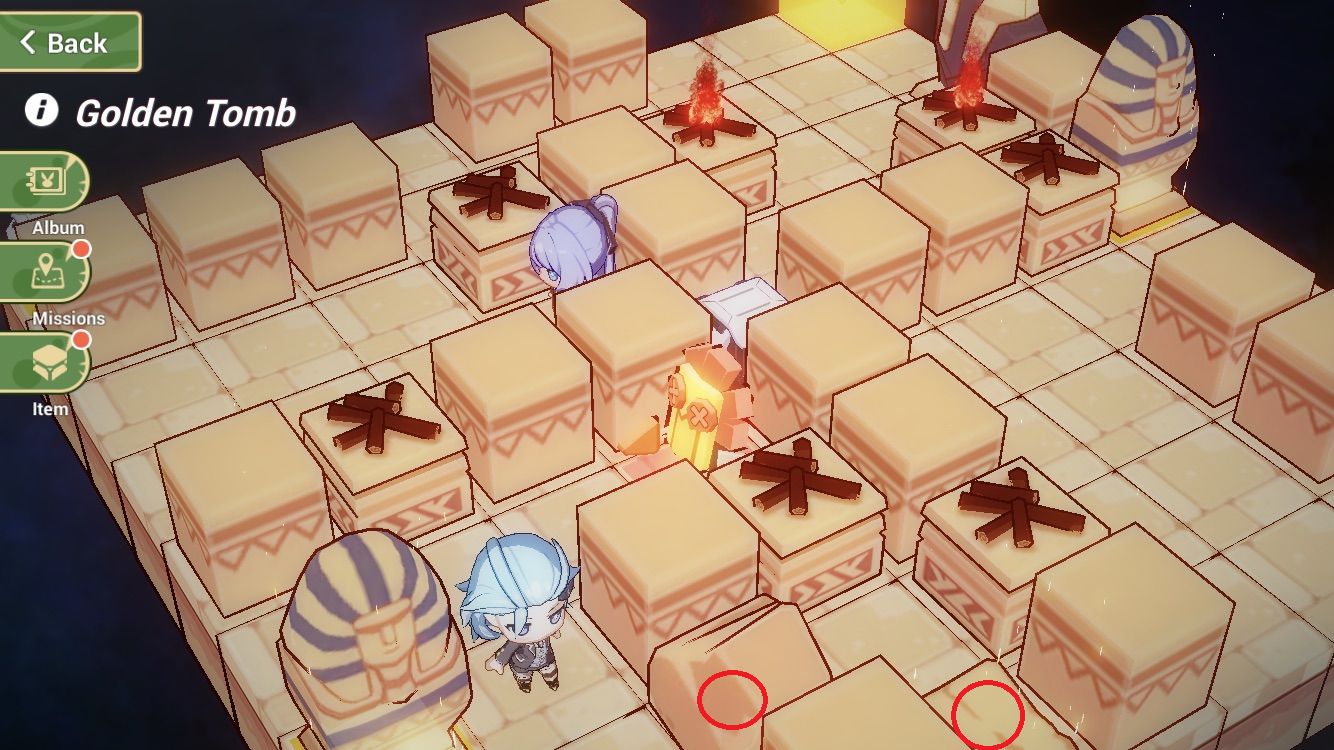 Here you can choose to fight the warden, an extremely difficult Dark Xuanyuan boss. This will be extremely time consuming and unnecessary. Instead, break down the highlighted rock and debris. Click the statue again.

Interact to the highlighted wall tile, Ryoma, and pick up the chest in the top left corner. Talk to the statue again when you are done. 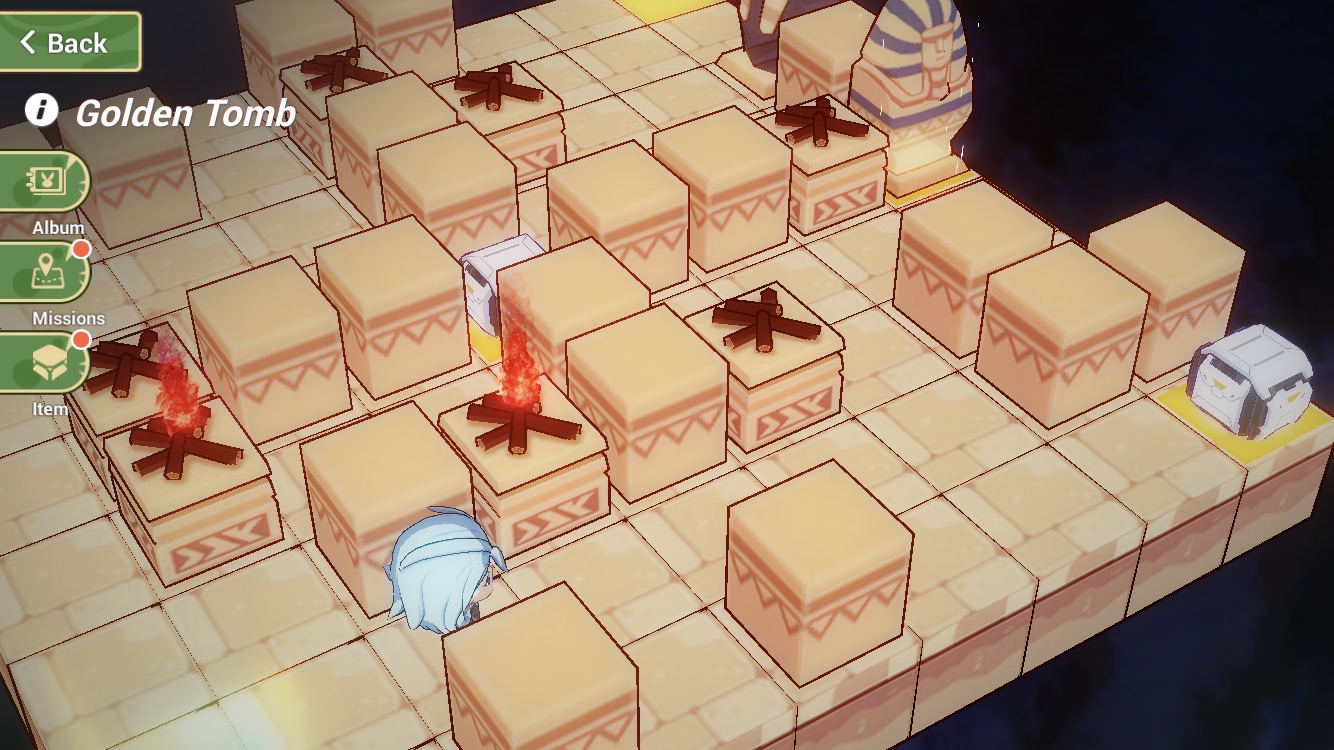 Now the warden is trapped and dealt with. Collect your chest, and talk with the Statue in the East. 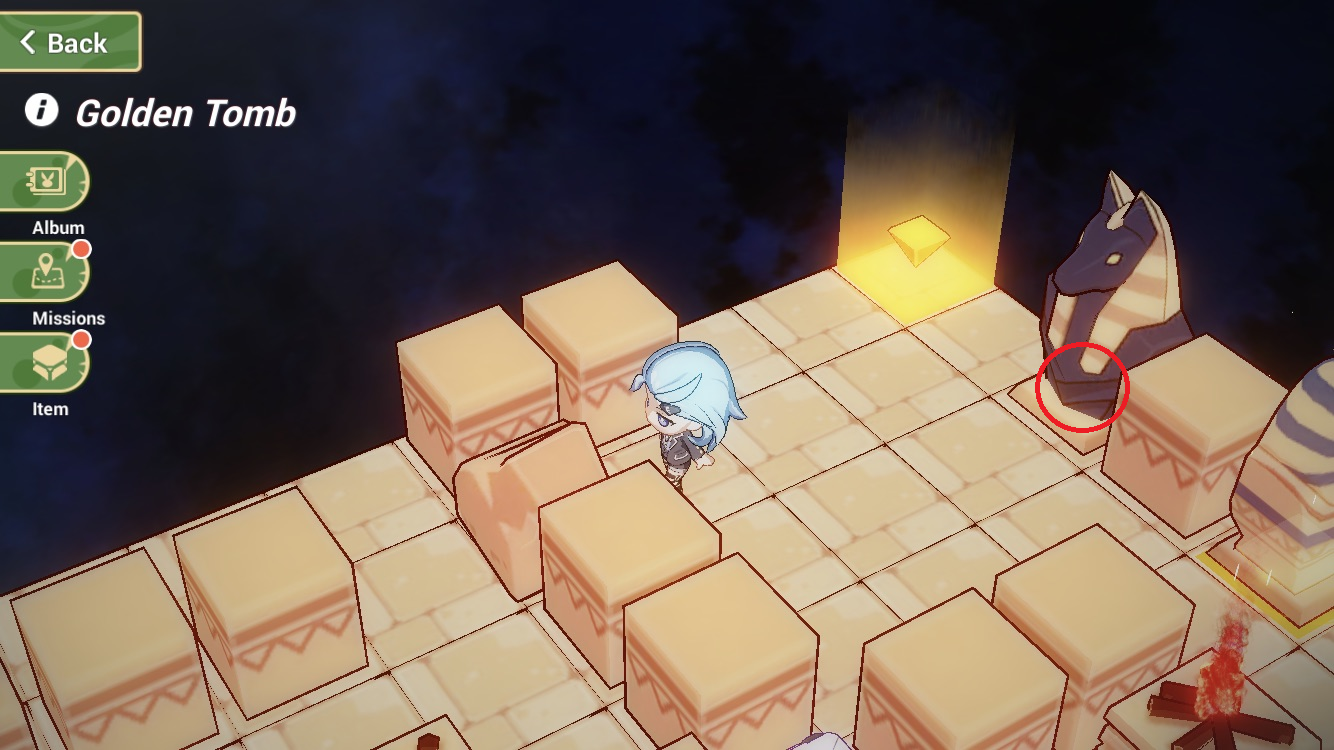 Talk to the Anubis statue, then talk to the Statue next to it. Finally, make your way back to the Statue at the entrance. Congrats, you are officially done with Floor 2. Onwards to Floor 3! 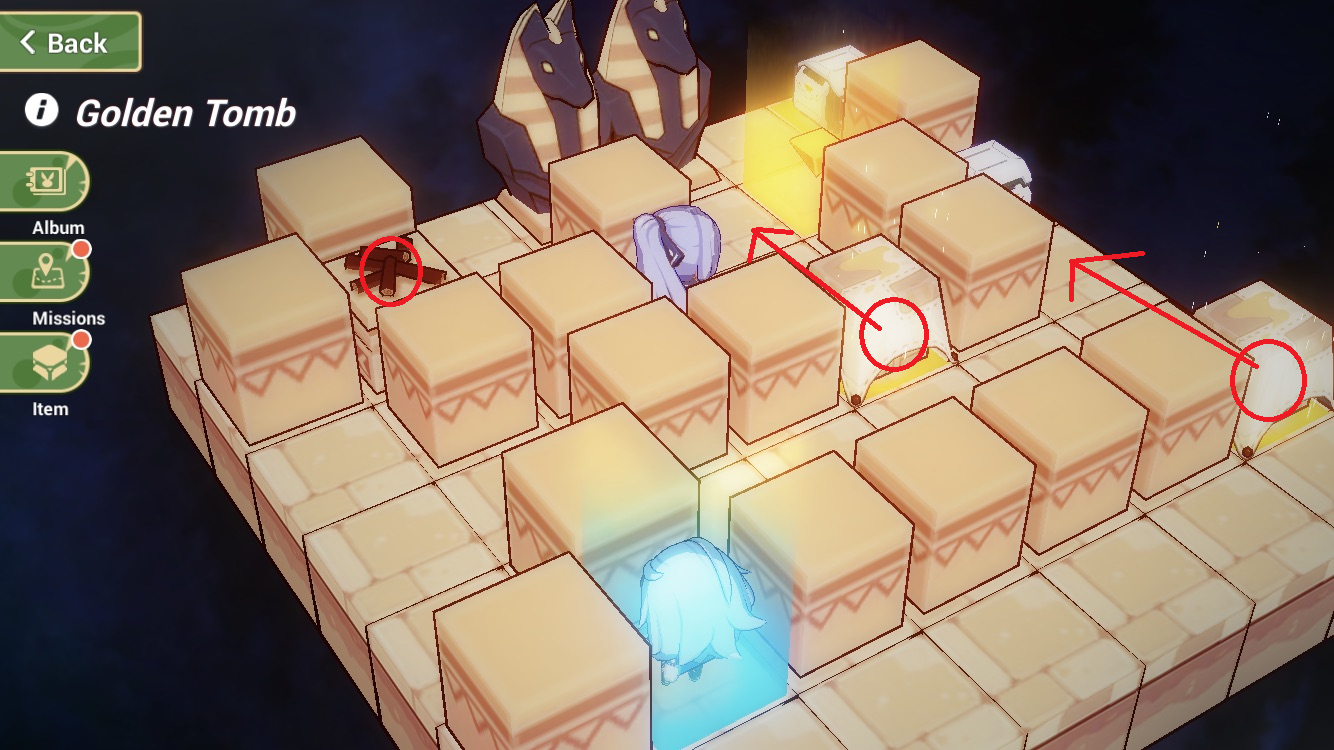 Floor 3 is much shorter by comparison. Start off by pushing the crates and make your way to Ryoma. Afterwards, talk with the highlighted fire, and return back to the entrance and speak with the Statue.

Collect the chest and make your way back to Ryoma again. Talk to the same fire again, then the Statue behind it. Collect the last chest and head to Floor 4.

Floor 4 will have a boss fight. Upon reaching Beach Empress Water Djinn, you will have some dialogue and two boss fights. They are not too difficult. In the first battle, Luna Kindred cannot die. Your second battle, will give you extensive buffs. Once you win, you can exit Golden Tomb.

EX-10 will be available after completing 3-9 Danger Cliffs. You will have to battle against swarms of Bitey and Masked Braves. You need to kill 30 monsters but there is a catch, only Bombs will damage them. I would recommend using a Machine gun Chibi for easier sp regen. This one can be quite tedious as you kite around and wait for bomb cooldowns, however it is not too difficult. You may use Ancient Dryer quest item in the fight as well. After defeating the monsters, they will direct you to the next point of interest, EX-11 The Oasis. 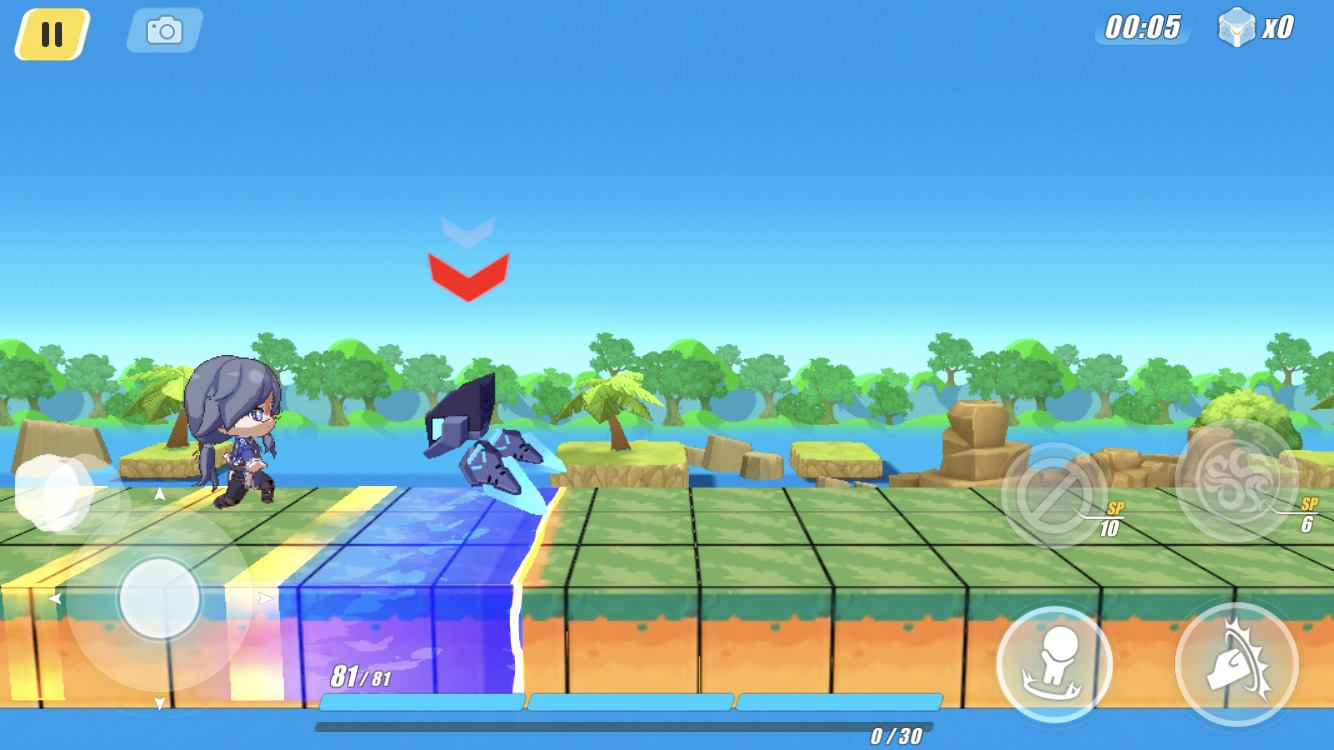 EX-11 The Oasis will be unlocked after 3-11 Treasure Raider. The Oasis will have you confronted by Liliya, who has been setting traps, in attempts to catch the Captain, and unintentionally, much of the wildlife. It is time to give chase the only way you know how, via rhythm game.

After beating the rhythm game, Liliya retreats to EX-12 Final Stand, which will be unlocked after 3-12 Last Stand. Here, you will have some dialogue and see Liliya reunited with Rozaliya. Unfortunately, the rest of the plot will remain unresolved until Odd Drifter Side B. 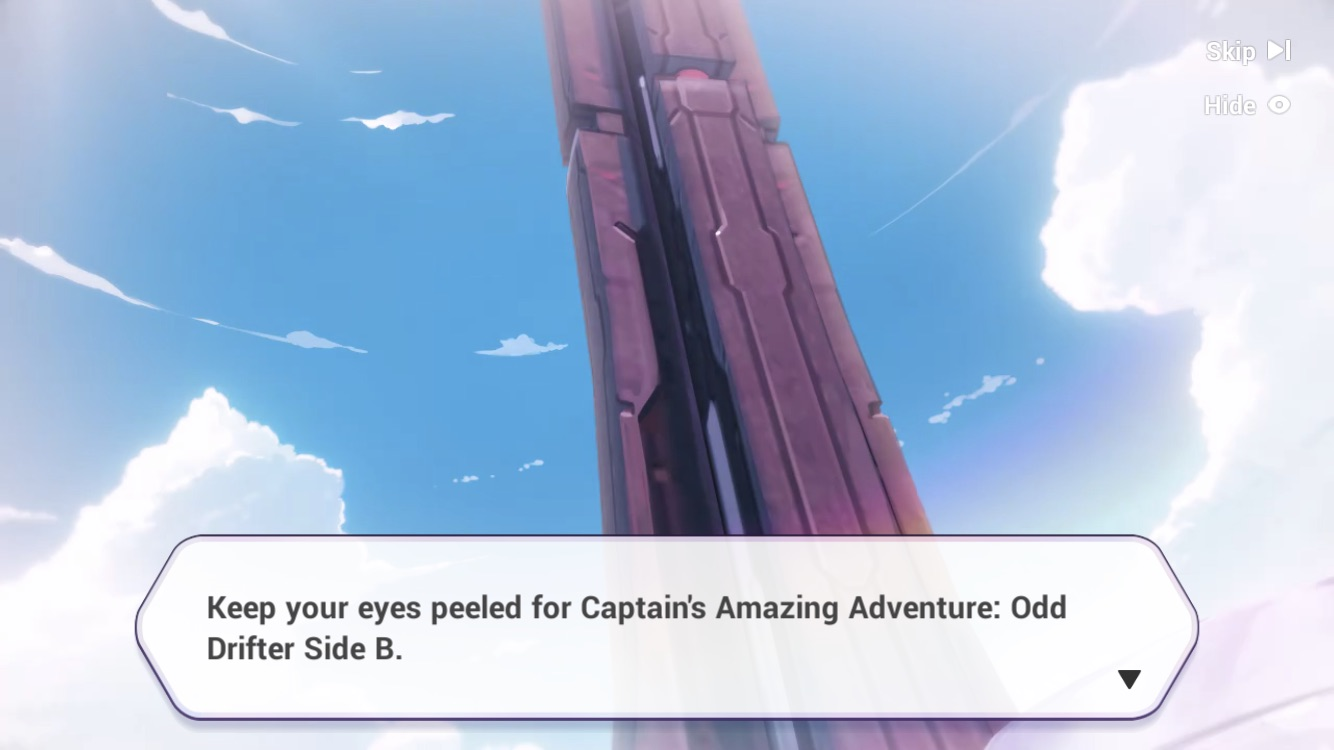