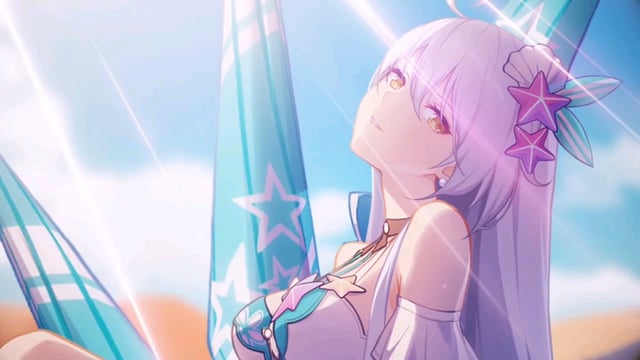 I don't like sand. It's coarse and rough and irritating and it gets everywhere. However, as the Captain, we must press on to unlock the mysteries of this island.

As you journey from 3-1 to 3-8, you will have to overcome many challenges, they come in the forms of third-person shooter stages and Desert Ark which consists of multiple floors of puzzles.

The Desert will be filled with predominantly Psychic type enemies to fight your Chibis, this means it is time to whip out those Biological Chibis in your roster, and you should have plenty of options to choose from, including Lightwing Unleashed, Yae Sakura, Night Squire, and Luna Kindred.

Most of the shooter stages should be easy and after surviving Beach and Village, you should all be veterans by now. You will see the usual Kill 50 enemies, and Protect the Objective type stages. 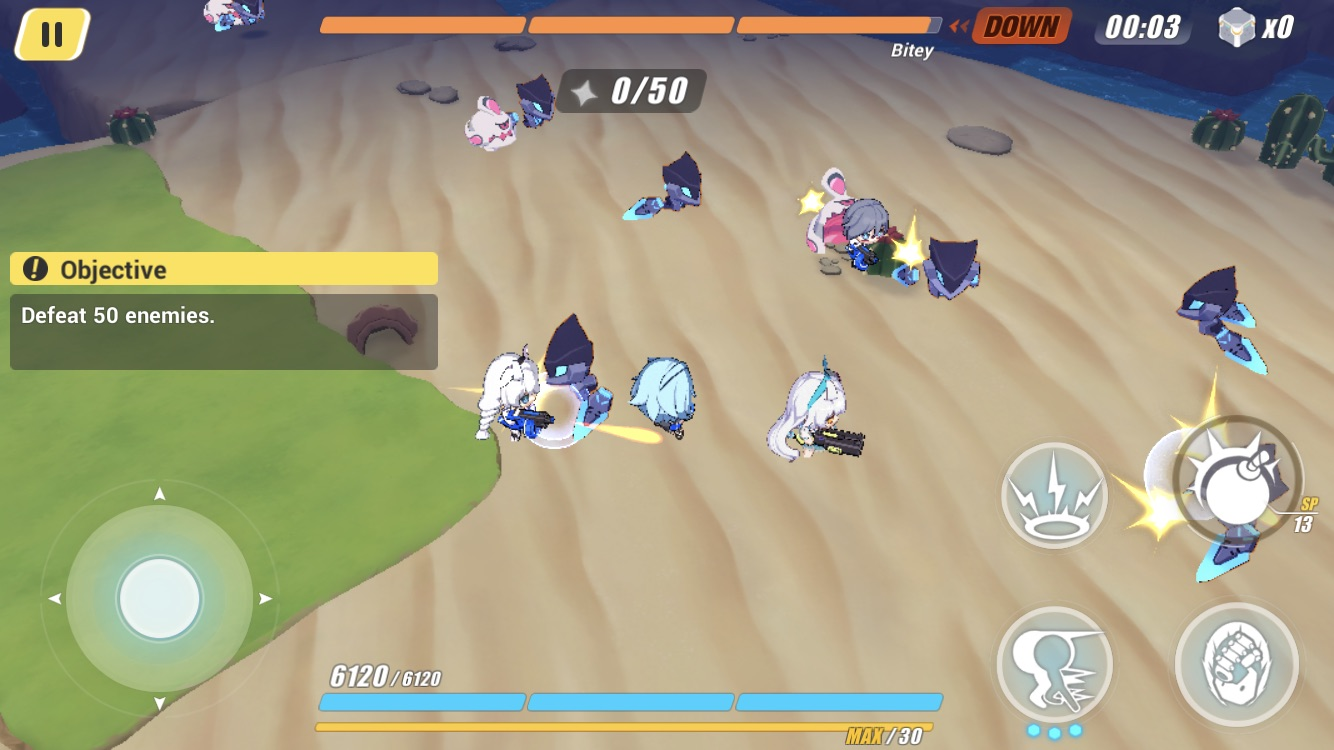 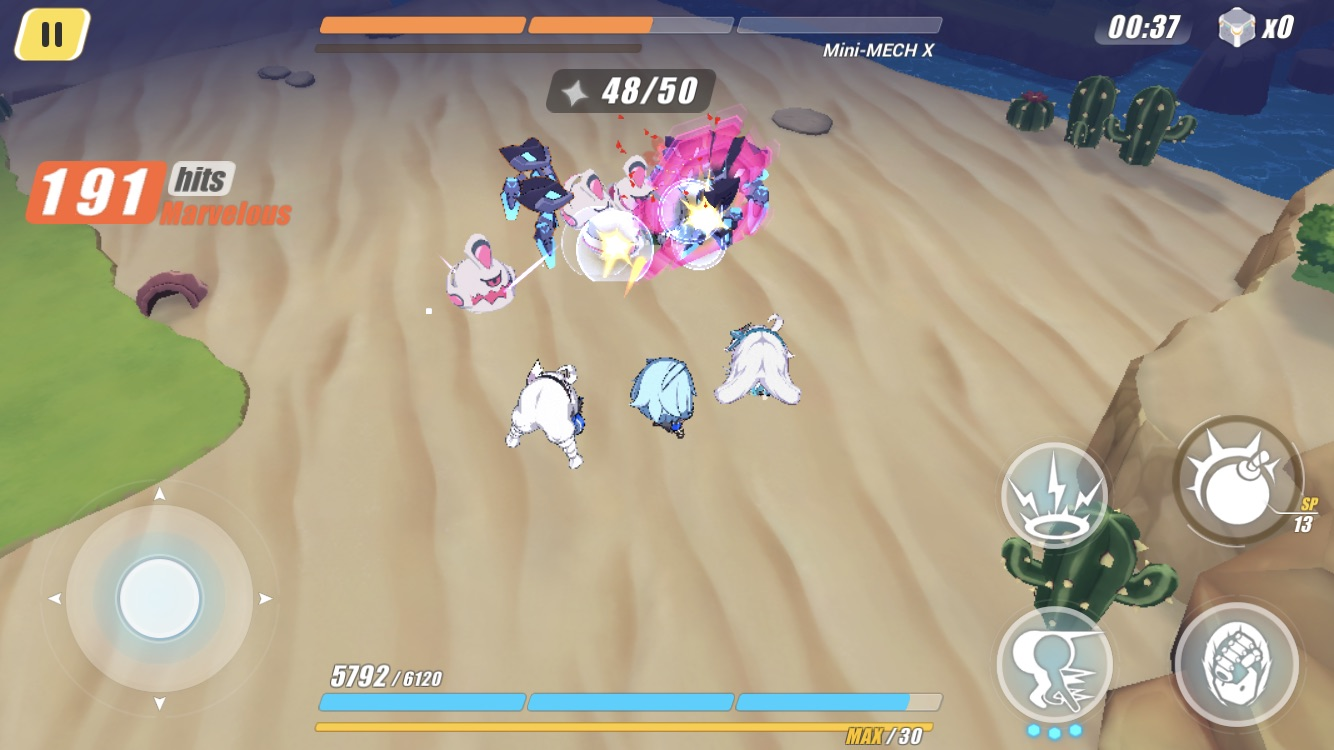 Protip: In certain stages, there is a cactus right next to your spawn. Stand still for the first several seconds, and one of your teammates will be stuck on the cactus. She will act as the bait and the mobs will naturally gather around her for an easy victory.

On map 3-5 Sand Jäger, it will be the previously seen Collect 5 Meats stage but this time, you will need to lure a Biter into a trap and collect once they have fallen for the bait.

Map 3-6 Mirage, will showcase a boss round featuring Cutey. Cutey is a Psychic type boss, and have multiple move sets.

Cutey will have a charge attack.

Cutey will have a spin attack.

Once at around 50% HP, she will put up a shield to reduce incoming damage for a duration.

Overall Cutey is an easy fight and we will be seeing more of her in the side quests. 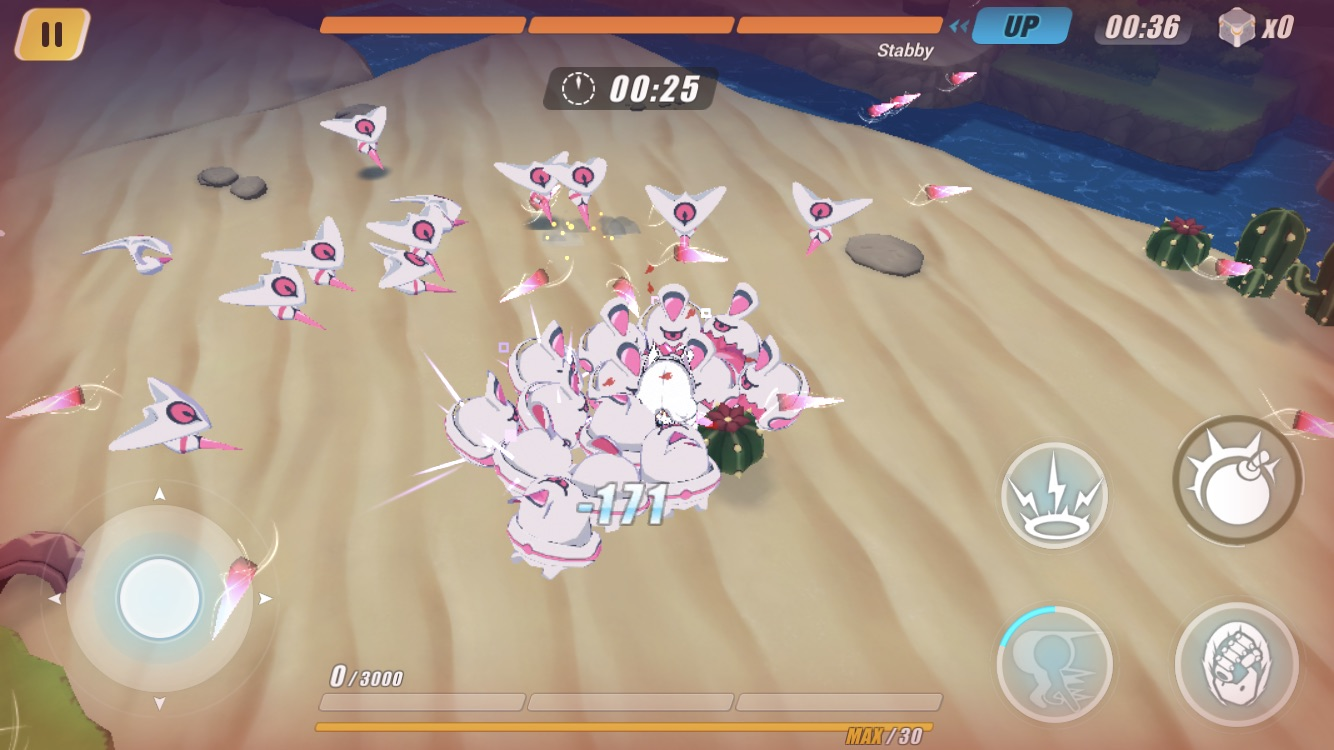 Map 3-7 Same End, is actually slightly difficult. The goal is to survive for 60 seconds as an onslaught of Biters and Stabby come attacking. Stabby is especially annoying as they have split shot, shooting three projectiles in different directions which can quickly get overwhelming. The best advice I have for you is to keep track of your cooldowns, for the paralyzing trap, the bomb, and most importantly, your evasion. Do not back yourself into a corner and always keep at least one evasion charge handy.

This puzzle-centric map is reminiscent to Fairytale Rhapsody event and Yae's Village from the Village section. It will consist of three floors. 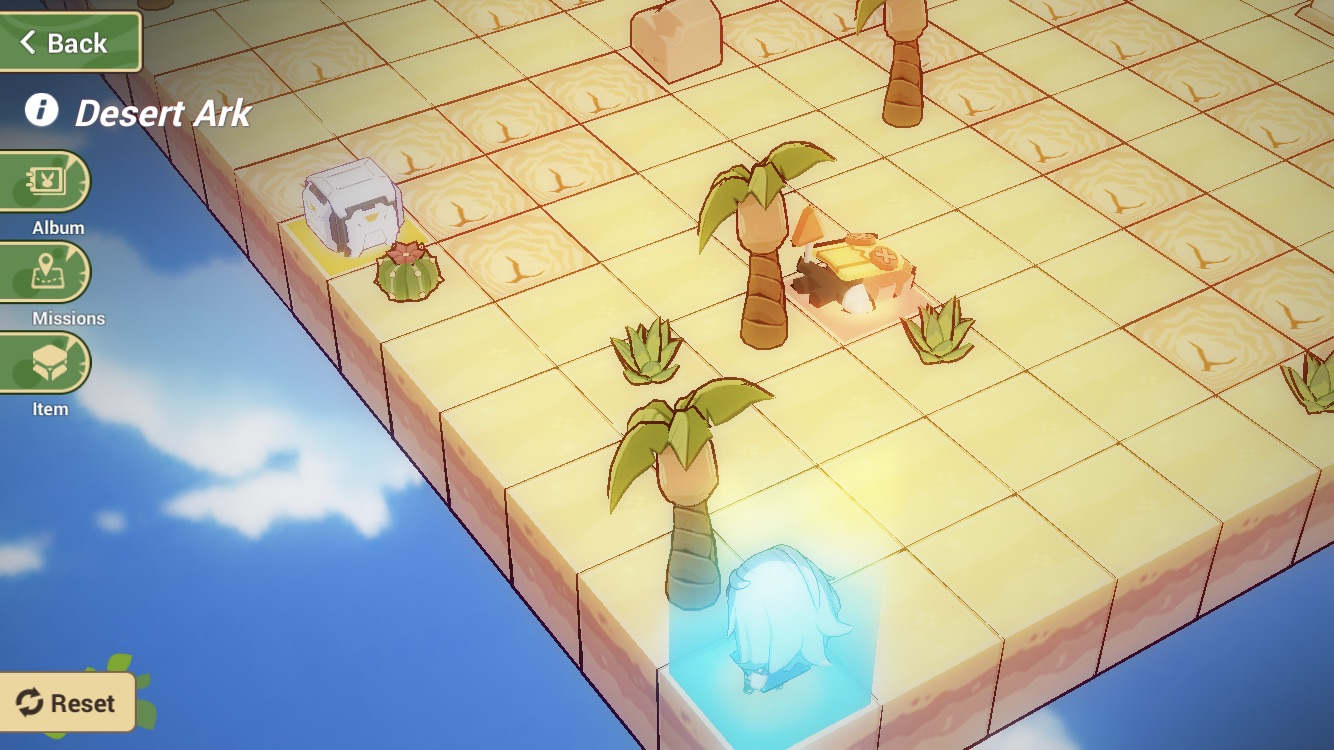 First thing you need to do is to talk with the dying Colossi of Mesir. This will lead you on a quest for water. Go North to the first lake and you will quickly realize it is a mirage and the prompts will lead you East.

Here you will be confronted with an army of cacti, plus one sphinx (needed later). 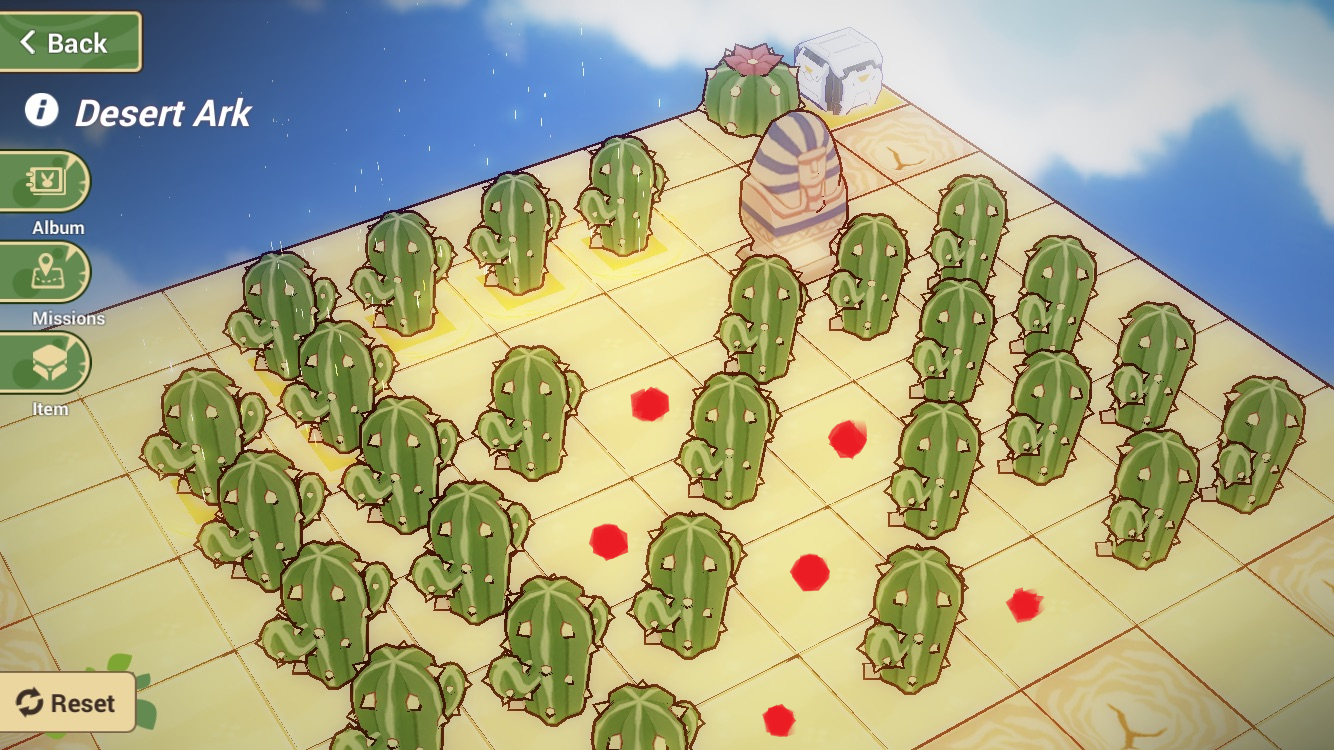 You may always hit Reset on the bottom left if needed.

The ones standing on glowing tiles can be pushed. Your goal is to push them into place, marked red on the previous picture, to complete a full line of cacti. This will spawn a tree. Sincerely clicking the tree twice will give you access to water. Return to the first Colossus. He will reward you with a shovel. Use it to break the cactus blocking the chest next to you. 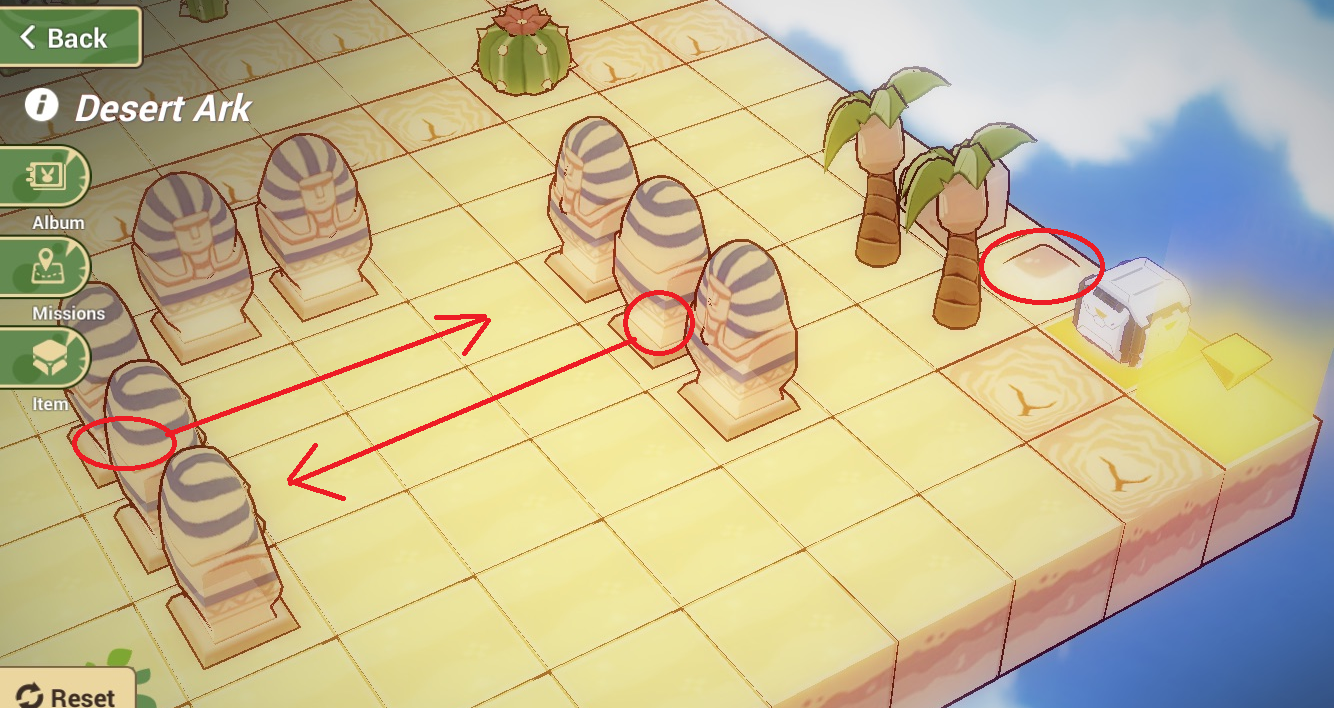 Make it so they all face the center. The two sphinx highlighted above needs to switch places, so move them as the arrows indicate and push them into the other's original spot. Finally, the top right open spot should be filled as well. Go back North and push down that last sphinx.

After this, you will summon a mega sphinx. To continue, you need to repeatedly click on it to answer 3 riddles. The riddles are very easy but if you need help, the answers are “Sun,” “Memories,” and “Death.” After answering the riddles, click on him again to gain a reward as well.

Lastly, notice the blob of sand. Click them whenever you can, they will continue the plot and  can be key points in puzzles.

Start off by talking to the blobs of sand. The one in the middle is Kallen and the bottom left will give an Elixir to kill a cactus to move forward. Now you will be introduced to the sliding tiles, which is the main puzzle for the rest of floor 2 and 3. But first, beat another Colossus and go East. 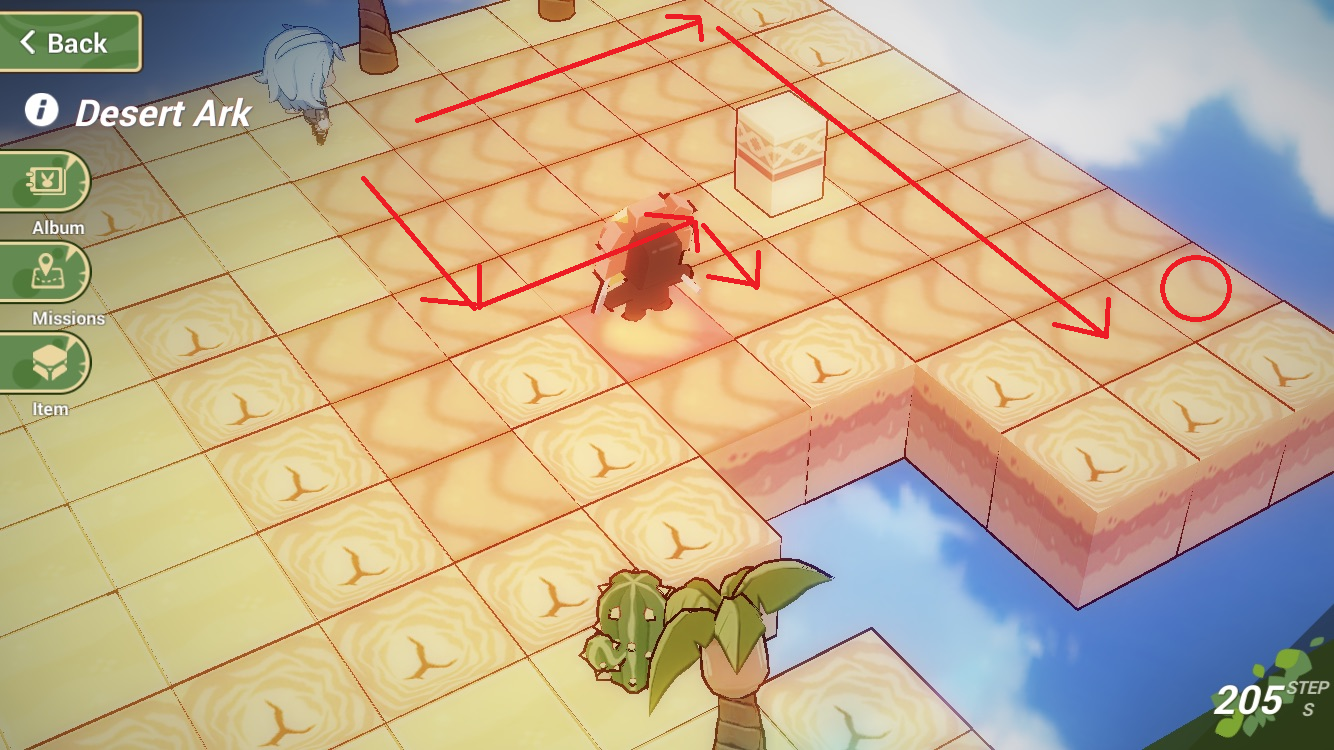 First thing you want to do is collect the chest on the bottom right (red circle, I already collected it).

Next, talk with the next Colossus at the center. This will prompt you to collect five Cacti. The first two is towards the start of the floor and easy to get. The other three are inside the sliding maze. There is also a blob of sand that will spawn a pillar at the top right which is needed for a cactus. Refer below for instructions. 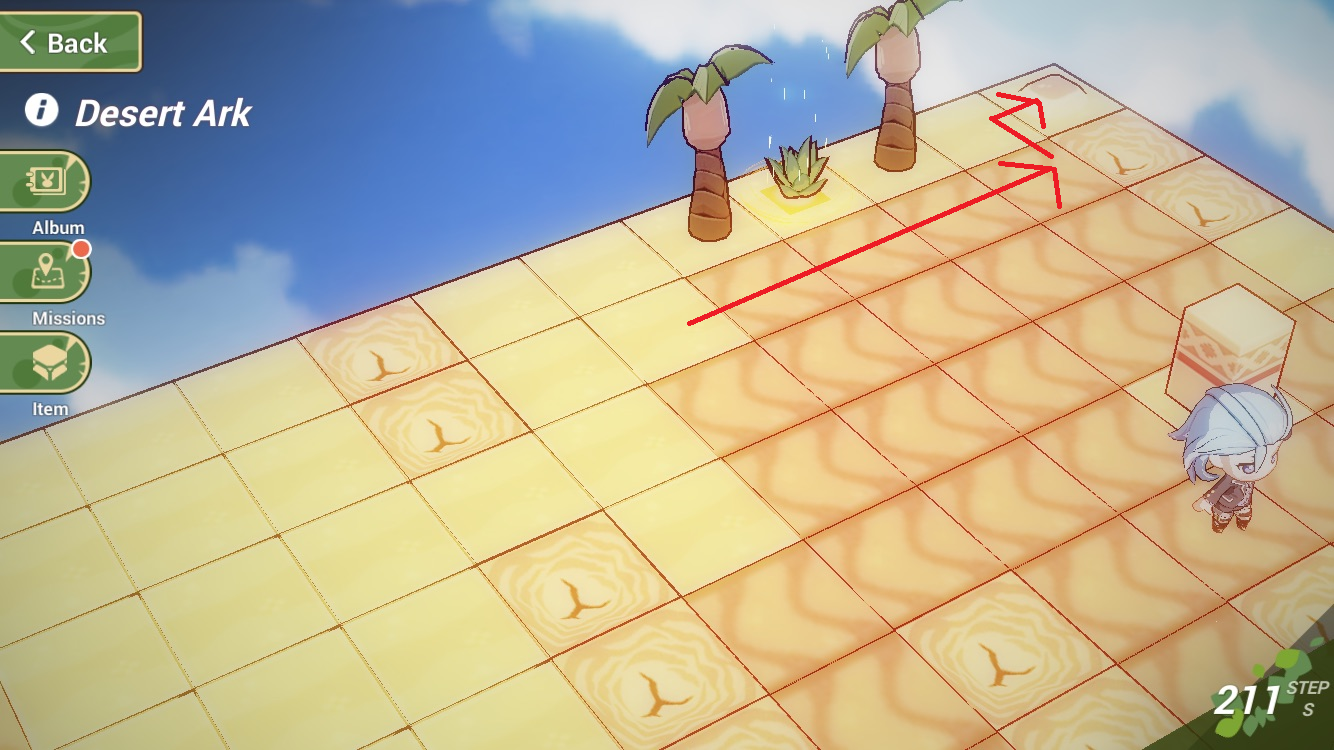 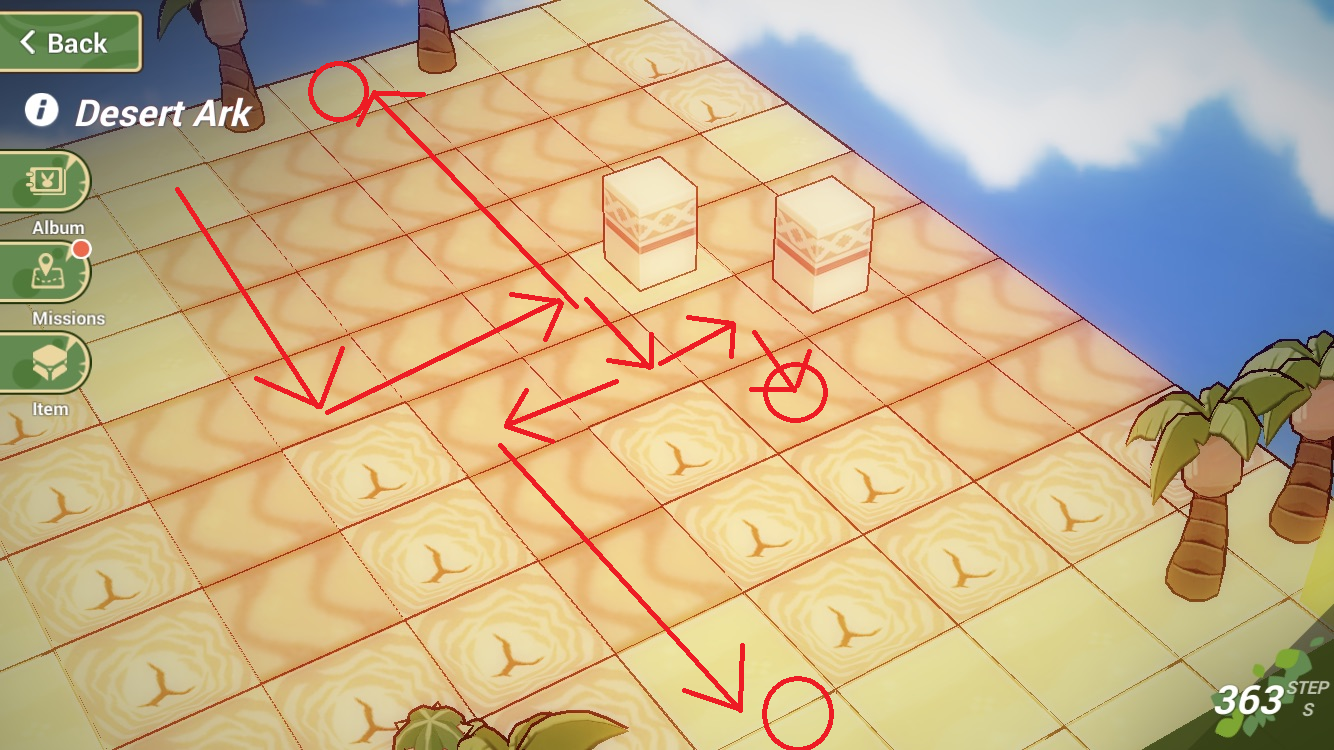 Red Circles indicate where the cactus was.

After all of that, you will talk to the Colossus again and move to Floor 3.

It is time to find the source of the Colossi' woe, and it is none other than God Kiana… or Beach Empress… or is it White Wytch…. It will be a sliding maze again and here are the steps to find her. There is also a chest and a colossus in the top left and right corners respectively. The square shaped sandbox also has some interesting dialogue. 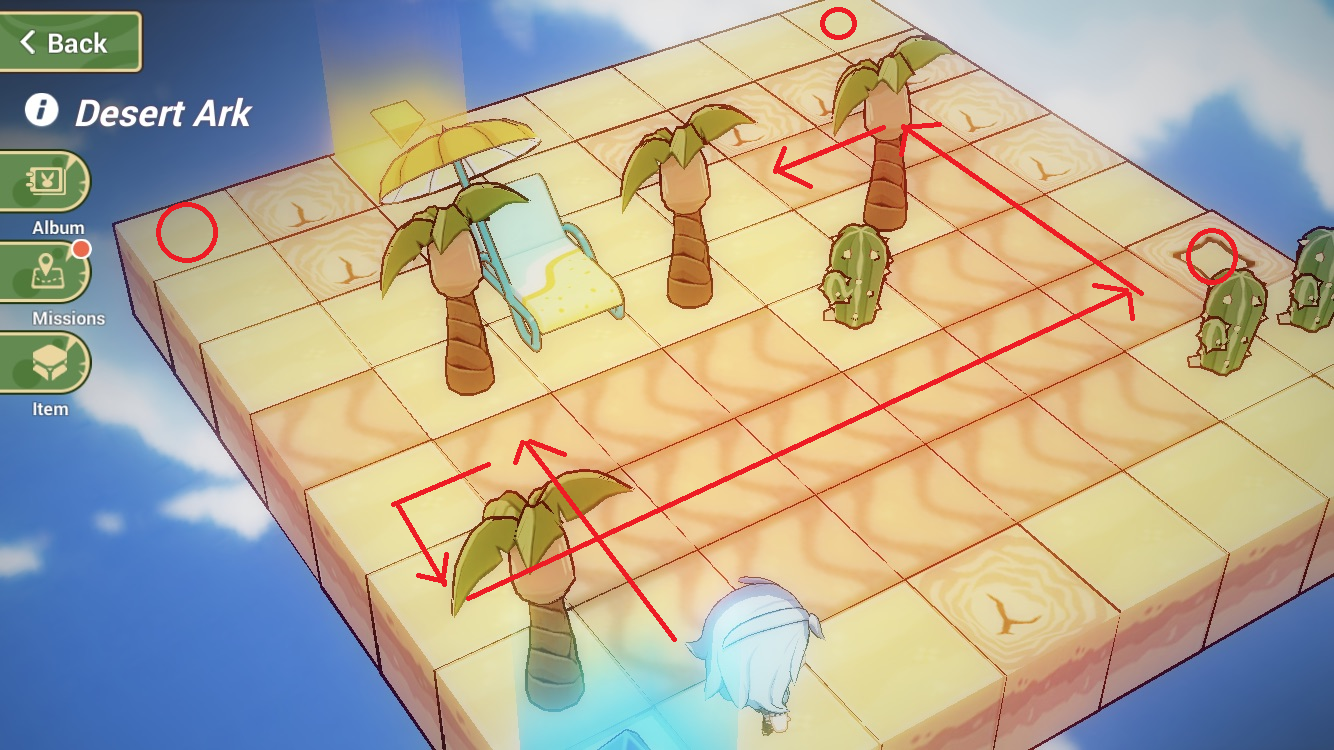 Upon reaching Beach Empress, you will be able to battle her and Benare. Beach Empress will take no damage but after a duration, she will leave and summon Benare. Defeating Benare will mark the end of Desert Ark. Talk with the last Colossus and exit.

EX-7 Lethal Sights will be available from the start, but will only move forward in plot if you have at least completed 3-5 Sand Jäger. Arriving to this node will have a sand statue Roza direct you to EX-8 Little Pyramid. 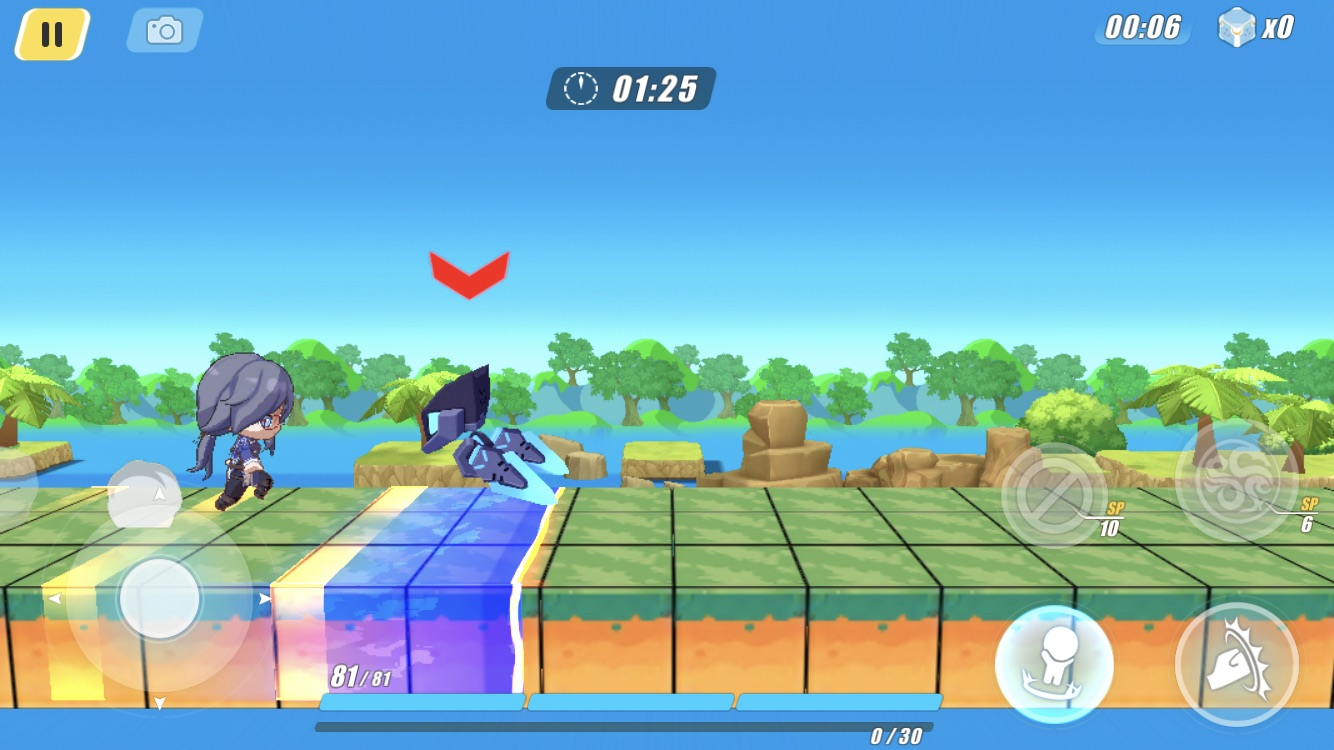 EX-8 will have have two rhythm games, seen before in the Village. There is also dialogue chooses but do not seem to have much effect in the progression of the quest. 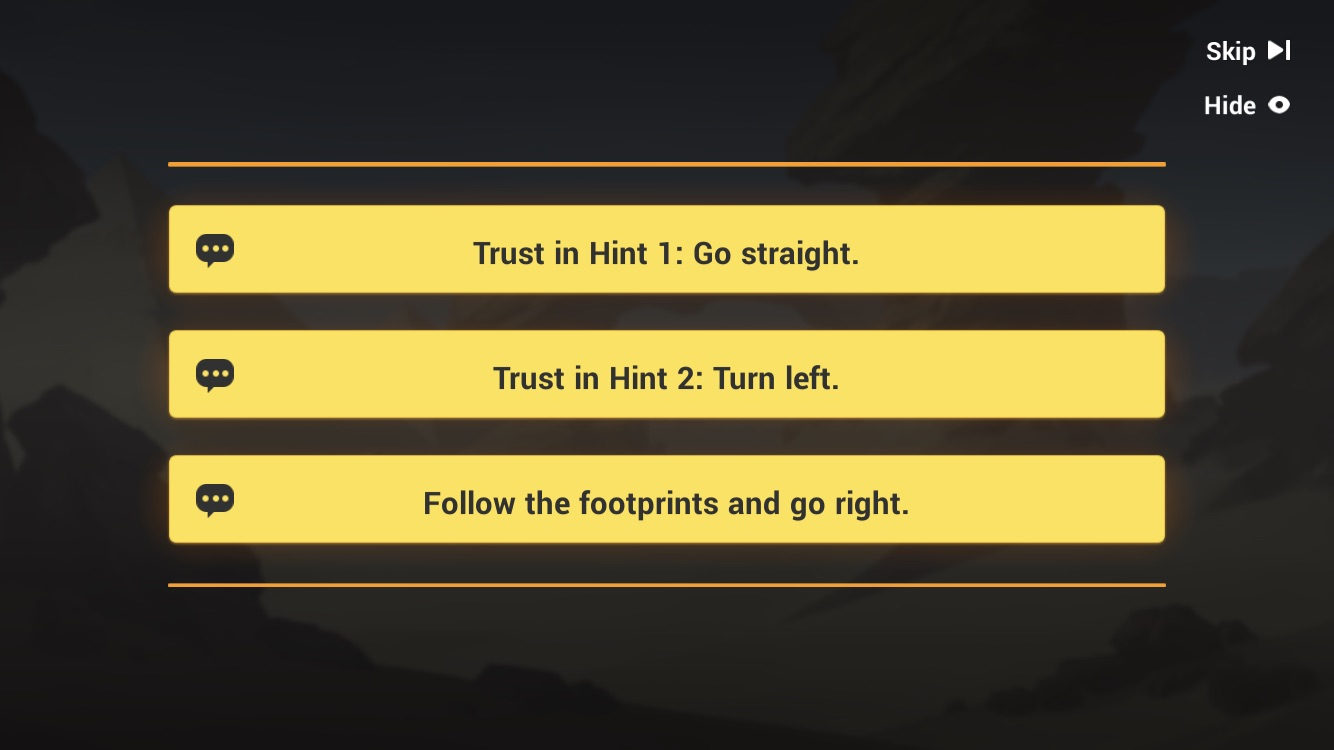 I have chosen the 3rd option both times. You will exit Little Pyramid with a new quest item, Ancient Dryer.

Return to EX-7 and commence the “hardest” boss fight yet. You will be facing off against all three bosses so far discovered, including Cutey, Masked Giant, and MECH Combi: XYZ.It is not very hard but it takes a very long time because of their high HP pool.

The Ancient Dryer also can be activated to keep the bosses away. Just keep kiting and spraying until you win.

After a hard fought victory, the plot ends here for now, to be continued in Part 2.

There is still EX-9 Sand Pit, which will be accessible after 3-7 Same End. Whether this ties in to the overarching Rozaliya/Liliya plot remains to be seen. However, Kallen is eaten by a Cutey and you must save her by fighting two Cutey at once. They spawn some minions periodically but is overall not more difficult than what you have faced already. You can use the Ancient Dryer in this fight as well.