Hi all, today we are bringing to you a quick first-look at the new Summer Event, Odd Drifter.

The Event can be accessed through either the mini-icon in Main Menu, or the Event Tab, and unlocks at Captain Level 20. Round 1 lasts from today (Aug. 16) to Aug. 31st. All excess Event Currencies (Tesla Coins, Bottled Notes, etc) will be recycled on September 2nd, 3 days after the end of this round.

The Event consists of a series of stages where you fight various enemies in a top-down shooter style minigame. In addition, it has several extra stages where you must fight regular enemies using your regular Valkyries.

After clearing the first few tutorials, you will gain access to the full arsenal:

Tip: Bombs and Traps can be used near enemies and will be immediately triggered. Otherwise, enemies must come into contact with them before they will activate.

In 1-10, the Stage tasks you to “collect flour” but without clear instructions. 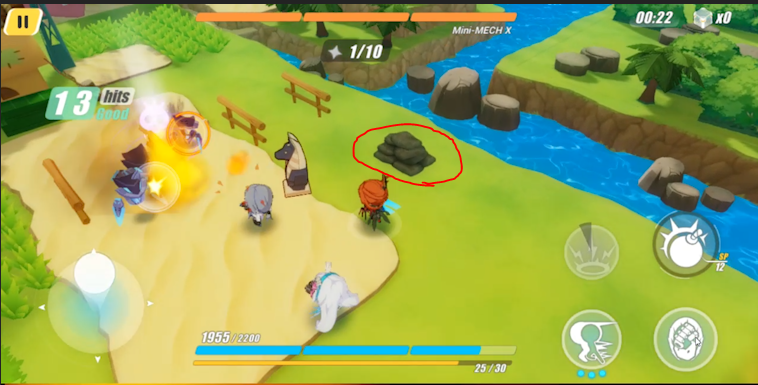 The item circled here is the mentioned “flour,” and the blue pointer below your points to the next sack of flour. Only one sack spawn at a time and they often spawn far apart.
EX-1, Basement Quest Chain, and Boss-Fights will be explained in further detail in later sections.

Isle Survival and Resource Gathering are REGULAR stages that you partake with your existing Valkyries.
In Isle Survival, you will score additional points by using the Uprate valkyries. The stages themselves have no objective and no time limit, but they do have an effect that will drastically improve the efficiency of your Valkyries. (You can check that stage effect before deploying)
Since there are exactly 7 sets of Isle Survival stages, you can secure 10500 points without deploying any Uprate Valkyries or resetting on any day. However, deploying Uprate Valkyries may save you some runs toward the end and consequently some stamina.
Resource Sites allow you to secure additional Tesla Coins and Notes every day, and each site can be run 3 times. Similar to Isle Survival, they have no objectives or timer.

Sir Gacha is where you get new Tactical and Support CHIBIs by rolling Tesla Coins in a slot-machine fashioned way.
The first 9 rolls will guarantee giving you 3 Lightwing Unleashed, Night Squire and Vermillion Knight, regardless of how you pick. This will provide you exactly enough “Firepower” to pass the 10-Star requirement for Level 1-9.
Afterwards, you can roll on Support CHIBIs in addition to new Tactical CHIBIs.
Overall, the Chibis appear to be divided in three rarities: Common, Rare, and Super Rare.
Their rarities are not explicitly stated, and the only way you can find out is to check their stats:

Currently, the only non-common characters I have personally encountered are Kaiserin (GK), Einstein, and Dress-Maru.

With that in mind, I recommend that you try to get the rarer (thus stronger) Chibis whenever you see them, and focus on starring up Tactical Chibis and getting new Support Chibis. It is recommended that you aim for at least 1 4* MG Chibi and 1 2* SG Chibi (Bonus points if it’s Kaiserin), and then as many different Support Chibis as possible. This will come in handy for the two Super-Hard stages (EX-1 and Basement).
Since you can only field 4 Tactical Chibis (and in some cases only 1), it is better to have a small roster of strong Tactical Chibis than a wide roster of weaker Chibis. On the other hand, there are no limits to how many Support Chibis you can field, which makes getting new Chibis more appealing.
In addition, higher Starred Chibis give more Bottled Notes in Collection, making having multiple highly-starred Chibis at the start even more appealing.

The Isle Gathering will produce additional bottled notes twice per day, for up to 600 notes. 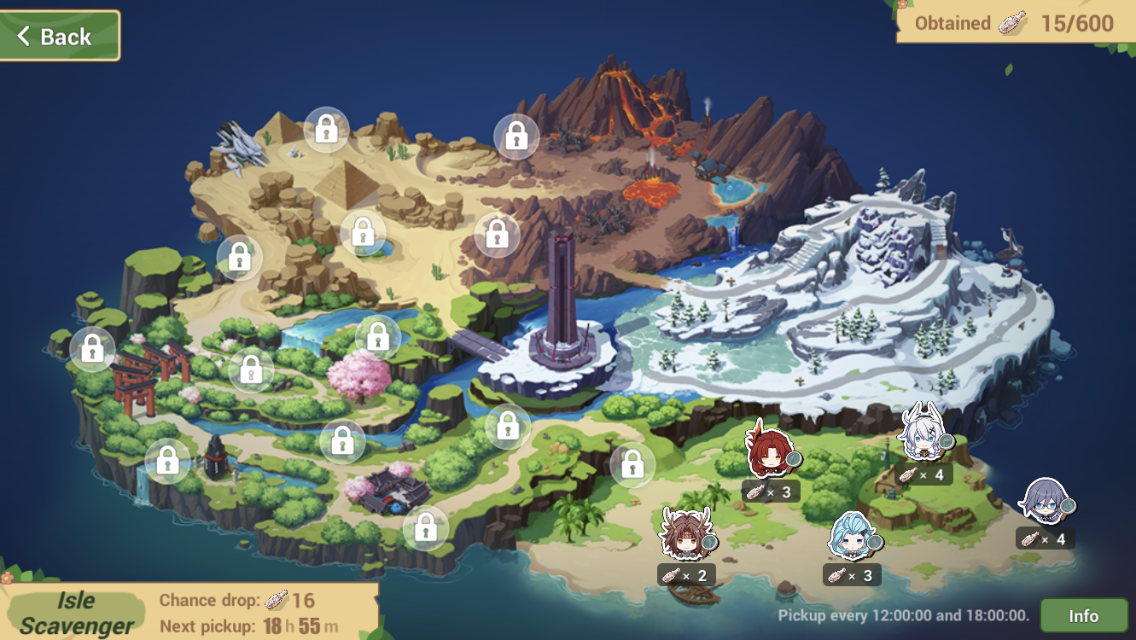 For now, you will only have up to 5 sites unlocked, and it will automatically pick your highest-starred characters to gather notes.

There are a total of 4 relatively difficult stages, the 3 Boss stages and the EX-1 Stage.

The Mecha Boss features Laser Attacks and Rocket Attacks, both of which are clearly telegraphed and gives you ample time to evade. However, they do hit punishingly hard and could lead to a quick demise if you are not careful. It has an ability to temporarily construct a shield which drastically reduce all damage taken.
My recommended strategy is to stick to one side of the map, where lasers cannot hit you, and keep spamming the boss down with Bombs. Evade along the edge to dodge missiles as necessary.

On your second encounter, the Mecha boss will occasionally summon weak Adds that die quickly to Bombs or shots.

Take a look at my video demonstration on the second encounter with this boss if you have trouble:

The Masked Giant keeps the Laser Attack, and gains a spinning attack that constantly damages Chibis near him. Make sure that you create enough distance between you and the boss to prevent getting hit. He occasionally summons swarms of bots that can be easily killed with a Bomb since they all tend to rush to one spot.
The Laser pattern is also more erratic, but the sticking-to-one-edge strategy still works.

Here is a quick video demonstration on this boss, should you have trouble with him:

The EX-1 Stage pitches you against regular mechs and Masked Braves. I recommend taking Vermillion Knight as your character since she has Type Advantage against the Braves. You must kill 50 enemies to win, and only a fraction of the enemy spawned will be the weaker mechs. The Braves are capable of tanking multiple bombs and will headbutt you for 500 damage constantly, making the stage a nightmare to clear.
To give yourself the best possible odds, obtain as many Tesla Coins and get as many additional Support Chibis as possible. In addition, since the stage and its rewards does not change, you can come back later with even stronger gear (and probably a 5-Star Chibi) to make the stage more of a cakewalk.
My strategy here is to throw down as many Bombs and Traps as possible as I run around the map, and dodge away whenever the Braves start doing their Headbutt animation.

Another video clip for a more detailed demonstration of the run-and-gun tactic:

Tip: Try and assemble a team in a stage that allows 4 Chibis then switching to the Super-Hard stage and see what happens! (For instance, put Einstein as leader and Luna Kindred as a member) 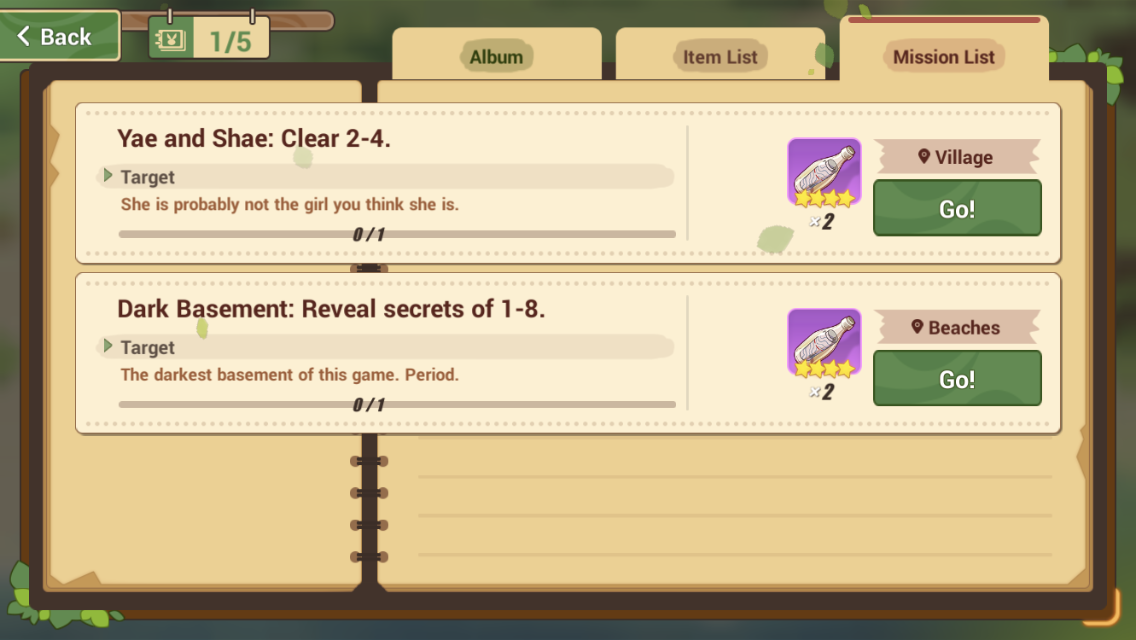 The Tesla's Crate event is a missable chain of events that is started by visiting the 1-8 Hut again after clearing everything. It will ask you to then visit the 1-4 Crashed Plane, where you encounter some monsters. However, instead of going into the waypoint to finish the level, look for a Crate near the Crash Site on the Northernmost section of the map. 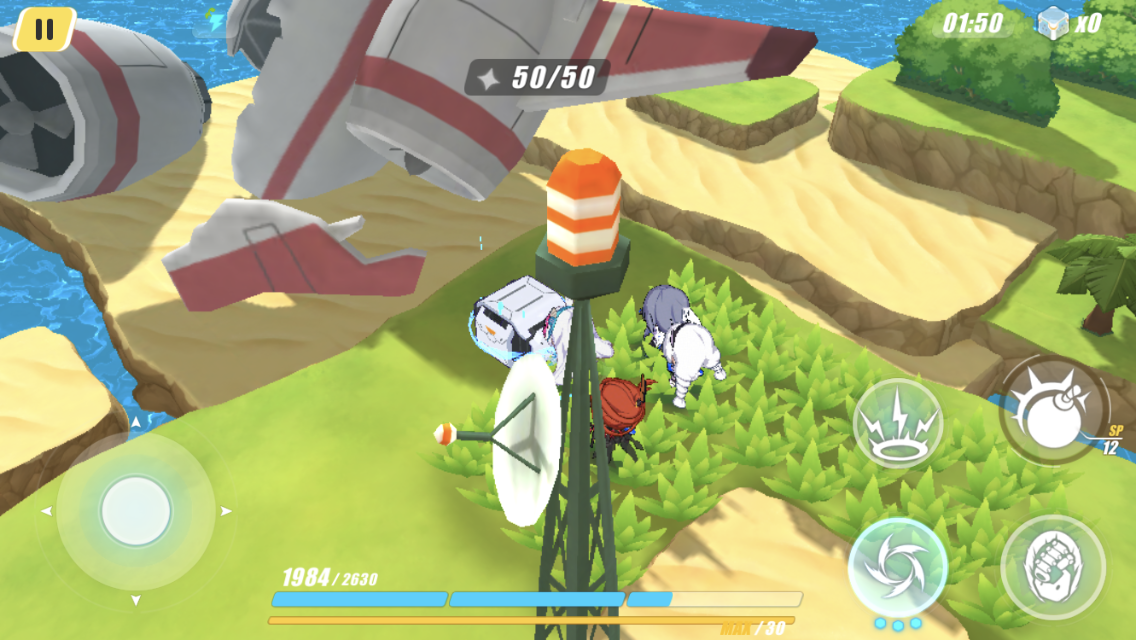 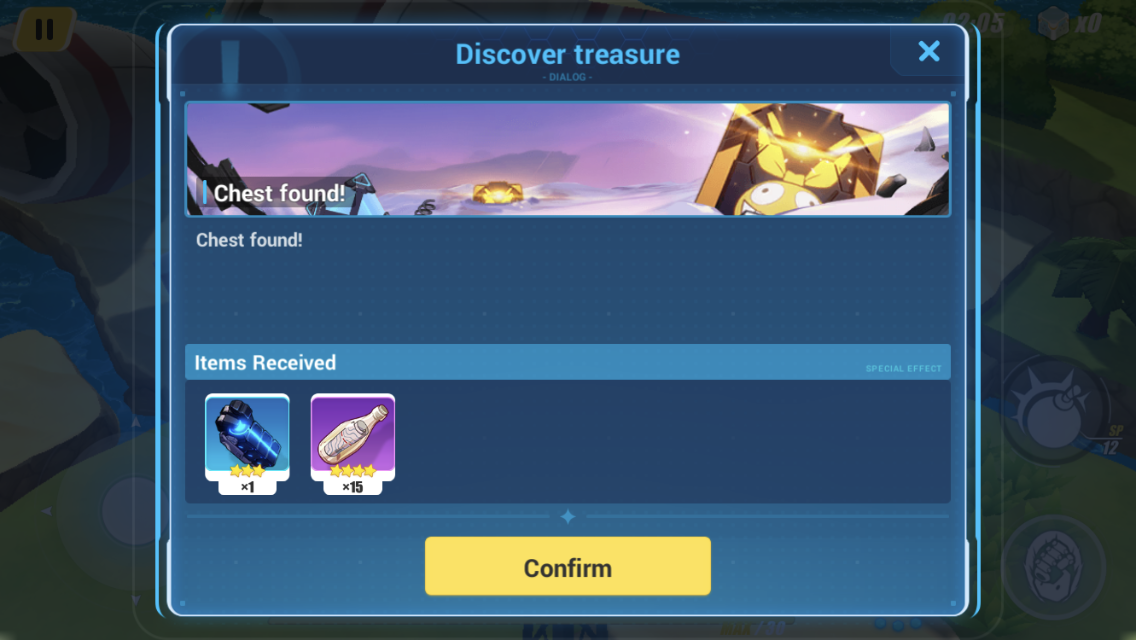 After that, return to the 1-8 Tent to unlock a new “Super-Hard” stage.

The Recommended Character is Kaiserin, who is capable of blasting enemies through walls. Other SG characters (Luna Kindred or Sublime Lotus) can blast through walls as well, But Kaiserin also has a type advantage against Mechs.
The stage is still doable with a MG character, though it is a bit harder since the Mechs that swarm you around the maze can do some crazy damage if not killed promptly (with a Paralyze field and a bomb, for instance). 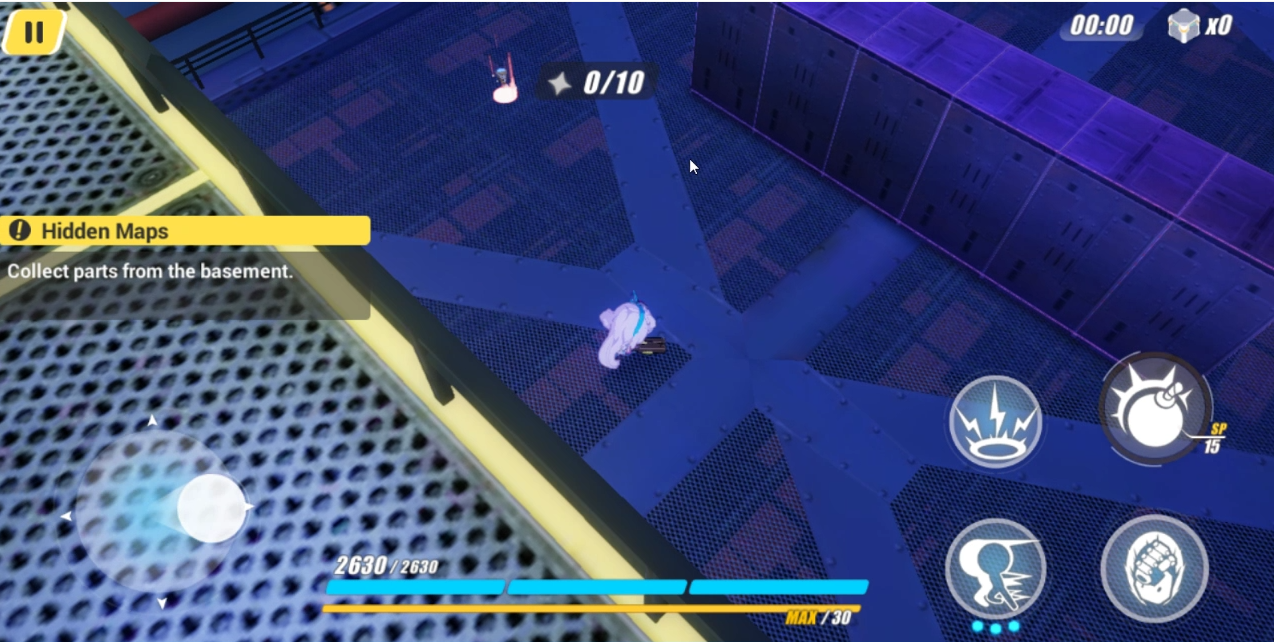 The stage objective asks you to pick up 10 fragments, but only 5 can be picked up from the ground. 2-3 more will drop after you kill all monsters that gradually spawns, and finally a Boss will spawn at the starting location. Killing it will reward 3 fragments, clearing the stage.

The Boss is no different from the first two Mecha bosses you face, except he has a bit more Health in exchange for not having the Laser ability.
It can be cheesed by shooting it across the wall, which constantly knocks it back with no way for it to return fire, like this:

You can watch the full run here:

And that is it for the introduction to Odd Drifter! Please enjoy yourselves for the rest of the event, and stay tuned for the next guide coming Aug. 18th, which will cover the next arc of Odd Drifter. 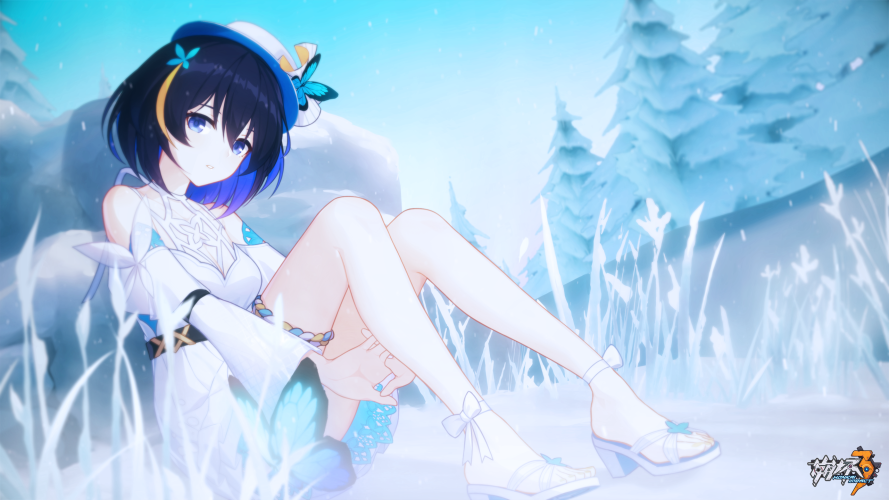