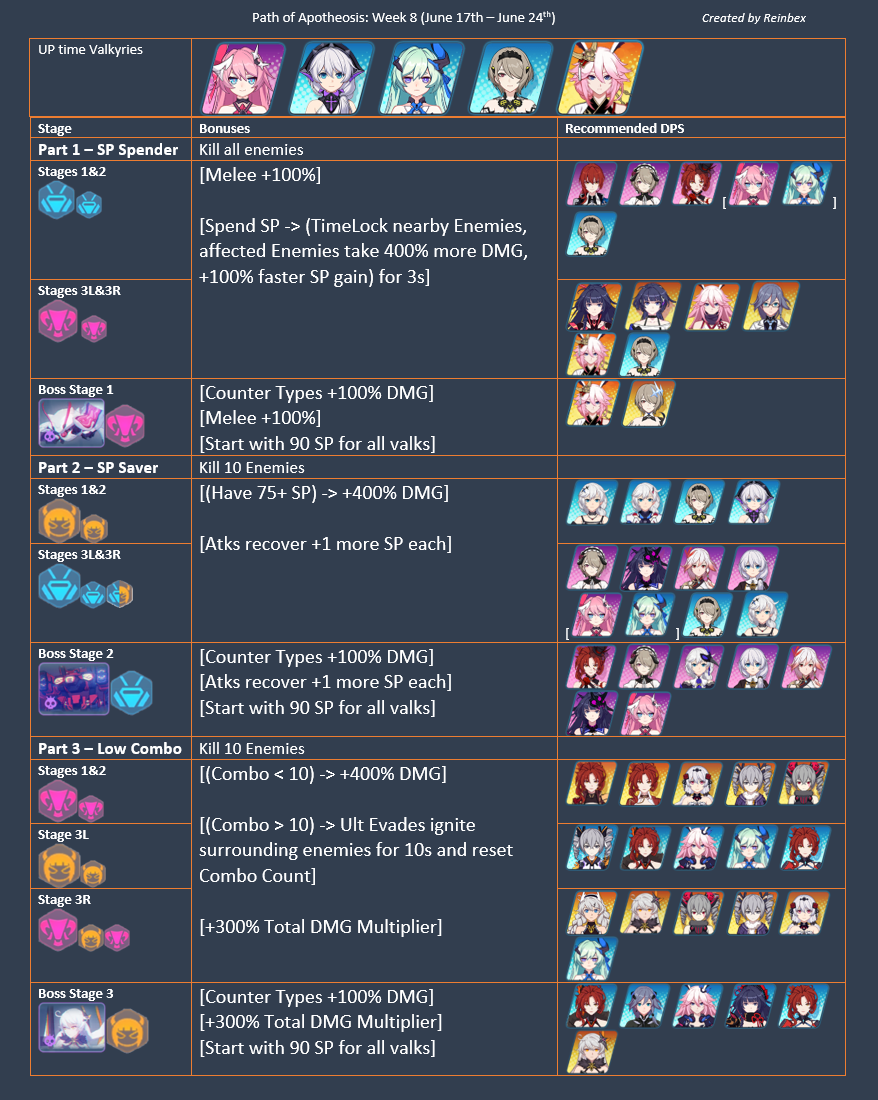 Strategies
The following provides a further in-depth look in the chart above. Please keep in mind for the following:
-After reaching the checkpoint of non-Boss stages, valkyries have their gear locked in and an attempt for them used up.
-All non-Boss stages share the same bonuses.
-All Boss stages provide an initial 90 SP to all your valks at the start of the stage.
-Week 8 is almost identical to Week 6's lineup.

DK/YA's Leader skill compliments on URs playstyle and can impair to trigger UR's QTE. DK/YA has plenty of cheap weapon skills to spend SP and a low SP-cost Ult. Please note that UR is also recommended for the zone 2 stages.

You might want to consider another PSY dps if your stronger DPS is UR.

For PI, you can utilize her two ways here. You can use ult whenever she gets 35 SP or you can save up to 100+ SP to finish all the enemies off in one big go.

A BIO main dps with other valkyries that have low SP weapon cost such as a Teri or Kiana. SR and PI can also DPS here.

Stages 1.3R and 1.3L are both full of PSY type enemies. They're both every similar to stages 1.1 and 1.2 with the exception of different typed enemies. In 1.3R, there's a few Honkai beasts that spawn first. Kill them all and Legatus will spawn. Avoid hitting his arms and hit the middle for most dmg.
While for 1.3L, there will be Frost Knights at the beginning. I recommend avoiding their status-inflicting hits and immobilize them with your valkyries. And at the end of the stage, there will be 3 main enemies. The 3 PSY Meduzoas will be Soul Linked. Unless your valkyries are strong enough, it's better to round them up to kill them all.

The first boss is a single PSY Crab. The Crab has many "delayed" attacks so beware of that when evading. And because it's discouraged to constantly switch valkyries and that the front of the Crab has very high defenses, it's recommended to go with the elemental DPS route. You can pretty much stay on your Elemental Melee DPS and win. If you wish, bring ss+ WD and DP to boost your dps valkyrie's DMG even further.
However, if you wish to use physical-DMG based DPS instead, then you would want to bring along some form of impairing such as CH to lower the boss's defenses. Watch out for it's ball bounces and keep attacking it with 1 valkyrie so you can ult asap. The sooner you ult, the less likely you'd need to use up more attempts.

SD leads for higher crit rate. SJ or PI will be the main DPS. Both SJ and PI have many hits per second with their attacks so they can gain SP easily from the bonus.

In both Stages 2.1 and 2.2, there are a lot of zombies. Focus on staying on 1 valkyrie and have her gain as much SP as possible asap. Fast multi-hitting valkyries such as SJ or PI are preferred in order to benefit from the SP-recovery bonus. Other valkyrie options are VR and VBS. Once your valkyrie has 75+ SP, killing the enemies will be a breeze. Just watch out on using melee against Black bushis.

Both stages 2.3R and 2.3L are almost the same. They're both similar to stages 2.1 and 2.2 with the difference of having MECH enemies instead. In 2.3R, there will be plenty of MECHs to kill. Stay on your DPS and gain SP digiliently. For 2.3L, there's more DEF heavy oriented enemies there. Bring an elemental PSY valkyrie that doesn't rely too much on spending SP such as Phx. Due to the nature of this week, you can use VC gather enemies for an easier time for your DPS. Should be a breeze once your DPS has 75+ SP.
One thing to note is that the O-OMEGA enemies turn into a BIO type when their front shield breaks. You can side in a MECH or BIO type valkyrie if you wish to counter that scenario.

VP is your main DPS while WD (ss rank) has her buff barrier and LE can set up conductivity for more Lightning DMG intake for the Boss.

Stages 3.1 and 3.2 are very straight forward. 3.1 has your typical Honkai Beasts. 3.2 has DEF Crab, Tentacle Beasts, and the DungBall Beast. Just maintain your combo count to less than 10 every time you deal damage. Since Crab has high frontal DEF, you can bring an Elemental Valkyrie like KM. In 3.2, other enemies will still spawn even if you don't kill the Crab. Allowing you to reach the 10 kills sooner. KM's QTE trigger is ignition, which so happens to be what the DungBall Beast does when it explodes. During the times when your combo counts rise above 10, focus on evadin instead or not hitting so you can reset your counter and increase your DMG.

This stage's enemies are Scythe Zombies, White Bushis and Helscape (Doom's cousin). If you gather the enemies and use a low combo hitting Melee Mecha DPS, this stage would be a breeze. Be wary of the tankiness that the enemies have on this stage alongside Helscape's red web.

The last boss of this week's Path of Apotheosis is the Herrescher of the Void (ver.1). Because it is HoV v1, Lightning DMG can affect her. For your choice of valkyries, you really don't need to mind which DPS to use since there is the +300% Total DMG Multiplier Bonus. If you really wish to have the best advantage, use a MECH valkyrie that can hit the often-teleporting boss. It's also recommended that you bring a shield Bronya (DB,YA/DK) to block her "ult" if you can't dodge it. Other recommended supports include DP for passive impair, YA/DK for ignore interruption barrier. Just stay on your DPS for most or all of the time during your fight if you wish to succeed against HoV. If she has any lingering spikes on the floor, be aware that they will spawn a Honkai Beast.

If you are reading this, you've reached the end of my guide. Thanks for reading and good luck to all in this week's Path of Apotheosis! 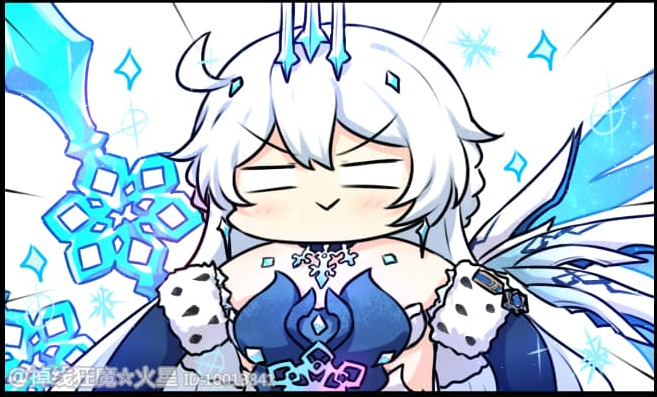