In this guide, I will be going over the Scythe Angel event, both the event version with preconfigured loadouts and the challenge version that you must do with your own rita.

The target of 48 thousand is achievable using only SS Umbral Rose with decent non-gacha equipments. However, it does require a good amount of retries and fine understanding of Rita's mechanics.

Here is the full video demonstration:

Below is the score I achieved using no gacha pieces. While I do have a higher than average Divine Key chamber progression, the gears I used here are not maxed, so going in with better gear or maxed free-to-play gear should put you at similar power levels.

If you are cutting very close, I would heavily recommend rolling for better affixes and turning on Divine Key chambers, as doing both can easily give you a 7% increase in damage, if not more, which is very significant. 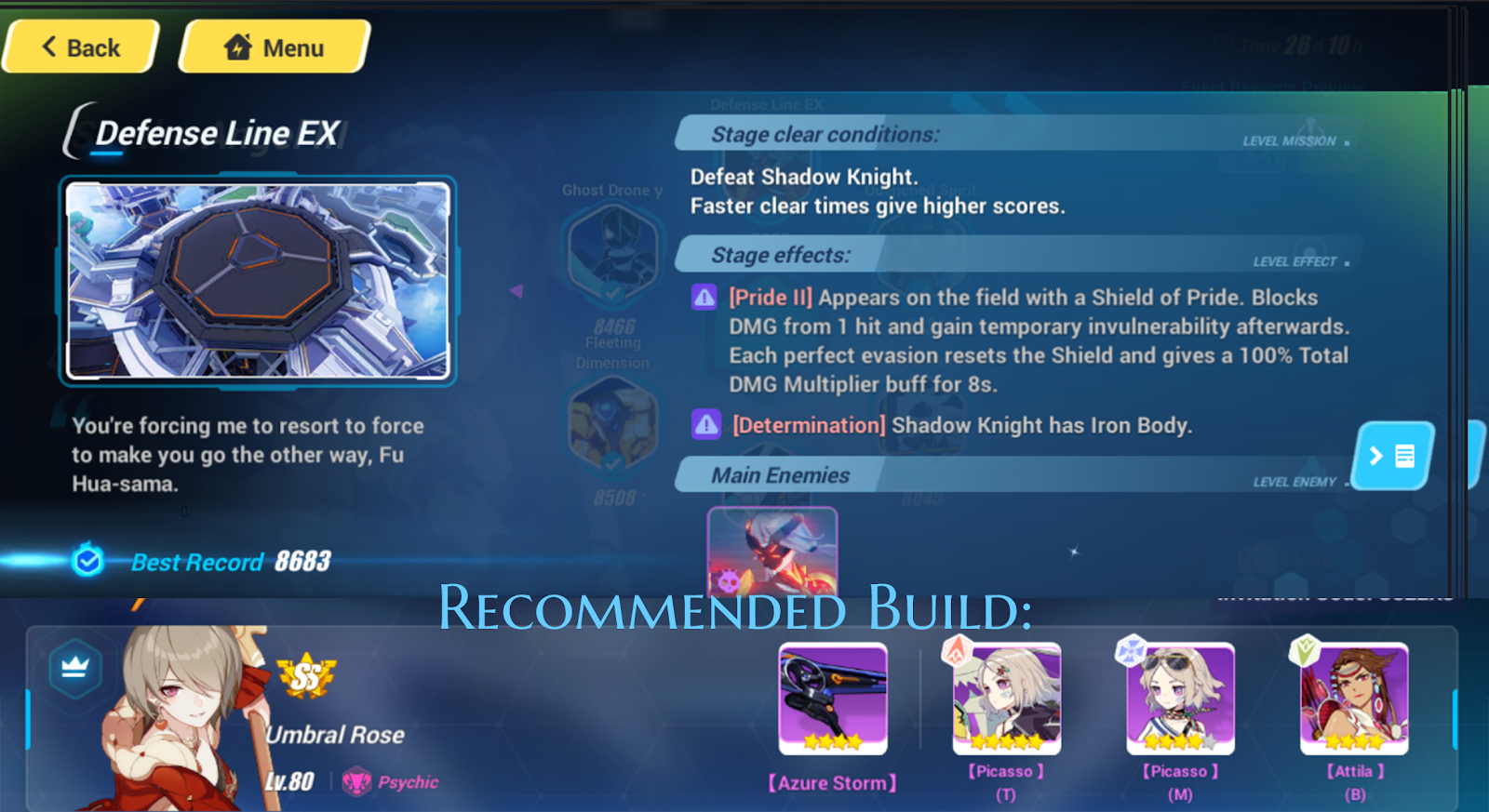 Since both Event and Challenge (Scythe Angel 1/2 and Scythe Angel 3, respectively) mode of this stage is practically identical, I will not be discussing the Event strategy specifically here.

This stage is, in essence, a DPS check. The mechanics are quite simple and if you have been fighting SK in Memorial Arena, you should have a basic understanding of her kits. Note that she does not put up the annoying evade shield in this mode (or at least I have yet to encounter it), which makes the fight a lot easier.

The Pride shield helps mitigate the high interrupt power of SK's hits, and gives you a cushion to dodge her subsequent attacks.

My recommended non-gacha build here is Azure Storm (or Senescence/Aphrodite) with Picasso T/M and Attila B. Feel free to experiment with alternative sets or use your stronger gacha DPS stigmatas, such as Zorro sets, Michelangelo, or Schrodinger Band. 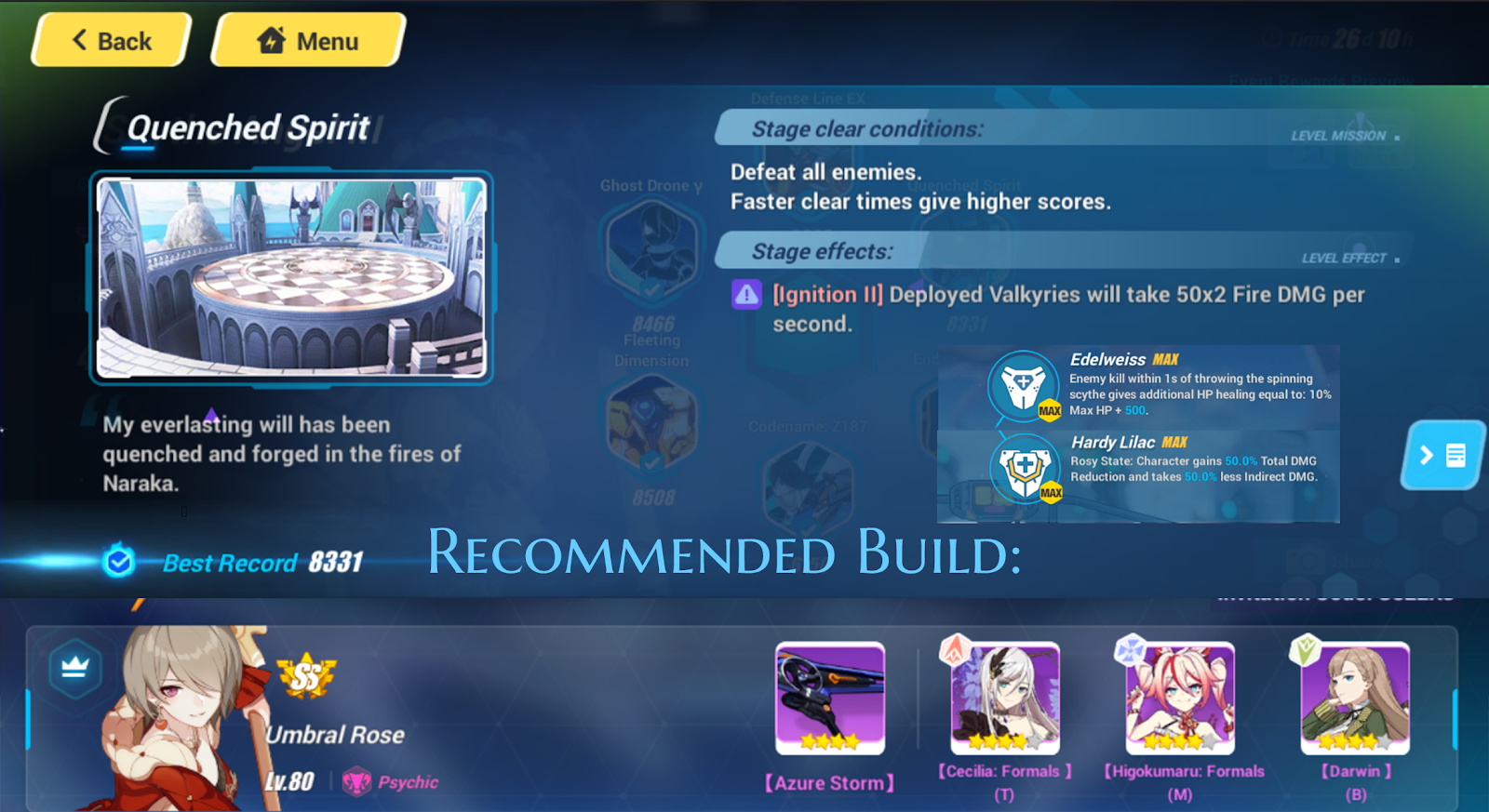 This stage pushes you to take full advantage of Umbral Rose's survival aspect of her kit. Specifically, Hardy Lilac, reducing her damage taken whenever she does a charged attack, and Edelweiss, which will heal her for ~750 HP whenever you score a kill right after a charged attack.

In addition, as a last-ditch effort, following up a charged attack with an ult can provide you upwards of 1000 health without even scoring a kill.

In the Event mode, you are allowed to bring Divine Prayer and provide extra healing as needed. In Challenge mode, however, you can only rely on these passives or additional stigmata effects.

Note that the Enemy spawn pattern will be identical to Stages 3 and 5: The next set of enemies will not spawn until the current wave has only 1 enemy left. This can be somewhat exploited by leaving enemies on low health and harvesting them with a charged strike, not having to worry about new spawns screwing your attacks over.

My recommended non-gacha build is Azure Storm (or better), with Reburn T/M and Darwin B. However, if you are not very confident, you may opt to use Rowland T, Rinaldo/Kepler B, or Picasso M/B to provide extra healing effects.

Alternatively, Artemis also does have decent survivability, with her damage reduction on Charged and a hefty heal on Ult. Rotating between the two can make this fight a breeze should you have Artemis available. 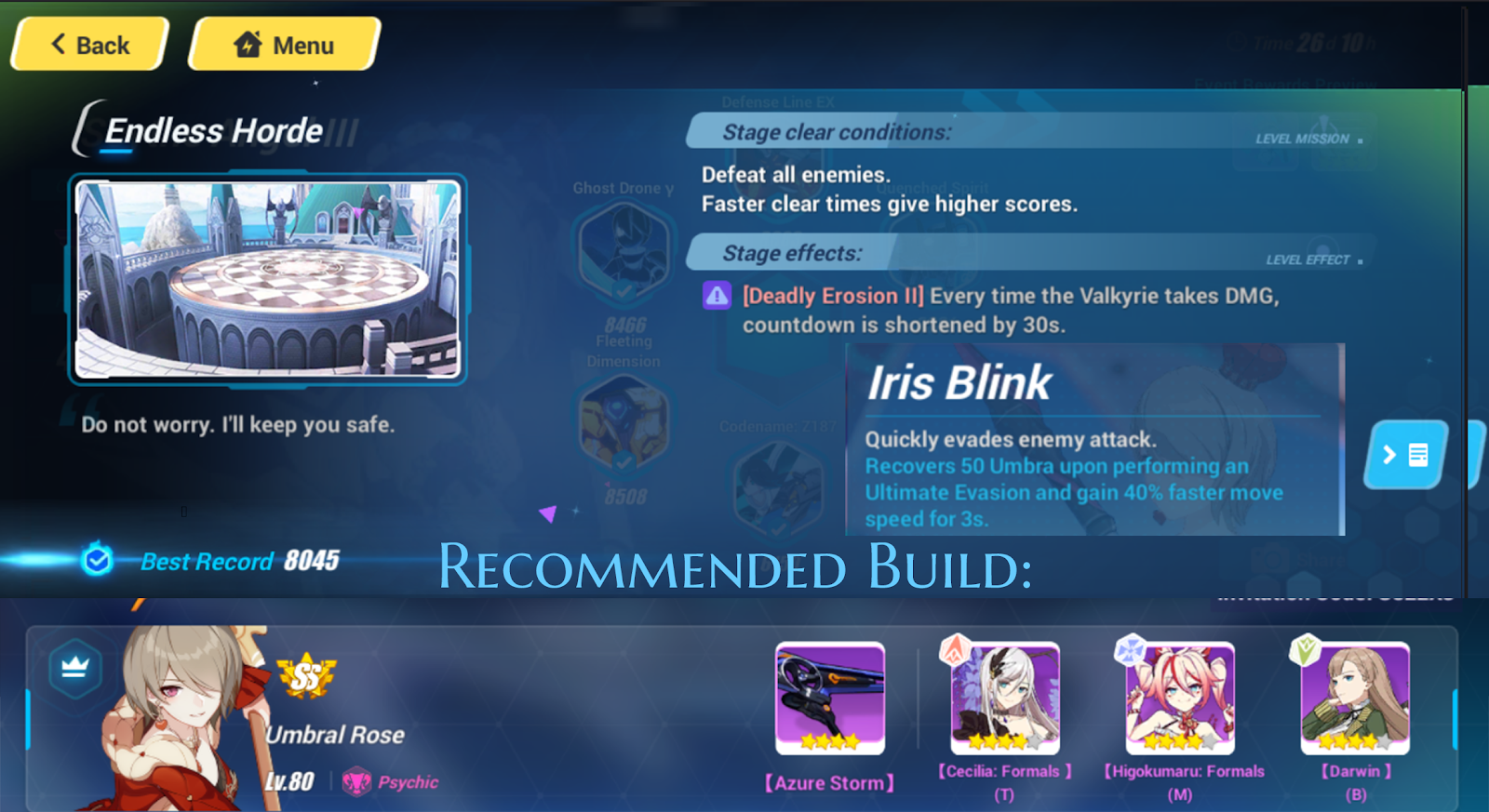 This stage is probably the most difficult stage to do well on. However, since there are not many enemies, it is entirely skill dependent if you can score decently.

In the Event mode, you are provided with high-quality gear, allowing you to make up for your mistakes in this level from other stages. I personally scored a measly 6000 in the Event version and still passed the 48k limit easily.

In the Challenge mode, however, you are pressed to score well here if you want some leniency on the next stage, which features two bosses and will likely tank your score if you are not suitably geared.

The recommended non-gacha gear setup here is similar to Stage 2, except that I would heavily recommend using Azure Storm over Senescence. I will explain this below.

There is one stigmata effects that can be used to “cheat” this system: Hymn (M) and Monet (2-set). Other shielding effects (such as Seele, Shelley, Ryuunosuke) seem to not work for unknown reasons. With Monet, however, they can negate one (or two, if you have the full set) timer penalty when their effects are active.

My favorite strategy with this gear set-up is to build SP in the relative safety of the first pod. This means that Azure Storm, which does not consume SP and accelerates SP recovery, is superior to Senescence. Like Stage 2, the next sets of enemies will not spawn until only 1 enemy is left standing. As such, with Azure Storm's attack speed increase (and slightly lower damage compared to Senescence), it is easy to build a full SP bar on the first pod. This full SP bar allows you to destroy Pod 2's Honkai beasts, and two additional ults will be enough to handle the tricky mechs in Pod 3. All in all, you will only have to avoid getting hit long enough to build 104 SP on Pods 2 and 3. 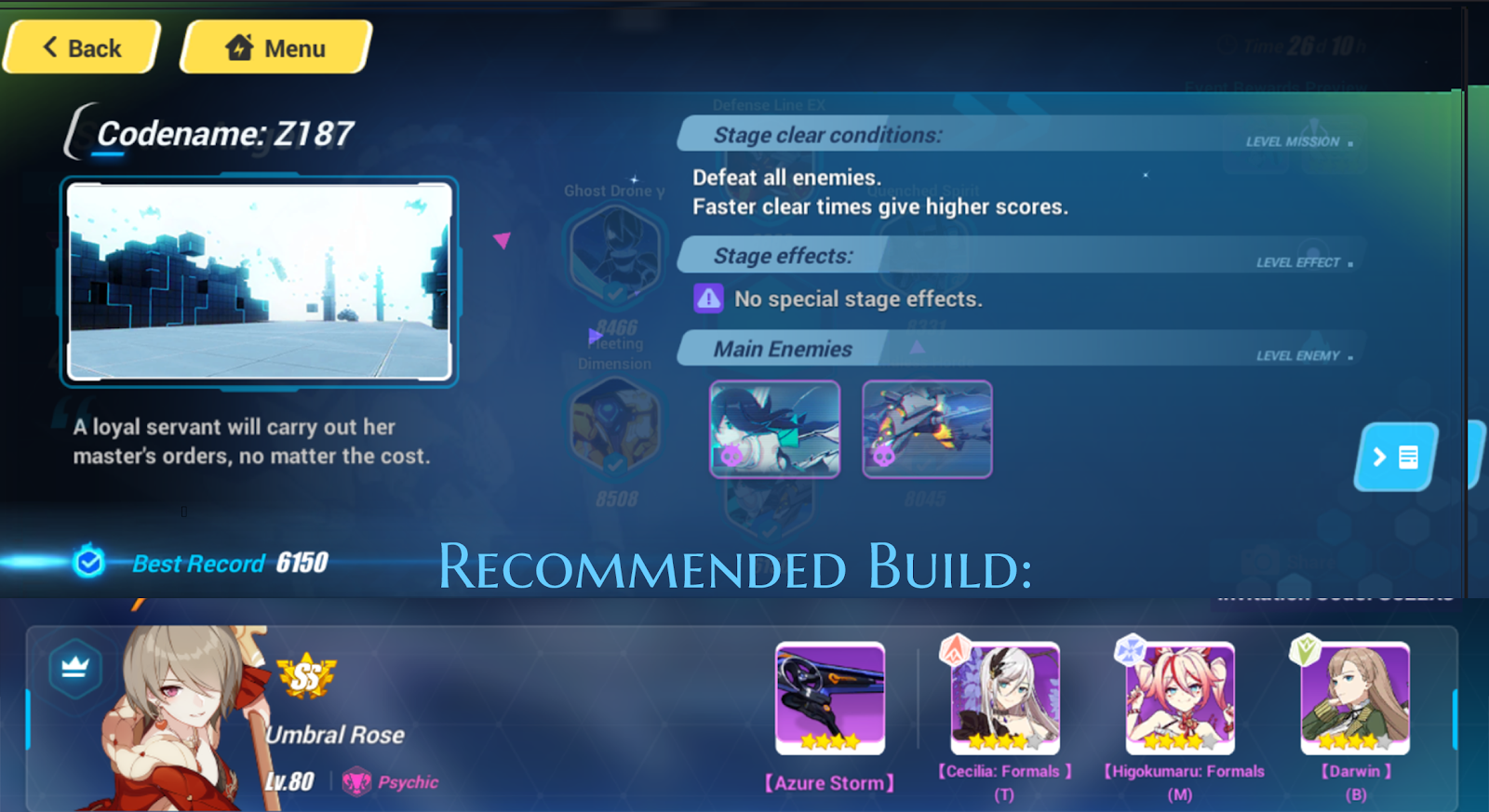 This stage features two bosses and no stage effects.

In the Event mode, you are provided with a standard-issue Judah team, which can dispatch the RPC very easily -- start with Phantom Iron's ult, switch to LE to proc Conductive and use Raikiri, then VP's dodge-cross-ult sequence will easily nuke RPC right off the start. Wendy may take more work but the Event version is relatively easy as soon as you figure out the Judah rotation.

The Challenge mode is a different story: You will likely have to deal with RPC's annoying movesets and Wendy's unpredictable attacks (made worse if you did not have much experience with Wendy herself) for an extended period of time.

My strategy here is to start with Wendy, but switching to RPC as soon as he lands after his hover move. Since RPC only does Hover once, this strategy guarantees that you can stick to one boss and completely ignore the other and not having to be forced to switch midway through.

There are two ways to deflect missiles when RPC is airborne: Rita's Ult can deflect it if you time it correctly (Since RPC always missiles as its first move, casting ult about 3 seconds after he takes off usually deflects all missiles), or her charged attack when timed right. Skadi Ondurgud's active is very powerful for this purpose as well.

My recommended non-gacha setup stays the same as Stages 2 and 3, as this set offers sustained outputs without combo restrictions. I would avoid using any Combo-based stigmatas at all, as both bosses move frequently and it is easy to lose Combo. 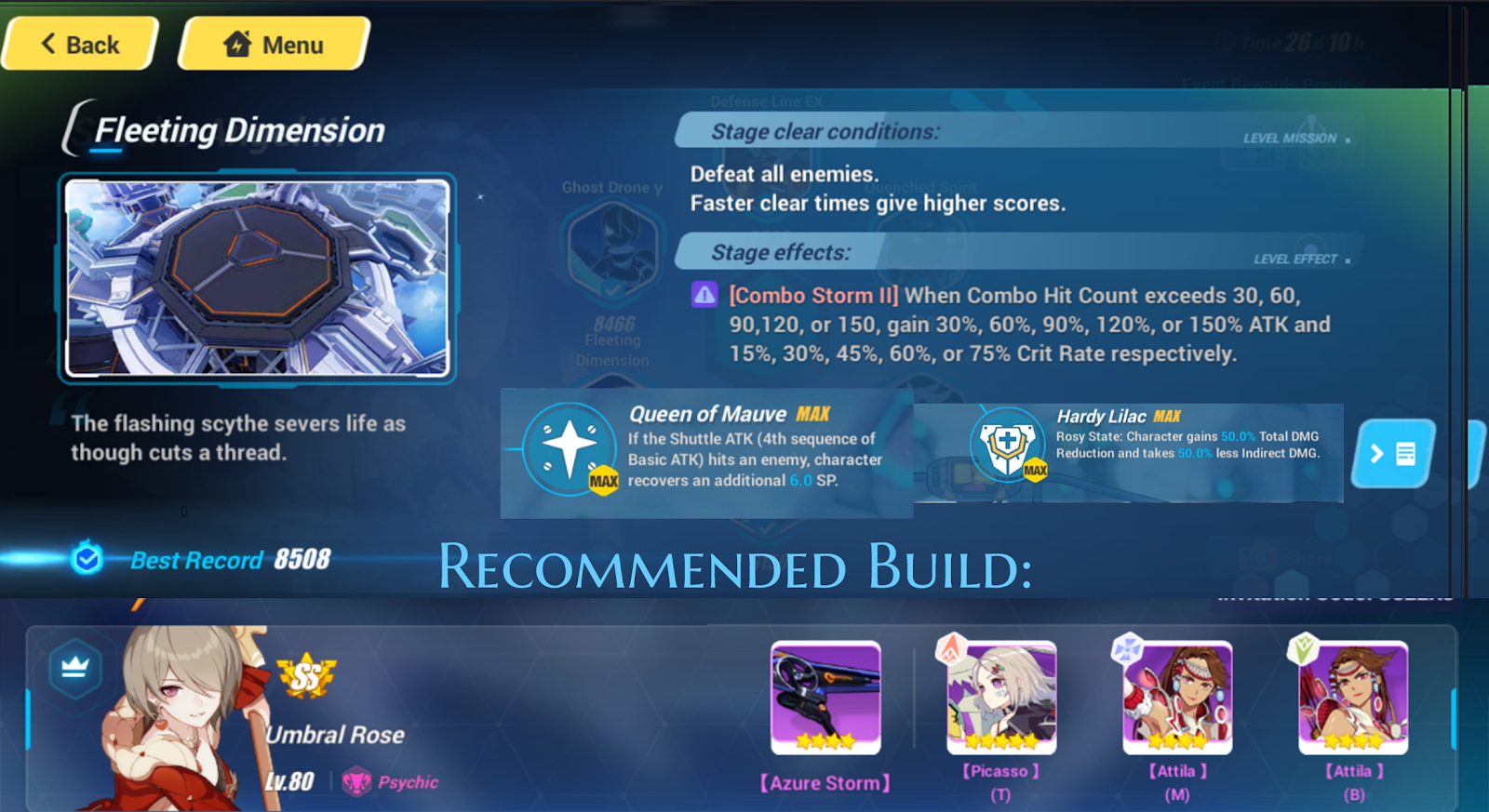 This stage has a powerful stage buff. At 150 combo, you essentially have 2.5 times your base damage and 100% crit chance.

Given the high crit rate, it is best if you stack high on Crit damage. Attila M/B is a very good choice here, since the 2-set gives a hefty crit damage buff. Alternatively, Transcend B (Anniversary Mei) is also powerful, providing a 50% crit damage buff as long as you maintain high HP.

The key difference between Event mode and Challenge mode is that you are provided with Flame Sakitama in Event mode. She provides a +50 Combo effect off the start with Higokumaru Set and can efficiently dispose of the first pod of creatures.

My advice here is: Ult early, ult often. Similar to Stage 3, I actually recommend Azure Storm over Senescence here since it gives you more attack speed (allowing you to rack up combo faster) and damage is usually not the issue here.

Lastly, unless you are using Transcend B, try not to dodge unless absolutely necessary. Every 4th-sequence you pull off gives you 6 additional SP, which very well may be the difference between ulting 4 times versus 5 throughout the battle. 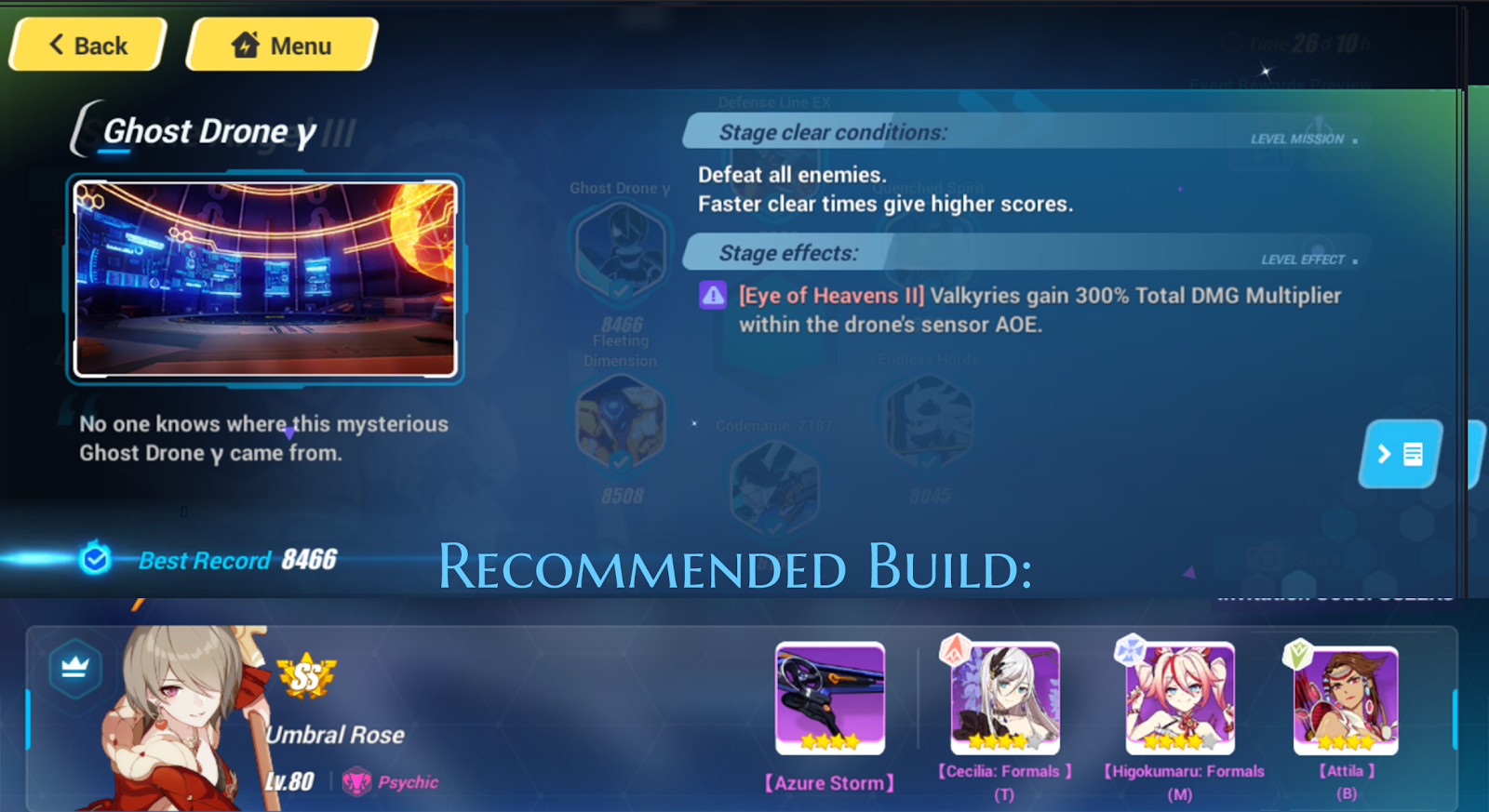 This stage gives you a hefty buff for staying in the circle. However, it is rather random whether the enemy will stay in there with you or not.

In the Event mode, you are provided with strong enough gear that makes the Drone buff a bonus than a necessity.

However, in Challenge mode, you will likely have to rely on the Drone buff to deal effective damage, between the severe type counter against Umbral Rose and having worse gear.

Unlike previous stages, I would not recommend Darwin here since the enemies are generally less aggressive and you have less chances to pull dodges off, making Attila a superior choice.

Note that the damage buff applies as long as YOU are in the Drone radius -- which means casting ult or charged inside the Drone area will receive the buff even if enemies are outside of it.

While the event may feel hard off the start, it is not impossible to finish without using Gacha pieces. However, the SS-rank upgrade on Umbral Rose is very essential and I would heavily recommend getting her SS upgrade if you really want to finish this event and are 3-6k short.

The majority of the event's rewards only require 28000 points, though, so I personally consider this event to be more of a fun challenge than a skill/gear check that you are obligated to fulfill.