The Towers of Shattering Lucidity

Previously in Fairytale Rhapsody, we have dethroned and recruited The Red Queen, only to find there is a more powerful player lurking in the shadows: the White Wytch. We must now swipe left and take the fight to her, starting with the Tower of Lucidity.

The Tower of Lucidity will have 1 recruitable companion, 8 chests, and consists of two floors.

The first floor is a maze-like floor where you proceed farther by finding the “false” walls. At the start of the maze, you will find a button that will allow you to destroy the fake walls.

The maze itself is pretty straightforward without any difficulties. There are two notable npcs that will add some colorful hints and backstory if you want to interact with the monsters or the arrow signs.

Eventually, you will reach the end of the maze without issue and find an illusion of Mei the Perpetual Side-character, who will be the boss of Tower of Lucidity. Defeating Mei will scramble up the maze, but the key mechanics remain. You will press a button and start breaking down the fake walls (gold clocks this time) and venture into the maze.

You will meet face to face with another illusion and this time you will defeat her once again and scramble up the maze one final time. This time the fake walls are the clocks which are in the wrong orientation. 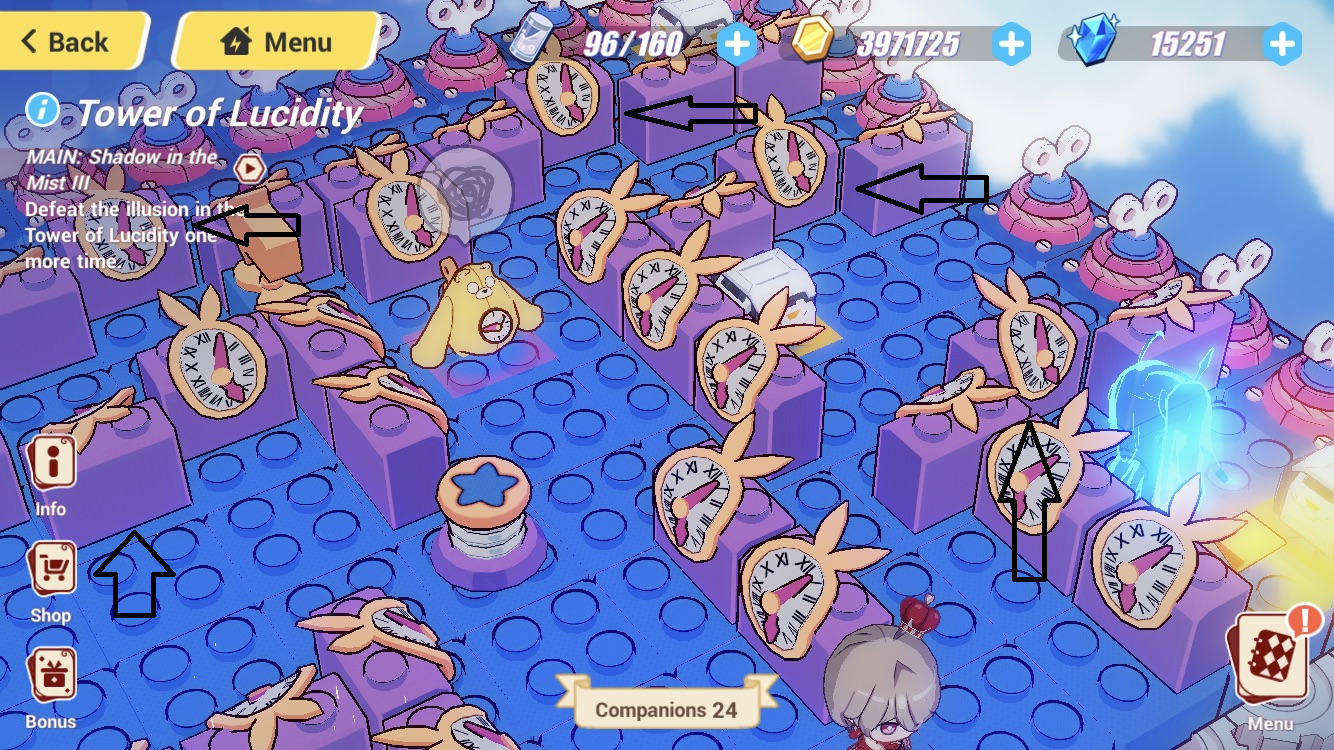 Upon finishing the maze a 3rd time and beating a Mei illusion a 3rd time, you will be able to move to the second floor. 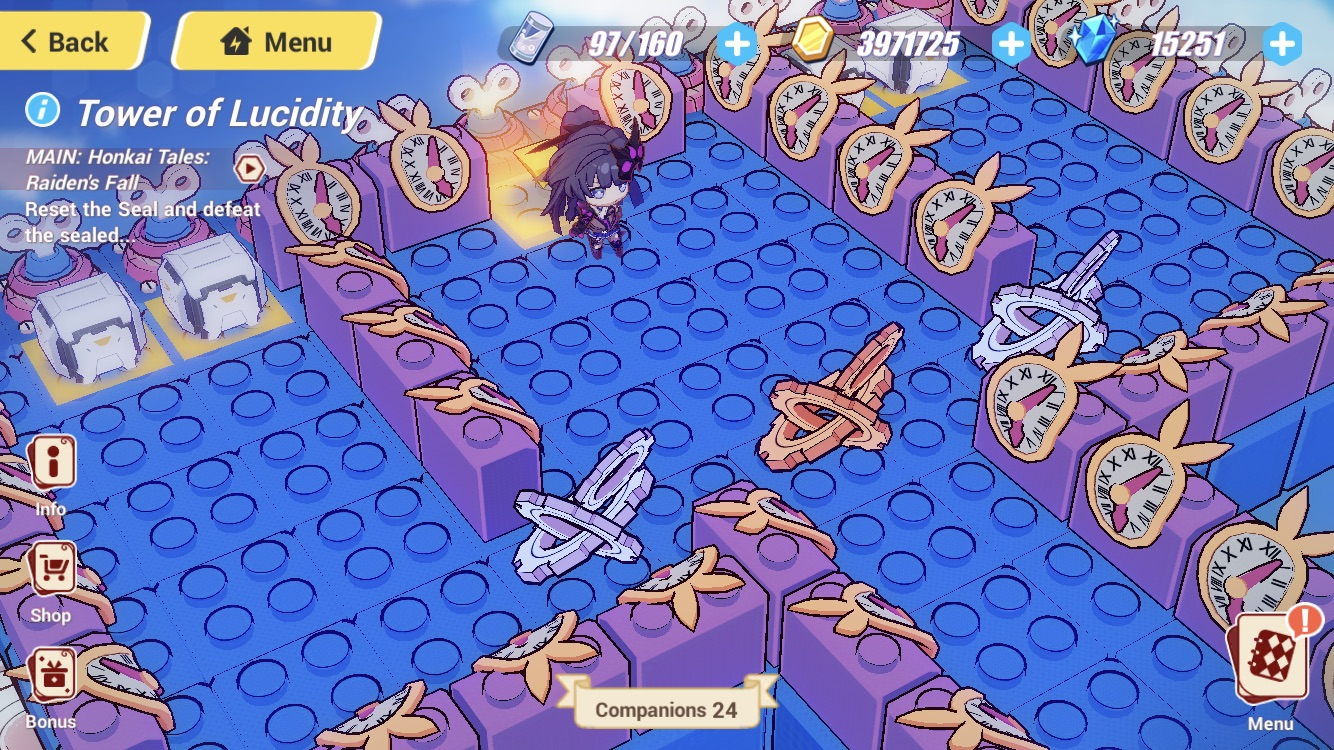 In the second floor, we will have to best Mei the Reindeer a fourth time in battle. Afterwards, you will be able to grab the last four chests on this map and we are onto the Tower of Shattering!

Tower of Shattering will have 9 chests to open and consists of 3 floors plus an additional fourth "hidden" floor. 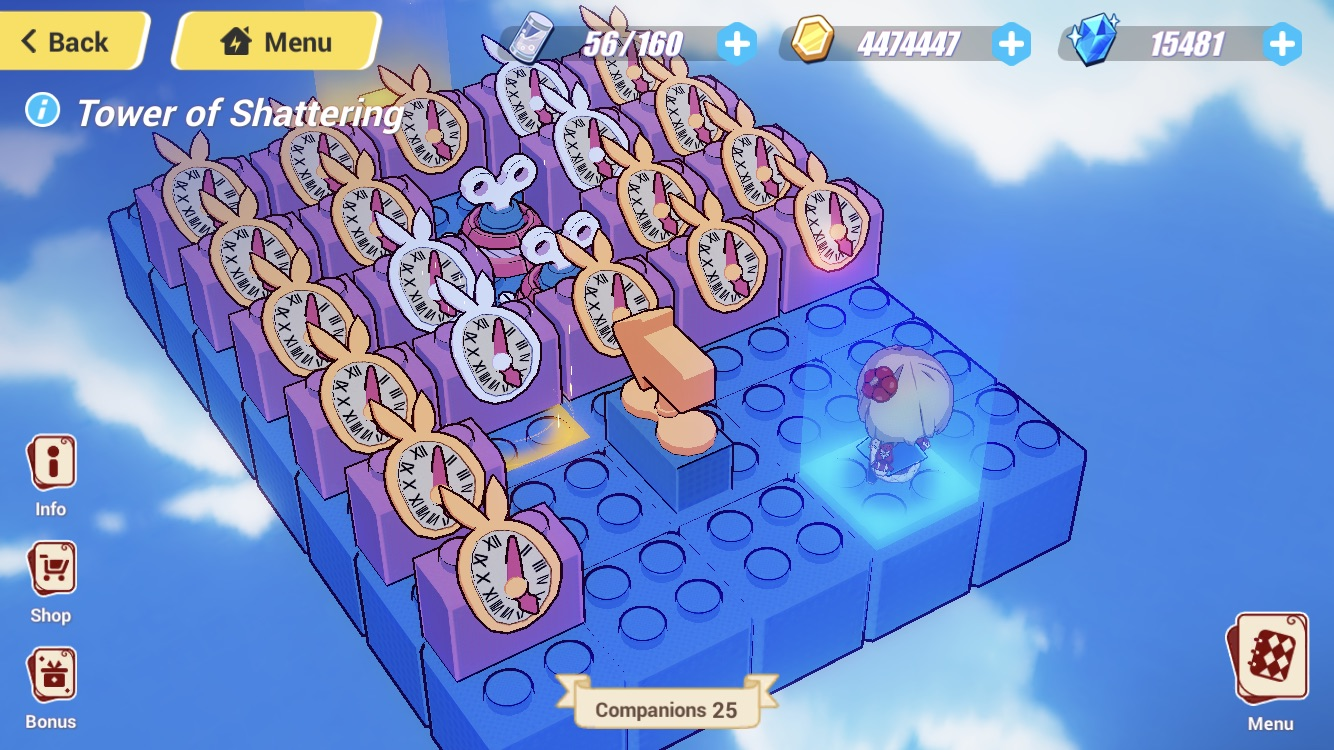 The first floor of the Tower of Shattering will introduce to you the mechanics that will follow for the rest of the tower. The silver clocks

are destructible and will clear a path for most of the maze. We are also introduced to these bombs

that will explode and clear adjacent walls after we interact with them. You and Fuhua will clear out the bombs without issue so do not worry about dialogue choices too much. After making it through the first floor, the second floor will be much of the same. 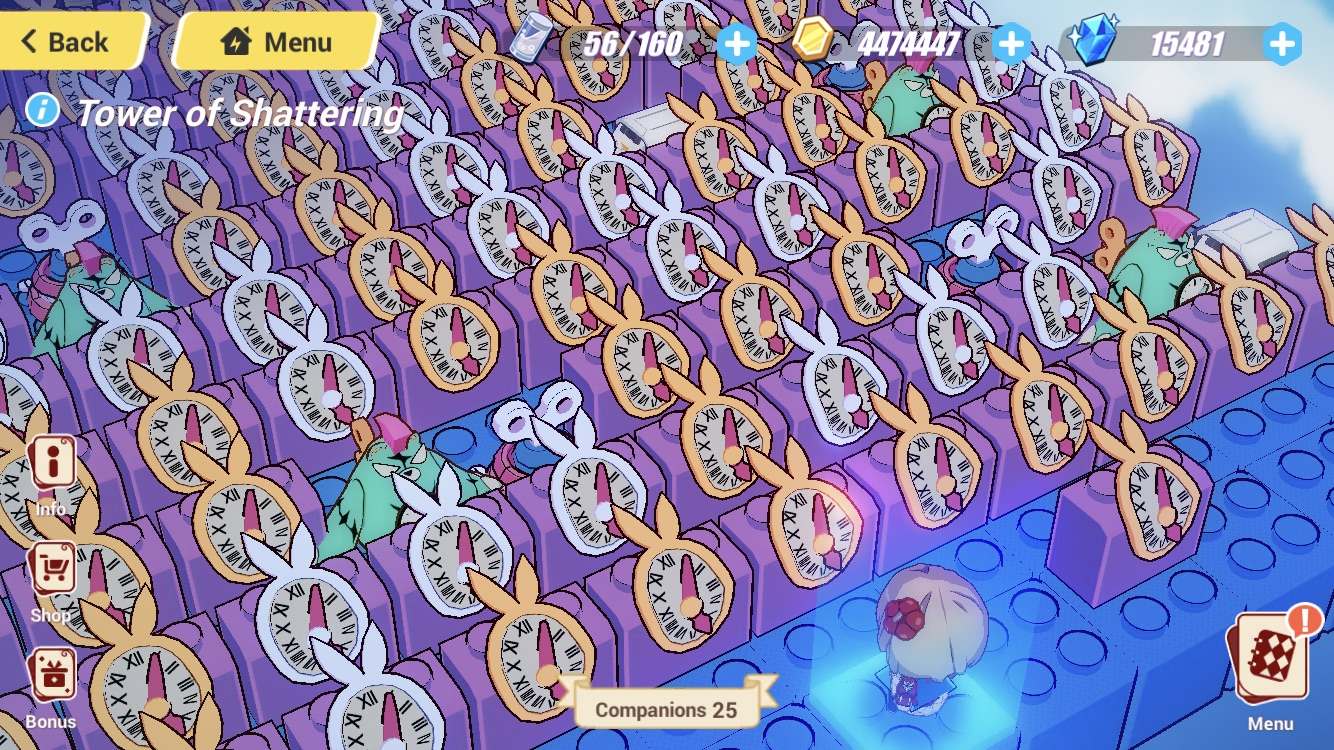 Go through the silver clocks and detonate the bombs. You will meet challenging boss monsters that you can safely fight or ignore. Try and make your way Northeast, until you can find a button

that will give you an item that will allow you to also break through gold clock walls. Use this to make your way West to the second button. Interact with the second button twice. Most of the remaining walls will disappear and you will see the main boss of the floor guarding the North exit accessible. Defeating the main boss will also allow you to return to the past monsters we have ignored. Awestruck of you defeating the boss, they will quickly submit and give you a small reward when you talk to each.

As you look around the remainder of the now mostly cleared floor, you will also notice a yellow monster you met in the last tower, appearing where a gold clock wall used to be.

Talking to it will reveal a hidden floor at the Southwest. 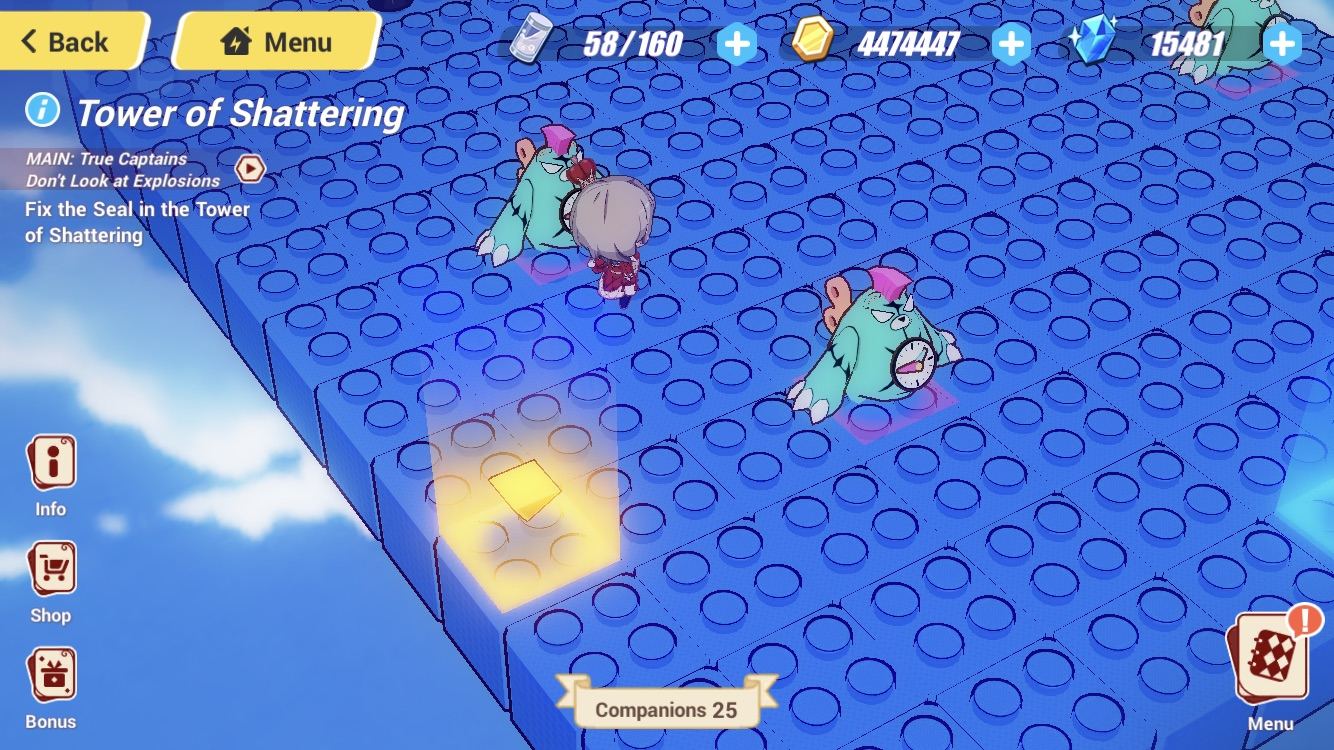 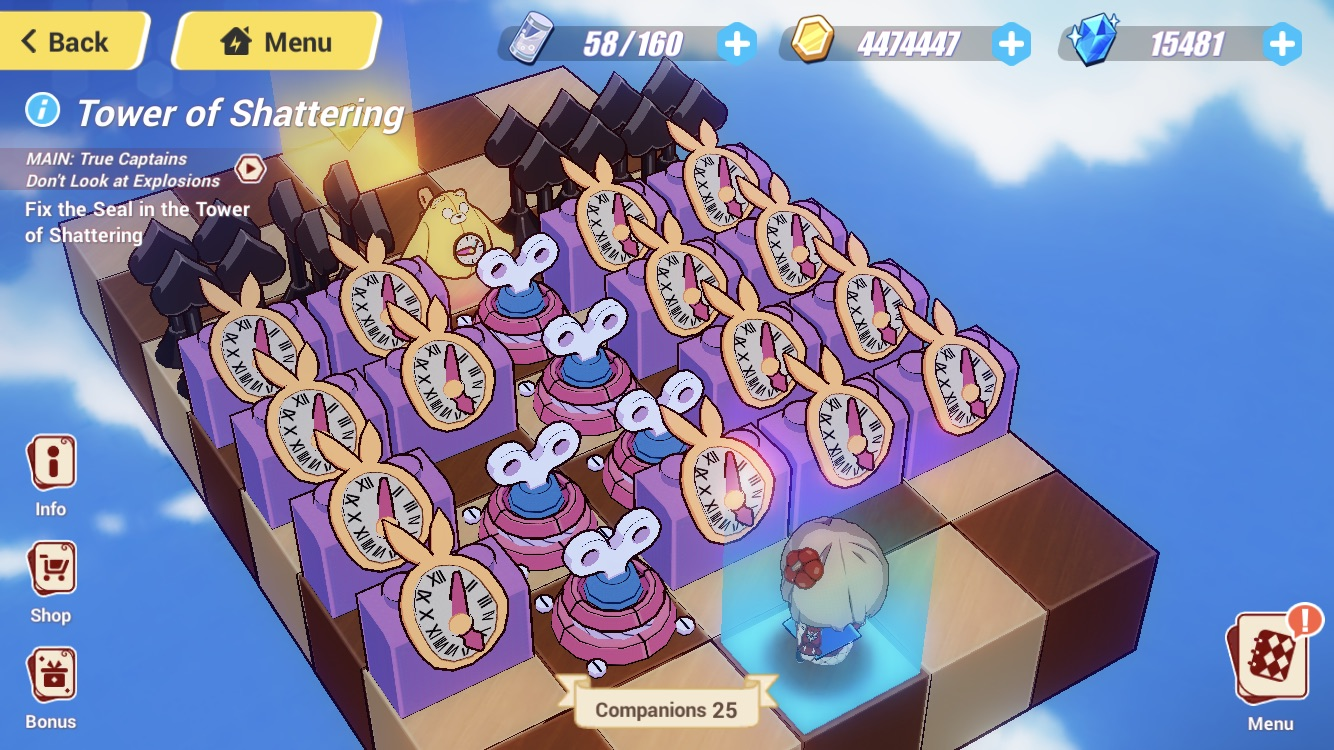 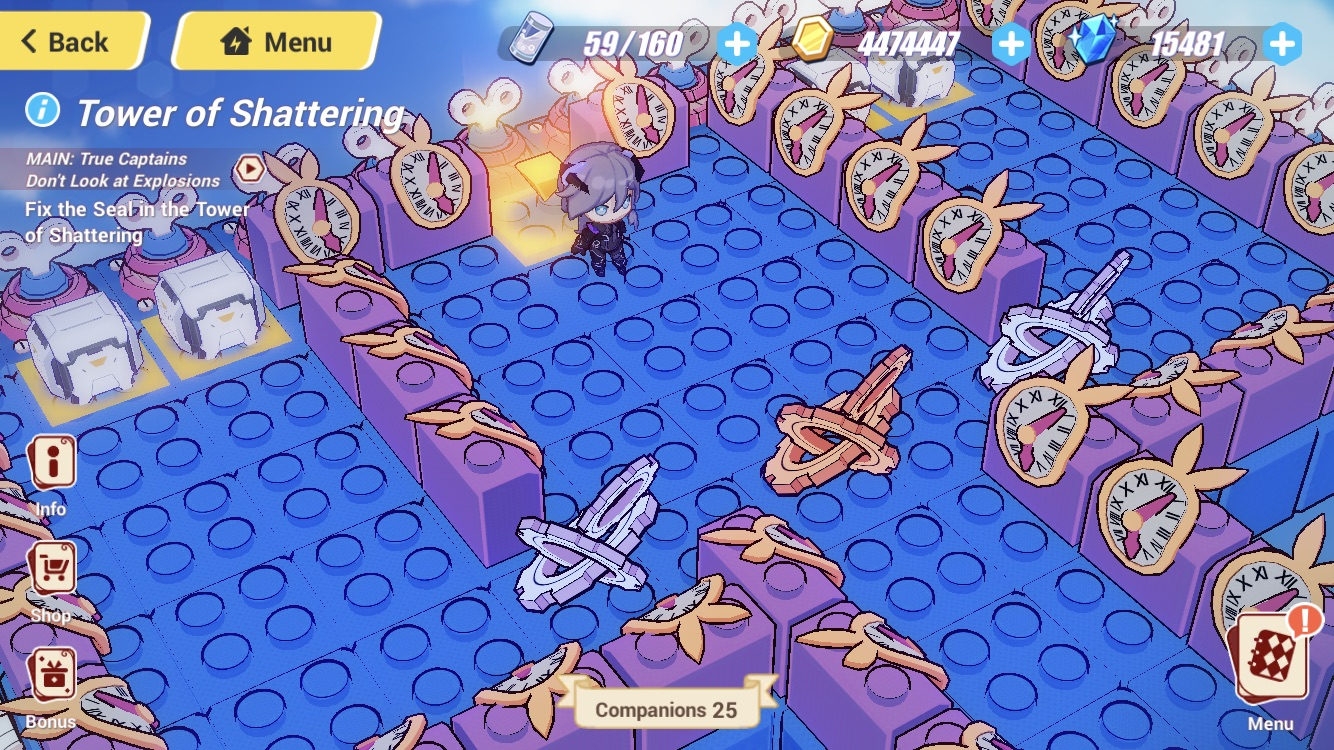 Finally, we will pass through to the third and final floor of the tower and see the same set up as our last tower. Beat the main boss, Fu Fu the Padrino Pilot, and you have officially completed the Tower of Shattering!