This will be a first look into the rhapsody event and event missions and some tips to help you get through the early stages.

-For starters we look at the rewards and their value:
You get the standard trinity shard which is always nice.
A 4star costume for wolf dawn, which is great considering this is the first free wolf costume we're getting.
We get the 3rd piece of the theater stigmatas:"Mei:Princess (T)" which is honestly a disappointing stig performance wise though thanks to the 3 set it has some potential eatly on, it's also an event stig so thats great for collectors.
And finally we get some Misc. rewards like a focused supply card some time structures, 40 wolf dawn frags 40 anti-entropy imaginary cores...etc.On top of that you get 350 crystals and 10 crystals daily for the duration of the event from the event missions.

The event is enjoyable and not grindy at all and the rewards are decent so there's no reason not to participate. 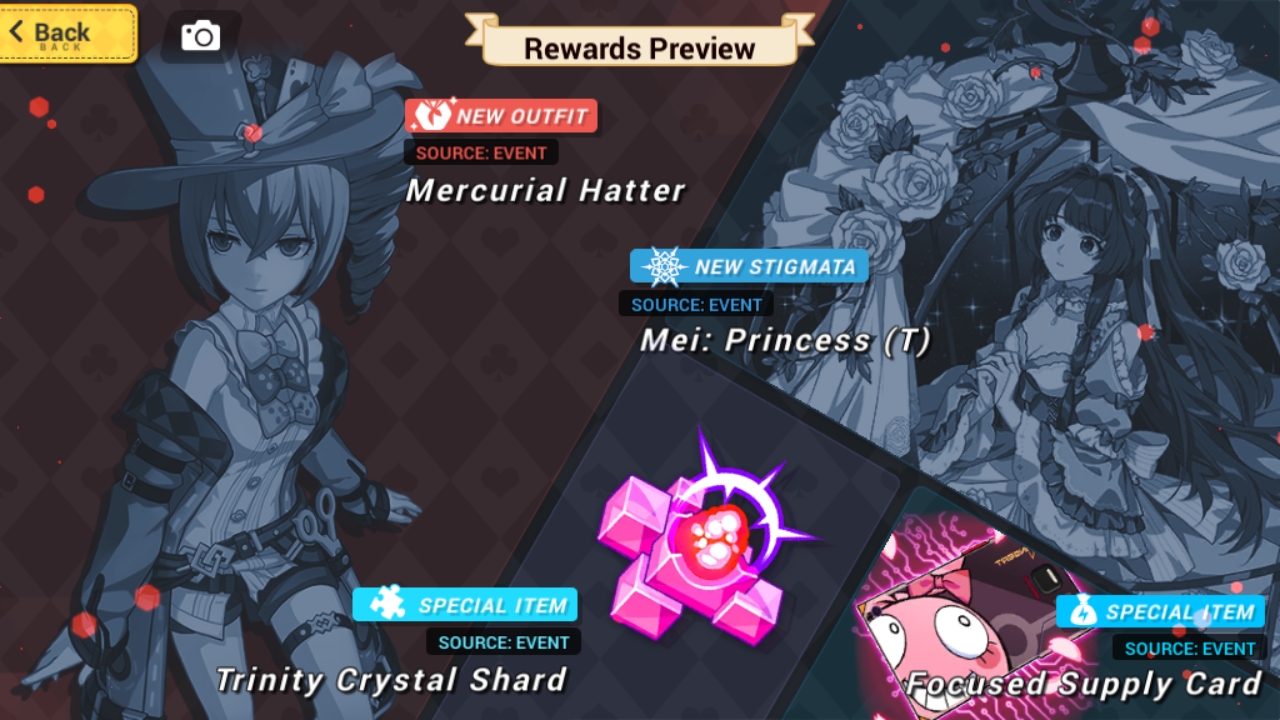 -As for the actual event: it's an RPG styled adventure with layout similar to "Matrix maze" where you collect chests interract with NPCs solve some easy puzzles and with combat varying between a rhythm game, fighting some mobs or fight a boss (you get to fight 2 bosses day 1)
some of the NPCs give some important clues  so make sure you don't skip the dialogue especially when interracting with a cold heartless questionmark or a homu snowman.

DISCLAIMER: unlike previous events this event is more focused on solving puzzles and paying attention to the NPC dialogue, you can even skip some major fights if you follow the NPC hints.

Mobs: Triggers a fight with a group of enemies

Question mark: A puzzle event solve it to reveal a path

Road Sign: Road signs have important info and clues to help you with the current stage make sure you read what these have to say.

Chests: Chests are where you get most of your clocks, but they occasionally give out some key event items.

-Some event mechanics:
Some NPCs (some NPCs can join without a fight like Kepler) can trigger a battle event where  you either get a rhythm battle or a boss fight (like in fu hua's case) when you defeat an NPC they join you as a companion collecting companions increases your party's damage during a rhythm battle.

The Menu has 4 main pages Team/Album/Item/Event:

Team: shows your collection of companions and their descriptions (you can also set a leader from this page).

Album: similar to the ingame album though a little longer, you can rewatch the story that you've cleared before.

Item: your item collection, you'll earn items throughout the story from chests/interracting with certain NPCs, some of these items are vital in progressing through the story so make sure you explore everything.

Event: this is your main and side quests page it helps guide you through the story if you ever feel lost so make sure you check it every now and then.

Rhythm game: it's a basic rhythm game that uses your collected companions as ammo, your current power scales with how many companions you've collected and your dmg depends on your timing, a perfectly timed tap is 150% power and a "good" tap is only 100% obviously a "miss" deals no damage, consistently timing your attacks fills the FUNKY ZEIT(zeit=time in german) filling the FUNKY ZEIT bar lets you enter the FUNKY ZEIT mode for 5s during FUNKY ZEIT your companions deal alot more damage upon defeating the enemy you can end the battle and move on with your adventure.

The combat: you'll encounter some mobs/bosses in rhapsody fairyland where you use some preset valks and gear(so everyone has equal chances) my personal favorite team that i had the most success with is Yamabuki(Psychic Bronya) Miko(Creature Sakura) and Memento(Mecha Sakura) team clears the fastest while being relatively safe thanks to yama's shield, though most enemies are super squishy so it doesnt matter what you use.

Note: you do not need to engage in combat 100% of the time, the hardest fight in Prankster's Woods can be avoided by going behind the boss and backstabbing him(to do so you need to interract with the x-mas tree that has a colored top).

Footage credit: Mogawty
Note2: Make sure you check every nook and cranny, and pay attention to the dialogue (Ex: the colored trees/colored homus/kepler behind the snowman..etc), the dialogue is usually entertaining and it's reasonably short so no real reason for players to skip it.