In this guide, I will go over just how much damage GK can realistically do in a controlled setting with different gears and teams. For this guide, I will assume a level 80 Rank S GK, with each weapon and stigmata leveled to 50, or their respective maximum level. Stigmatas will not have any affrix skills. The enemy in question will not have an elite shield active, and will have 1000 DEF and no typing advantage or disadvantage. 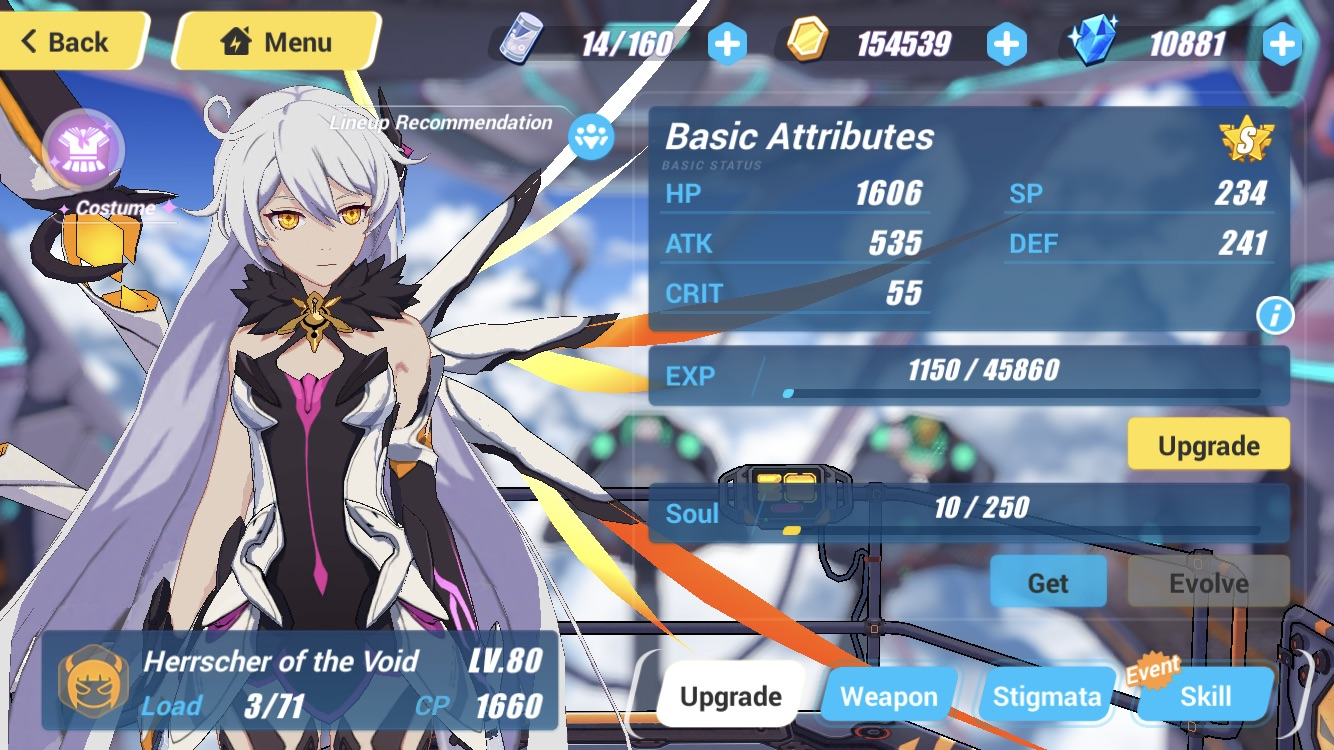 Let's do a test run and see how much damage a naked GK can do. The damage we are counting is going to be QTE > evasion > 3 hits > snap finger(with full bar) > ultimate. Lets see the base multipliers GK will have.

But that is enough of talking about a naked GK. There has been a lot of talk about how unobtainable GK is to f2p players. “If you pull her you NEED her signature stigmatas!!1 It would be a waste of crystals pulling for GK if you cannot gear her!” We have all heard the rhetoric but lets see how accurate these statements are. I have crunched the numbers for multiple scenarios. We will see GK with various guns, with various combination of stigmatas and with various team ups with and without support gear.

What gun do I take?

And the results are in! Turns out keeping GK naked will not let her hit her full potential! Right of the bat, it looks like we got some interesting numbers. Keys of the Void (VK, void key) can be great when it comes to shield breaking and regening Herrscher Charge, but when it's put into action vs Tranquil Arias in terms of damage, Arias edges out nearly 20% more damage. However, most people anticipated that Arias, which has led the game towards the qte/switch heavy meta, would keep its title as top gun, not too much of a surprise there. However, it is quite interesting to note that Thunder Kikaku, a gun that has been mostly pushed to a supportive role on judah teams after it was heavily nerfed in other servers, does very well for itself in GK's hands. There's no question VK will perform better in practice, with its active skill, but from the numbers, Kikaku is a very promising 3rd choice without losing out on too much damage, dealing only 17.6% less damage than arias.

The surprises doesn't seem to end there however, at second place, with just 2% less damage than a “fully geared” GK, MichaelAngelo set makes a strong comeback into the meta. MA had always been THE top tier physical damage set and when it was released, it pushed out older sets like normal Celine (that sounded like normal saline aka 0.9% NaCl lol), S.Lier (who lost a lot of its popularity after the abyss rework), and Cecilia Schariac. However, its reign was short lived when strong burst valkyries like NS was introduced and the very flexible Schrodinger Band set was introduced. It did not help that the only valkyrie that used MA to its full potential was SD, who is only used as a damage dealer to certain bosses in MA (memorial arena, not to be confused with MichaelAngelo). SD uses MA in MA… that can get confusing. Ironically, MA T and B works best paired with Eka M, another stigmata that has been overshadowed recently, by Planck M.

However, with GK being introduced in the game, her kit fits perfectly with both Eka  and MA. GK has high range attacks with plenty of multi-hit combos that will quickly build the stacks for MA's bonuses and the requirement for Eka M. GK, despite the false rumor, does NOT use burst attacks in Herrscher mode which means it she benefits completely from MA, and with high crit rate, can naturally exploit MA B's insane crit damage bonus. GK's high damage qte and ultimate means Eka M is a far better choice than Planck M by more than 10% extra damage per rotation. Gk's ultimate also lasts 3 seconds long, which is the full duration of MA's buffs. Plus, GK wants to tag out after her rotation to begin setting up for her next rotation and for Arias' buffs, which fits perfectly with MA's 2 set bonus. It is quite refreshing to see that one of GK's best set-ups require zero gears from her equipement expansion supply. For those of who had the fortune of picking up these older stigmatas will be in for a nice treat.

Unfortunately, just as GK has a high damage ceiling, it also has a low damage floor. Without the three aforementioned guns, GK's damage, with guns like Mjolnir and Shamash, will be a less than 21% and 28% respectively less than Arias'. Without optimal stigmatas, This can go as far as 50% less than a fully geared GK. However, so far it would seem GK is not as picky as some first imagined when it comes to what's viable. MA and Eka are both available in the exchange house and Arias and Kikaku has been featured multiple times and are great on multiple valks/teams.

So far we have looked exclusively at GK, now it is time to take a step back and see a wider picture. Celestial Hymn (CH) has been an inseparable duo with GK in the current meta. Can a cheaply geared GK still shine with a good team behind her back? How crucial is CH to GK teams? To answer this, I have taken the top, middle, and lowest set up (that wasn't naked GK) and put them into the supporting hands of CH and Snowy Sniper (SS). The most common alternative to the CH SS duo is VR and DB, so we will test that as well. Finally, everyone always says to go for dps gear before support gear. “You need a strong dps else your support gear will be useless!” Let's see how true that statement really is. In my fully geared CH/SS team, I have given CH her signature cross, 11th relic, and signature stigmatas, Kallen Hymn, and given SS Tesla Band T, and Gustav M/B. For the teams without support gear, they are given Theresa Origins set.

If we take a look at how the damage changes, with and without impair, a fully geared GK will gain a near 40% damage increase with Mjolnir's 80% impair. Yet not all sources of impair is equal. When CH arrived, not only did she gives a reliable 75% impair from her ultimate, her passives also gives her team an additional 30% crit damage multiplier and 25% physical damage multipliers. Her impair also lasted 10 seconds and is unaffected by time slow so DB can be replaced with SS who gives a hard fullscreen CC in freeze and increase the physical damage taken multiplier by 35%. Compared to no impair, a CH/SS team will see an astonishing 122% damage increase, that is over double the initial damage. Compared to their Mjolnir VR counterpart, CH/SS sees a big 58% damage increase. Now if we look at a fully geared support team vs a budget support team, you see another solid improvement of 51%. You can gain anywhere between 50-100% more damage by investing in CH but only another 50% more damage by gearing two supports with top end gear. 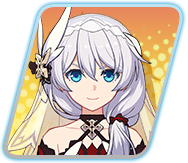 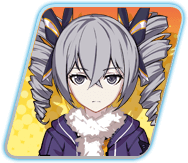 Next, let's check out our other two scenarios of our partially geared GK and our f2p option GK.

What we end up seeing more or less the same trend with simply using the support duo of CH and SS giving about an 120%. Compare this to getting support gears, which gives an increase of 46-59% increase, it is simply not worth it. A semi geared GK will do 30% more damage than a fully geared GK without CH. Compared to a fully geared GK, a semi geared GK, both with CH, there is only a 18% difference. When it comes down to it, it looks like the most important and cost effective part of GK is her partner in crime CH.

Overall GK can be greatly improved with the correct weapon, stigmatas, and team set-up, but if you have to prioritize one, it will have to be the one-girl support army that is Celestial Hymn. Second, a lot of people say GK is unaccessible for most people who do not spend incredible amounts of money on the game, but that is simply not true. A lot of people say GK “needs” her signature gears, that generic damage stigmatas will be underwhelming or useless. They say that it is not practical for f2p players to invest on gears that will only benefit one valkyrie. While it is true Celine: Ascendant set is currently unviable for other valkyries but its necessity has been somewhat exaggerated.

In fact, her best gun is not her signature gun. It is a top tier gun that can be used by many other valkyries. For those who do not have Tranquil Arias, the second alternative in Thunder Kikaku should not be overlooked. It has an unrestricted +30% physical damage passive that can literally be exploited by any current or future physical damage dealers. Not only that, it is also one of the best judah team support weapons in the game. That is a lot of value packed into a single gun, which's damage is neck in neck with GK's signature gun.

When it comes to Stigmatas, let's look at the numbers one last time.

Yes there is no denying Celine Ascendant is the better set, however, in each rotation, MA/Eka hybrid set will only deal 2% less damage. Just like it was with GK's weapon, there are viable generic alternatives to her stigmata choices. MichaelAngelo is the best physical damage stigmatas in the game, and will likely benefit any non-burst mode physical valkyrie introduced in the future. Likewise, Ekaterina M has been the generic physical stigmata since the day it was introduced into the game. All three pieces are in Exchange House and Eka is even rumored to be farmable via Time Swirl in future updates for Global. All in all, GK rewards those that invest in stigmatas, weapons and good support. In terms of supports, CH is the golden standard. Her Stigmatas and weapons however, are more flexible with top tier generic physical damage stigmatas being nearly as good as her signature set and two very solid alternative guns that can even outperform her signature weapon.