Herrscherr of the Void (HoV) just hit Global and she already exerts her presence as our powerful queen. Flashy moves, sharp looks and sexy voice? You just can't let her potential go to waste, and this article may help you with that.

Please note that this guide is done mainly for S-rank HoV. While it briefly mentions other ranks, the main focus is still S-rank HoV.

HoV presents herself as a creature-type powerhouse that not only outputs immense physical burst damage but also can deliver high sustained firepower. With most of her strongest attacks having large AoE, she excels in Abyss (even more so, with her being creature type having advantage versus the bulky psychic enemies in Abyss). Her skills also allow her to deal with Mech enemies decently so she doesn't desperately need a secondary DPS valkyrie to accompany her. Even though she's mostly used in Abyss, HoV can also perform quite well in Memorial Arena (MA) against several bosses without much difficulty.

Like any other valk, HoV has a bunch of pros and cons. Her advantages are:

She also has some notable disadvantages:

Let's look at her skills and have a short analysis over them. 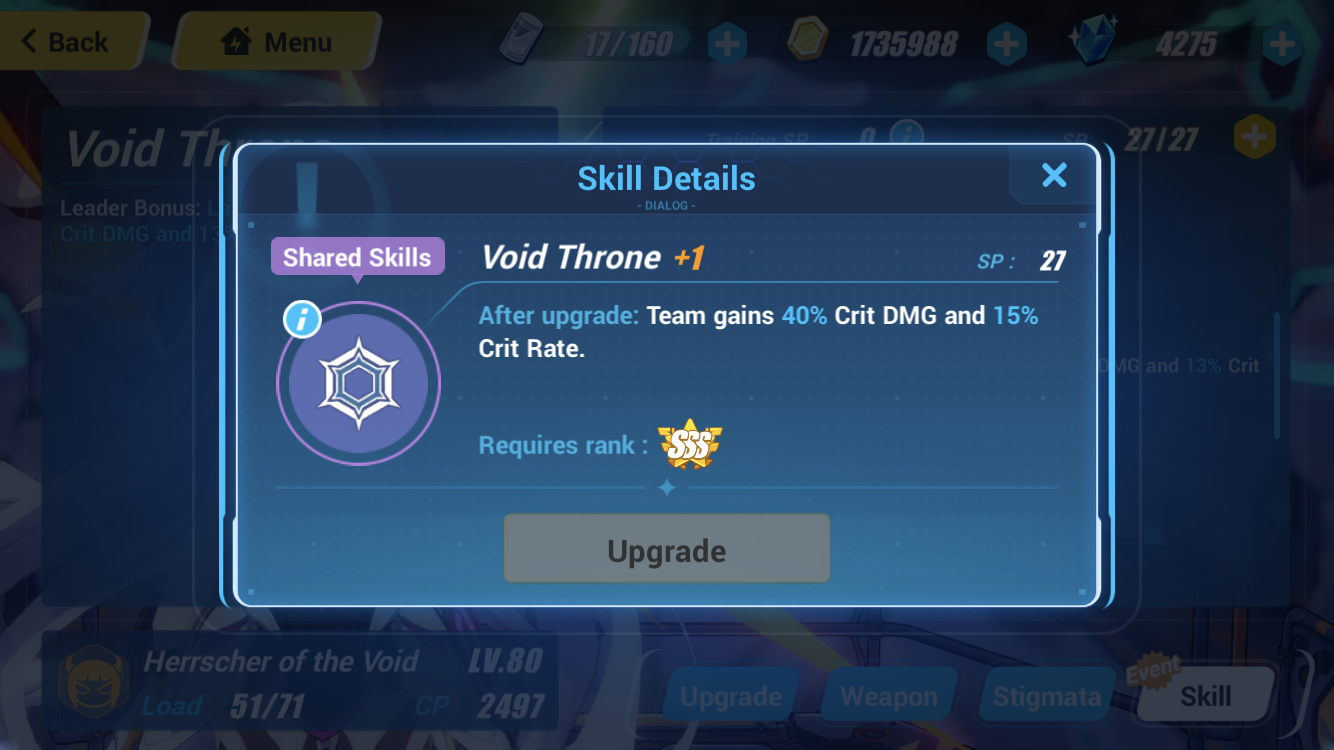 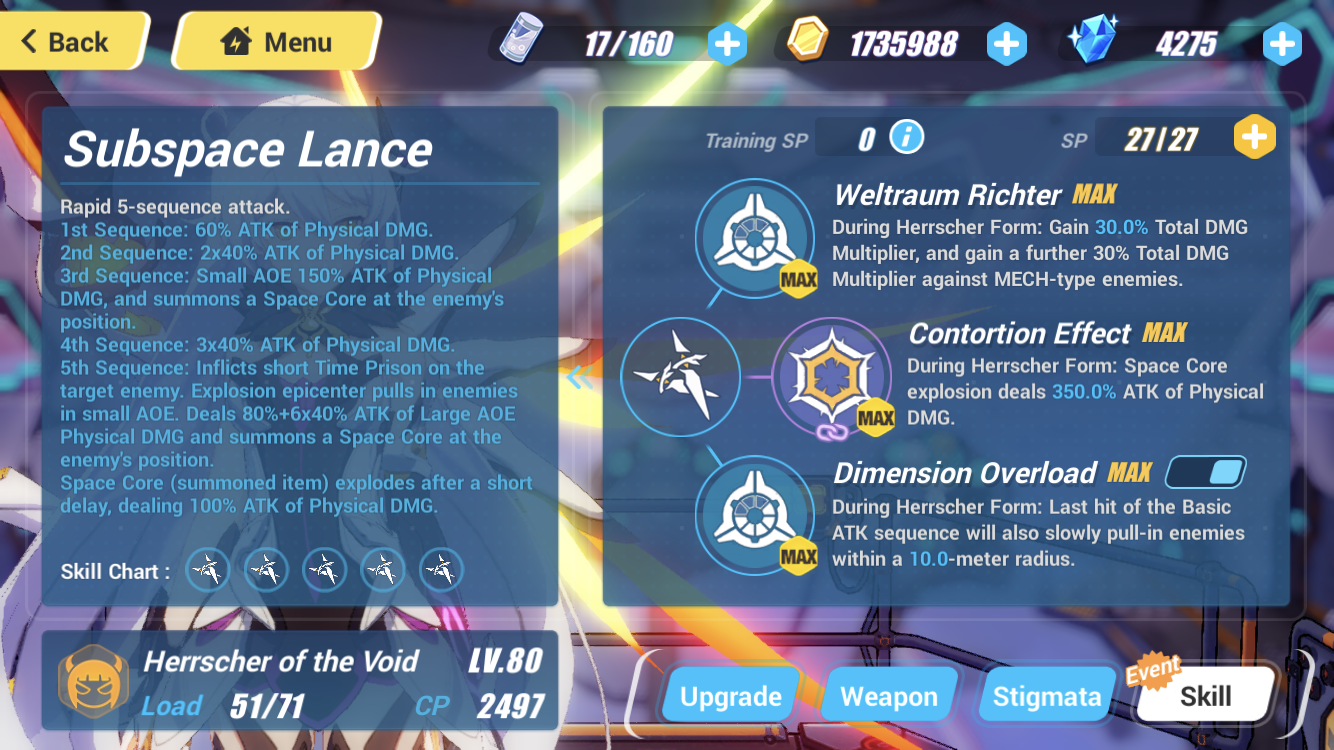 HoV has a series of projectile attacks that will create a Space Core and fill up her special bar. Every 3rd and 5th attack will summon a Space Score and give 60 Herrscherr. You can see from the skill chart that a lot of her skills require HoV to be in Herrscherr Form to work, so her fighting style will revolve around this bar. 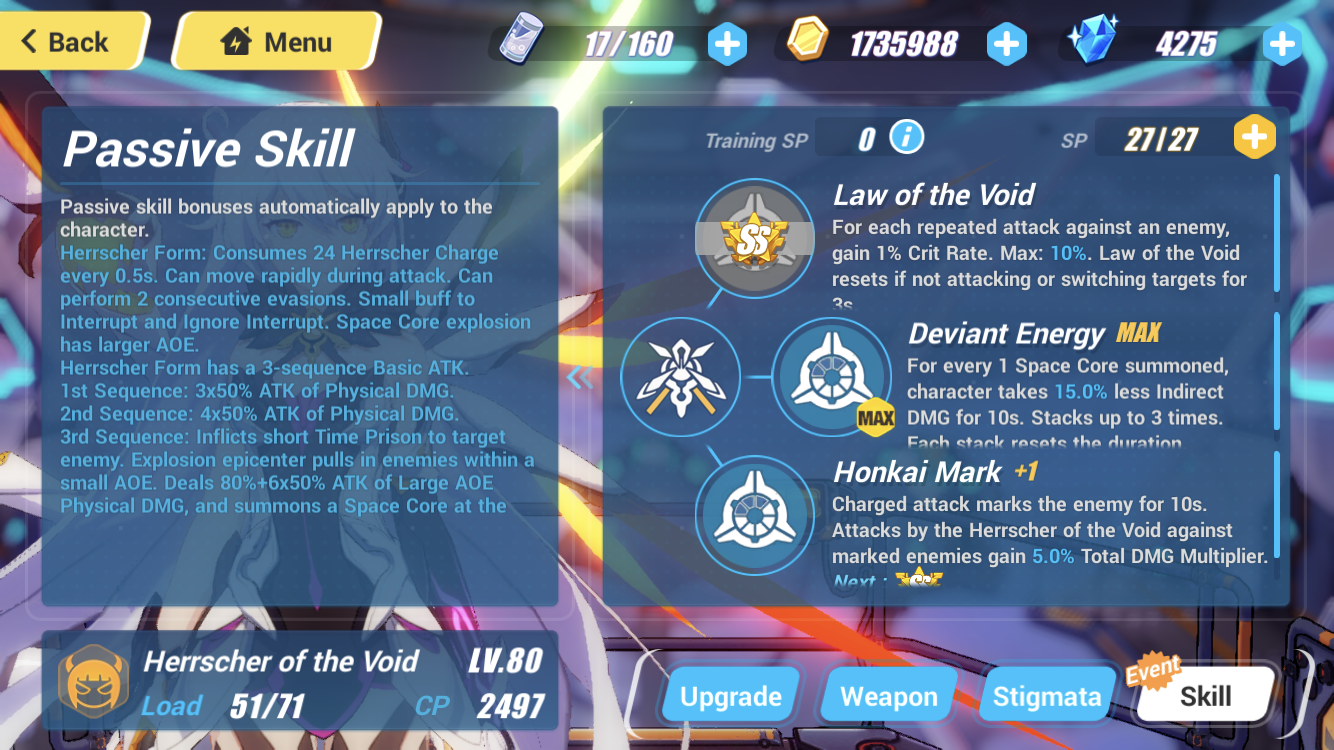 HoV has a special form called Herrscherr Form, which needs at least 240 Herrscher Charge — or 1 bar — to activate (by using the charge attack mentioned in the Special Attacks section below). You can have 480 Herrscherr Charge at max — or 2 bars. Once in her Herrscherr Form, she consumes 24 charge / 0.5s and get various benefits. Upon switching out she will also lose a chunk of Herrscherr Charge too. Notice that she gains some indirect dmg resistance (e.g bleeding) with her attacks, so she can stay on-field in Abyss for a bit longer. 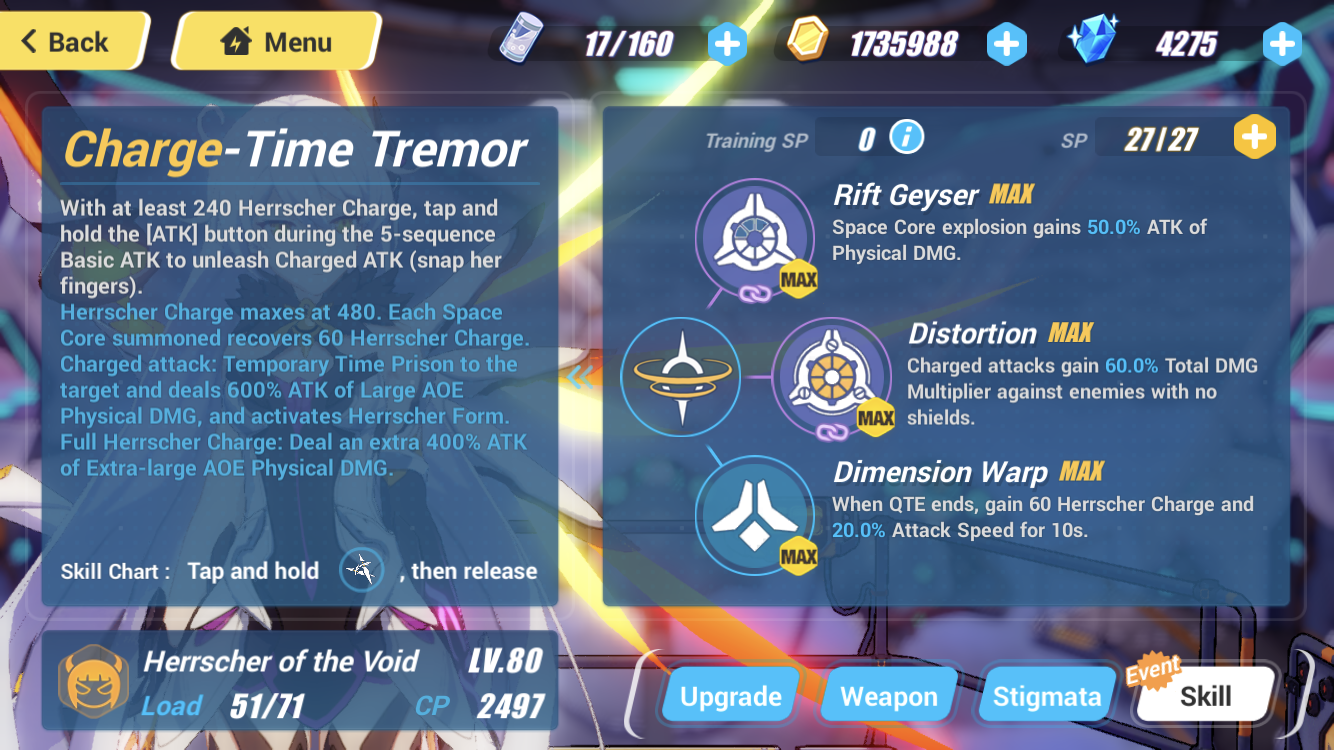 Her special attack is a charge attack (which needs at least 240 Herrscherr to trigger). You can tap and hold ATK button to do this, which will also send her to her Herrscherr Form. Be noted that there're 2 levels to this snap, either 600% ATK without full bars or 1000% ATK with full bars. The latter has much bigger AoE and deals a lot of damage. 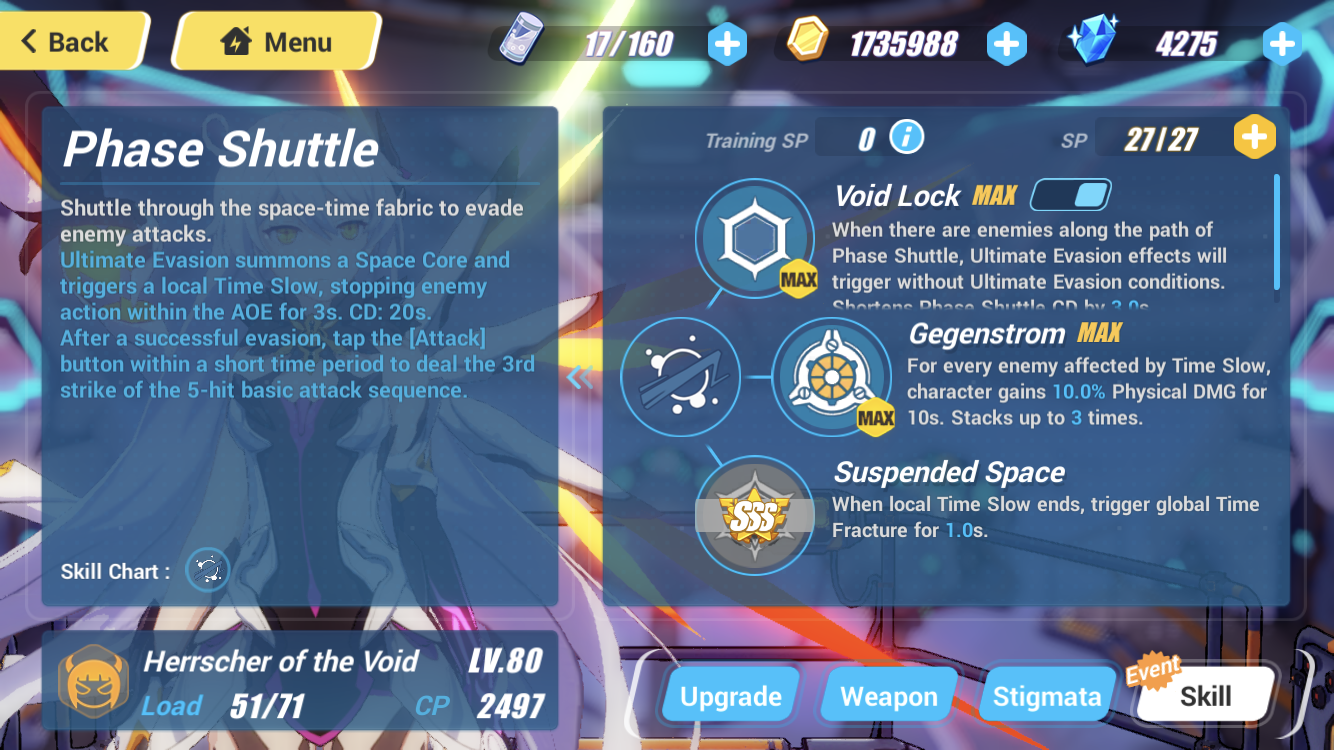 HoV has an interesting dodging mechanism that allows her to pass through targets to time-lock them (no more being trapped by Mech in the corner!). She can also do Ultimate Evasion objectives in story and such with this. After the dodge, you can tap ATK and immediately do the 3rd attack to gain 60 Herrscher Charge. Also remember she gets up to +30% physical dmg with time-slowed enemies, so remember to do this before your big attacks. 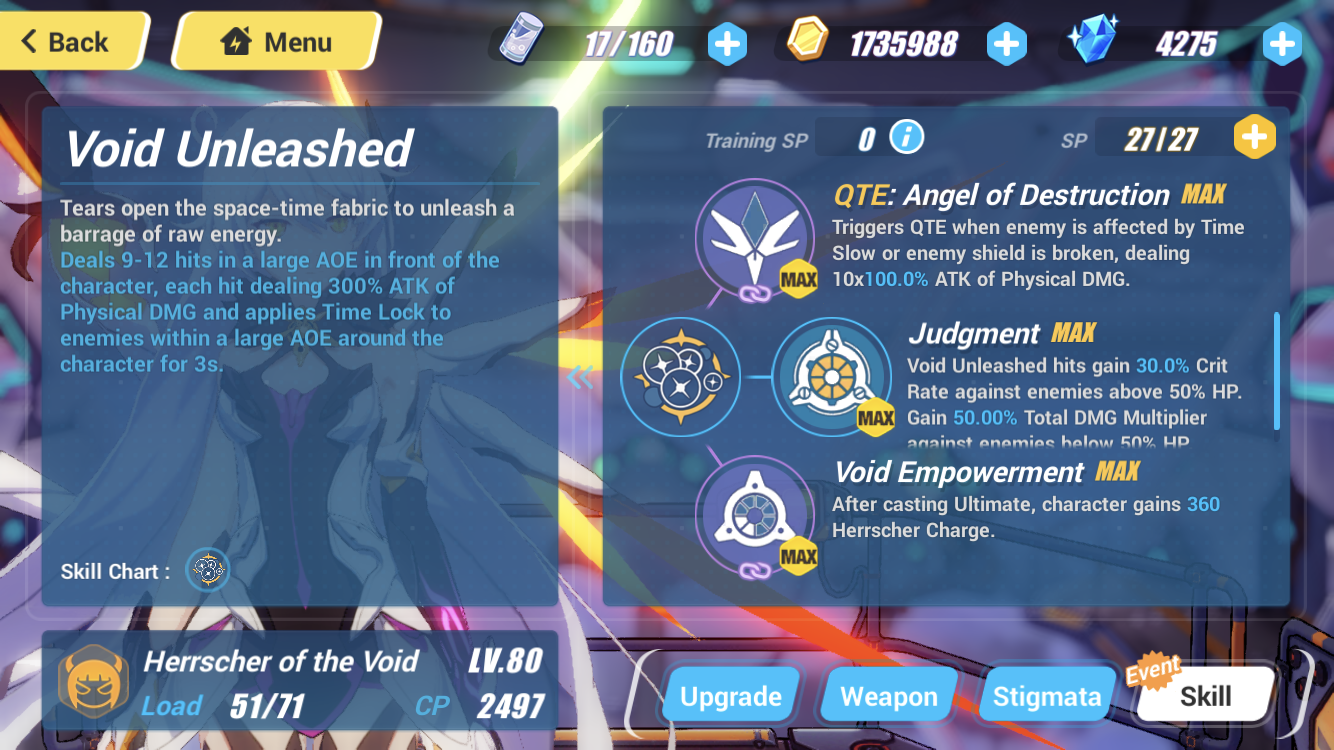 Can deal up to 3600% ATK to a large area and time lock them afterwards. Quite straightforward.

HoV unlocks Void Empowerment to regen 360 Herrscherr Charge (1.5 bar) after ult if you have her at SS-rank. Or an easier (but more grinding) way is to get your KMB to SS-rank, which will give you the same skill. This skill is quite important in the Abyss so you don't have to collect Herrscherr Charge again after ult. Without this her effectiveness will suffer quite a bit.

From the skills chart, we can see HoV doesn't exactly have the best multiplier bonuses. Her skills revolves around her Herrscherr Form a lot too, so be sure to have at least 240 Herrscherr Charge or 1 bar filled as you switch her in. We'll cover her gameplay a bit later in the lineup section.

HoV has limited choices when it comes to gears. Since her use is mainly for offense, we will look at that aspect first.

Weapon wise, Void Key >= Tranquil Arias >> Mjolnir >= Kikaku > Shamash. Void Key is slightly better than Arias (though the difference is bigger on higher Abyss temperature, and in Memorial Area). Mjolnir is also a decent option with 15% crit rate and high impair. Kikaku can also be used, it's universally good on any DPS Kiana. Lastly, Shamash is the best 5* gun you can offer, but its active has to be used wisely.

It's often debated whether Arias or Void Key is better on HoV. There's no definite answer on this, since they are used a bit differently. As you may have guessed, Arias is better on frequent switch cases, while Void Key is better when you keep HoV on-field. Void Key will prove better in Memorial Arena when HoV is the main DPS valkyrie since she has to utilize her Herrscherr Form a lot (which will last way past 5s of Arias).

For Abyss, there have been discussions about this, and the answer is they are quite at the same level, but Void Key is slightly better. From this video, at 182k temperature Red Lotus showcasing both Void Key and Arias — we can see they have almost the same clear time. However, with Arias, HoV has to end the fight with her ultimate, while Void Key doesn't. This means Void Key is a whole ultimate faster than Arias. While this may seem negligible since you can just collect SP back at the beginning of the next floor, at higher temp, Void Key will just get better since Arias requires more ultimate, which needs more SP and the high bleeding may prevent you to do that.

So, the conclusion from me is that Arias and Void Key are both good on HoV, with a minor advantage for Void Key. Void Key unlocks more possibilities for HoV (higher Memorial Arenas score / higher temp Abyss), but if you already have Arias and are not sure if you can afford Void Key, I'd suggest not going for Void Key since Arias is already good enough. In fact, my HoV is still using Arias at the date of this writing since my Void Key isn't upgraded.

Stigmata wise, her signature set is the best choice for her, but there can be a few other choices that can partially do the job. Let's go through some sets. They are ranked in descending order in terms of firepower.

2. Asc.Celine T B + Eka M. In exchange of 80% crit dmg and 15% crit rate, you get 41% physical dmg. Slightly worse, and you have to maintain combos to make this set properly, but still a strong set. Be noted that Eka M > Planck M since her ult / QTE doesn't benefit from Planck M.

4. Cleo T + Eka M + Attila B. This set is probably the strongest Abyss set for HoV without her signature stigmata. Be noted that this set is significantly worse than her set and may or may not deliver her best potential. Still should do okay in Expert Red Lotus Abyss. 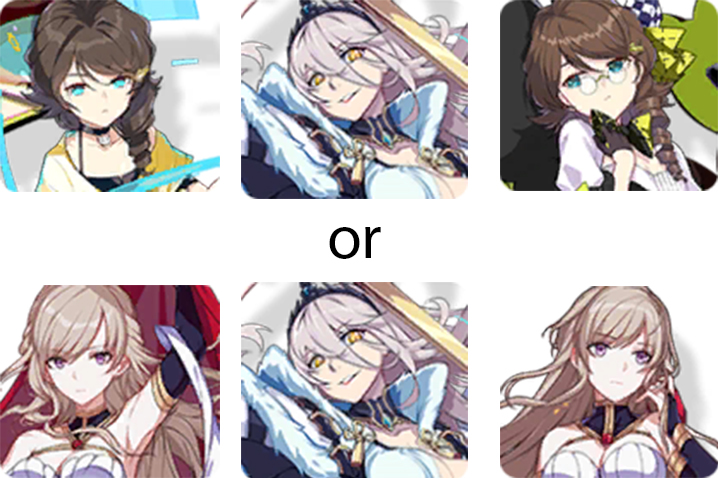 5. Michelangelo T B / SchroBand T B + Eka M / Planck M. This set is heavily about her normal attacks and snaps. Most bonuses from Michel / SchBand will wear off after half her ult duration. 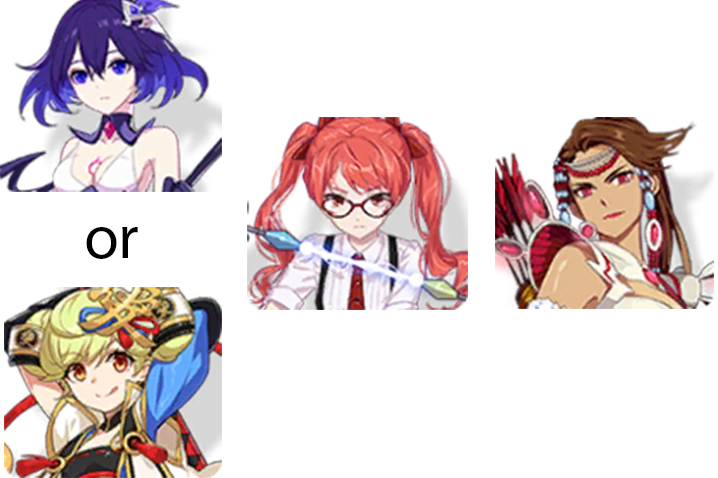 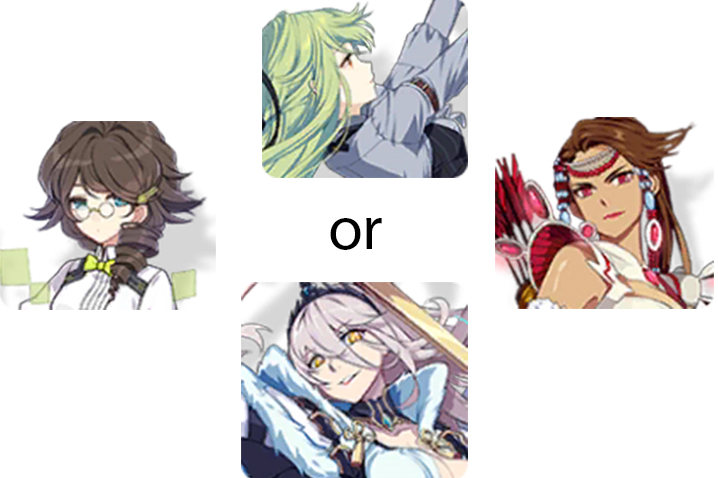 There's another set that you can play with, Schro T + Eka M + Attila B. This set needs practice to function. Basically you build up her bar to full, then switch out. As you switch in, immediately do the snap, then proceed to ult. This build is fun to play but not really efficient.

HoV can also be a good support in Memorial Arena, with her on-demand and complete Time lock (similar to Valkyrie Triumph's ult). In this case, you can plug in the universal support stigs Mei Beach M + Newton B with either Shamash gun to buff damage or some other utility gun e.g Artemis Guardian to trigger other valkyries' QTE. 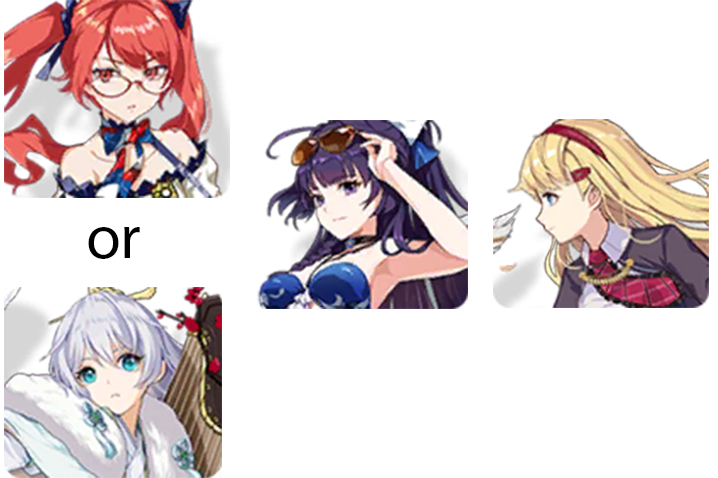 Before we go into this part, we need to set some right expectation for HoV's performance in the Abyss. The current Abyss favors physical damage with impair as the temp goes higher, but below certain temperature (180k~ in Red Lotus Expert Abyss), elemental valkyries will likely outperform physical valkyries with the same level of gears. This is due to elemental damage goes through shield and is deducted not just from monster's DEF. Thus, it's normal to see Shadow Knight clearing Agony Abyss much faster than HoV lineup.

Another important factor for HoV to perform well is impair. Impair is pretty much essential for HoV at higher temperature to function, so HoV will not be at 100% power without impair from Celestial Hymn / Yamabuki Armor / Kianas with Mjolnir etc. Again, this will be relevant only in higher temperatures as monster's DEF is much higher there, resulting in higher DEF reduction from impair.

So 2 things to remember, HoV will only be destructive at higher temperature (though she's still good at lower temperature, just not as good as elemental valks), and with impair support. With that in mind, let's see how to utilize HoV in the Abyss.

As with any physical DPS, HoV benefits a lot from impair. CH and VR with Mjolnir would both do the job but CH is definitely better with longer ult duration, SP collecting, crit damage & physical dmg bonus. VC would be okay too but you need SSS rank on her.

For the 3rd, you can either get a support to further HoV's damage, e.g Snowy (at SS-rank) / VT / DP (especially vs the last boss) or a secondary DPS to take care of the mech in case it's too tanky for HoV. On Global though, we don't really have a good physical Psychic valk so normally it's a good choice to pick another support to further boost HoV's damage.

No matter which supports you pick, the gameplay is similar. It is to have gatherers / HoV collecting SP (and full Herrscherr Charge) until the 2nd wave hits, then do gather + Snowy / VT ult. HoV switch in and dodge through enemies, then snap + ultimate. Afterwards, do another series of attack before switching back to gather to keep Herrscherr Charge. Rinse and repeat.

The most common lineup for this is HoV + Snowy + CH. Snowy can either have Planck full set or Sloth B to get SP fast. The same can be done with VT. Be noted that VR is probably better off with VT since VT's ult has Time-lock which helps retain the impair from Mjolnir, while Mjolnir's impair won't last after Snowy finishing casting her ultimate.

HoV can also act as a secondary DPS to take care of psychic enemies. In this case she could accompany SK as main DPS. CH would still be important here to impair and collect SP in HoV's downtime.

Here is an example of my HoV lineup to clear Myriad 24F at 200k temperature. Notice at the end I use Snowy's ultimate first before CH's ult to keep Newton B's effect until HoV comes in.

HoV can function quite decently as the main damage source. With her best gears, she can get 29-30k on a lot of bosses in Lvl70 bracket, including Assaka, Doom, Parvati, Jizo, Kallen, Homu King, etc. At higher rank she can even do other seemingly impossible bosses like Benares and such. Including here is my video featuring HoV casually soloing Assaka with Divine Prayer in backline (notice I used Tranquil Arias since my Void Key is not maxed).

The strategy is quite simple, just use HoV normal attacks to collect Herrscherr Charge then analyze when you can snap as the shield breaks, enter Herrscherr Form and output damage accordingly.

HoV can also be a support on any boss, notably on RPC due to its annoying stances. Having complete Time-lock is very crucial to get a high score. In this case, she needs support stigs such as Newton B and Mei M, or evasion cooldown reducer like Zhuge T / Shakes 2 set / Asc.Celine M.