Hello Everyone, I'm gonna show you guys how to get SSS easily in MECHA DEFENSE.

Ranged Mechs are necessary. So is Baldur. Mech bombs could be useful when you don't have powerful ones. Deploy mechs according to weathers (Is it UP?)

Mecha Defense has 3 lanes, top (2 positions), middle (1 position), bottom (2 positions), which could be similar to Dota 2 or LOL. Due to limitation, melee mechs cannot support other lanes after killing enemies shown on its own lane. Moreover, melees (not including schicksal types) walk much slower than other types and their attack speed waste time. It is NOT recommended to deploy them even if they are powerful while attacking. However, you have to deploy them if you don't have other ranged mechs.

In order to get SSS, we have to kill all enemies (5 rounds totally) in 60 seconds. Hence, ranged mechs could be a good choice. For example, Storm, Lightning and Hammer could use AOEs and missiles. They are also carries on their own lanes. Spiders have strong and powerful AOEs which cover the whole map though their cooldown is a little bit long. Shamans could be deployed if you have strong mechs. However, they cannot attack, which means they are useless when you don't have powerful muscles.

Deploy it if you have.

Deploy it if you have. It's better to deploy it on the middle lane.

Could be deployed on the top lane or the bottom lane.

Similar with Iskandar, quick attacks, high-damaged missiles. Their attack powers are typically same though their names are different.

Deploy it if you have (according to weathers).

Pure support, could obviously increase the attack speeds and damages of Baldur and Iskandar. However, it is useless if you don't have strong mechs.

Deploy it next to the Baldur or Iskandar (according to different circumstances).

Ranged mech, straight AOEs, could be a "support" carry if you don't have other choices since their attacks are not strong enough.

Could be deployed, according to weathers.

As known, the difficulty increases as your Ai-chan's Tech Level increases. Till now, the highest difficulty in mecha defense could be 7 or 8. 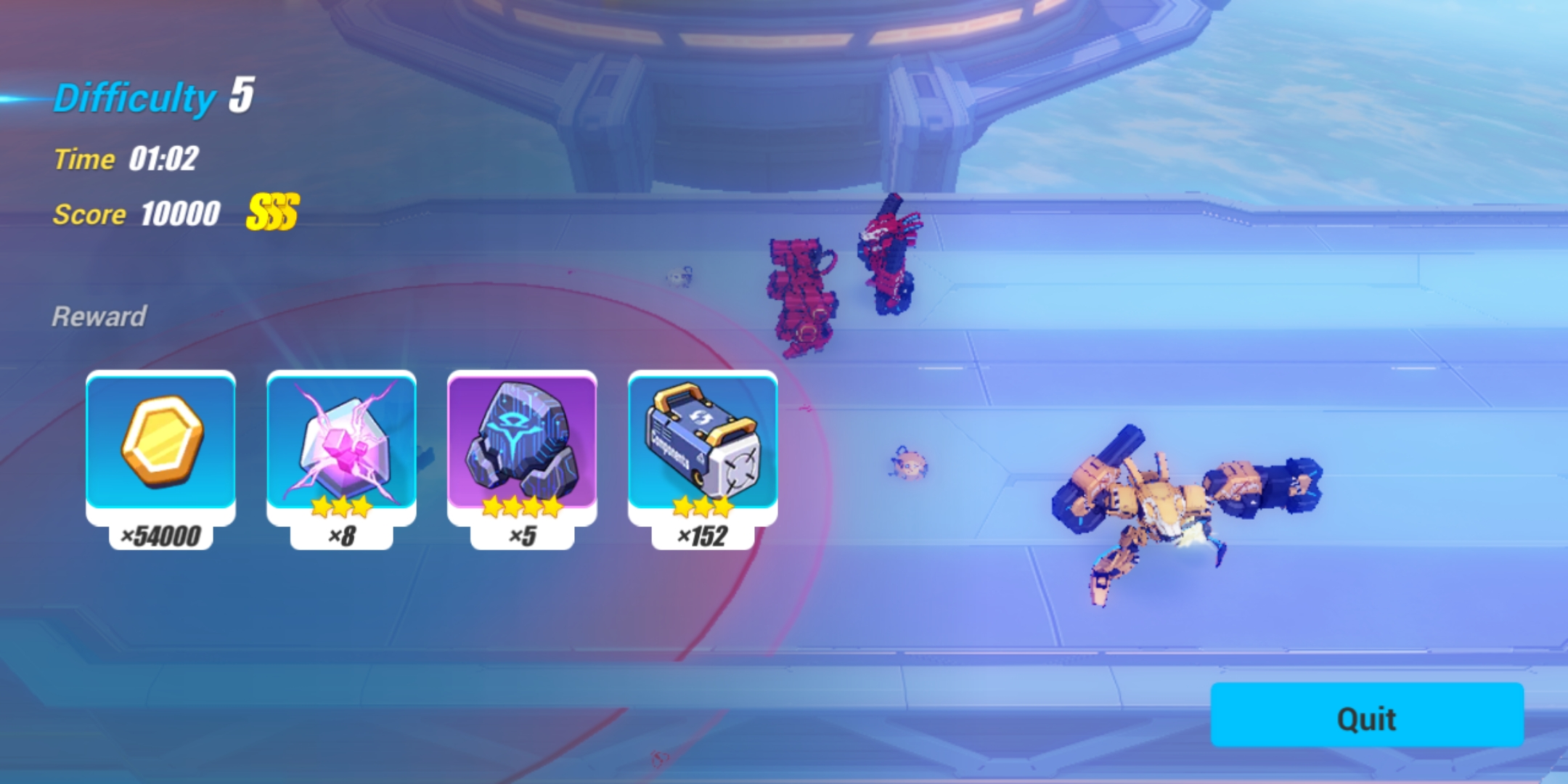 We have to deploy different mechs according to weathers. The same pattern/team may not get SSS in different weathers, For example, when schicksal-type mech is UP, we could switch Hammer/Storm to Ybogi/Ybogi Omega and deploy them on top/bottom lanes in order to kill faster. By the way, even if the melee mech is UP, the performance of ranged mech is still better than melees (in most cases). A counterexample could be found with a Vanguard Axe and a Standard Storm.

If we find that the process of battle is too slow, we could use Save/Load to restart it. It is simple, just give up this round, quit and deploy again. You won't lose the opportunity to battle, even if it's once a week.

You may want to S/L if the battle is in one of the following cases:

2) Some mechs are stuck there.

3) Your skills (Those 3 buttons) don't perform well as you thought it should be.

The airstrike (first skill) should be used after attacks of mechs end in each round in order to kill those low-hp enemies (some of them may be one-shot).

The freeze (second skill) should be used when enemies are born, so attacks from your mechs won't miss.

The improvement (third skill) should be used before ultimate attacks of mechs perform.

In fact, it doesn't matter when you use skills. If you find something is wrong, just S/L to do it again.