The first stage is very simple and easy. 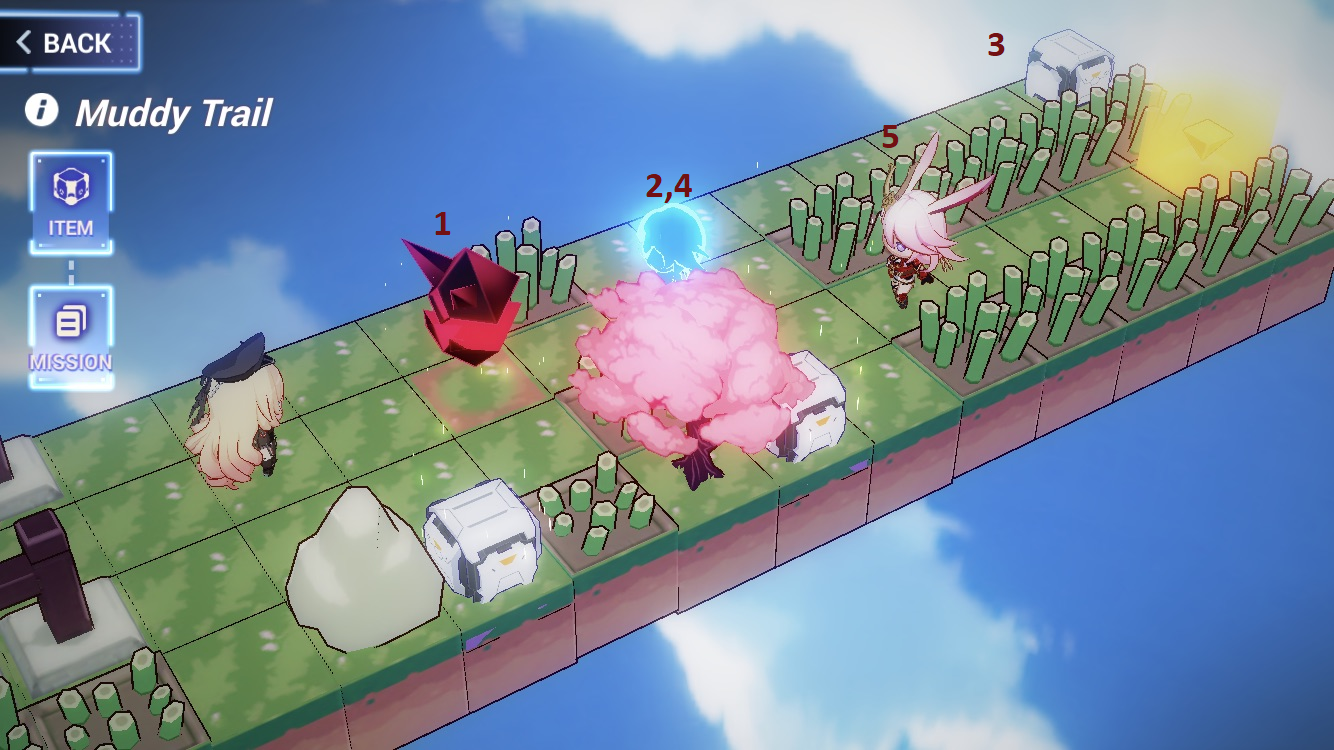 You can simply follow the number for order of interaction. Numbers 1 and 3 are battles; battles in this chapter can be quickly defeated under normal circumstances. Don't forget to collect the Cred-Kards from the crates on the map as well! 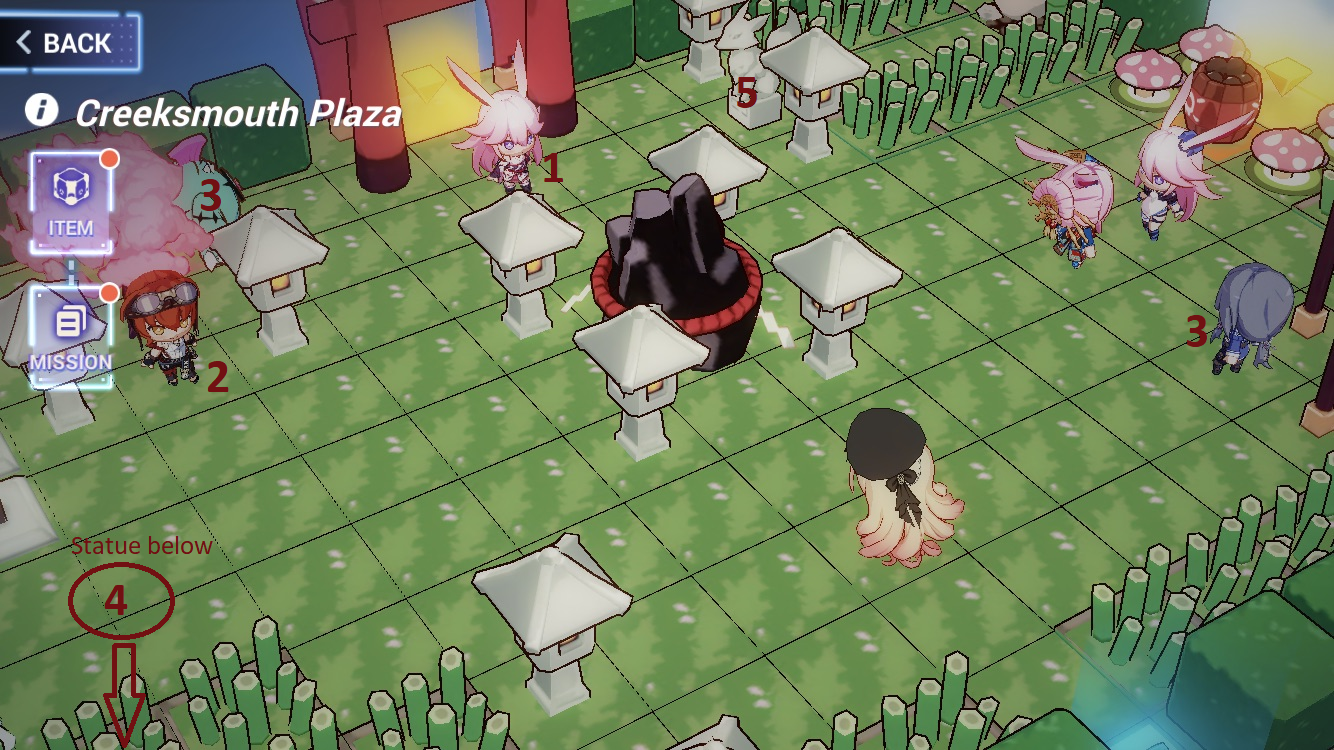 Talking to Himeko (Hawty Potter) will open Mountain Pass to the left.

Talk to Fu Hua (Fu Ironfist) will open Fogwood to the right.

There is also a side quest, get it by talking to the Southwest statue then Northeast statue.

There is a Monster to battle on the North part of the map, you can get a crate after defeating it. 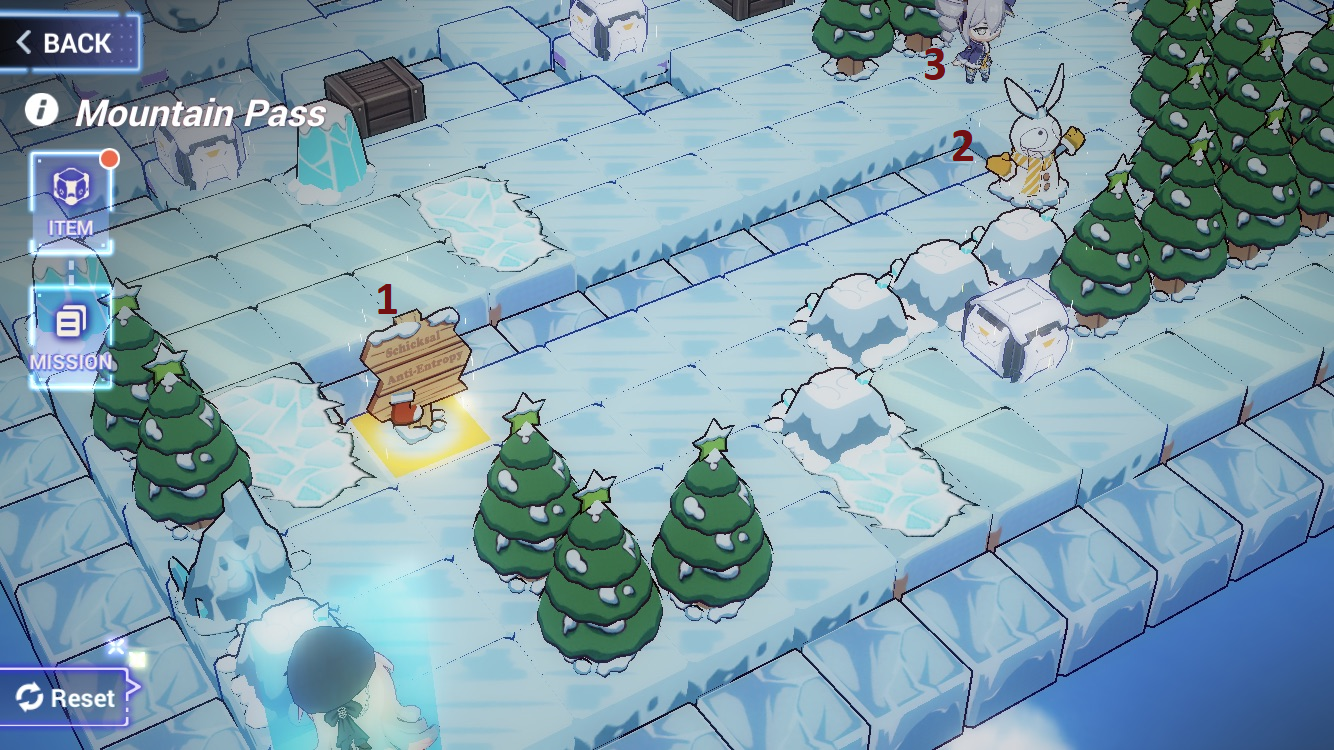 Mountain Pass is a longer puzzle based map. Follow the numbers and interact with them accordingly. Read the sign, then fight the yellow snowman, then talk to the Snowy Sniper (Wolf of the Peak). The Ice tiles will not be passable until you get Boots. 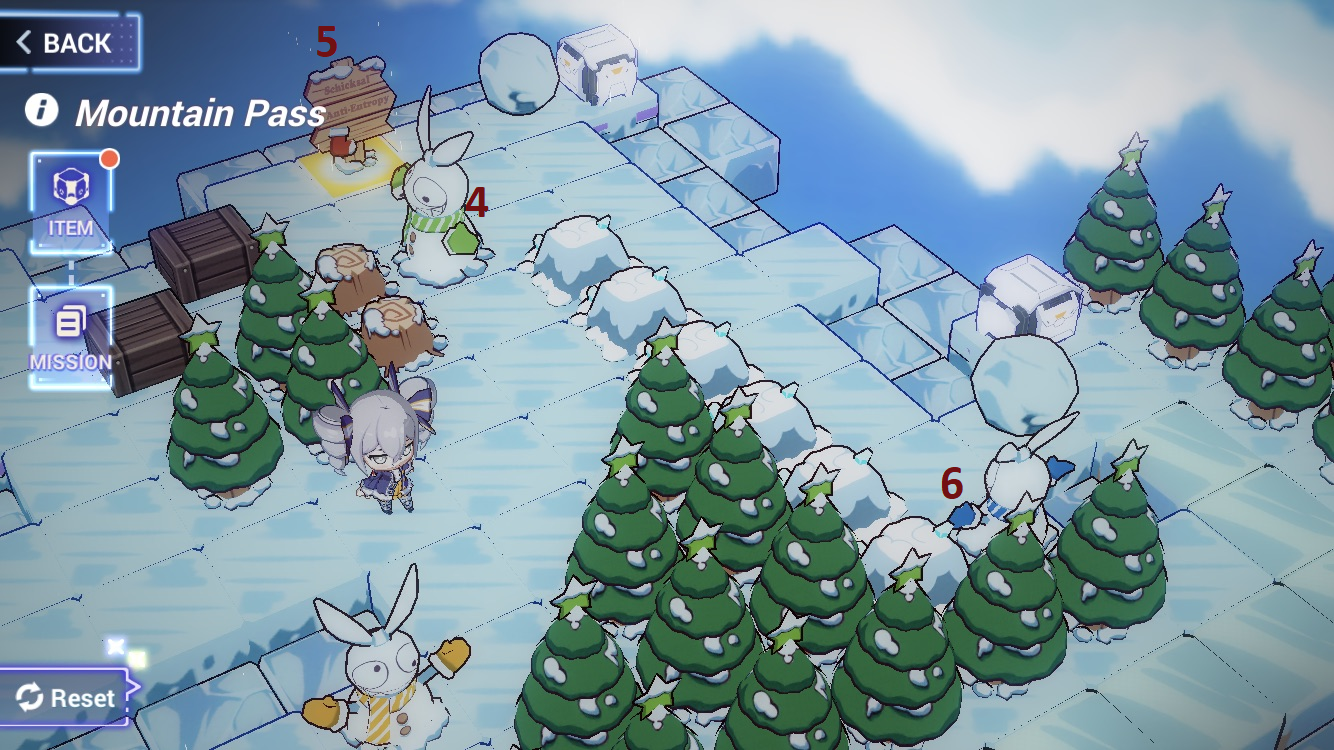 Keep going and fight the green snowman, then read the sign, then fight the blue snowman and receive the glove that will let you move boxes. 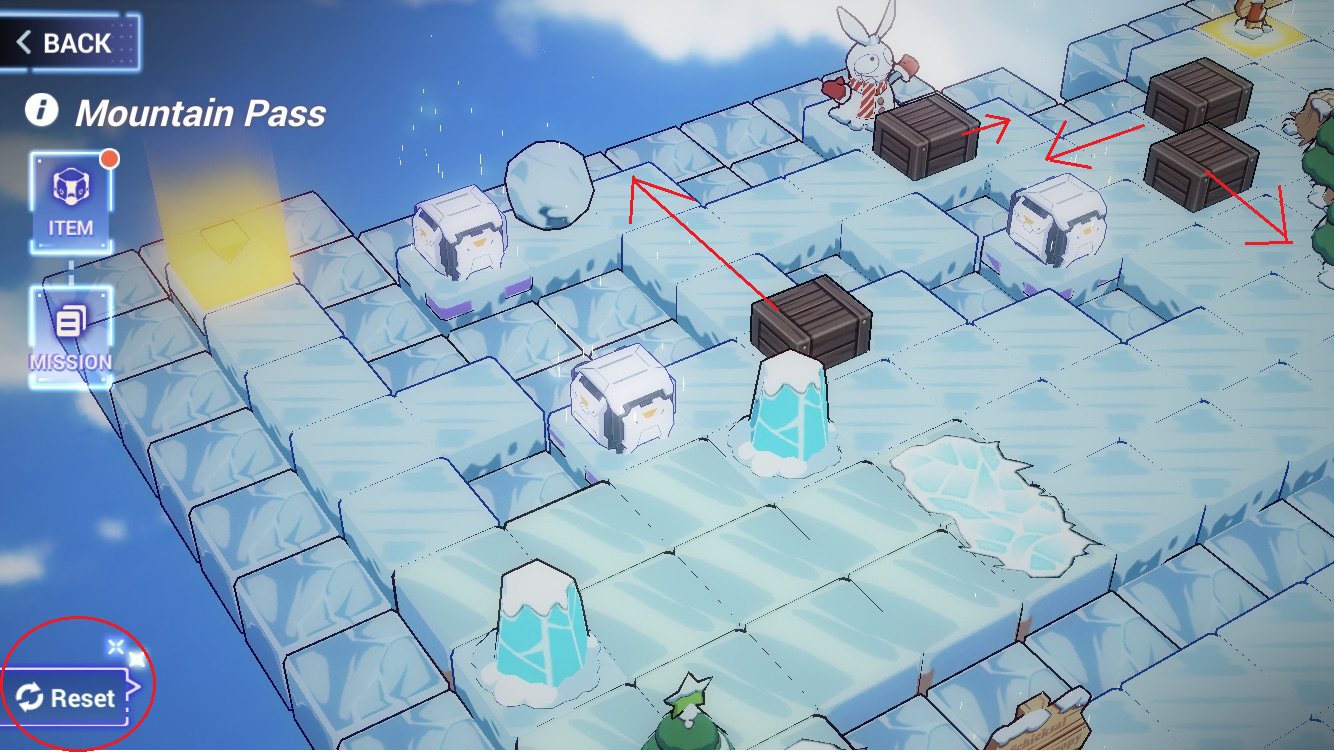 Move the boxes and fight the red snowman and get the hiking cane.

Return the Wolf of the Peak for the Boots. The ice tiles are now cleared and you can collect the crates on the map and move on.

Slide to the Southeast corner to get Ice Breaker that will let you break snowballs and collect more crates. You will need to reset the map if a box is blocking a crate. Once you collected everything, you can move on to the next map.

Talk to the Red Boss icon which will be Lili and Roza. Avoid fighting for now. Talk to the sign then talk to Blood Rose (Lady of Fyre).

Next, fight Tesla and click on the yellow tile stone. Talking to Tesla after the fight will make her leave. 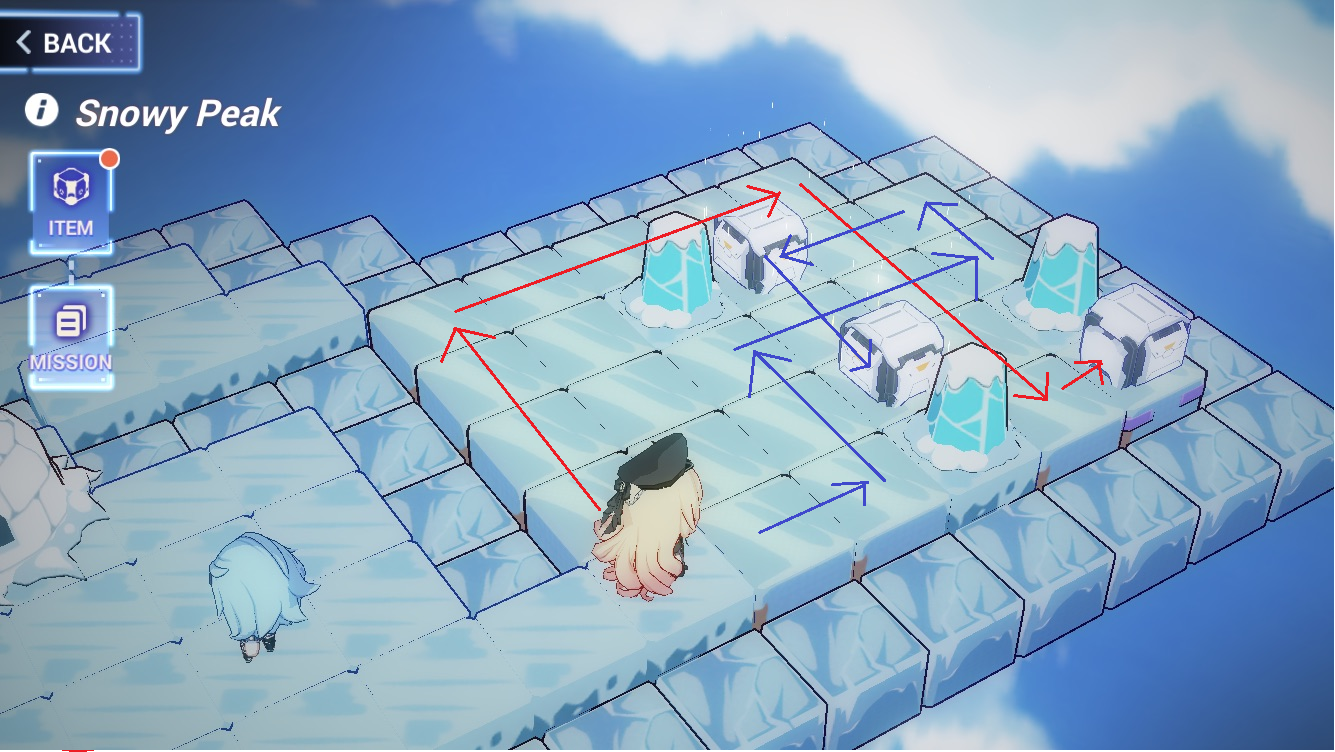 The next part is an ice puzzle. Follow the directions to solve it. Talk to Lady of Fyre and return to Lili and Roza. They are Asseka but it will be an easy fight with the quest item. Once they are defeated, you have completed Snowy Peak. Now we will head to Fogwood. 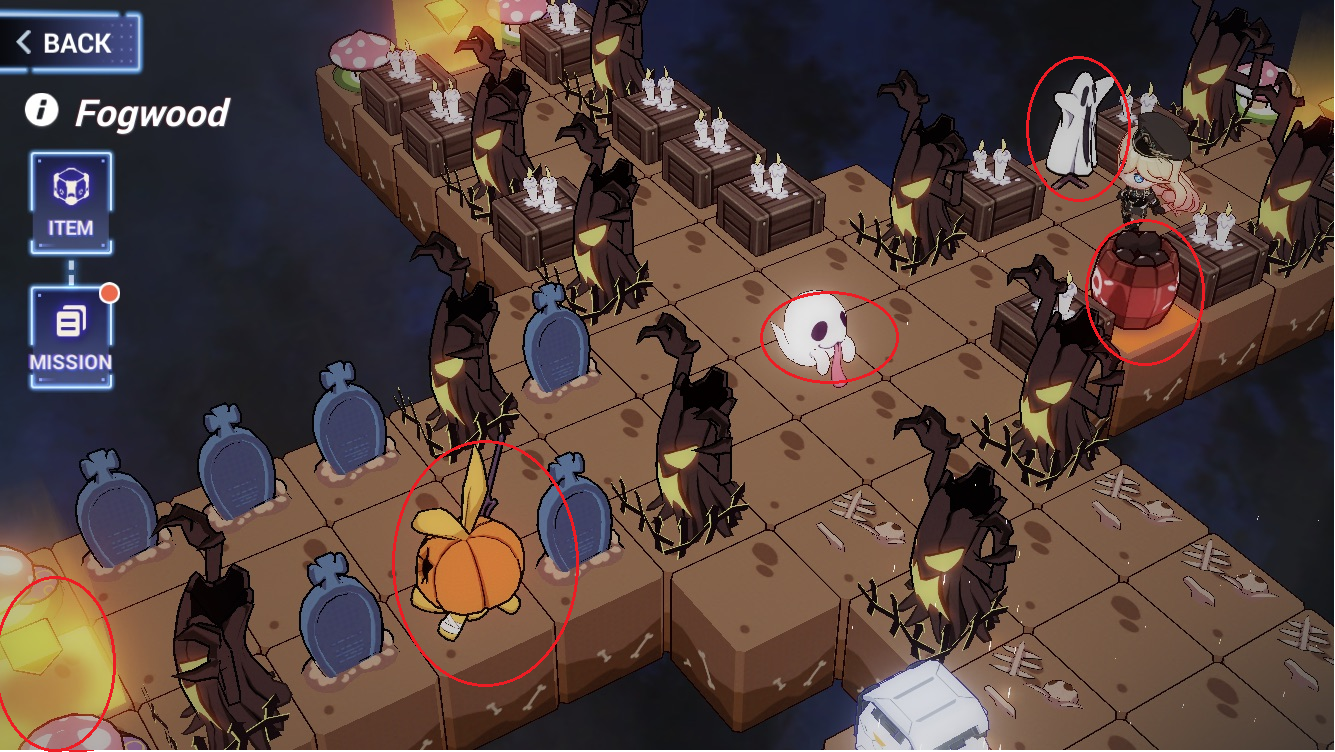 As the name suggests, it is foggy so you will have to walk and explore each tile. I'll highlight the tiles of note on the map. Try to click on all the pumpkins, red bombs, ghosts, and crates before moving on.

The doll for the pumpkin on the left is found from battling a crate on the Southeast.

There is a portal on each side of the map. The only portal that works is the one to the West. 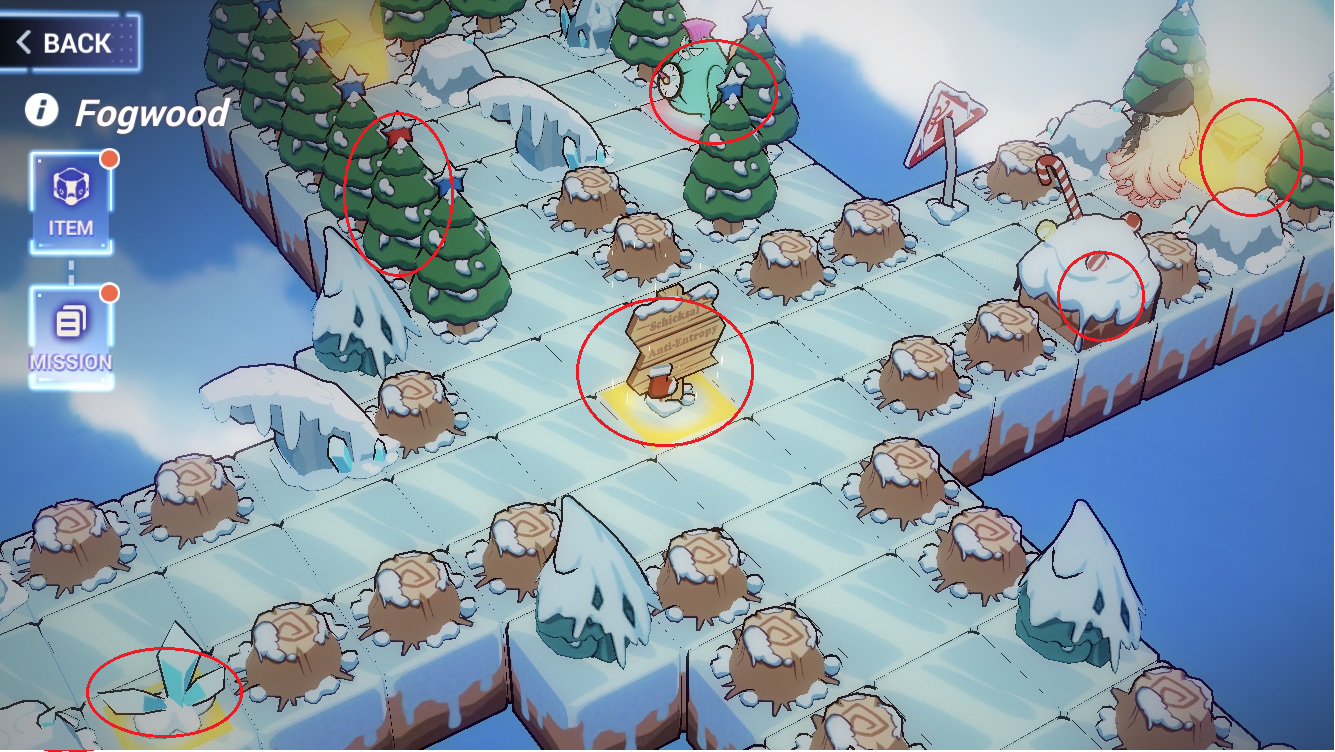 Floor 2 is much like Floor 1. I circled the tiles of note. The snow pile to the right needs a cake. The cake is a box found in the Northeast, after the monster. The ice shards to the West also leads to a monster to the South. Defeating it will be part of the statues' side-quest from Creaksmouth Plaza. Once you collected all the crates on the map, exit with the portal to the East.

Heart of the Woods 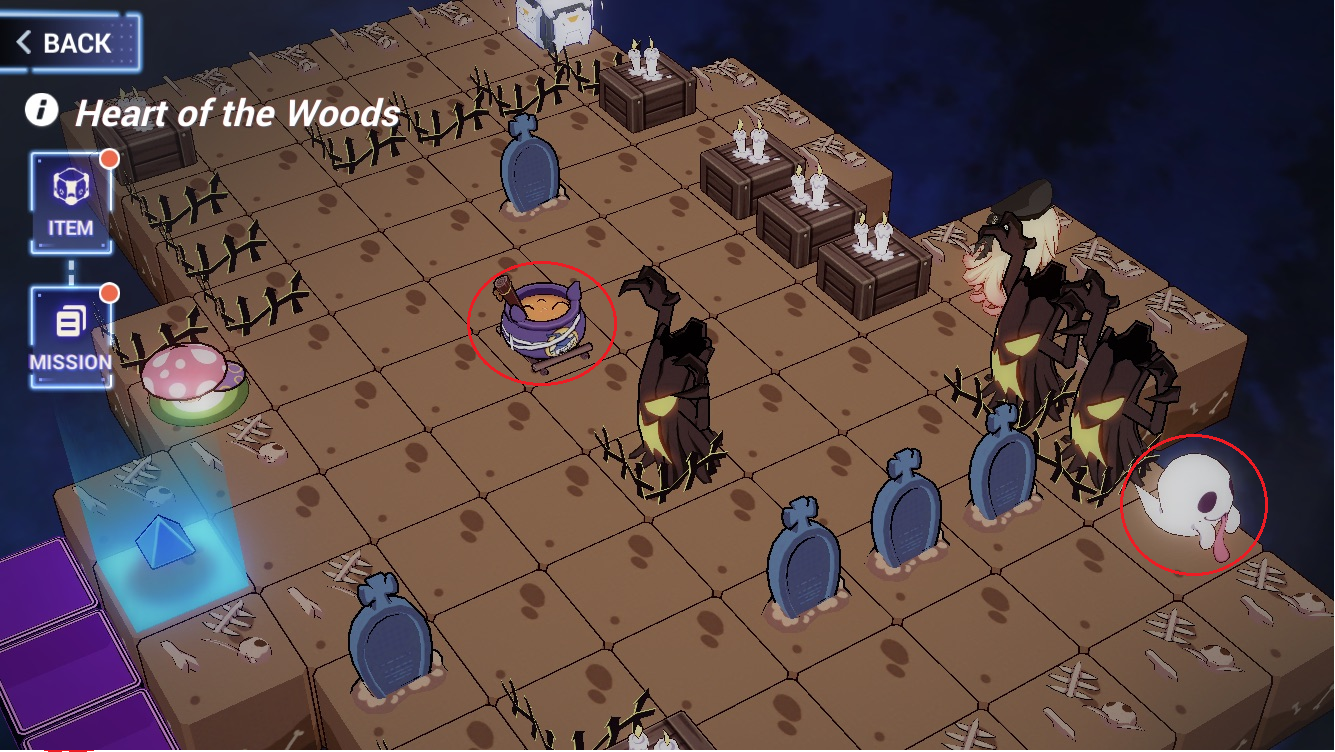 Once again you will have to explore to see the map. However, it's a very small and simple map. Talk to the cauldron then the ghost. Afterwards, Benare will appear. Defeat her and walk behind her spot to exit the map. There is also a crate to the North. Now we can return to Creeksmouth Plaza. 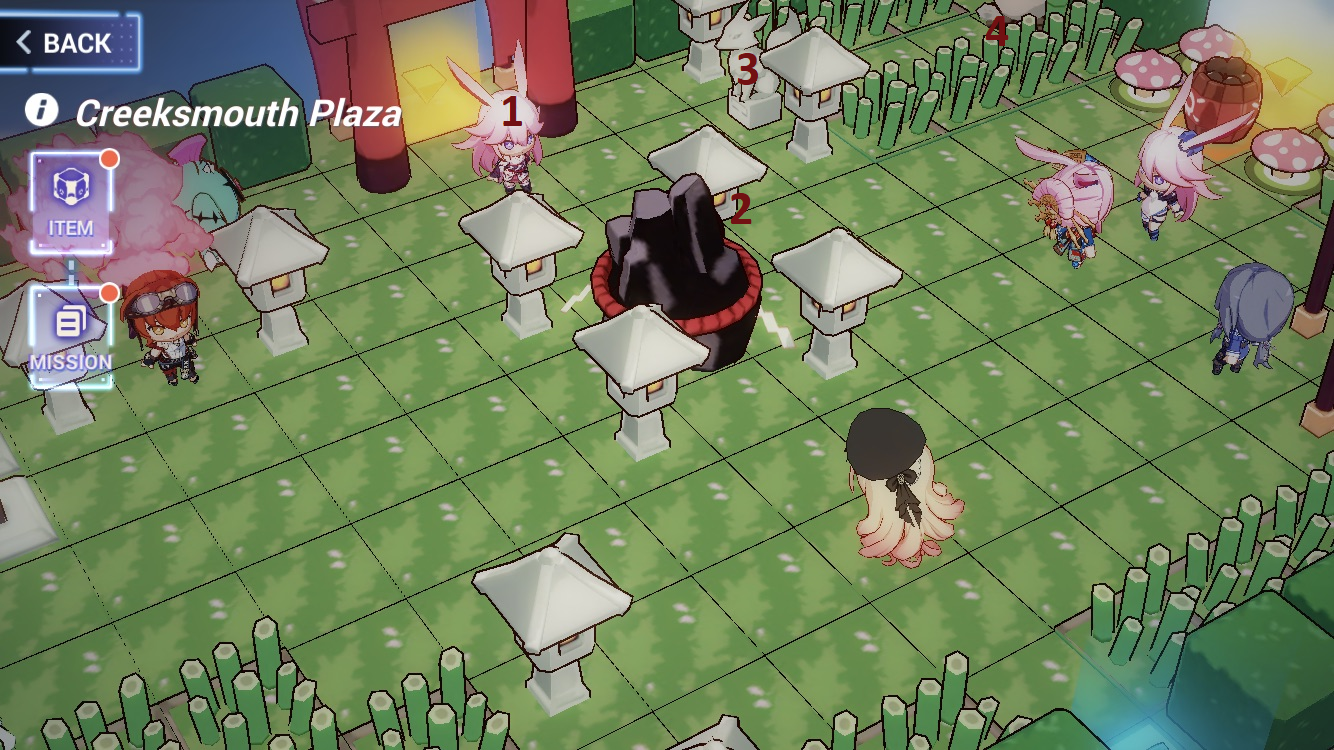 Talk with Alder Sakura, followed by the black stone in the middle. Afterwards, Sirin Voidkopf will spawn. Talking to Sirin will start the battle. After the battle, speaking to Sirin will start a second battle. Finally, we can also complete the side quest. Talk to the fox statue, then the water fountain, and lastly, the Southwest statue. Exit through the North once you have completed everything.