Hello Captains! This is a walkthrough for Chapter 3 of the Empyrean Legends Event! This event's release date is 02-19-2020 10:00. There will be videos to watch of my playthrough and explanations if necessary.

Before you get started...

Keep in mind that you should do the 3 Daily Trials before you head out to the main levels because having bonuses are extremely important. 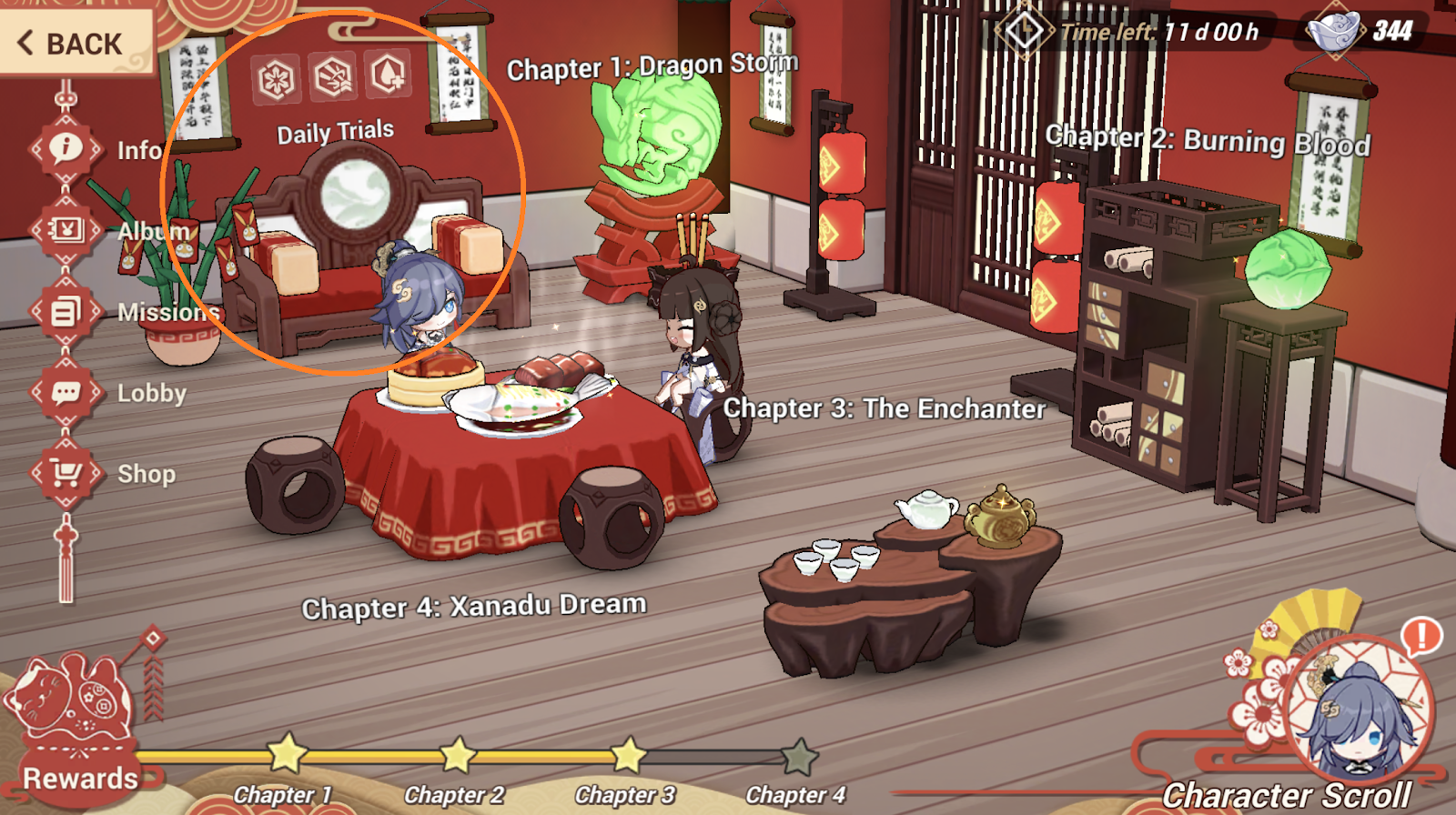 I tend to get the following:

You always want to have more damage power. The more damage means the enemies die sooner and will not be able to hurt you as much. The priority is for the above 3 bonuses are from top to bottom, with top being the best. But you do want to have at least 1 bonus to slow enemies. Slowing enemies is a great way to maintain distance.

With a small dose of:

It's good to keep some form of balance in your bonus kit. With HP drop rate and/or Enemy kill for hp recovery, you can keep going in tight spots without spending too many retries. Evasion cooldown is good when you need to maintain your distance, a good but not mandatory bonus.

Other considerable side options:

I find the other unmentioned bonuses to be too situational or not as impactful.

And lastly, remember that the Local Chronicles you use to sweep an EX stage is also needed for consumption to enter an EX-stage. You can obtain 1 from logging in, and 2 more for completing the first of the 3 Daily Trials.Sweeping an EX stage does give you a bit more bonuses when you start out and more importantly gives you Essence Stones to upgrade your valkyries. Upgrading your valkyries increases their HP, ATK, and eventually unlocks more abilities. Stage 1 will be to protect Liliya from the incoming onslaught. It's pretty straightforward. Try to cycle between your valkyries so you can use as many bombs as often as possible onto as many enemies at the same time. Soon after a few waves of enemies, Liliya will retreat and two Flame Furies will spawn to be defeated.

If you want a little more asterite, the 4 Urns be smashed by the Flame Furies.

Side Objective: Destroy 4 odd Urns in the stage. 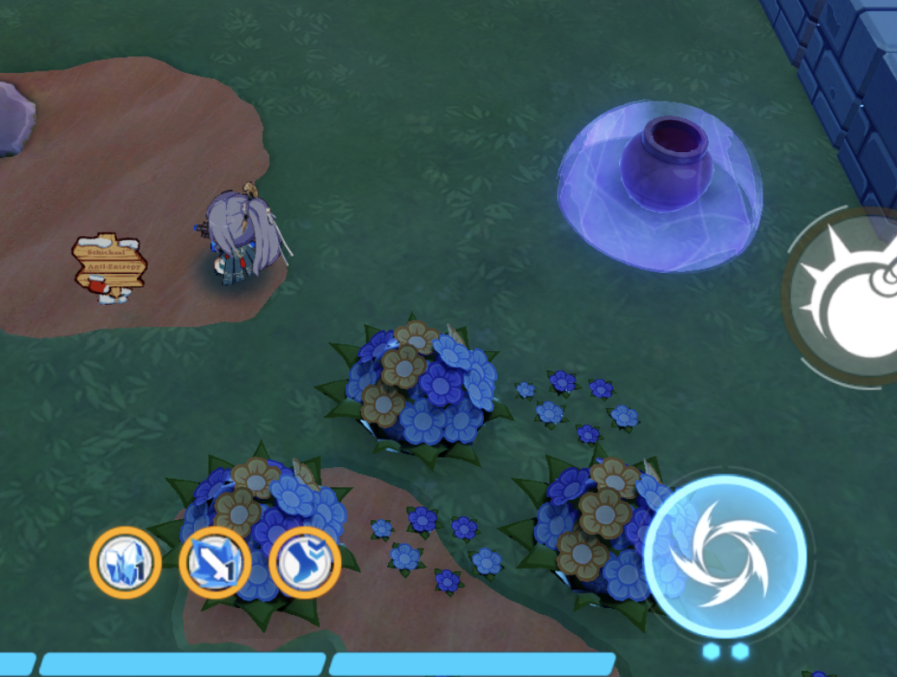 These Urns can only be smashed by the Flame Furies' Ground pound attacks. In order for this to happen, stand next to a Urn, wait for them to target you and the Urn (indicated by the red circle), then dodge away. Repeat it 3 more times to clear the objective.

Upon defeating this stage, you unlock Himeko. Himeko is one of the best valkyries you can have access to. She uses a laser that has a very long range of piercing damage and a bomb that has an AOE gravity field. This bomb is an amazing source of crowd control; it attracts many enemies into one area for potential aoe dmg and it keeps them there briefly as well.

At this point, I had a team consisting of:

Fu Hua for the standard bullet dps and fire bomb,

Theresa for a slightly tankier and strong close combat shotgun dps, and lastly

Himeko for another strong DPS that can take care of enemies reliably from afar and also utilize amazing crowd control.

Stage 2's main objective is to stop the giant from reaching to where you spawned. You want to use the launch pads to reach him asap. Try to get the chest bonus(es) along the way. Use your bombs and the field's bombs to damage and keep him at bay for as much as possible. Don't waste time reloading. Just switch to your next valkyrie to make the most of your time.

Side objective: Pray to (interact with) 4 Homu statues in the stage.

This stage has a maze format. These urns are breakable. Shoot/bomb them to proceed to other areas. (Lasers do not pierce through urns.) You want to destroy all the urns with a purple light. Until all specified urns are broken, mobs will continuously spawn. So break the 4 urns first and then kill all remaining mobs to win.

Stage 4 can be accomplished if you kill all the enemies or survive for 1.5 minutes. It is extremely recommended that you use Himeko's bombs to crowd control the enemies.Try to avoid staying at the center of the map and always keep moving around to avoid being surrounded.

Side objective: Kill 100 enemies before the timer runs out.

To proceed to the next stage, you must clear all 20 floors of the EX stage. EX stages remember your progress so as long as you beat floors 5, 10, 15, and 19. Because you cannot sweep until you participate in the stage first, I recommend beating up the first 5 floors. If you are lacking in HP, destroy the props for a chance of an HP pack drop.

You will notice that in some floors, such as floor 2, that when you proceed to an empty area, you will be greeted with a sudden spawning of many enemies. To easily counter this, spawn them and retreat. Then use Himeko to gather them so you can easily kill them in one go.

For floor 3, dash as much as possible while rotating between valkyries to traverse the fireball route.

After sweeping, I leveled up Himeko to the highest she can be. I then raised Theresa and Fu Hua to 41 so they can unlock their 3rd abilities. And lastly, I raised Fu Hua's level to as high as I can with my limited resources. With that, my team would be ready for an uninterrupted clearing from floor 6 straight to floor 20.

Having Himeko maintain a very long distance from enemies to avoid damage is an ideal strategy because you keep yourself as healthy as possible.

In the snowball floors, focus on dash-rotate-dash to evade the snowball. Enemy mobs can be focused on later when the imminent threats pass. In such stages, the exit will not spawn until all enemies have been destroyed.

Floor 20 will feature Ai-Chan. Just stay very far away from her and you will be able to read her moves easily.

The final bosses of Chapter 3 are the Maotai Girls. Often it will be Rozaliya that is out. The flurry of attacks they produce makes the stage essentially become a bullet hell. Always try to stay by the walls and move in a clockwise fashion nonstop (unless attacks are blocking you). Crowd control won't do much here so just dodge and damage.

Side objective: Take no hits. For this one I recommend waiting until you finish Chapter 4 and come back, because Rita is even more OP