Hey captains. I'm Marisa Honkai F2P, this is Honkai v4.6 Overview (SEA server). This patch is the beginning of a new season, so a lot of new content is jam-packed here. New Herrscher, new Divine Key, free Herrscher of the Void, farmable Celestial Hymn!! Can you believe that? This is going to be a long read. Let's go! 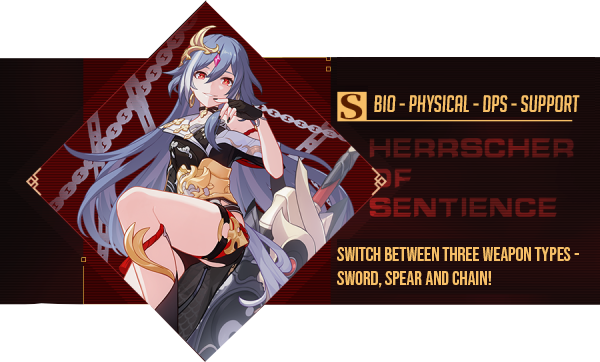 [Herrscher of Sentience] is a powerful fighter and supporter. At 100 SP, hold [ULT] to cast Ultimate [A Worldful of Woes] that Impairs all enemies, enter Herrscher mode and BOOM! Bonk enemies to death! Say goodbye to your Night Squire and Celestial Hymn. 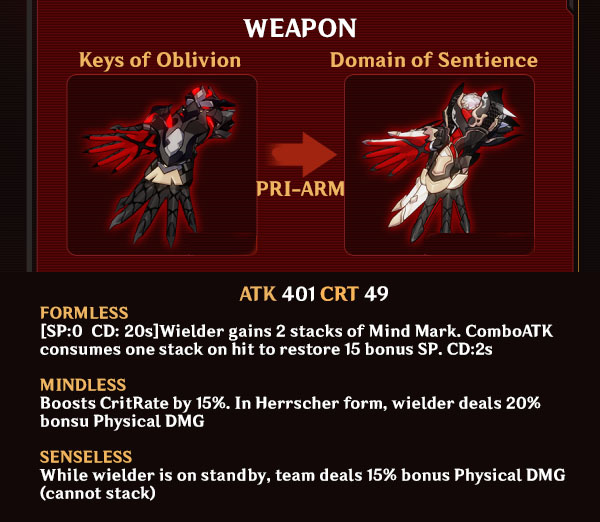 [Herrscher of Sentience] needs her signature weapon [Domain of Sentience] to function. It provides her with sufficient SP recovery, allowing you to go online fast. 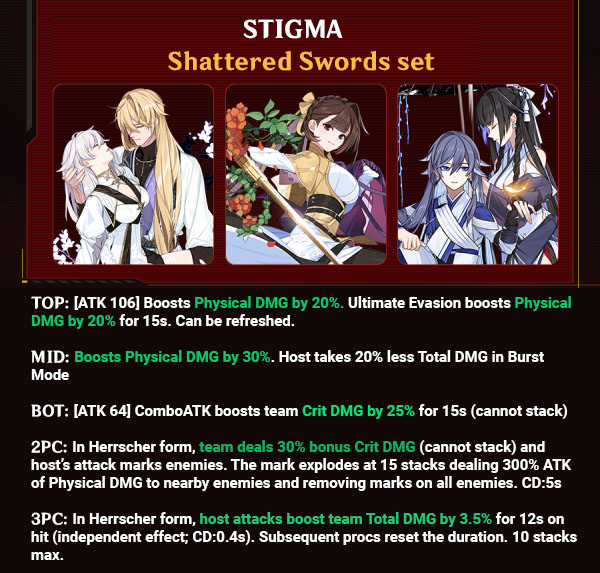 [Shattered Swords] is an excellent all-around set for Herrscher of Sentience. 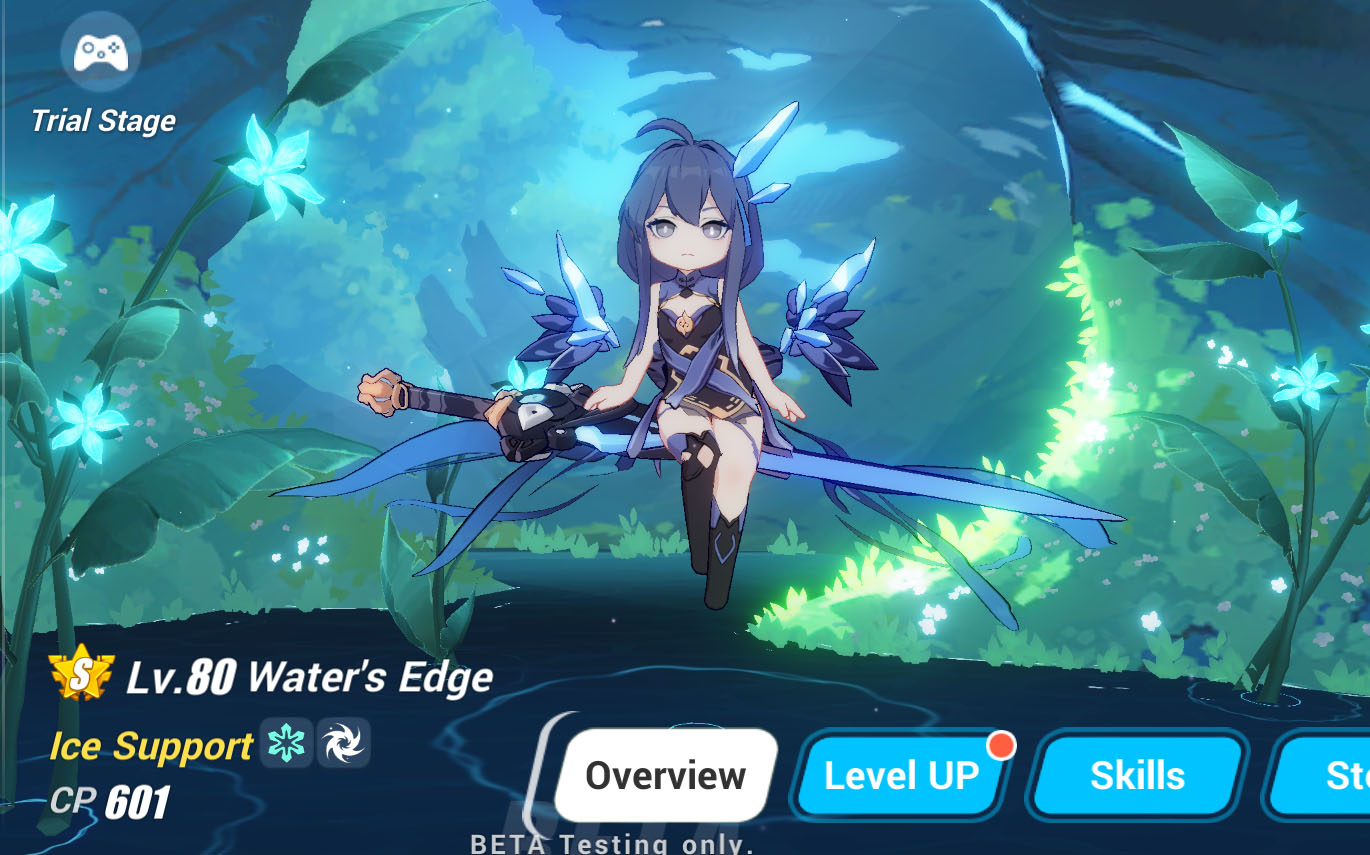 ELF [Water's Edge] is a gacha Ice support ELF who can pull enemies in a large area and make them take more Ice DMG with Ultimate. Genshin players might think this is Hydro-type Paimon. No. No. It’s actually based on a sword in Honkai lore with the same name. 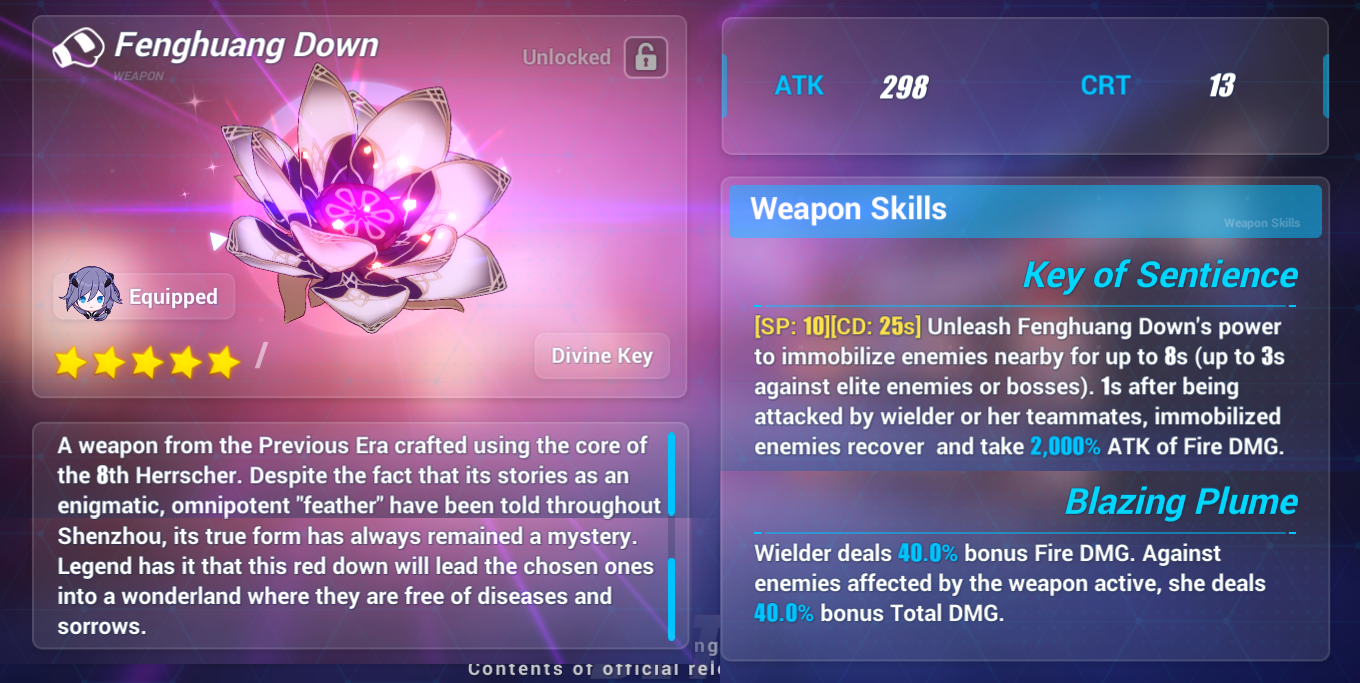 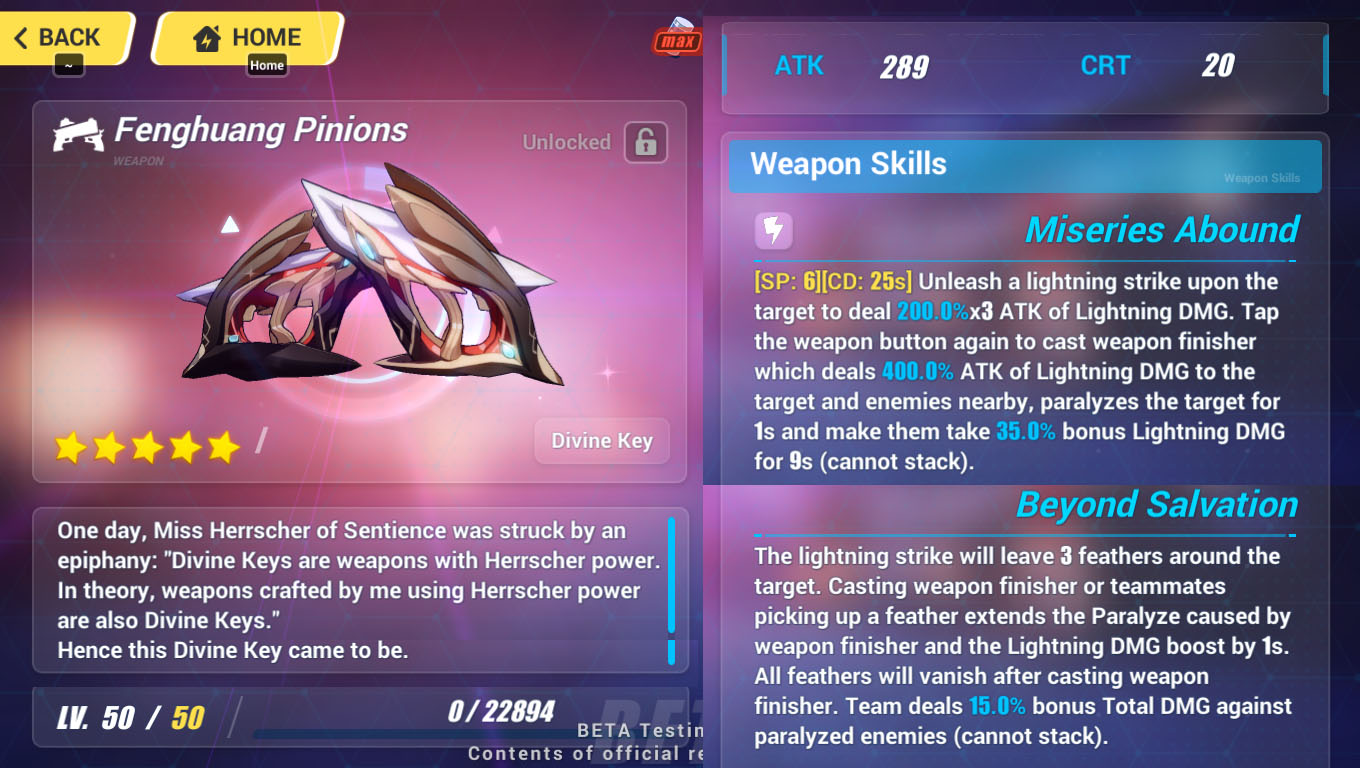 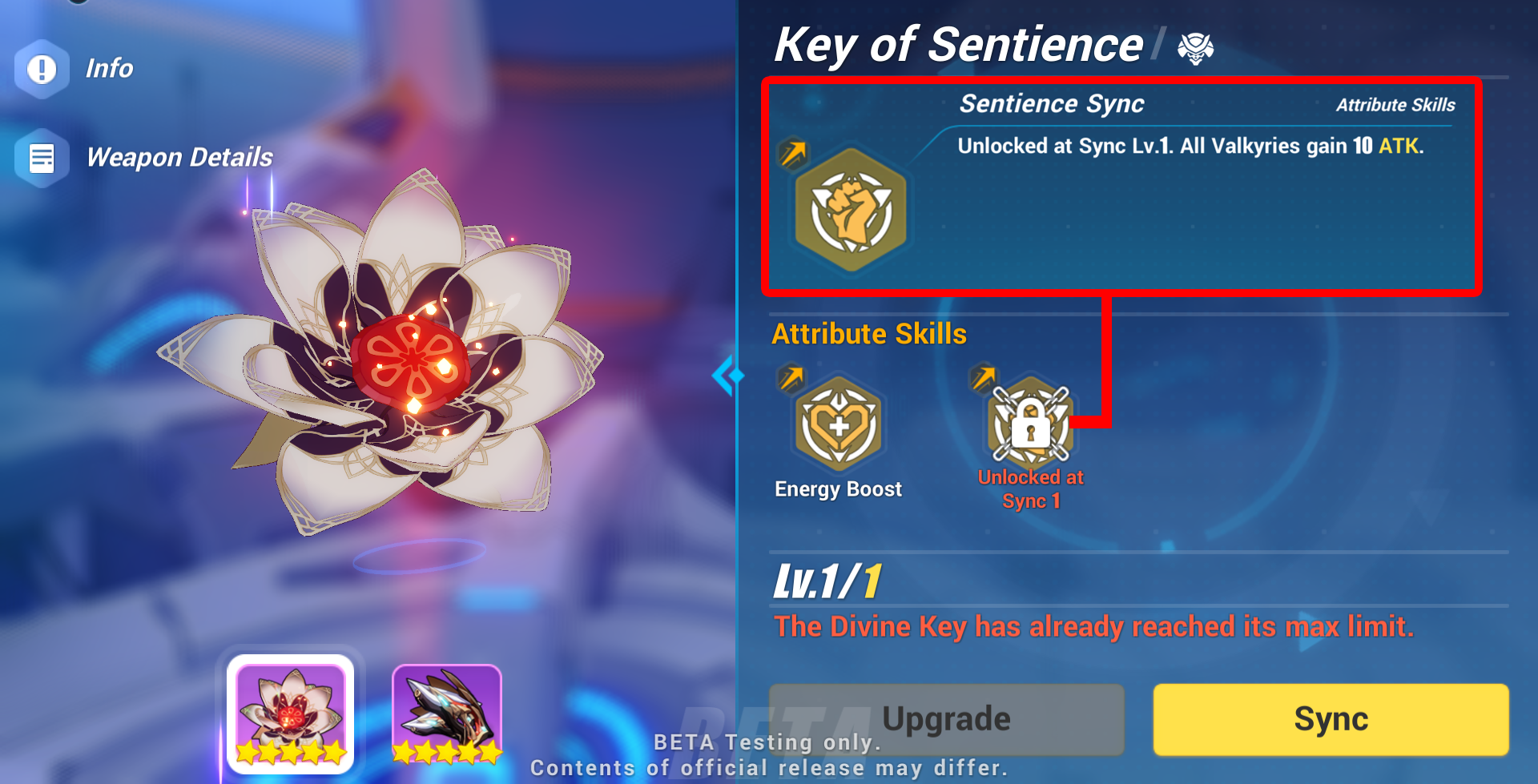 In Divine Concierge, Fenghuang Down can be synced in the [Key of Sentience] slot to give all valkyries permanent +10 ATK. 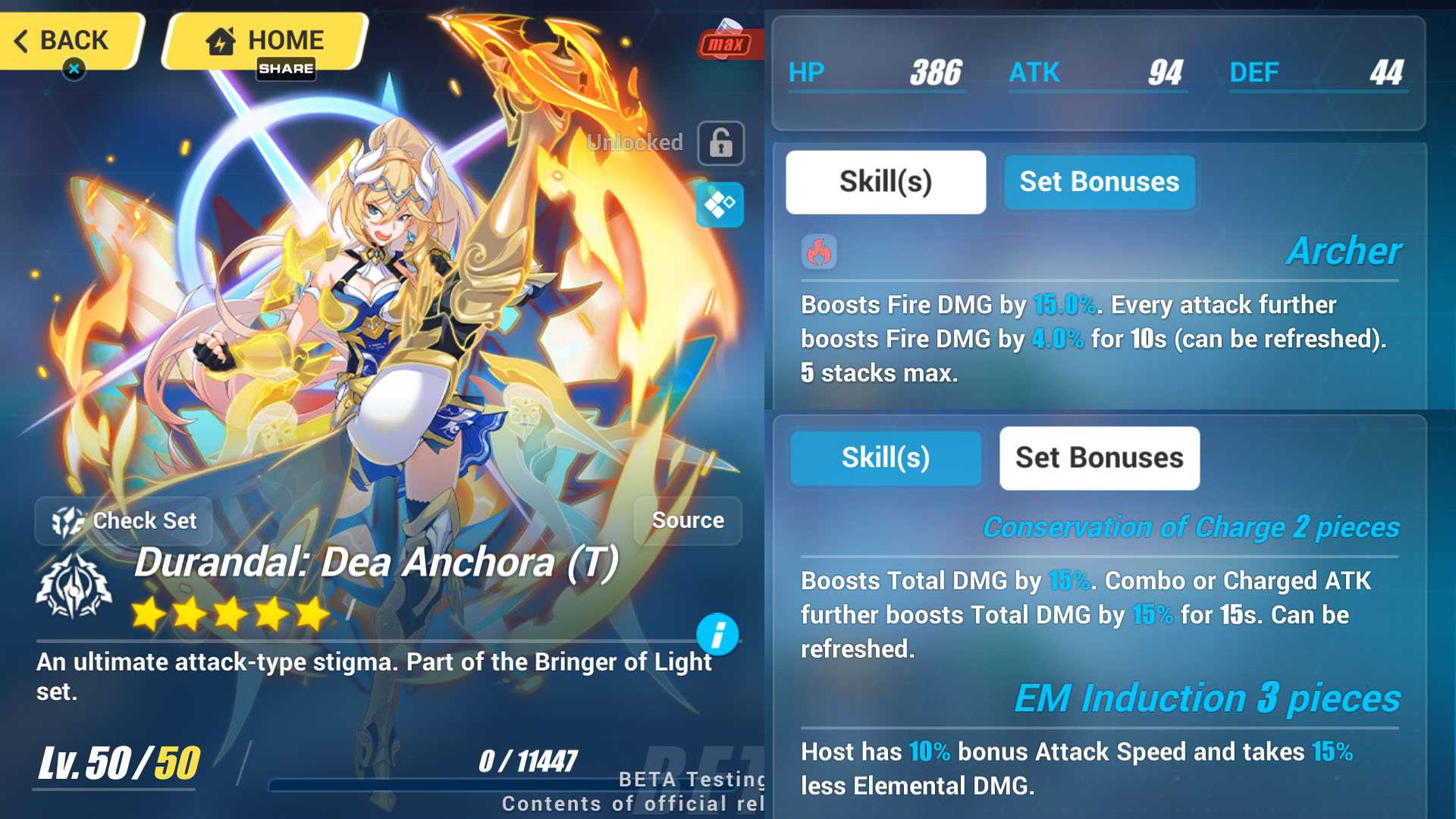 [Bringer of Light] set is the new special set, similar to the previous [Rebel's Blades]. The first piece - Durandal: Dea Anchora T, is a Fire DMG piece that can be acquired from the Spring event shop. Hmm…

[Columbus] set has a similar stat as Evangelion collab [Children] set. Columbus and Children set can be mixed and matched to activate its set effect. Example:

Columbus will be available in gacha supply. 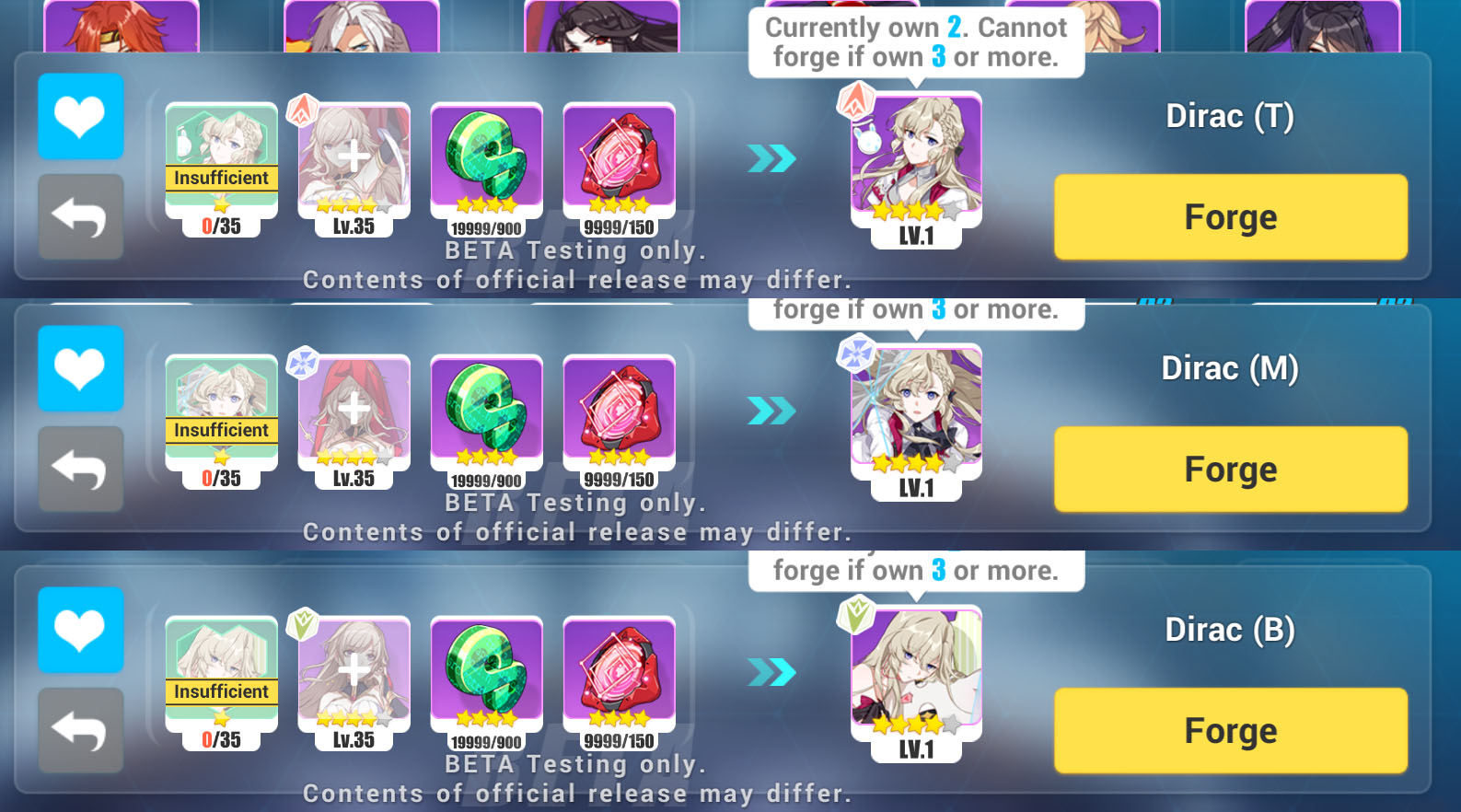 - It is a powerful stigma for any Burst Mode valkyries - Herrscher of Sentience, Swallowtail Phantasm, White Comet.
- Extra news from the dev: In the future, Ana and Dirac can be forged directly without Peary and Michelangelo.
- Bounty Silver event continues in 4.6. You can purchase Dirac ghost in Bounty Shop 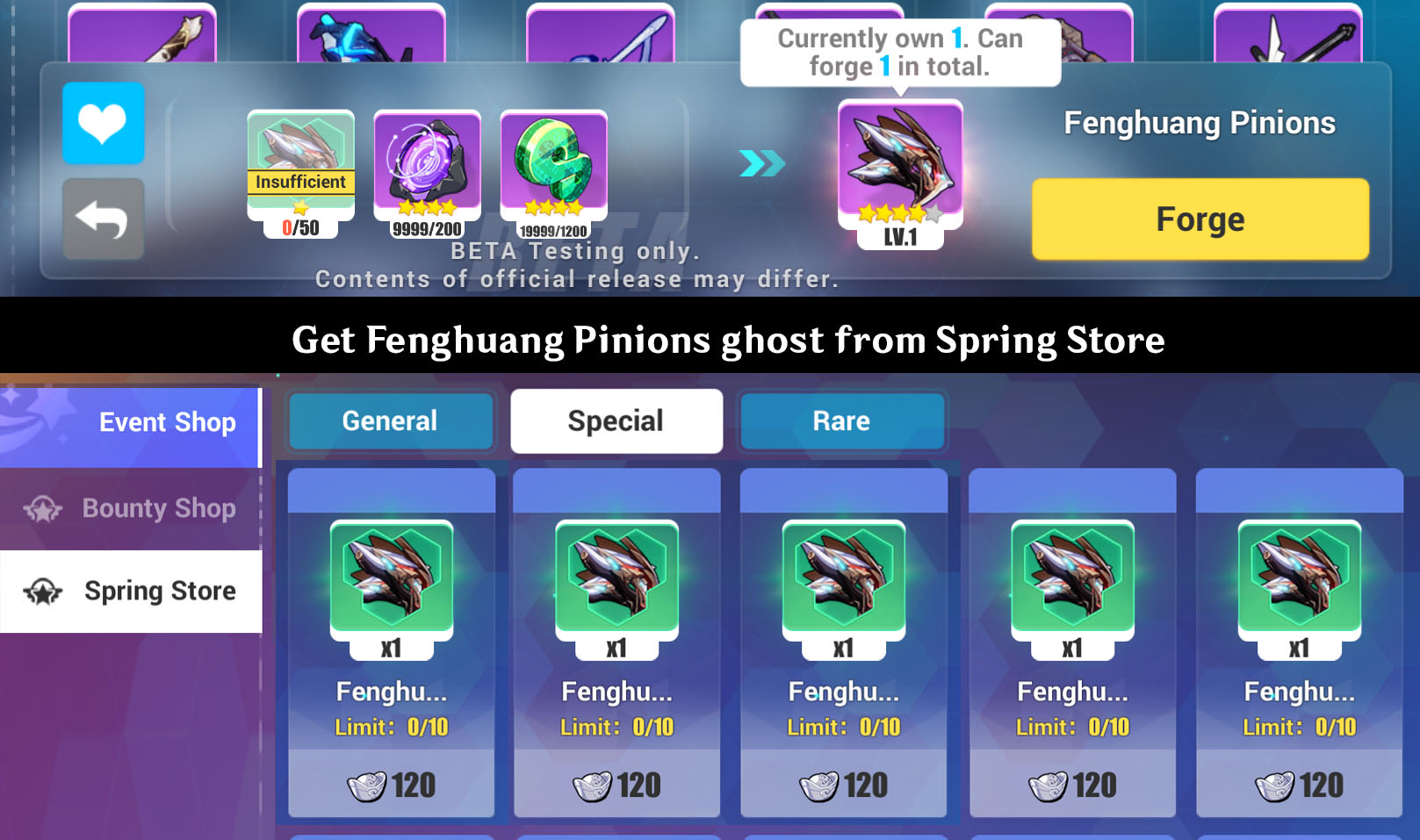 Starting from this patch, Theme Pass is no longer available. BP main rewards have been increased. 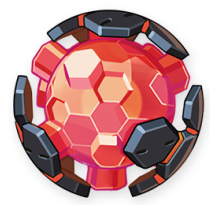 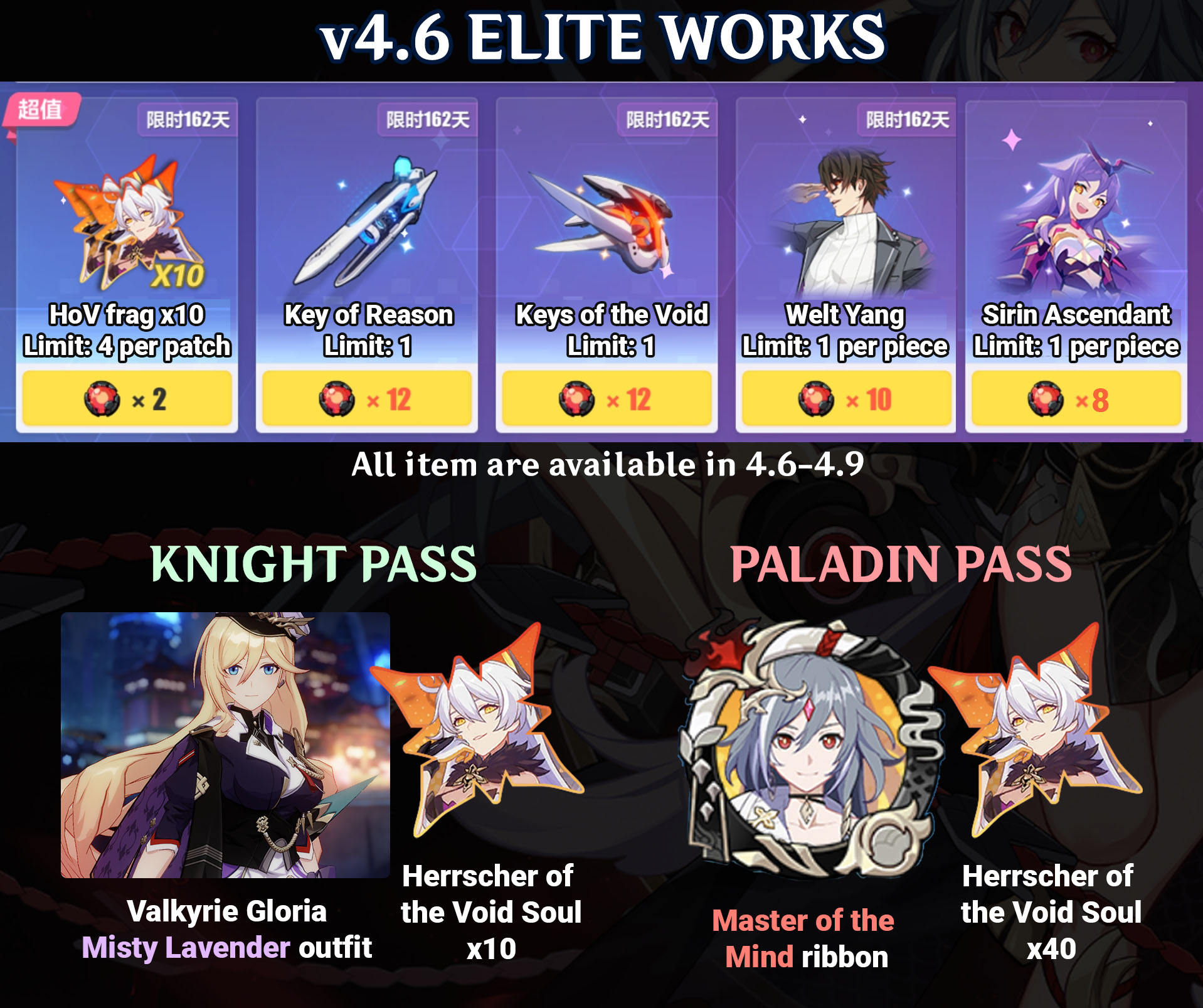 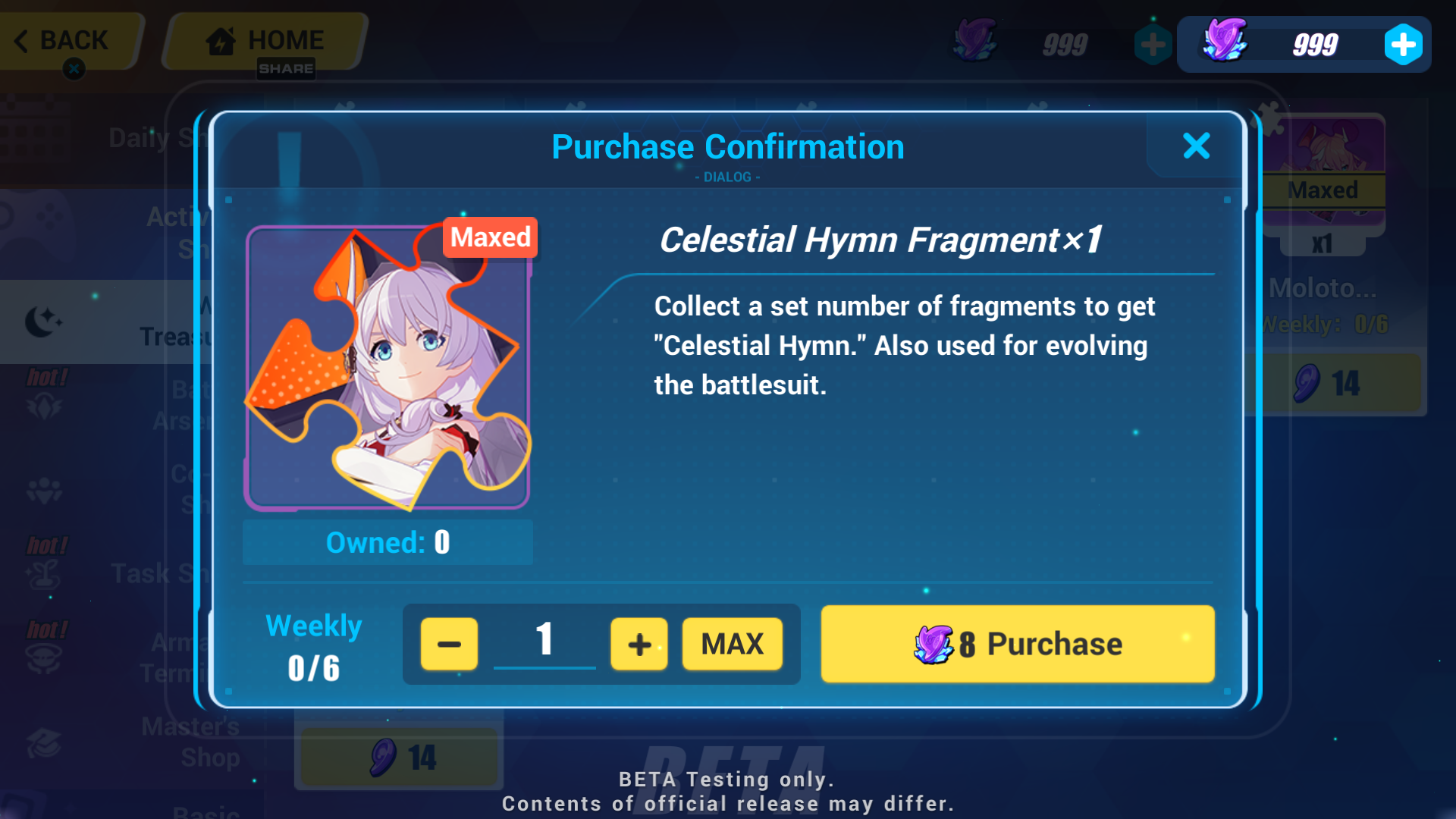 After three years, Celestial Hymn is finally farmable. It costs Ancient Legacy - you have nothing else to buy with it, so just get those weekly Celestial Hymn frags. 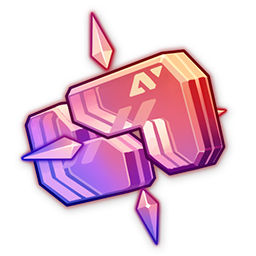 The new [SUPPLY SHOP] uses [Battlesuit Shard] currency that can be acquired from [Expansion Supply]. 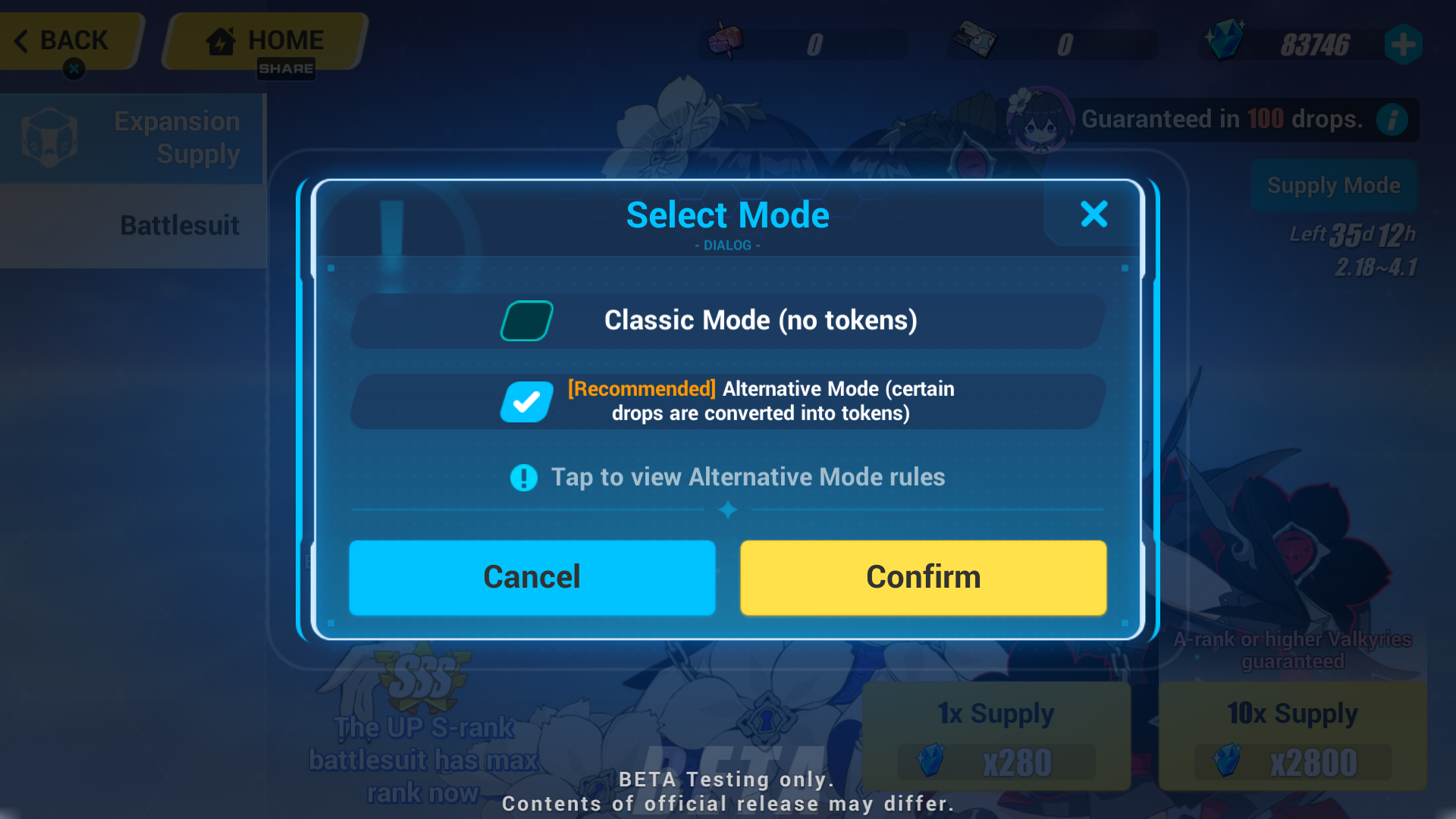 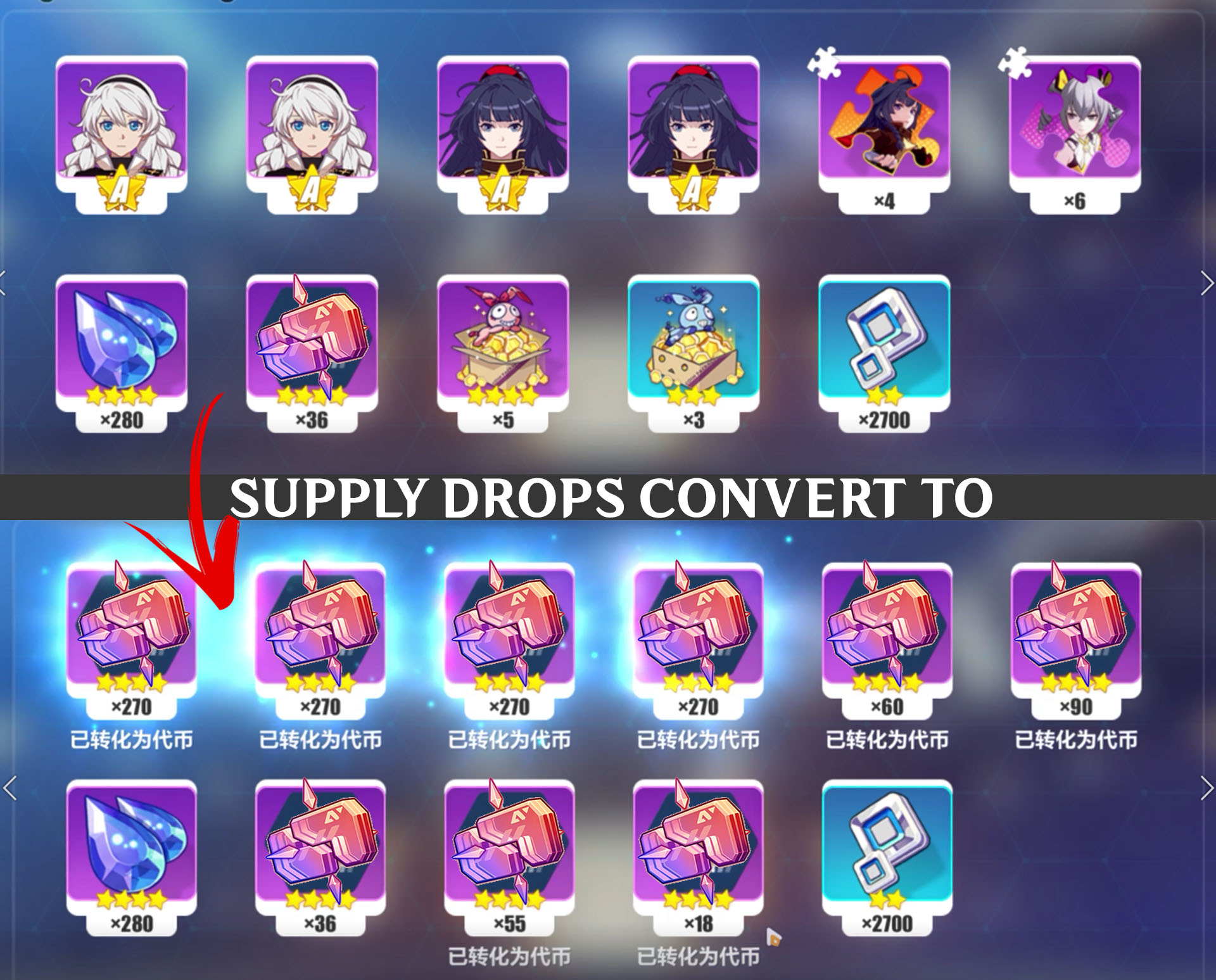 You can use [Battlesuit Shard] to purchase various item in [Supply Shop]. 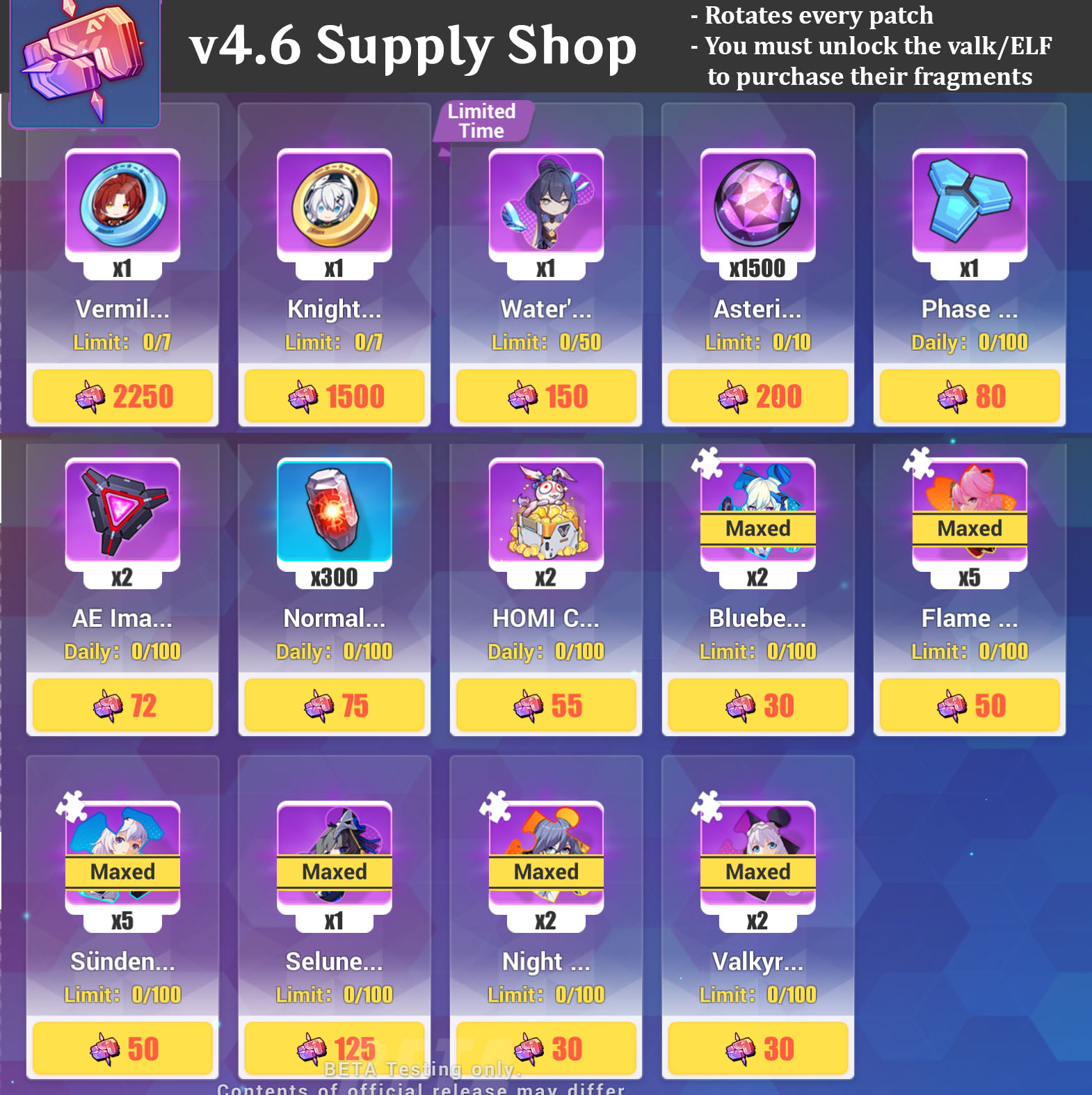 SPRING EVENT
ONCE UPON A TIME IN SHENZOU 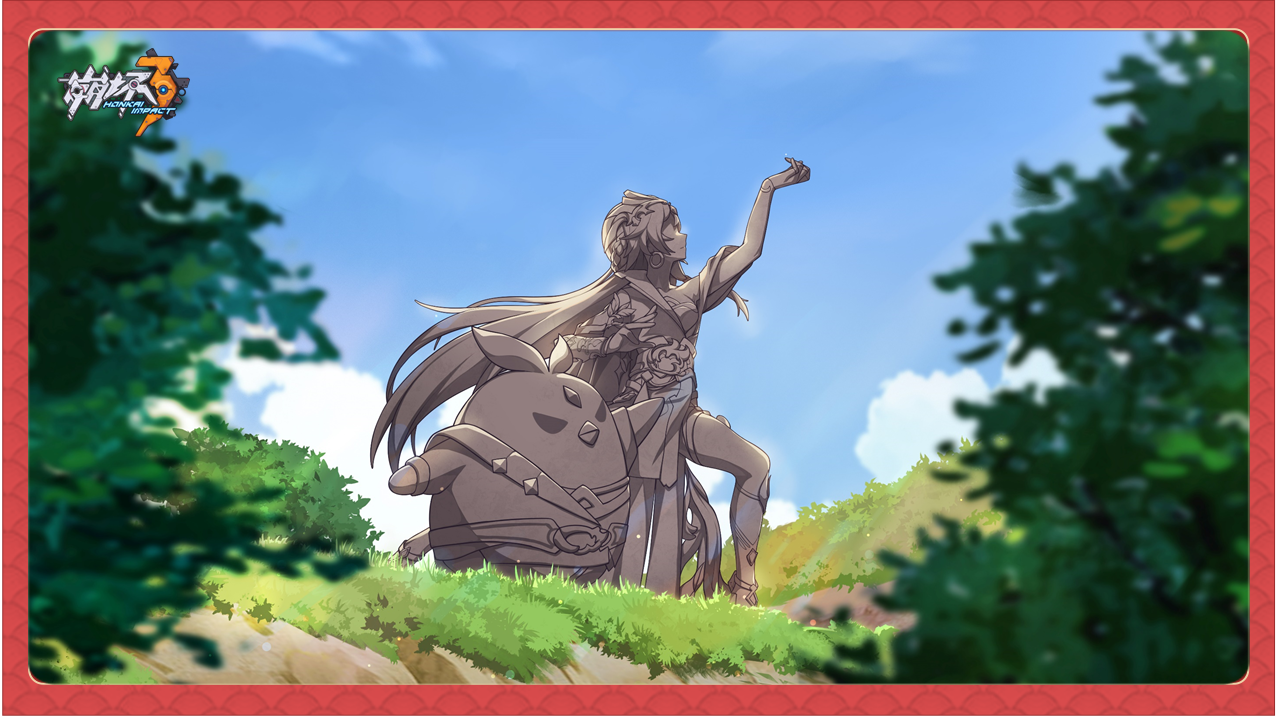 Legends say deep down the southern tropic lies an uncharted island that is the home to the mysterious Nian and the even more mysterious Phoenix the Celestial… St. Freya sets sail for a southern island to celebrate the coming of spring! 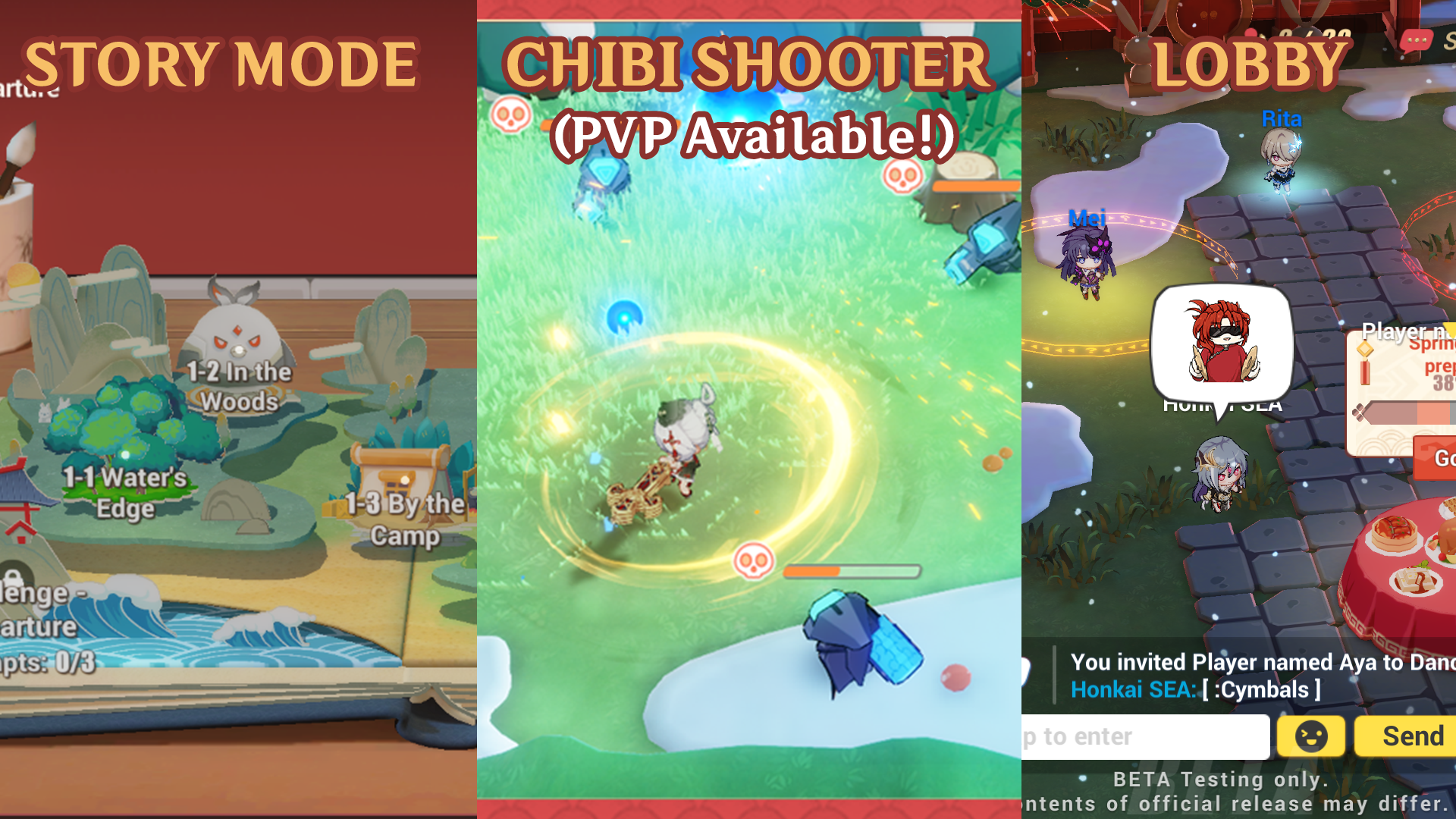 ◆EVENT REWARDS
Spend the currency earned from Spring Event in the Spring Store! Here are some of the event rewards! 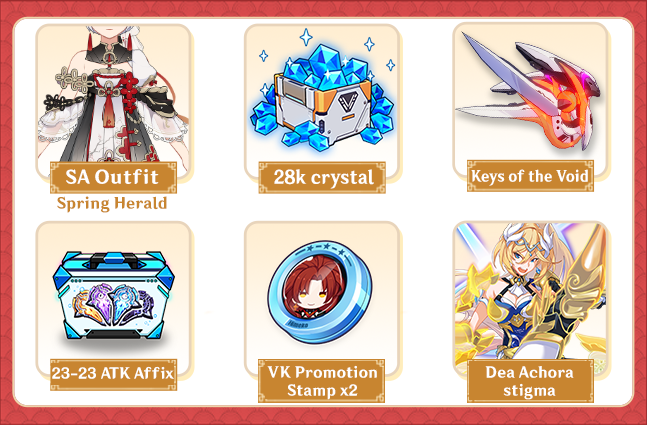 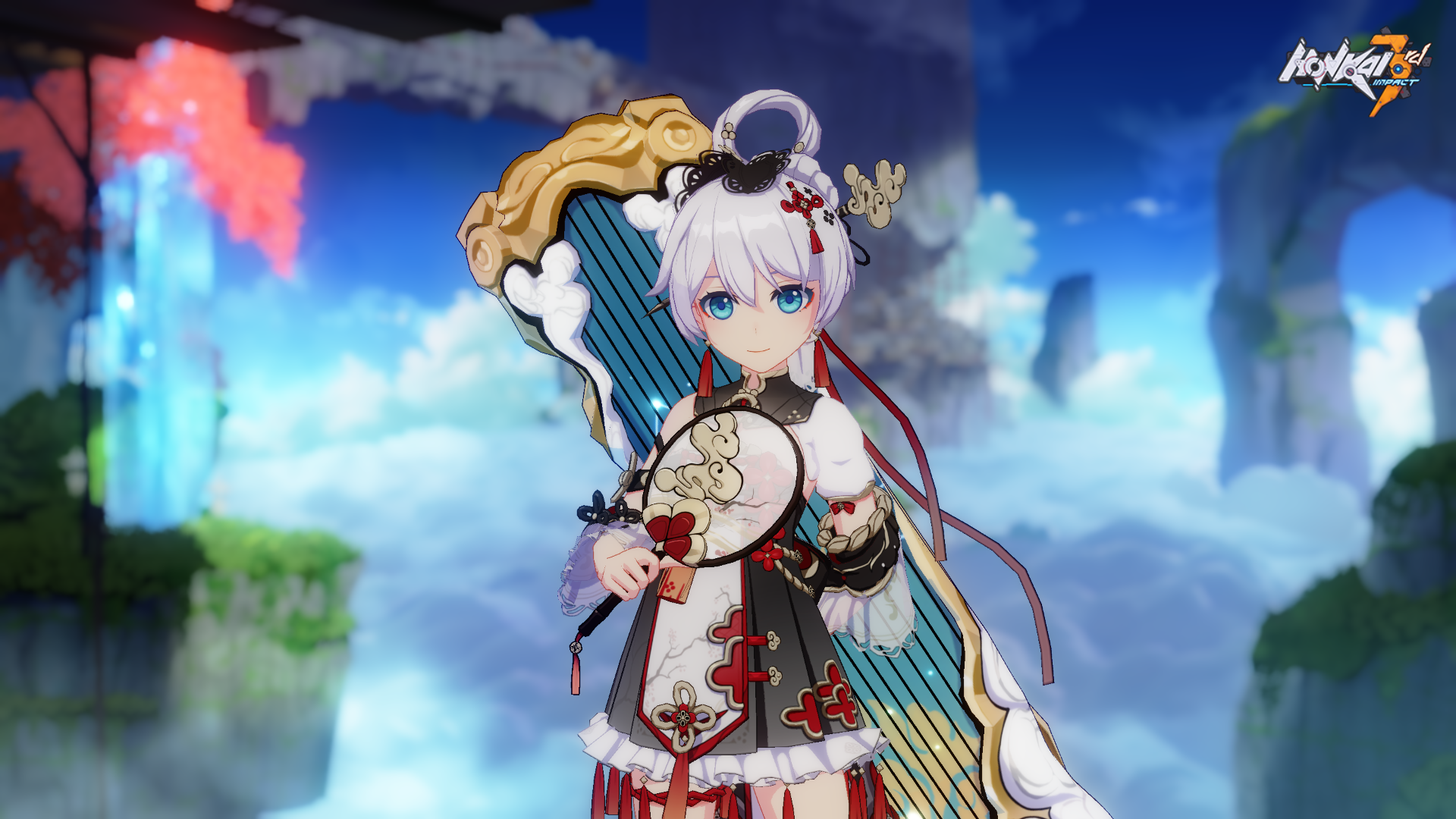 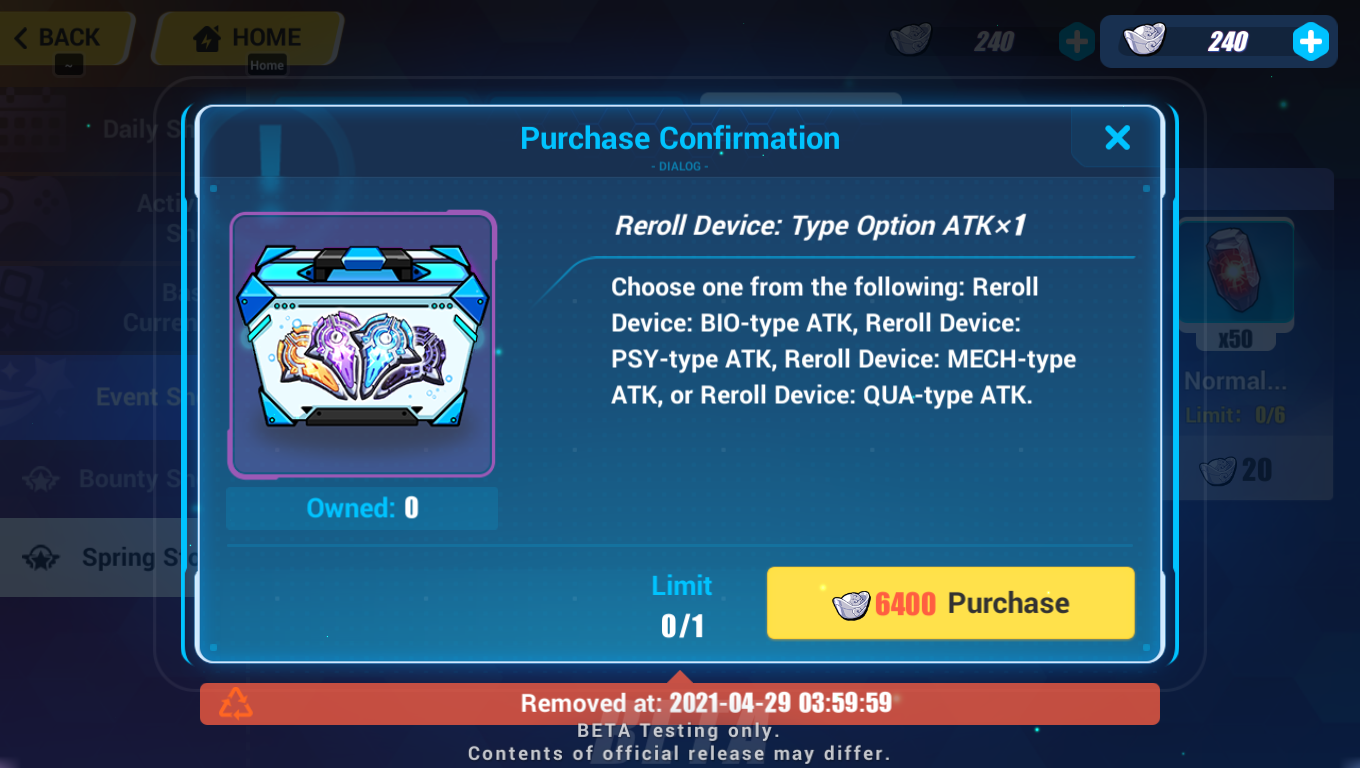 A brand new material: ATK reroll device that gives double 23 ATK affix on a stigma.
Choose the type that you want (MECH, BIO, PSY or QUA) 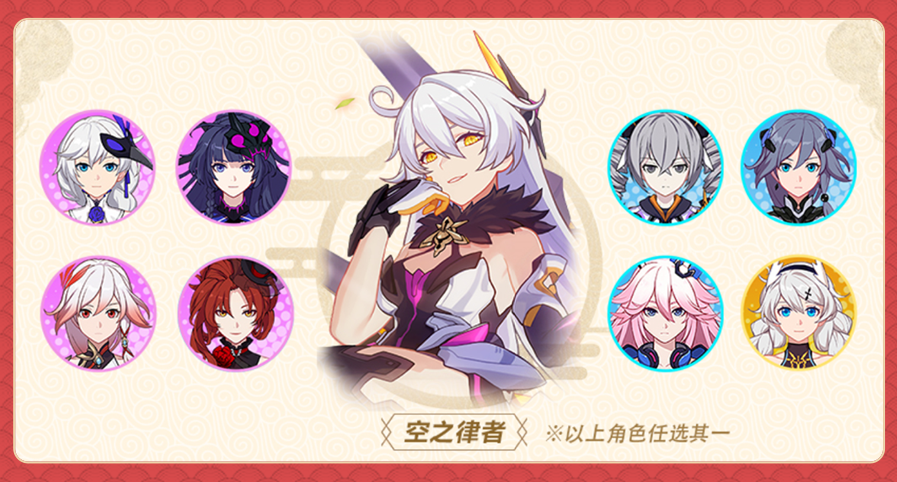 Participate in Spring Event to receive a free S-rank card. Choose one of the shown S-ranks in the image. I highly recommend you to get [Herrscher of the Void] since it is a gacha exclusive valkyrie! Plus, if you purchase her fragments from Battle Pass, she'll be SS-rank in a few patches, which is a pretty good rank for her.

BRIDGE THEME
Customizable bridges are here. Change the look and background music of Hyperion with these awesome bridge themes!

[Taixuan Step] can be obtained by doing Spring event missions 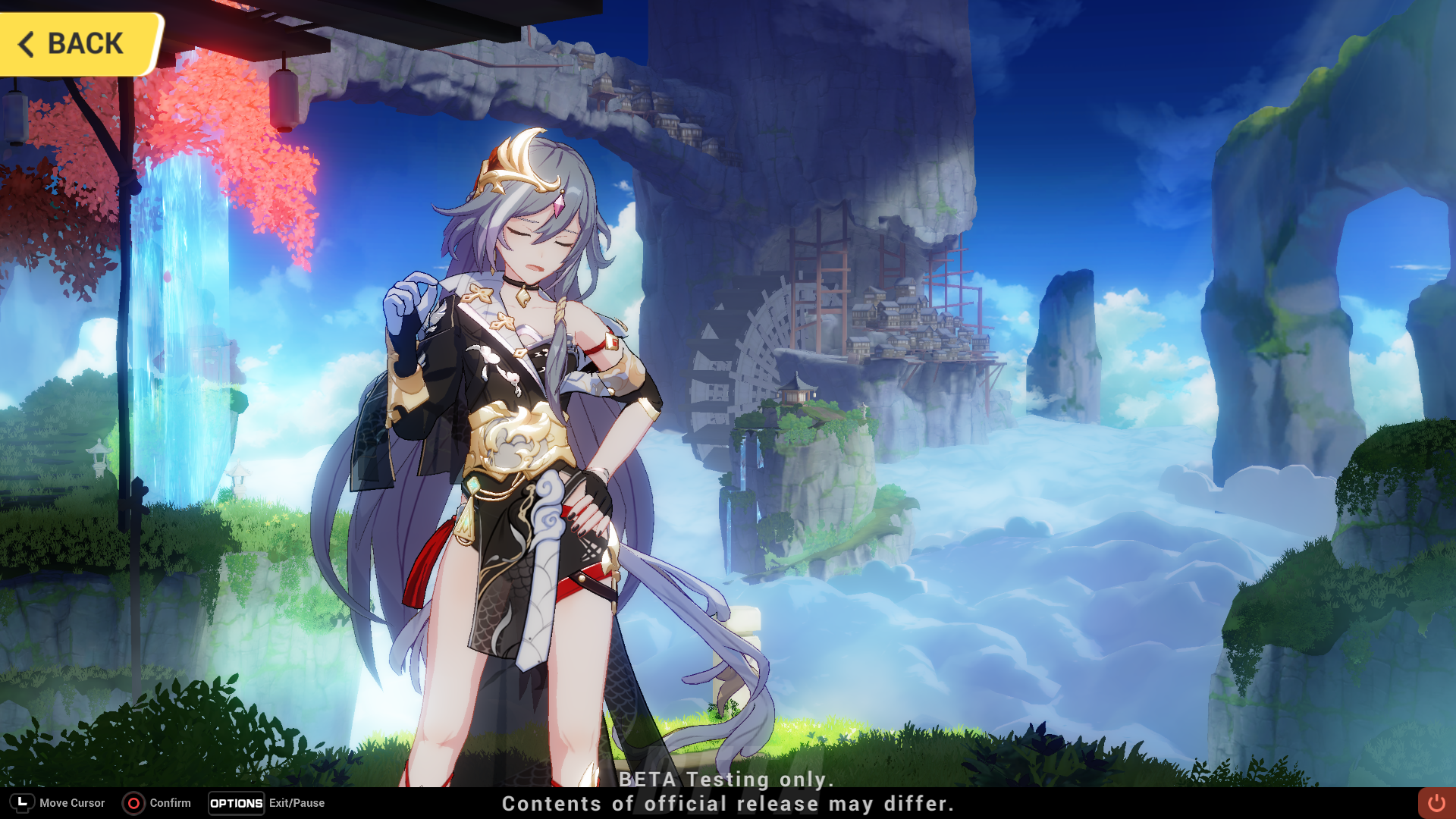 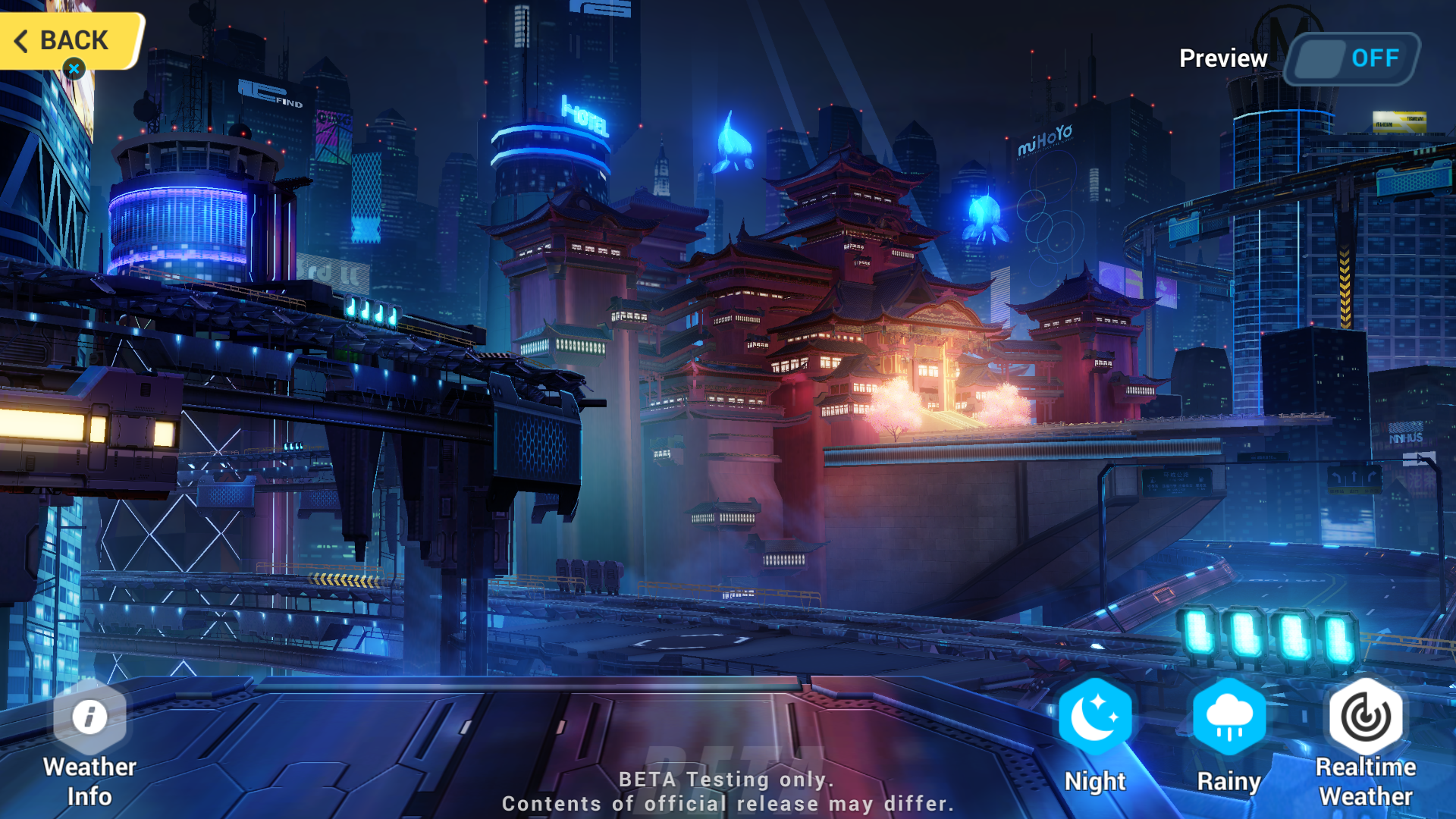 These battlesuits are added to Dorm Squad, and are available in Dorm Supply. 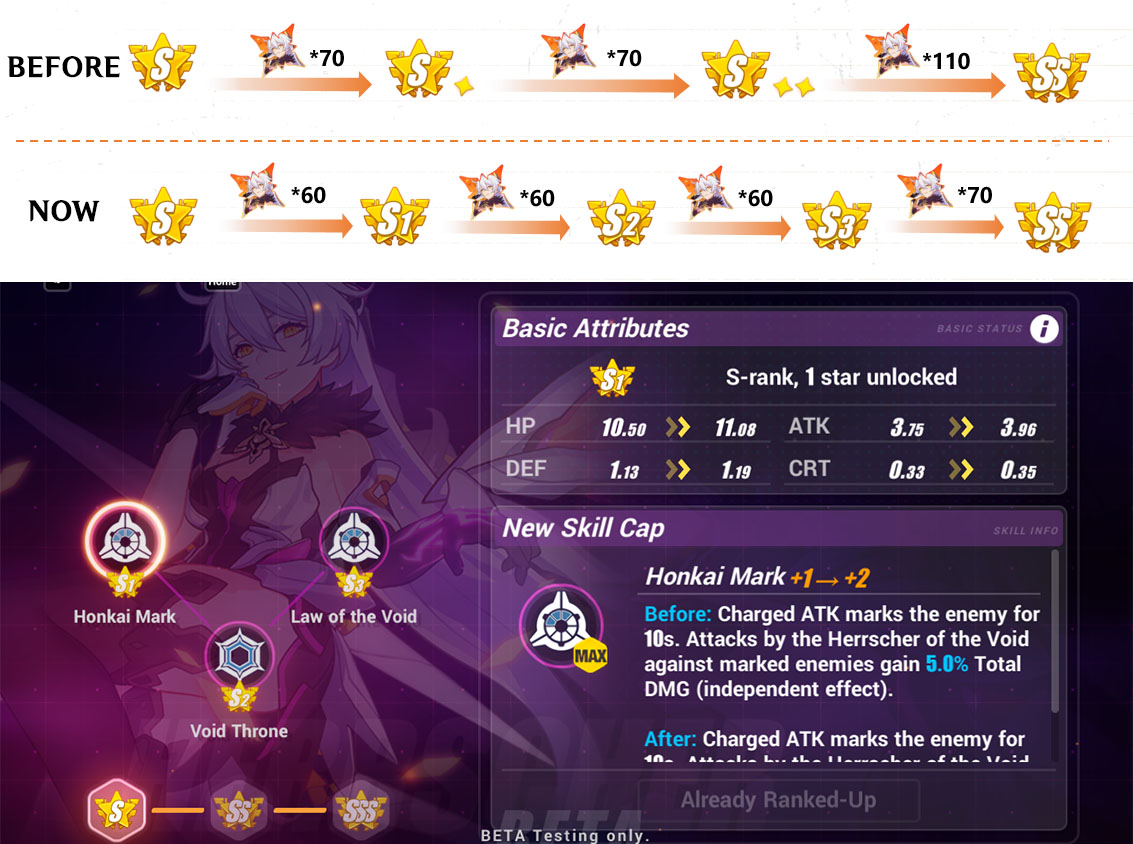 CUOATL: REVENANT (QUA) added to Memorial Arena. This is another two-phase boss, with additional three layers of quantum shield. 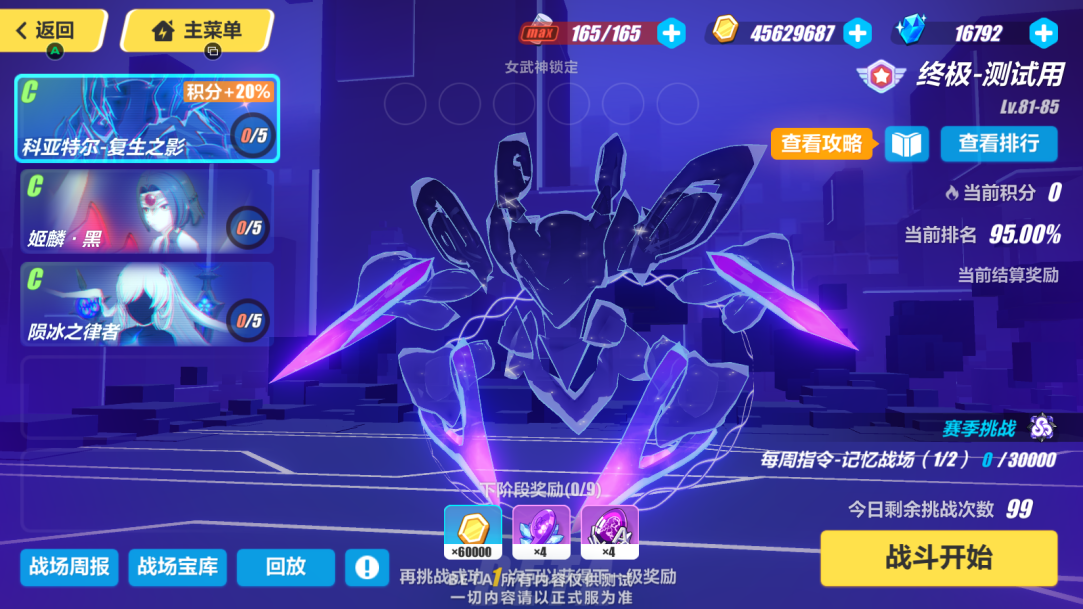 ◆Dirac Sea
For captains Lv80 and below, Dirac Sea is permanently closed, and only Q-Singularis will be opened. Goodbye, Dirac Sea...

Yabe! This is a pretty long overview, and there's still more to cover. Captains! Experience v4.6 yourself - coming this March 4!

Thanks to Ai-chan Team and everyone who helped throughout the beta. Visit Official Global Discord for info on future patches, or subscribe to me on YOUTUBE and TWITTER ~