There are many things to take into account to select a stigmata, in this guide I will point out the main elements and most relevant when making a choice.

Although it seems obvious to read, the description of your stigmata’s is the most important before making a good selection.

Each stigmata has three elements Stigmata skill, Affix skill and Set skills to know these elements and assess them individually is a good start to select a stigma. 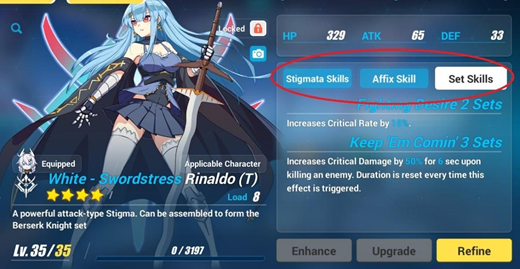 Stigmata Skill: It is the individual ability that has the stigma and that does not change between copies of the same stigma.

Affix Skill: It's a skill that has each stigmata individually and varies in each copy you get.

Set skills: They are 2 skills that have all the stigmata's but that require that a Valkyrie has equipped 2 or 3 parts to be able to activate; Top (T), Mid (M) and / or Bot (B).

You must always take into account first the Stigmata skill over the others because it is usually the strongest skill, then prioritize if it is worth equipping two pieces of the same set to get the Set Skill and finally the Affix, which is rather something extra and not so priority. 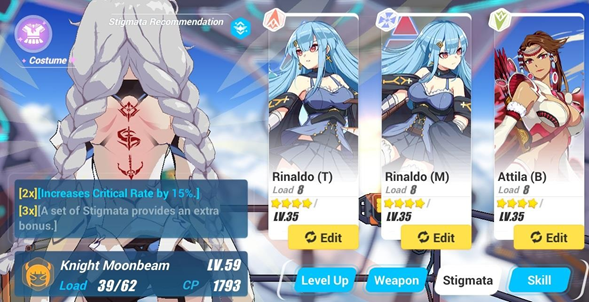 In the case of knight Moonbeam Select Rinaldo (T, M) because the ability of each stigmata alone is incredible:

The skill of Rinaldo (M) that causes paralysis is perfect Knight Moonbeam because it receives a bonus of damage against paralyzed enemies. Select Rinaldo (T) gives access to the Set Skill of 15% of Critical Rate that is perfect for a Valkyrie that attacks fast and very often as is Moonbeam. For Bot, select Attila (B) because your Stigmata Skill has a superior synergy with characters that can make a high combo quickly and keep it easily. 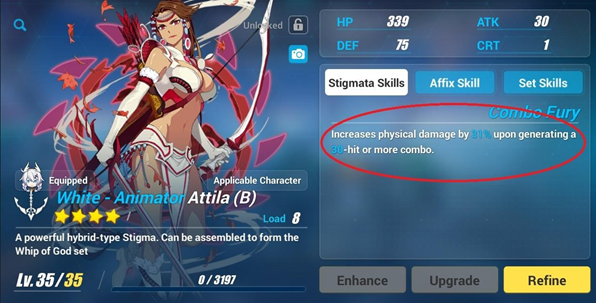 Know the passives of your Valkyries and their abilities:

Individually each Valkyrie has a set of passive and active skills; these skills have direct synergy with weapons and stigmata's, so it is very important to read carefully each description of the skill.

*In the skill menu of each Valkyrie you can check this information. 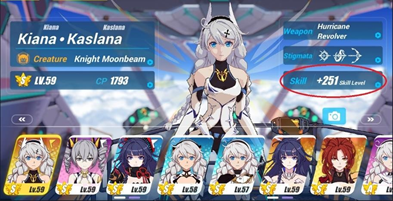 For example, in Moonbeam looking for a stigma or a weapon that paralyzes Rinaldo (M) will give a great damage bonus: 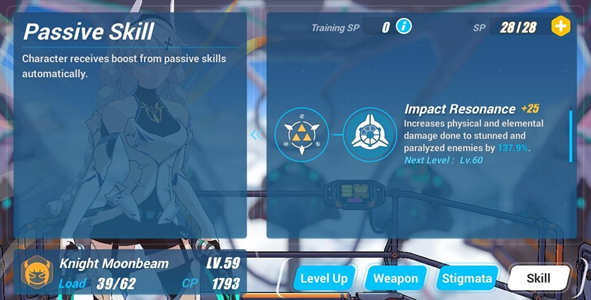 However, in Valkyries like Yamabuki Armor, looking for stigmata's that give a lot of defense to strengthen your passive shield can be a priority:

Since these two are many examples, so reading your passives carefully will give you more options when you select a stigmata.

Where will you use the stigmata?

It is important to know that Honkai impact 3rd has different game modes and each one of these game modes requires that you adapt to your Valkyries, playing the story mode is very different from playing in the infinite abyss.

When you play the infinite abyss you should consider the damage increase of the mobs as well as the "bleeding" that becomes more dangerous the longer the fight lasts and when the temperature of the abyss is higher.

On the other hand, when fighting against boss, you may prefer stigmata's that hurt against unique objectives or empower a character that is in charge of doing all the damage.

But these are just some examples. Other game modes and will require creativity in selecting your stigmata's. Of course you will also gain more experience as time goes by and keep playing. This is just an initial and general guide on how to select stigmas. Each Valkyrie is unique and can have several game styles that will require different stigmas.