Greetings, captains! This SUPPORT HANDBOOK aims to help captains to understand the team-building of the game.  This handbook consists of multiple chapters written by a group of veteran captains.

In this chapter, we will cover the whole Physical Support guide, ranging from Valkyries and Gears to ELFs. We will go in depth into Support that have a really good reputation and provide a few comparison between having support and pure DPS.

First of all, the Table of Contents for this chapter:

Get started by choosing the right Support Valk for your Physical Team. If you had read Chapter 1, then you will know by now that a good team consist of 1 DPS and 2 Support. Switch in 2 Support to provides buff then switch back to DPS for maximized score.

For Valkyries, there are a few of Physical Support battlesuit that are very strong. 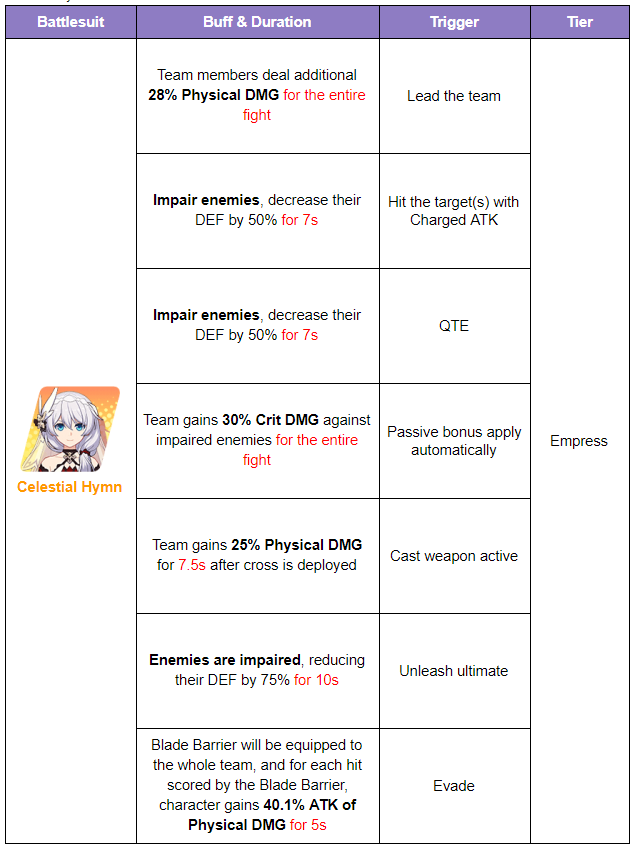 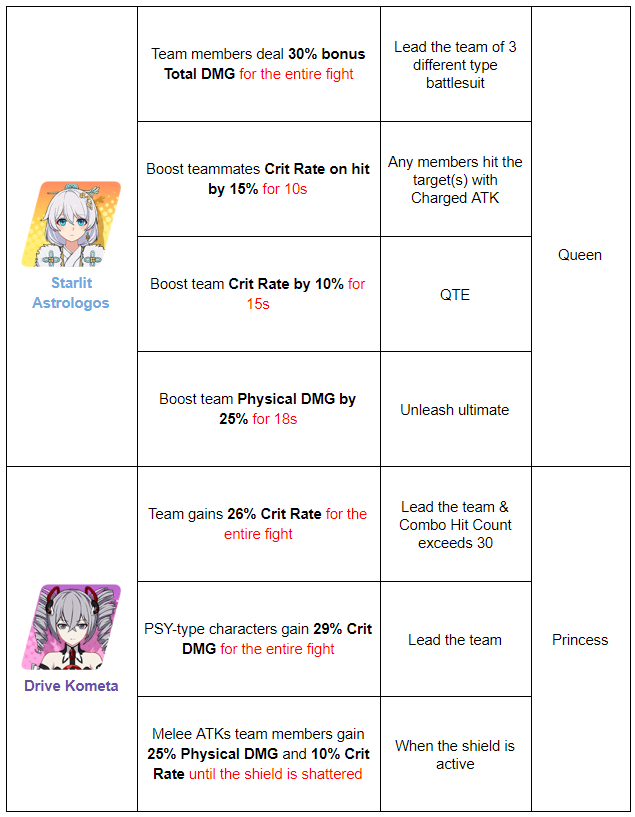 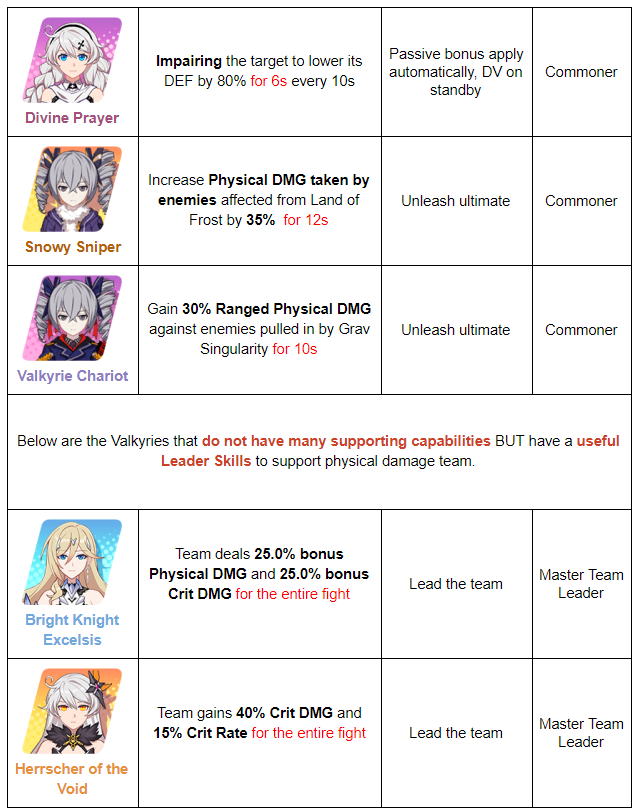 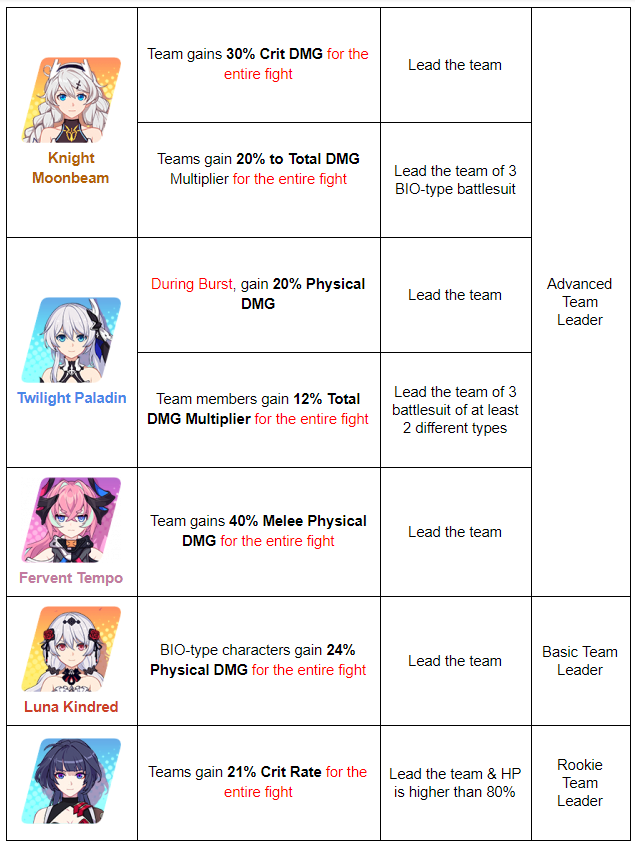 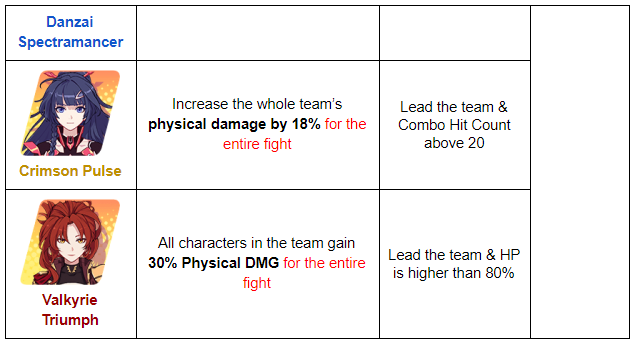 We will go in depth for Top 3 Physical Support:

Once again, if you had read Chapter 1, I'm pretty sure you already know what I'm going to talk about.

As you realized, a proper team will maximize damage output, but a proper switching or rotation decides the maximized score. "If two captains use the same team, the one that rotates properly will score higher."

CH are known for her pure Support kit that are currently number 1 in the game. Most of her movement have buffs of some sort that really helps Physical Team.

Were you expecting Hotel? Trivago at the end?

In simple conclusion, a few seconds of her movement will make the whole team stronger by a massive margin.

Here are the video of CH help DPS dominate the stages.

In case the video is too fast, I'll try explaining a bit. The team move like this:

In the video, CH only have 1 second appearance on-screen, do her job, then leave the rest to DPS (Of course with the help of Support #2). And this is her most used movement in battle; QTE and Weapon Active.

Her QTE decrease enemies DEF by 50% for 7s while casting weapon active will provide 25% Physical DMG to the whole team for 7.5s. Combining these buffs with proper Weapon and Stigmatas will greatly boost DPS in team.

Another video with almost the exact same movement but with different Support #2 and enemy:

Now let's see the difference between having CH as Support and rage through the stage without CH: 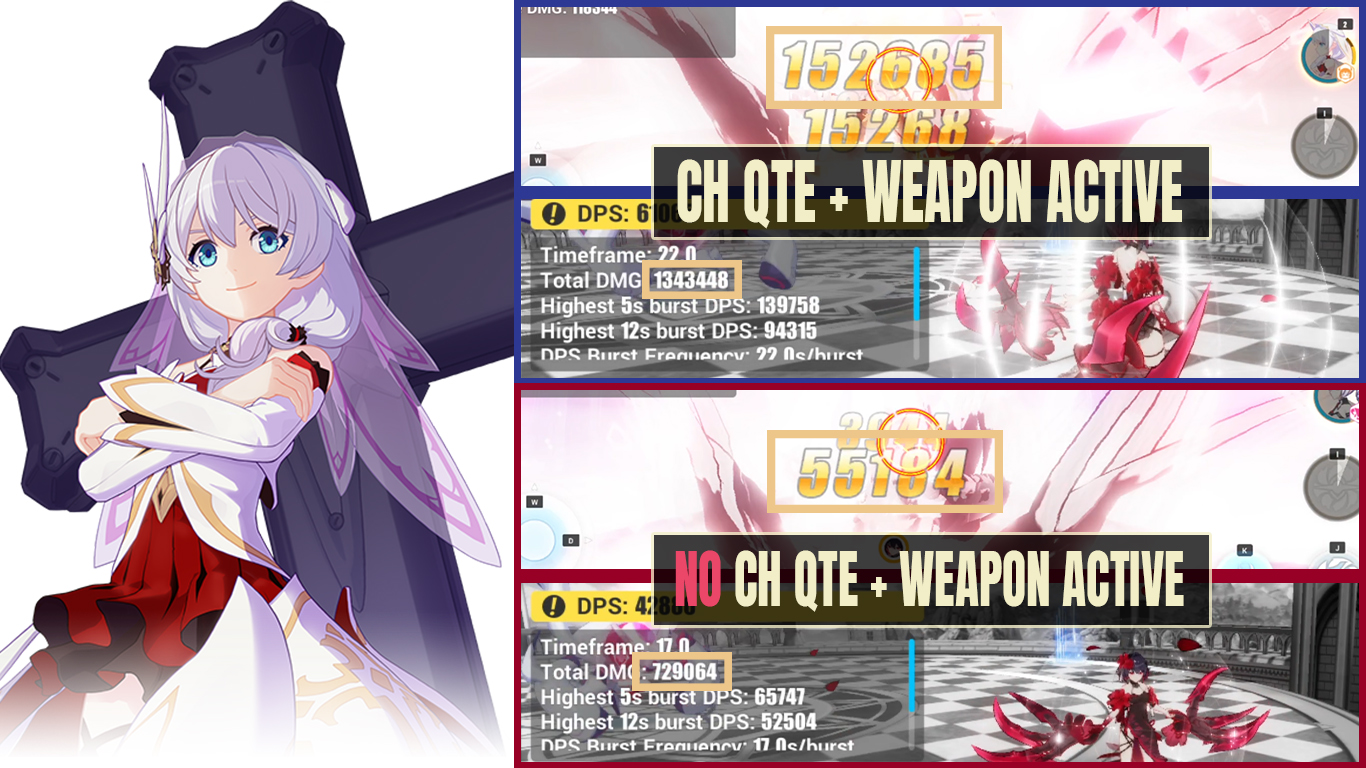 As you can see above, just a few movement from CH can be a BIG DIFFERENCE. Of course, you need to consider Team Synergy, Enemy mechanics and especially Time Fracture in battle.

In case you want to learn more in detail about CH, I'll link to CH Guide below:

SA are another Theresa known as also solid Support kit, next best after CH in the game.

While her buffs is not as much as CH, it is still better than other old Support Valkyries.

Her buffs may not look many, but she make it up with her special QTE. SA's QTE allow her to enter the field to deal damage without switching out the current DPS Valk. She can trigger buffs from Support Stigmatas easily like Gluttony, Newton, Mei Beach and Shuijing using this QTE. Something that even CH could not do.

As you can see, her most used movement in battle are mostly Charge ATK, Weapon Active, QTE and Ultimate.

Her Charge ATK allow her to restore 15 SP while her QTE boost team Crit Rate by 15% for 15s. Lastly her Ultimate boost Team Physical DMG by 25% for 18s. It is best to restore and stockpile SA's SP by doing her Charge ATK then switch to Support #2 or DPS so that right after SA's QTE, you can also trigger her Ultimate (Make sure DPS can also unleash Ultimate at the same time).

Another video with almost exact movement but with different enemy:

Now for the difference between using having SA as Support and bust through the battle without SA: 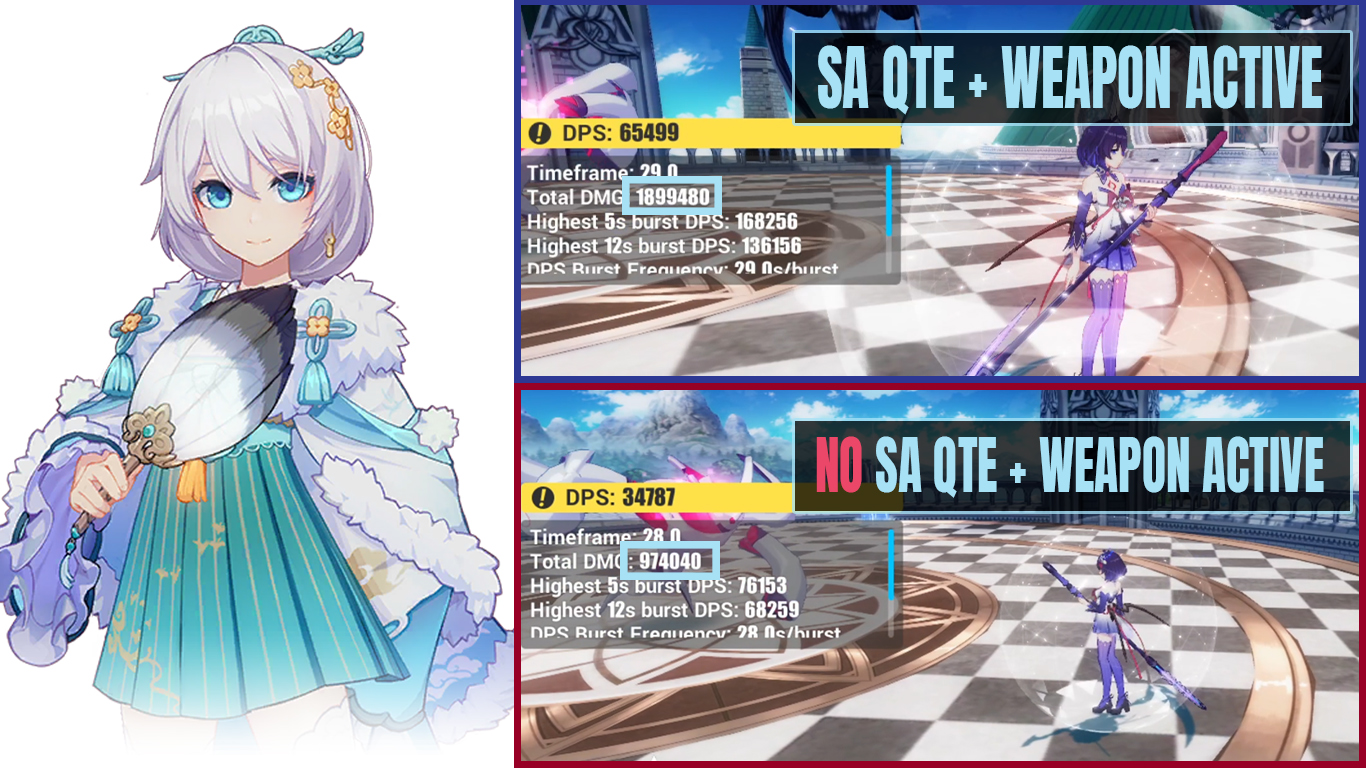 For SA, I trust that all Captains can easily use her because SA doesnt even need to be switch in to trigger her Support Stigma, but it is even better to do like I said before, stock her SP then trigger her Ultimate at the same time as DPS's Ultimate to get maximum output.

In case you want to learn more in detail about SA, I'll link to SA Guide below:

Although I said the third best, she is also top-tier Support just like CH. Truth to be told, Drive Kometa had always been paired with either SA or CH then DPS. That's how convenient DK is. Her support is also little just like SA but that's not what important.

What important is her shield, Crippling Field and especially her 5s Time Fracture. These three is a must when any Captain want to use DK as Support.

Her Evade not only slow enemies for 5s, but can also recover 4 SP for the whole team, a very sweet bonus. About her Crippling Field; enemies within the field suffer reduced Ignore Interrupt, take 50% more shield DMG and are weakened (deals 10% less DMG). And the best part is her Shield, when active, melee attacks will gain 25% Physical DMG and 10% Crit Rate permanently as long as the shield is not breached. But don't worry as shield can be reset with DK's QTE or Ultimate.

Another video with almost exact movement but with different enemy:

Now as usual, the difference in term of damage output between having DK as Support and break through the wall without DK: 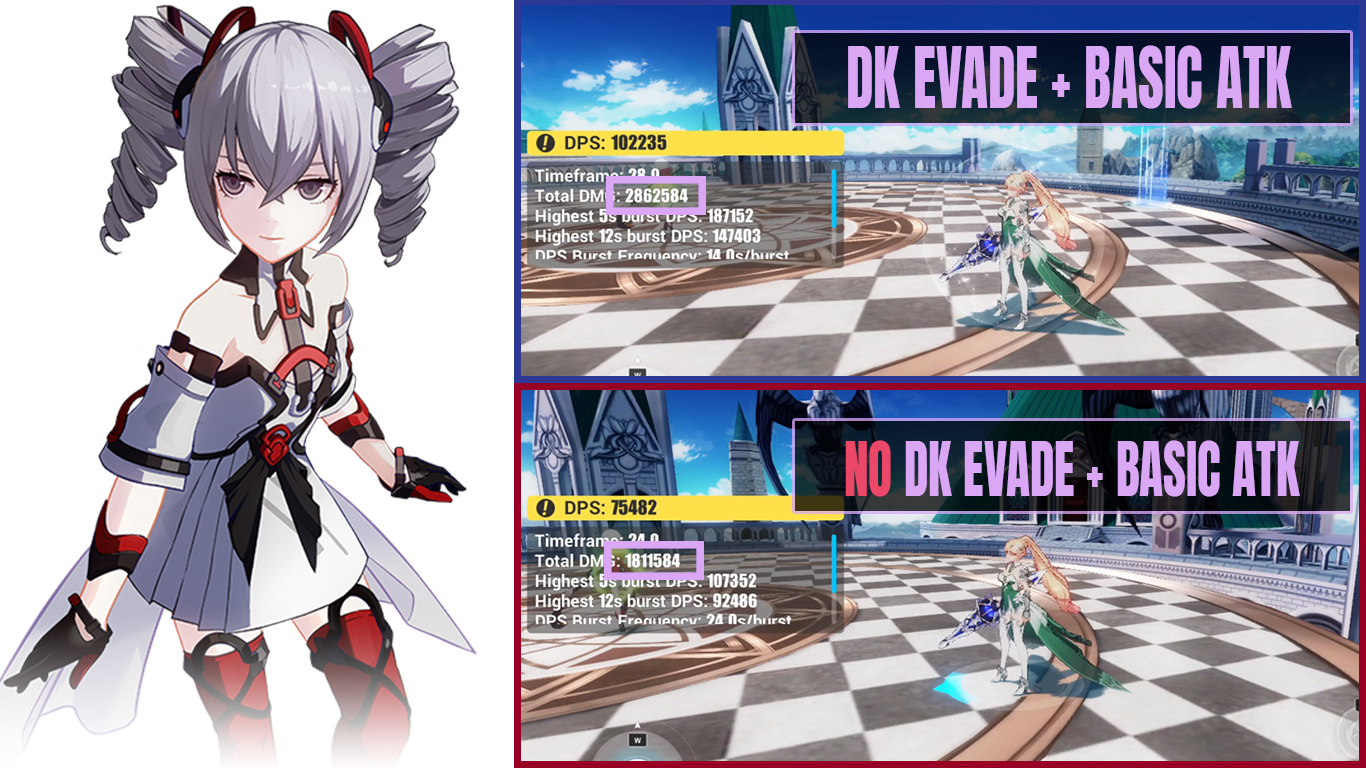 In case you want to learn more in detail about DK, I'll link to DK Guide below: 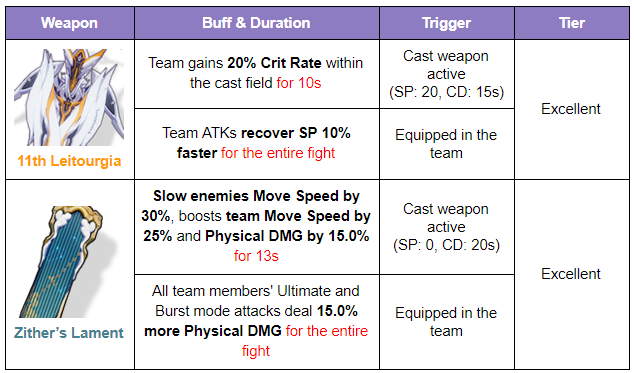 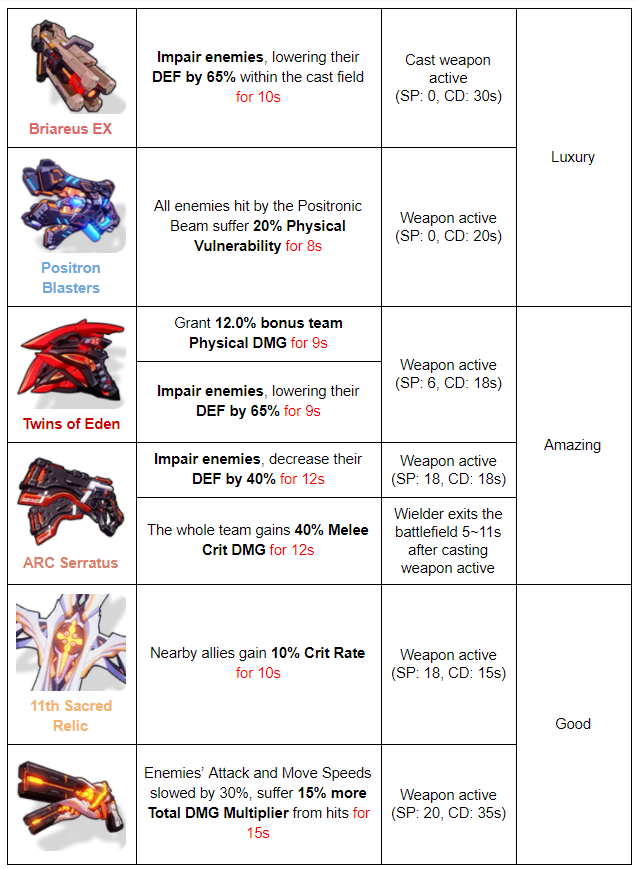 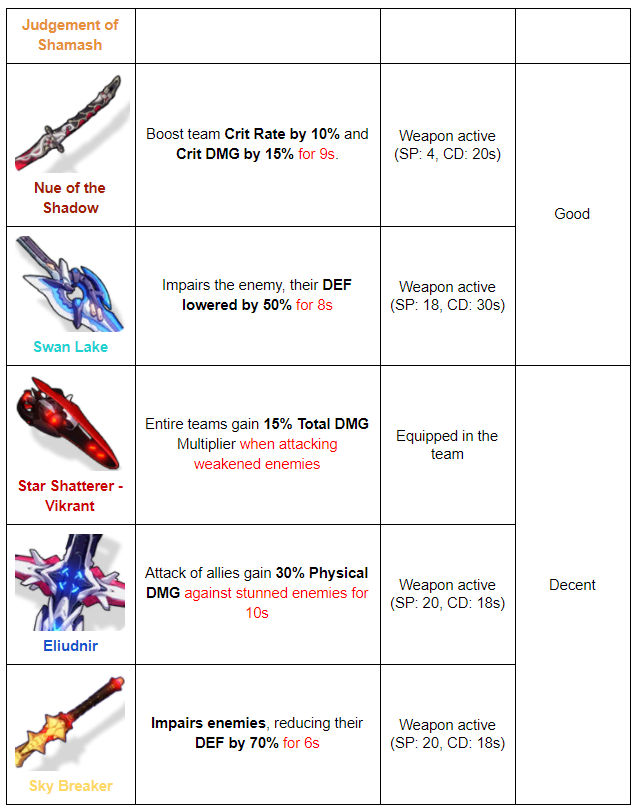 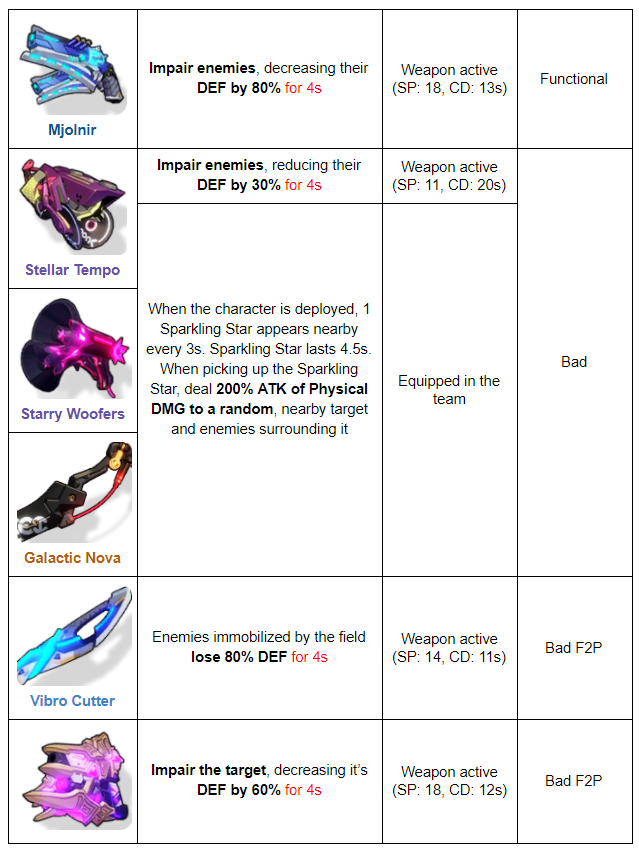 For Weapon and Stigmata, I will only show one of the Support Gear as even with just one comparison, you will get the gist of all other weapons.

11th Leitourgia is one of the best Support Weapon in the game, especially if equipped by CH. Just by casting the Active Weapon, nearby teammates will gain 20% Crit Rate for 10s.

Sure the SP wanted is pretty high; 20 SP per active skill, but it is very worth it.

That is why 11th is the best with CH because if equipped by CH, 1) During the active skill, CH will gain 5 SP during this period. 2) CH's attack restore 35% bonus SP. And the whole team gains 10% SP regen, this bonus is global (doesnt need to be equipped by CH). 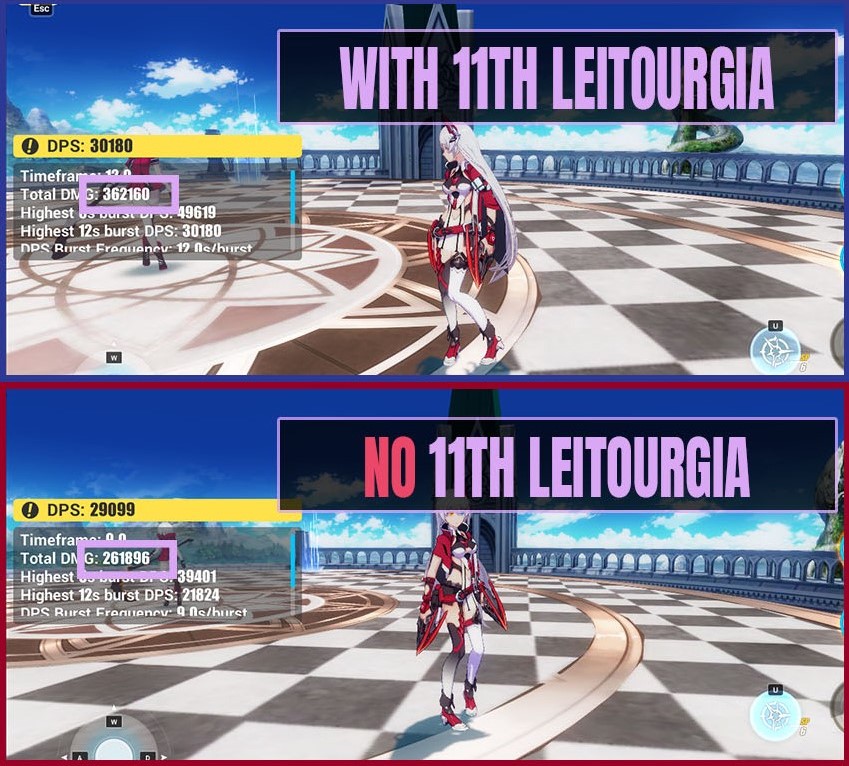 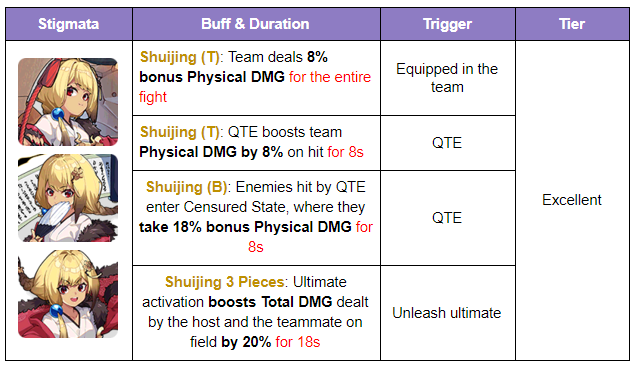 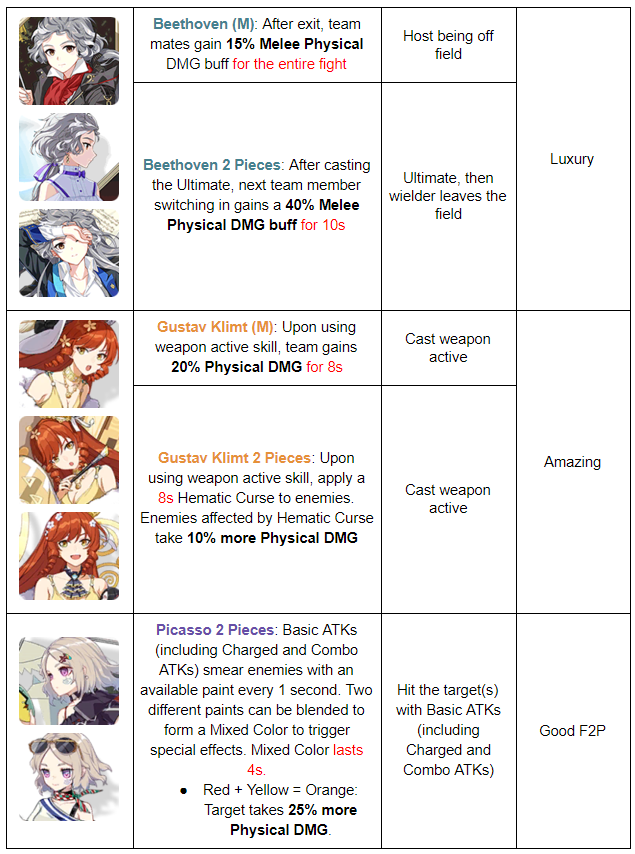 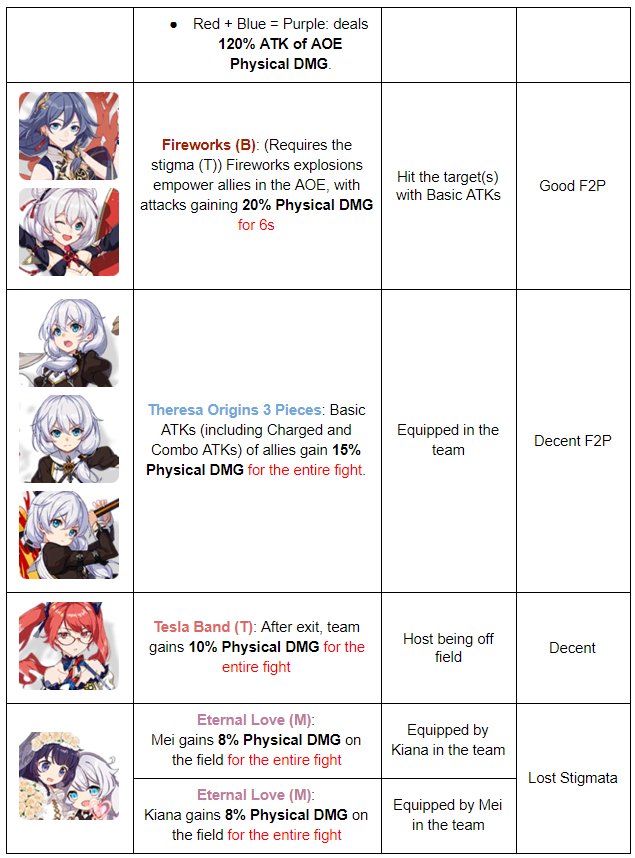 As you already know, CH is the best Support Valk, but she didn't have her own Signature Stigmata (Kallen Hymn is useless that doesnt count). But SA does, which are Shuijing Set Stigmata, and for Support Stigmata, I will only show the comparison between using Shuijing and no Shuijing. 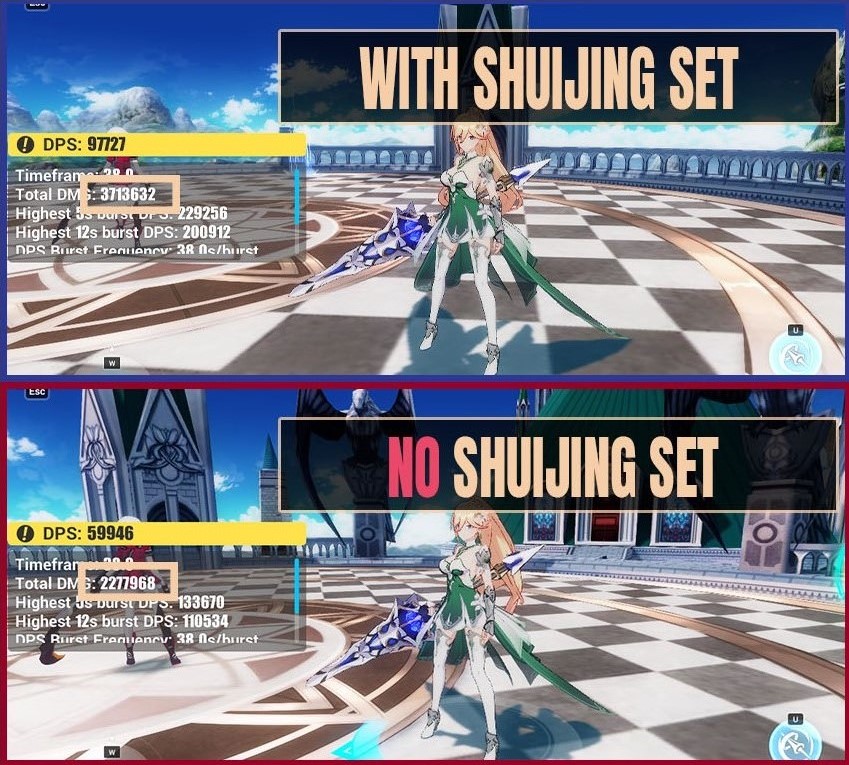 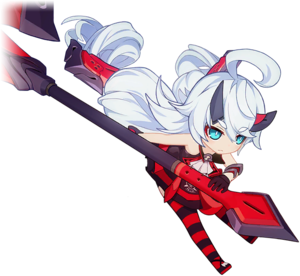 Blood Embrace is the A-rank Physical ELF. She is more of a Physical DPS ELF that is mostly used in Memorial Arena and Infinity Abyss to break shields and provide some extra damage.

All of her skills work the best in shield breaking rather than bestowing any support buff to the teams. But that does not mean she is not needed in a fight, keep in mind that some enemies and bosses have a strong shield and you need to break the shield before making any important strong attacks. In these cases, BE is very much welcomed as her utility can make a strong impact toward the enemies' shields.

Examples of the importance of shield-breaking can be seen in the Damage Multiplier Section (Chapter 1) where Valkyrie versus Kallen. The difference between dealing damage toward Kallen with shield and Kallen with broken shield have a massive difference proving the usefulness of having BE in the teams. 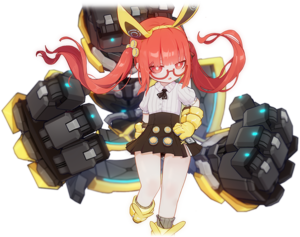 Tesla ZERO is the 'new' S-rank Physical ELF. Unlike BE that cannot buff any teammates, Tesla can buff teammate's Phsyical DMG:

Stated above, Tesla have quite a lot of support for Physical albeit only small number. But let's be real, most of us at most will only have Tesla at 2⭐, and by that, the only buff Tesla can give is:

Sure it is small in number but with the help of Support Valkyrie, Weapon and Stigmata, that small number may be beneficial.

For more detailed info of Tesla ZERO and even her damage comparison, you can see it in the link below:

This is the end of the support guide for Physical Team! There are many different support for Physical Team, you just need to choose what is available in your Hyperion and apply it in your team!

For more references in finding the best strategy for your team, below are link where you can learn from other Captains on how to find the best Support and rotation for your Team:

Tap the link below for more Support Handbook Chapter: