Greetings, captains! This SUPPORT HANDBOOK aims to help captains to understand the teambuilding of the game.  This handbook consists of multiple chapters written by a group of veteran captains.

In this chapter, we will go into detail about the numerous Damage Multipliers that are available in the game. It is important to understand that, of these multipliers,

This all could involve quite a bit of math, but the short simple explanation is the more diverse multipliers you have, the better.

PDM increases the damage of all physical attacks. As shown in the examples, they may come with conditions, but regardless, they will all be regarded in the same multiplier. For instance, melee physical damage and combo attack physical damage multipliers all fall into the same umbrella.

EDM increases the damage of all elemental damage. It is important to know that lightning, ice, and fire damage multipliers are all part of the Elemental Damage Multiplier. You may think of different elements as another specified condition. If you have +30% elemental damage and +30% fire damage, they will still add together, being the same multiplier.

This will increase all of the damage where applicable, both physical and elemental.

Crit Rate (CR): CR determines the rate of which a physical attack will score a critical hit. It is not a multiplier exactly, instead, it tells us how often the Crit Damage multiplier will be applied in damage calculations.

It is important to note that CR is not the same as the CRT stat. The example above will increase your CRT stat by 40%, not Crit Rate. Below shows the calculations to determine your CR.

Crit Damage Multiplier (CDmg): This multiplier is applied for critical hits. This multiplier starts at 2x or 100% by default. Therefore, if a valkyrie gains 50% CDmg, that means her new CDmg will be (1+100%+50%)x=2.5x. This also means CDmg is highly diluted by default and reliant on crit rate, making it a lesser multiplier.

Shield Damage Multiplier (SDM): This is simply an additional multiplier that only affects shields. Elemental damage typically does not deal damage to shields. Will not have effect against shieldless targets.

As before, the same vulnerabilities will be additive and different ones will be multiplicative.

These debuffs can be identified by language seen above, that specify "more Fire Damage from the host." Also, remember these are unique multipliers, the Fire damage debuff will not stack with other Fire Damage Vulnerabilities, but they will also not stack with its own stacks from the same stigmata. For instance, Thale M has a debuff causing enemies to take 2% more Fire Damage from the host, and stacks up to 10 time. Each stack will be unique and interact multiplicatively with other stacks. Therefore, 10 stacks will result in 1.0210=1.219x rather than just adding to be 1.20x.

You need to consider

Let's take a look at some of the most common rotations.

Based on the examples, the rotations consist of:

DIFFERENT ROTATIONS FOR DIFFERENT BOSSES
You understand how a basic team rotation works. Now, you need to adjust them accordingly against bosses in Memorial Arena or Abyss, since each boss has its own mechanics which need to be exploited to gain high scores.

Here's an example of the same team against different bosses. Note how the rotation is different in each vid. You need to adjust it even more with different gears or support valks.

REFERENCES
Figuring out the best rotation on your own is satisfying and rewarding, but can be difficult and takes an unnecessarily long time. That's why most players copy or adapt runs from other captains! Here are some resources that help find the best strategy for your team.

1-4-1 Comparison between typical switching and changes from SA

Starlit Astrologos QTE allows her to enter the field to deal damage without switching out the current valk. She can trigger buffs like Gluttony, Newton and Shuijing using this QTE. This is the reason her rotation is a bit different. 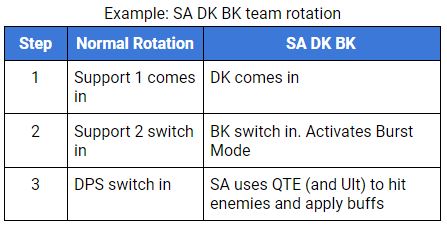 If DPS duration is long enough, SA can even QTE again, re-applying her buffs!

When you switch out to another valkyrie, there can be a series of specific button mashing that can make your game play a lot smoother. In layman's terms, there exists specific strategies for switching out/in that improves scores greatly.

Prevent your valkyrie from attacking when switching out

It's recommended that you learn to cancel out switch attacks. While a valkyrie's switch attack is automatic upon switching in, they're not welcomed in a lot of cases. A lot of powerful stigmatas are triggered by direct attacks. Often, these stigmatas include but are not limited to Newton B, Mei: Beach Party M, New Years TM, Jin Shengtan TM, and/or Summer Day. Switch attacks are considered a direct attack, so to prematurely set off these stigmata effects from a switch attack that is seemingly outside of your control is not ideal. This section will highlight which switch attacks you should prevent and how you can prevent the attack.

One of the most common support valkyries, Drive Kometa, attacks forward upon switching in. The gif above displays both sides: DK attacking upon switching in, thus triggering her Newton B prematurely, and DK quickly putting her shield up to cancel that very same switch-in attack. To cancel this attack, you must immediately press the evade button upon selecting her icon to switch into. Because the window of opportunity to press evade and cancel the animation is very tight, you must be very quick.

Divine Prayer and Himeko battlesuits are prominent in their support, especially in elemental teams, and Celestial Hymn is extremely common in physical teams.  Unfortunately, they are infamous for attacking upon switching in. To fix this, you must quickly press evade upon switch-in to cancel the switch attack. Additionaly, you should be careful not to accidentally ult-evade; some Ultimate Evasions have direct hits that can proc stigmata effects too.

In the support area, the greatsword-wielding Himeko battlesuits are outclassed by the greatsword-wielding Olenyeva Twins, especially by Motolov Cherry. Unlike the Himeko battlesuits, the twins do not have a non-QTE switch attack. Because the twins waste no time switching into, compared to the need to evade to cancel switch attacks of Himekos, there is a greater advantage to using the twins for Blood Dance support than Himeko. The only exception to this is Vermillion Knight. When you turn off VK's QTE, her switch attack also gets turned off. In that case, VK is actually even better than the twins as a Blood Dance castor.

Insta-Cross
Theresa's support Battlesuits, mainly Celestial Hymn and Valkyrie Pledge, deploy a cross before switching out to maximize their support. However, when Theresa deploys a cross, it's possible lessen the time it takes to deploy the next valkyrie. The gif above shows the "normal" cross-deployment before QTE-ing to the DPS.

In this gif, it shows the DPS QTEing almost instantly after the cross is deployed.

To pull this off, press the valkyrie icon you wish to switch out immediately after pressing the weapon's active button. Doing this will save you microseconds that can be crucial due to the nature of the short-lasting support of stigmatas such as Newton B and Mei: Beach Party M.

Tip: When/if your valkyrie sometimes freezes for a second after switching in, thus preventing additional actions to be performed, hold the directional stick while switching in to cancel the delay/freeze.

QTE extends switch-back CD
It's not always good to have QTE enabled. Most of the time, these QTEs waste too much time for the little that they do and can ruin your score performance. Due to some QTEs that last too long, they waste valuable time for support effects that are in effect. And worse than that, when you tap the QTE-triggered valkyrie icon and switch into that valkyrie, your previous valkyrie will take longer of a CD to be able to be switched back into battle again. This isn't good when you need to rotate quickly to match up with the timing of the boss's attacks and/or your gear CDs. Here's a list of Valkyries you want to turn off their QTE: 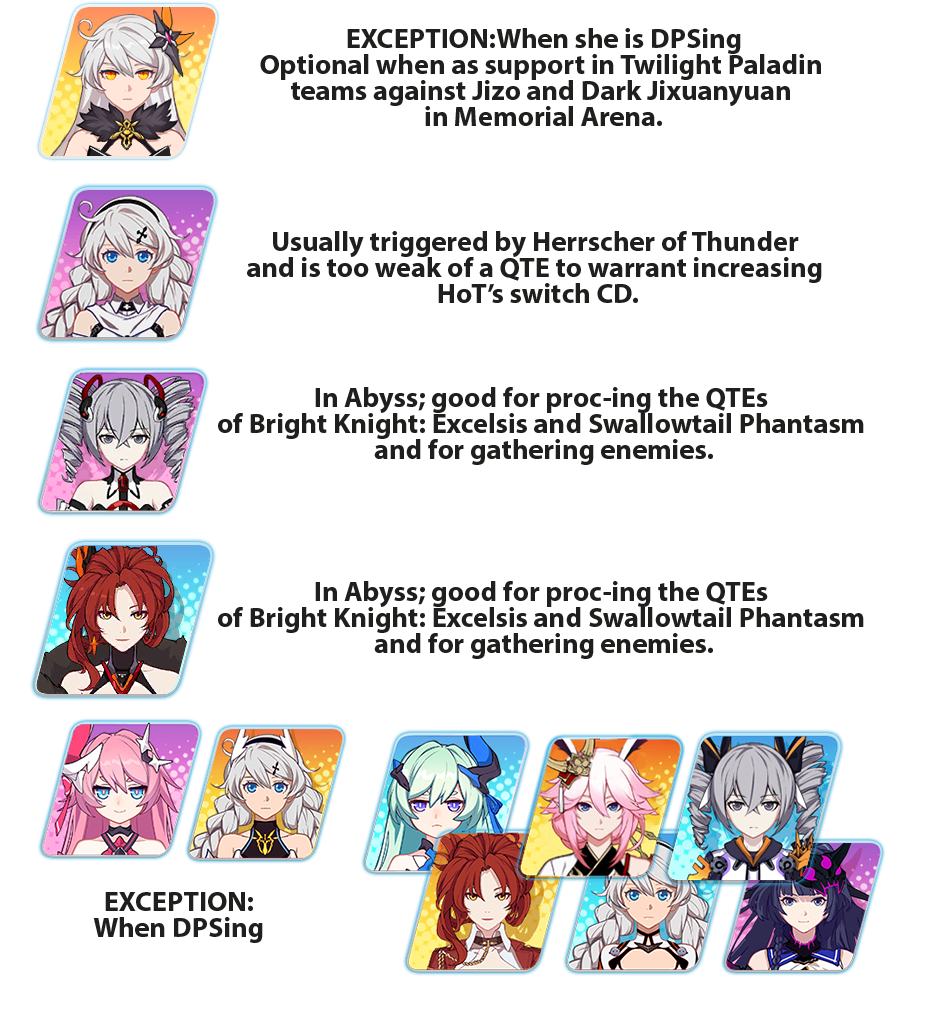 Celestial Hymn and Drive Kometa both have useful QTEs. They're useful for Time Fracturing, thus slowing down the timer in Memorial Arena. However, their QTEs also inflict damage that are considered direct hits. Direct hits can proc certain stigmatas. Which is why, in certain situations where your DPS is not ready to switch back out yet, you would want to cancel these two support's QTEs with the evasion button upon their QTE-entry. If performed correctly, you should see something similar to the gif below.

Staying back far away enough to prevent Switch Attacks
We've mentioned canceling QTEs and stopping switch attacks to stop the triggering of certain stigmatas. However, some valkyries' switch attacks cannot be avoided despite pressing the evade button.

Namely, Knight Moonbeam and Lightning Empress have switch attacks that cannot be stopped. As a result, they tend to proc their Newton Bs, Mei: Beach Party Ms, and Jin Shengtan TM prematurely. And if this happens, then the DPS will not be able to make full/any use of these support stigmatas. The answer to this issue is to move far away enough from the enemy. When your valkyrie is far away enough from the enemy, switching into KMB or LE will not proc the switch attacks, and therefore there won't be any direct hits setting off any support stigmatas unintentionally.

Not really too advanced of a technique but after QTE-ing, SN can take a few slashes before she initiates her charged ATK. This can waste time in the most optimal gameplay, as shown in the gif above. However, if you press and hold the basic ATK button after SN begins QTE-ing and before she finishes QTE-ing (lands on the ground), she will skip those slashes and get straight to her Charged ATK. If performed correctly, it will look like one of the two attacks in the gif below.

Commonly done with Celestial Hymn as the first QTE, it's possible to cancel the animation of the first QTE and dive straight into the second QTE. The steps to pull this off are:

Doing so will cancel the first QTE's animation that locks your valkyrie and enters straight into the second QTE. This should save you about half a second. It can be difficult to pull off but matters a lot if you wish to minmax your scores.