Greetings, captains! This SUPPORT HANDBOOK aims to help captains to understand the teambuilding of the game.  This handbook consists of multiple chapters written by a group of veteran captains.

This is the final chapter covering the general Total DMG Multiplier (TDM) Support guide. In this guide, we will be taking a look at the few yet universally good supports for all and any types of damage. 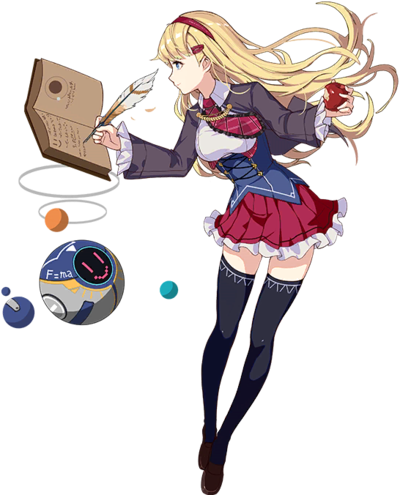 Before we get into it, a reminder that TDM affects all and any forms of damage. The only thing that matters is who/where is the DMG coming from. Meaning if something boosts QTE TDM, it means it will boost the DMG of just the QTE but it does not matter if the QTE is Physical and/or Elemental DMG. And lastly, we will be covering only the TDM support aspects of the gears mentioned in this guide.

Why Newton B is the best
Because Newton B's debuff can be stacked on top of other Newton Bs, DMG output can drastically shoot through the roof! If your best damage output without Newton B is 500K DMG, then with a Newton B, the DMG can become 131% stronger, resulting in 655K worth of DMG instead. With two Newton Bs, it becomes 810K, and 965K DMG can be achieved with three Newton Bs. Provided below is a comparison of not using any Newton B to using one and two Newton Bs. As you can see, just Newton B alone can achieve powerful results. 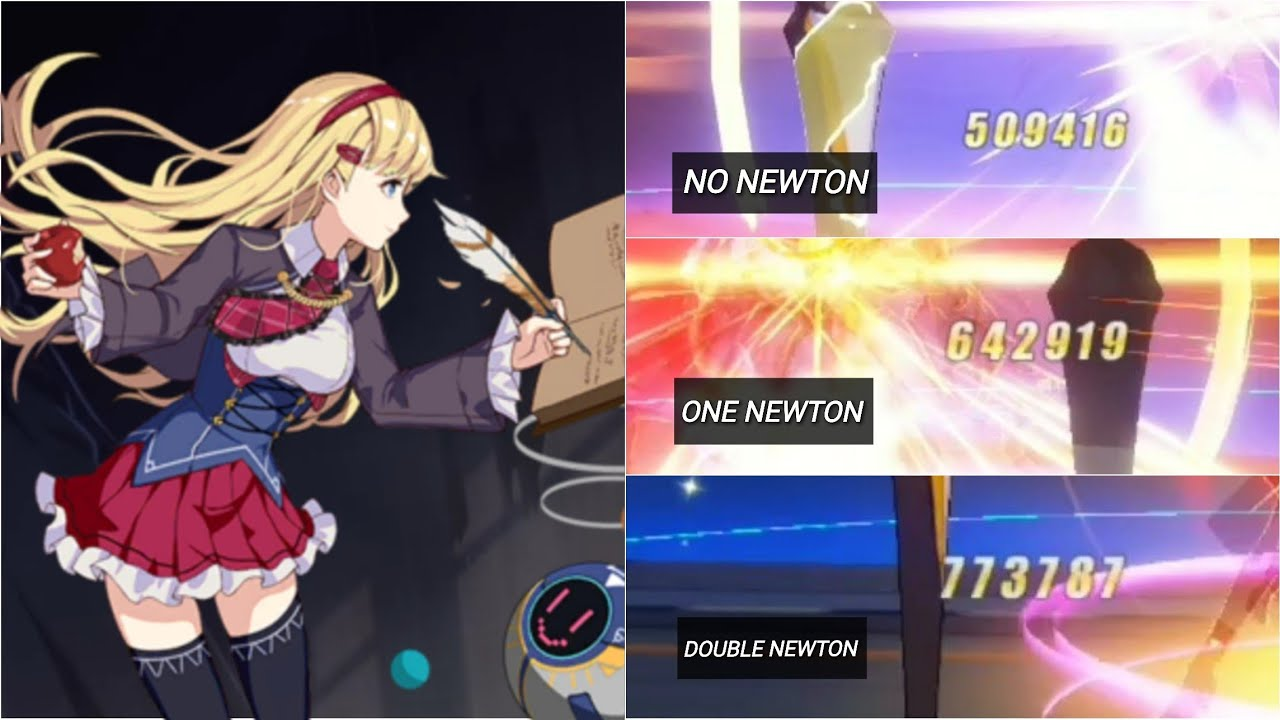 When Newton B is proc'd, its Challenge Mode debuff is inflicted with an icon over the enemy. The icon dictates which enemy is currently under Challenge mode and therefore intake 31% more TDM. Newton B is triggered by any direct attacks of the host, such as Basic ATKS (including Combo attacks), Ultimates, QTEs, weapon's active skills, attacks from stigmatas from the same host, etc. This stigmata's debuff effect cannot be extended by Time Fracture!

When Challenge Mode is initiated, a CD for host's Newton B is shown below. Above is a picture displaying how long it will take before you can reapply Newton B again. Keep in mind that when the host of Newton B switches out, the CD will be hidden. This circle CD lasts for 10s, in which 5s of the debuff is represented by the first half of the CD. This CD timer is a great way to keep track of when you can apply/reapply Newton B.

How to utilize Newton B Part 1: Apply and React Fast
Due to the short window of Challenge Mode, the player has very little time to make use of the debuff. After proc-ing Newton B(s), you need to switch to your DPS and unleash their strongest attack asap.
https://www.3rdguide.com/web/teamnew/detail?id=6535
Provided above is a link to a video depicting this usage of Newton B at around 0:42. This such example is Flame Sakitama quickly applying Newton B before immediately switching out to Vermillion Knight. Before all buffs/debuffs wear off,  Vermillion Knight uses Might of An-Utu's weapon's active for massive damage.

How to utilize Newton B Part 2: Reapply off-field and time it accordingly
Newton B can also be applied while the host is off-field as long as the host still directly attacks. Keep in mind that crosses aside from Hekate's Gloom are not considered direct attacks of the wielder. Some setups take longer so it can be hard to make use of Newton B. But if a support host procs Newton B procs Newton B early and therefore starts the 10s CD, that same host can then use a delayed and/or prolonged attack to reapply Newton B later. By doing so, the DPS that needs the extra time to attack will be able to line up her attack(s) in time with the re-applied Newton B. Ideally, you want to wait until the Newton B CD is around halfway in before you switch out.

Attacks like JingWei's Wing's prolonging weapon's active and Celestial Hymn's delayed and prolonging ultimate can apply Newton B while the host is off-field. Meaning DPS such as Twilight Paladin and Night Squire can activate their ult first and still land their attacks within Challenge mode.
https://www.3rdguide.com/web/teamnew/detail?id=6785
In this provided link, the video shows Drive Kometa prematurely setting off Newton B at around 0:35. After that, she uses Vikrant's weapon active; the weapon's active field will hit enemies inside of it continuously and therefore reapplying Newton B later despite the host, Drive Kometa, being off-field.

(**) Mei: Beach Party M - Let's discuss a bit about Mei: BPM. Keep in mind that we will only be exploring the TDM support aspects of this stigmata.

Mei: Beach Party M is like the M piece version of Newton B. Like Newton B, this stigmata's debuff effect cannot be extended by Time Fracture! Let's see some comparisons:

Like Newton B, Mei: BPM uses the same icon to denote when its debuff is in effect. Because of this and the fact that both stigmatas have different active and CD times,, it can be confusing to determine which debuffs effects are active.

CD Timer
Unlike Newton B, Mei: BPM does not have a CD timer to tell the player how long it will take before they can recast the debuff again. And with the shorter duration of Mei: BPM's debuff and CD, players are recommended to just “apply and react fast” most of the time.

How to use Mei: Beach Party M: Mostly “Apply and React Fast”
Because Mei: BPM is like Newton B in almost every aspect, the strategies for utilizing Newton B, as mentioned in the Newton B section, can be used for Mei: BPM as well. DPS who can quickly dish out bursts of DMG, such as Void Driftor, Memento, and Hawk of the Fog can make use of Mei: BPM.
https://www.3rdguide.com/web/teamnew/detail?id=7358
In the link provided is a video depicting Divine Prayer's quick entry to apply Mei: BPM and quick exit to Hawk of the Fog. Immediately upon entry, Hawk of the Fog ult-evades to cast her ultimate, all while the debuffs are active. In addition, Divine Prayer can be observed later on using Kikaku's weapon active to re-apply the Mei: BPM for Hawk of the Fog.

Team has 1.00 longer pick-up range (cannot stack). Every second or successful hit grants 1 charge (independent stacking methods). At 12 charges, the next enemy hit drops a candy (CD: 2s). 12 charges at stage entry. Unpicked candies will disappear in 8s. Picking up a candy induces Gluttony State, where the team deals 16.0% bonus Total DMG for 5s. Picking up another candy in Gluttony State boosts bonus Total DMG to 24.0% and resets the duration.

TLDR: Basically, picking up a candy buffs your entire team's TDM temporarily, and picking another candy up before the previous effect expires strengthens the buff and refreshes the buff duration. Your team also gets a bonus 1.00m pick-up range.

Candies from Gluttony T stack and buff the entire team's TDM, and since it's a team buff, it does not dilute with TDM intake-debuffs. Candies spawn when the host directly hits an enemy while she has 12 stacks. The stigmata does not have a counter for stacks but you gain 1 stack for every direct hit and second passed (max 12 stacks storable). So just apply plenty of direct hits from the host (host being switched out still counts) to make the most out of it.

Candies can also be utilized in the “Apply and React Fast” fashion. So for a valkyrie like Divine Prayer, she does a quick kick upon switch-in, thus spawning a candy, and switches out asap to a DPS like Hawk of the Fog to ult-evade to cast ultimate. Due to the speed of the execution of Hawk of the Fog's attack, she will be able to enjoy the quick burst of extra TDM buff from Gluttony T.

This is the end of the support guide for Total Damage! There are not too many different supports specifically for supporting Total DMG. However, among those that do exist, they are the most used. I would like to give a special mention to the Judgement of Shamash, Jade Bloom, and Star Shatterer: Vikrant; they have been listed in earlier chapters due to their preferred support usage despite being TDM. Total Damage Multipliers affect all forms of damage and are a separate form of multiplier themselves. Usually, they test how well the player can utilize them due to the short duration that those buffs/debuffs have. As a versatile buff that doesn't get diluted as often, Total DMG Multipliers such as Newton B are the most preferred support in the game.