If you haven't checked the v3.3 Explanations, I suggest you do it first, I put most of the greetings and welcoming jokes there
If you came here from that guide there, congratulations! You've earned it.

Let's not delay it any longer and welcome the all new: 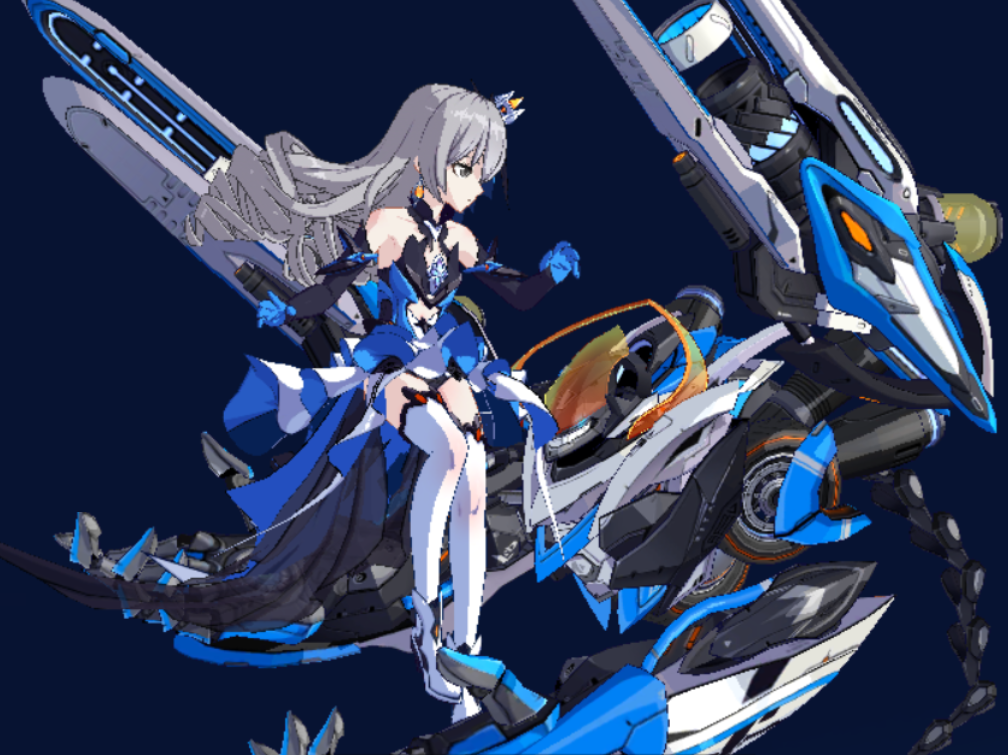 At last, a non-fanart mature Bronya!

we're here at last, a Herrscher who doesn't actually destroy the world.
No wait, I shouldn't say that in a guide…

But yes, if you've been playing or watching the story, she is the embodiment of the Reason Jewel after thwarting Seele’s plan to--
Or you can just play the story! I'm here to explain the battlesuit anyway..
So let's just start!

[Herrscher of Reason] (HoR) is the newest addition to the valkyrjas following the events in Quanta Sea, she is a Close-and-Far ranged hybrid, Ice element based Valkyrja with amazing burst capability and absurd sustainability.
Her ultimate grants her awesome mobility and sustained DPS while maintaining Crowd Control capability, almost making her as the king, no, Queen of all trades.

She is the Awakening from the S-rank valkyrja [Dimension Breaker], therefore she has some shared skills which benefits from [Dimension Breaker]'s rank. I will explain those later, but now let's divide the guide into several parts.

Overall Info
[Herrscher of Reason] has a very different gameplay and feel compared to the rest of the bronya valkyrjas, this is because her basic attack is no longer a charged attack, but instead, a close range combo.
She also brings uniqueness to the game, having 3 valkyrja modes, a new debuff, as well as new features into the game.
She is also the first elemental-focused type of bronya valkyrjas, and it is Ice element, the rarest out of the 3 elements in the game.
She also changes heavy weapon's projectile models and some of their existing skills, I'll explain this thoroughly later.
She also comes with her signature weapon and stigma, so count your crystals, it's splurging time!

Every hit pushes you towards your target, and on the 4th and 5th sequence, namely drill and explosion, you can move around freely while attacking, so you can position yourself better.
The drill also slightly pulls in nearby enemies, enabling crowd control.

When she is doing drill and explosion, [Herrscher of Reason] builds a barrier on her front and sides. This barrier blocks any attacks from both her front and her sides completely, be it physical or elemental damage, but it doesn't block debuffs such as paralyze. This barrier also reduces any damage taken from behind by 30%.

The explosion also marks hit enemies with “Analyzed” debuff, I will explain this later as well.

Charged Attack
[Herrscher of Reason] has a bar called Konstruktyom above her HP bar, it is her main damage source. The bar has 480 maximum value, and each 120 fills one bar.
There are many ways to increase Konstruktyom:

Konstruktyom is used to enter Herrscher Mode, which I will explain below.

Herrscher Mode: DEA Raison
Before I start, I can't help but notice that it's a call to the French sentence “Raison D'être”, which means “Reason for Being.” Which is cool!

*ahem* Okay, back to where we are.
Holding the basic atk button will pushes her away from her current target and enter DEA Raison, her Herrscher Mode.

In this mode, [Herrscher of Reason] will shoot her currently equipped weapon at her target every time you do an attack. This attack differs depending on what type of weapon she is equipped with. You can also move while shooting.

With cannons, she shoots 4 rounds of big drills onto the target, this counts as stage 3 charged shots and explodes, dealing damage in an area. 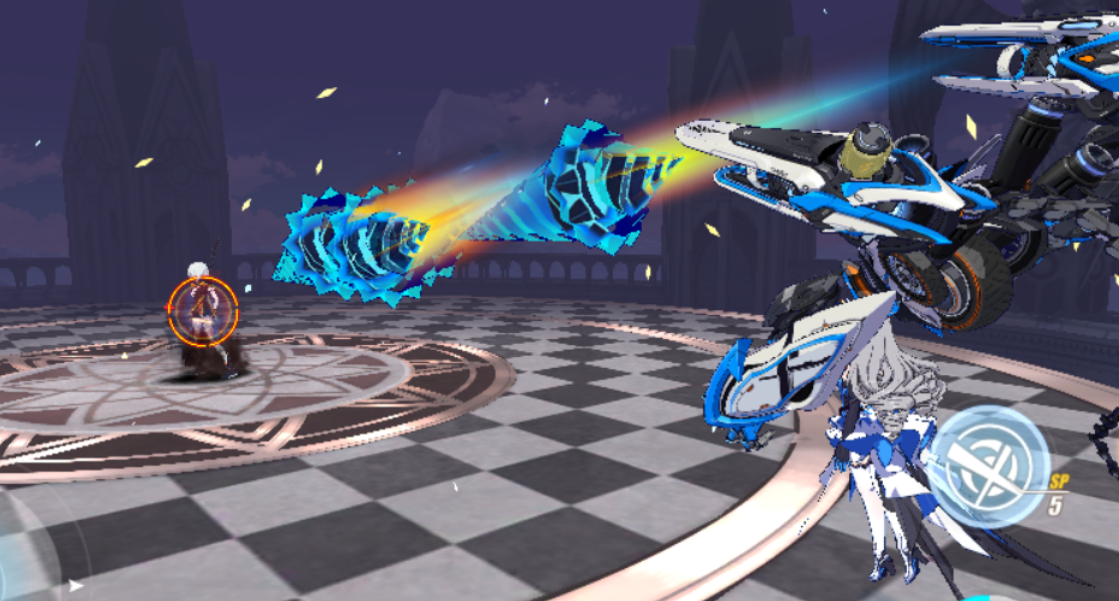 With Missile Launchers, she shoots 12 rounds of small drills onto her target 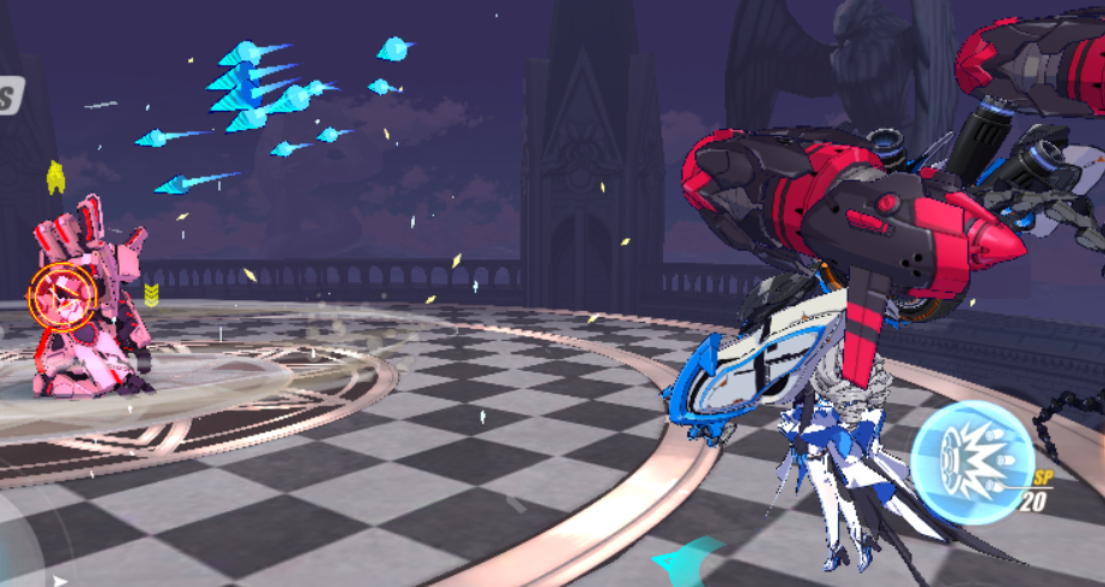 With Lasers, she shoots a multi-hit linear burst, much like RPC's, this damages everything in a line. 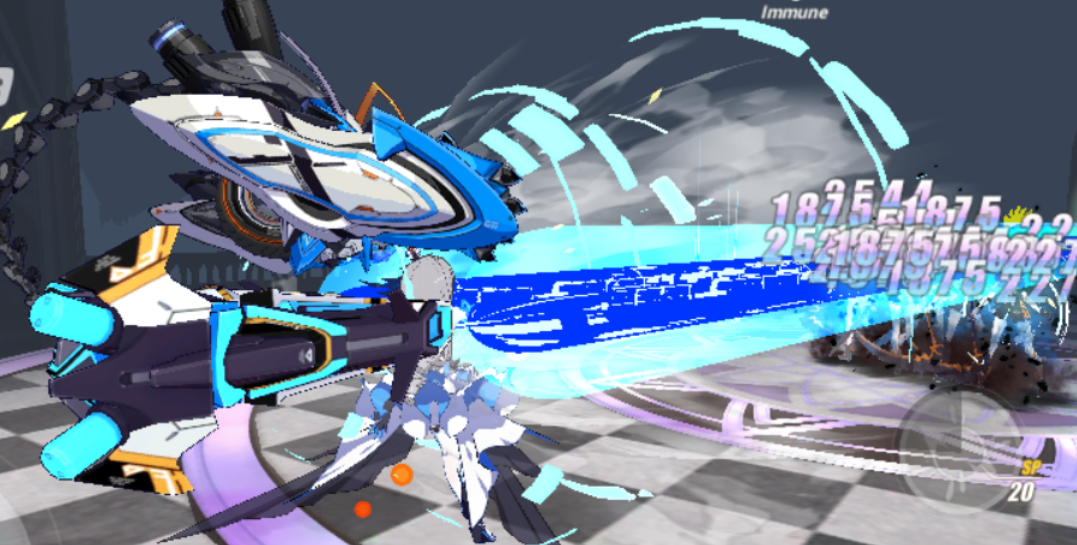 Note that you will always deal the same amount of damage no matter the weapon type, which is 660% ice damage for each shot fired.
Also you don't need to charge anything, as all weapons will fire in their maxed charge state. This changes most weapon's unique mechanic completely:

DEA Raison ends when you don't have enough Konstruktyom or stop shooting, when DEA Raison ends, the next 1st sequence basic attack will push you a bit further onto your target.

Be advised that USAGI Kinetik is not a burst mode.
Notice the background? yes, it is also Herrscher Mode: DEA Raison, meaning [Herrscher of Reason] has 2 ways to enter it.

USAGI Kinetik lasts for 17s and [Herrscher of Reason] has a different gameplay while in it.

While in USAGI Kinetik, [Herrscher of Reason] gains 40 Konstruktyom per second
Moving, attacking, or evading creates a Hover Gun every 0.6s that deals 260% ice damage to your target

The wheelie animation locks you so you cannot turn and you have to aim it manually because it doesn't automatically strike onto your target, you will also go through your target so you will have to reposition every time you do a wheelie, the spin attack, however, will automatically face you towards your target like usual. 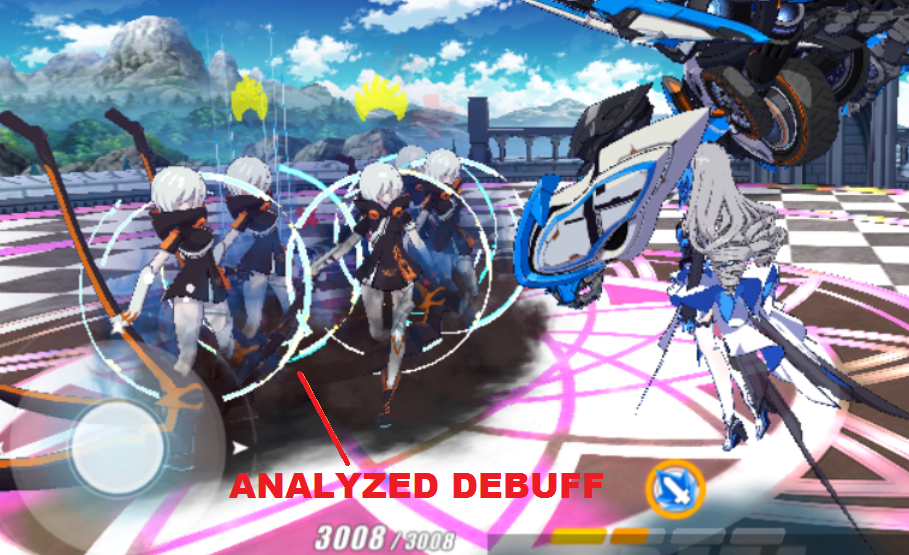 This buff can be refreshed by inflicting another Analyzed debuff, therefore freezing the said enemy for another 1.5s
Okay okay I will summarize it for you, these are the ways for [Herrscher of Reason] to inflict Analyzed debuff:

Ultimate Evasion
Last but not least, we have her Ultimate Evasion
The normal evasion gives her 120 Konstruktyom and it has no cooldown, the ultimate evasion is the global time fracture, which lasts for 3s with a 15s cd.
On SSS rank, the passive Freeze Threshold will be unlocked, reducing the cooldown to 12s and inflicting Analyzed to everything affected by the time fracture for 6s, therefore freezing them as well.

And so we enter the next phase, Team Building

Much like the previous part, team building is centered around the 3 topics.
But, it is very clear with those capabilities, it's not an exaggeration that [Herrscher of Reason] can do well even without teammates.
But still, let's get through them topics, but all at the same time now.

[Herrscher of Reason] contributes 2 things for the team, time lock and freeze
While there are plenty valkyrjas who can benefit off these, there are few who can support an elemental damager, the few are:

While thinking about supporting, someone must fill the role of secondary DPS as well, and there are 3 valkyrjas who can do this:

But those 3 are S ranks!
Sadly, yes, but don't worry, we still have much to discuss.
If you have a Main DPS, determining secondary DPS is less constrained, you don't have to put a secondary DPS that directly supports main DPS

Lightning Empress has always been one of the most favorited support of most captains, being able to provide 50 sp at the start of battle can mean quick use of ultimates and weapon skill to obliterate MA bosses.

Unforgotten Apostle/Goushinnso Memento might not provide any bonuses for [Herrscher of Reason] herself, but she can provide burst damage in a very short time interval, great for increasing overall dps of the team.

Apart from valkyrjas, let's not forget the one thing that has been a friend to elemental damagers for decades, the good ol' Blood Dance

This greatsword provides massive bonus of making enemies take 36% more elemental damage for 9s, at only 15s cd. If you are to bring it, there are 4 users that can also benefit off [Herrscher of Reason]

For me, [Herrscher of Reason]'s team changes according to where she is going to, such as abyss or MA or usual stages.
While you can bring maximum DPS with Blood Dance into MA, bringing defensive support such as WD or Kometa into higher abyss might be wiser.

I would put everything so you can mixmatch her  as usual, but not this time.
She came with her signature set, and for Herrschers, that is a big deal.
Her Signature set is Key of Reason weapon with Welt Yang stigma set

While you can argue about her weapon, Welt Yang is undeniably the best stigma set for her and maybe for all ice valks.

Remember that [Herrscher of Reason] does 14 hits of her non-charged basic attack, so the 2-set effect will be very easy to trigger
Also her ultimate lasts for 17s, a full duration that the 3-set stigma effect can give you. Her spin attack in USAGI Kinetik counts as a charged attack.
The shield from the bottom piece will not break if you get hit while the drill barrier is up.

The weapon, Key of Reason, is a normal cannon that gives 30% ice damage. Its weapon skill deals a total of 1565% ice damage and freezes enemies for 6s, and the wielder gets yet another 35% total damage multiplier for 7s.
When equipped on [Herrscher of Reason], hit enemies also get Analyzed for 7s.
The weapon skill only costs 5sp, with a long cooldown of 25s

If you calculate everything together, Key of Reason is still the best weapon for [Herrscher of Reason] mainly because of the 35% total damage multiplier it gives. But if you can't afford it, Hand of Tyr is the most powerful substitute.

The reason is because its active skill works like a normal charged attack, this can trigger Welt Yang stigma's 2 set effect, as well as making [Herrscher of Reason] enters DEA Raison for the shot.
If that's not enough reason, the damage also gets converted into ice damage, gaining the bonus 110% ice damage from Welt Yang's set

Other than these 2, you can pretty much use anything with big base damage stat, because elemental damage cannot crit. Except that DO NOT (yes, I press this) use laser weapon on her, it's really bad. Also I don't advise to use missile launchers because some of them tend to miss, decreasing your damage output

As for the Stigmata:

Also before this part ends, I would like to make a special mention to the ELF: Selune's Elegy if you really want to maximize [Herrscher of Reason]'s damage. Her ultimate makes an area which increases ice damage taken by 5%

Yes, the number is small, but if you're maximizing damage no matter the cost, I don't see why not 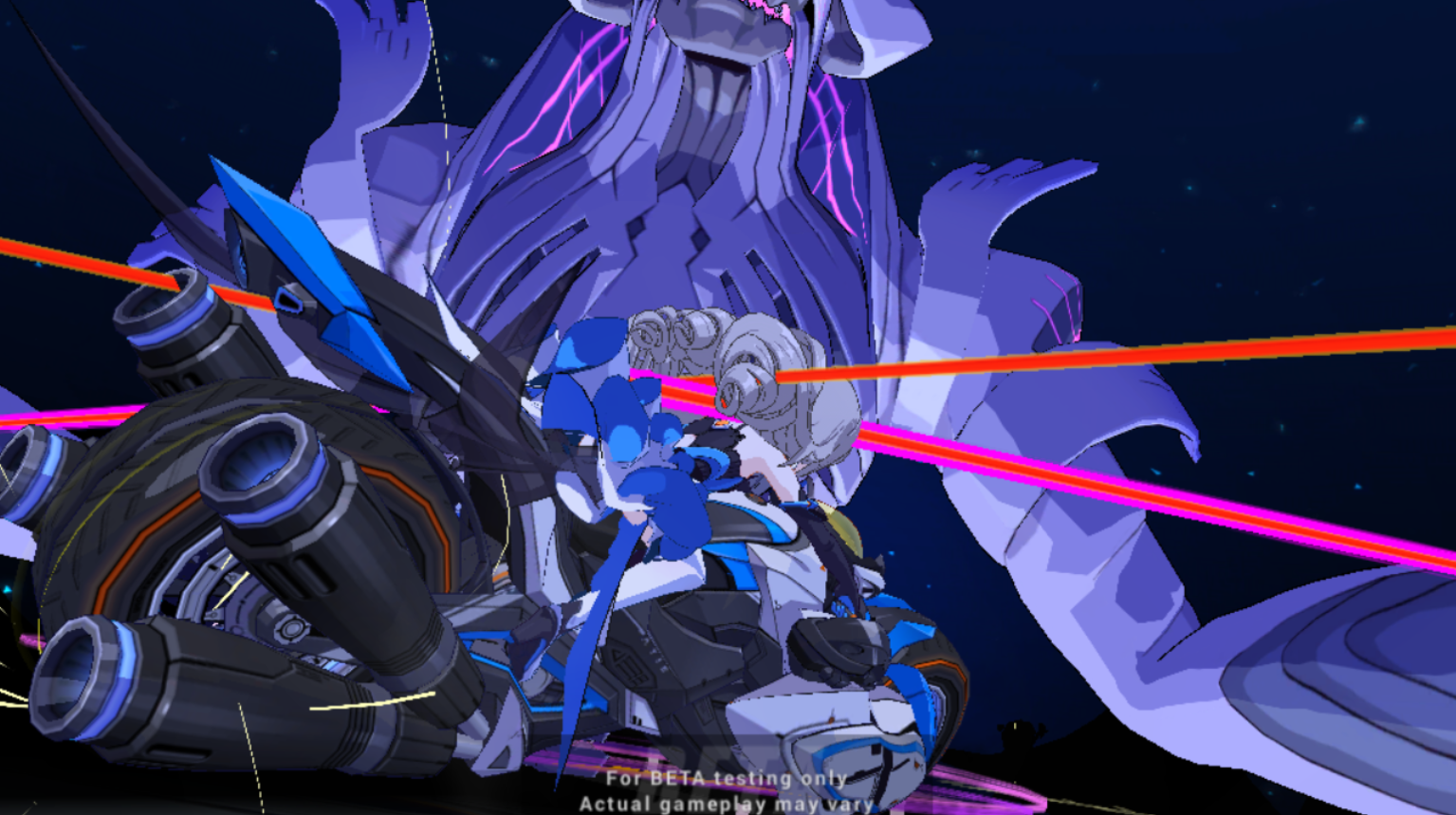