Greetings, fellow captains! Captain Rinka here, and we have just entered the all new v3.3 update of Honkai Impact 3!

This means more things to do, isn't it?
Yes! and I'm here to guide you into it, and possibly prevent you from being lost in thoughts, nothing to do while poking those valkyrja chibis in the dorm nonstop.
I know most of you do it regularly.

Anyway, I'll do my best to cover most new things that I know of, including some not-too-deep researches and hopefully "brief" explanations about them.

Please do mind that some parts of the guide will be solely my opinion, it might go wrong in the near future or doesn't suit your playstyle.
I'm also testing all the stuff in Beta Server, so things might change in Live Version.
I tell this early on, you do not have to follow everything my guide presents to you, stick to your playstyle and what feels the best for you, we all know people have different styles and likings.

Lastly, before I go and commit the sins of grammar errors and misspellings, which I usually do, I do apologize since English is not my first language

Phew, I hope that wall of text didn't scare you off already, I don't usually do walls..

Let's break through then!

V3.3 brings many new contents - for us, and  it's very fresh! I'm sure it's going to make you feel like new!
Like, remember those times when Mei still has many lines? Yes... good times indeed...

Don't lie to me, I know most of you relate to this

Now, ignoring the facts that hired agents will come after me soon enough...
I'll list the topics here so that you can jump to whichever you want to see first:

Yes, yes, you can just scroll through everything and find HoR first, she's the star of the v3.3 hype anyway so I won't complain.

No more witty comments then, let's start the guide! 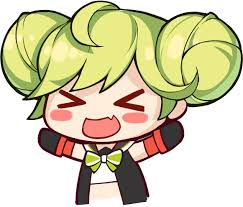 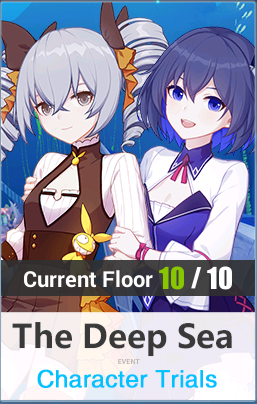 The new captain's challenge is back with one new batch of stages, this time, it's the orphanage's turn. 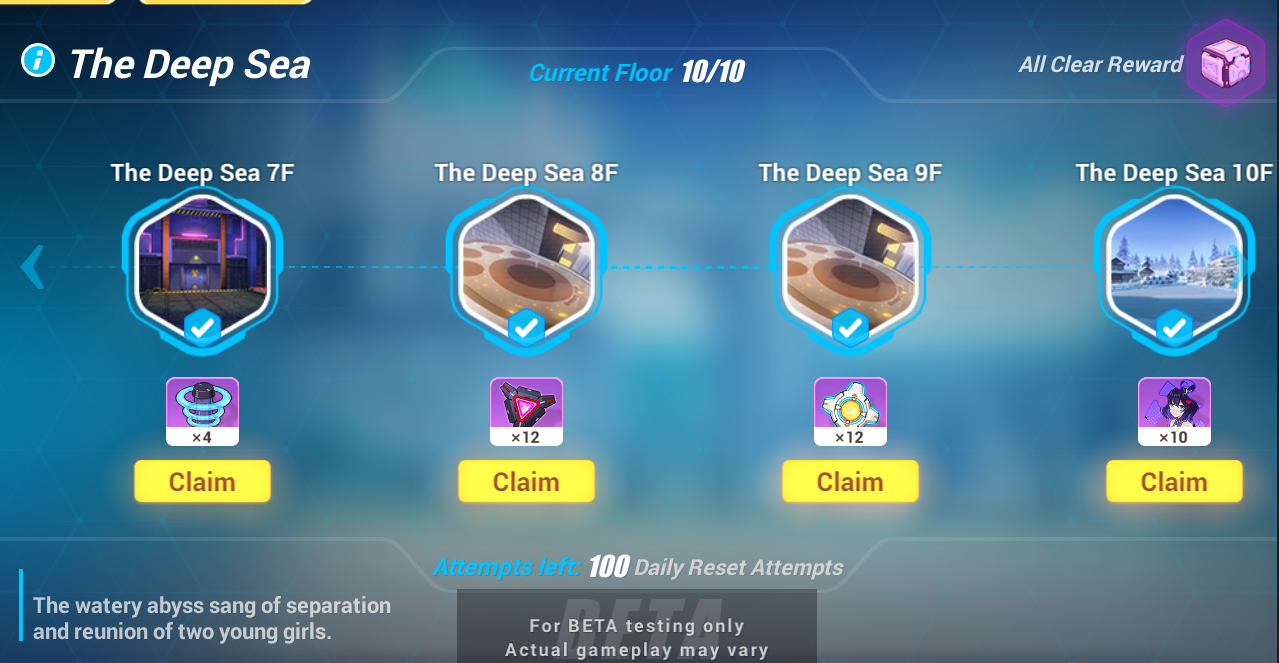 The chapter consists of the usual 10 stages with 1 entry per day, and generous rewards of a total 32 SS and 22 AE imaginons, 4 of each purple upgrade materials, 8 advanced skill material, 10 swallowtail fragment, and a final prize of 1 focused supply card. 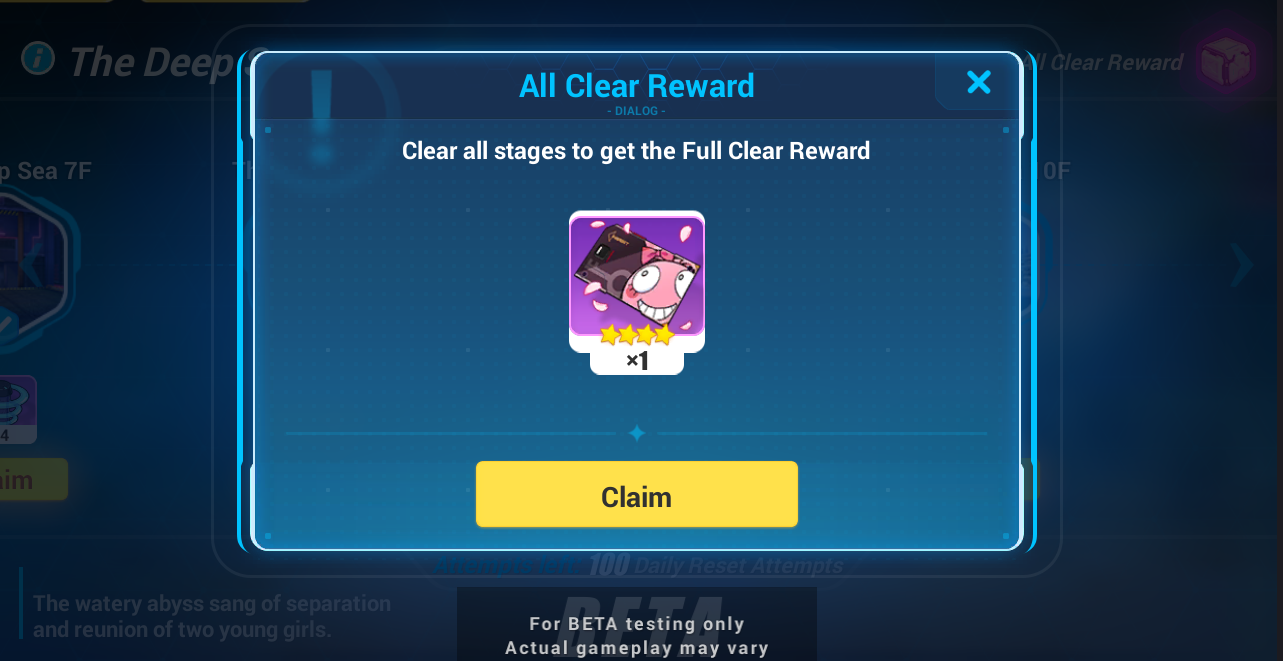 While the stage itself won't be a problem to veteran captains, newer captains might find it hard to clear this chapter because only Bronya, Seele, Liliya, and Rozaliya battlesuits are allowed.

The overall fight is fun and some stages really need some plannings beforehand
On a certain "positive" note, you get to meet with the Umbral Rose boss again!

First of all, no, I'm not doing in-depth guide for these new bosses, I was never an expert in MA so I'll leave it to another arena-specific guides, I'll just introduce you to these new meta maker guys.

Cut to the chase, we have 3 new bosses 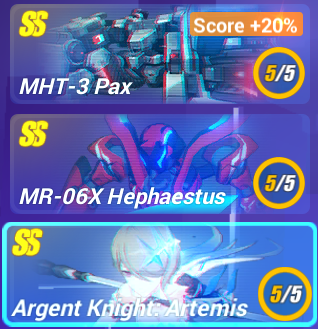 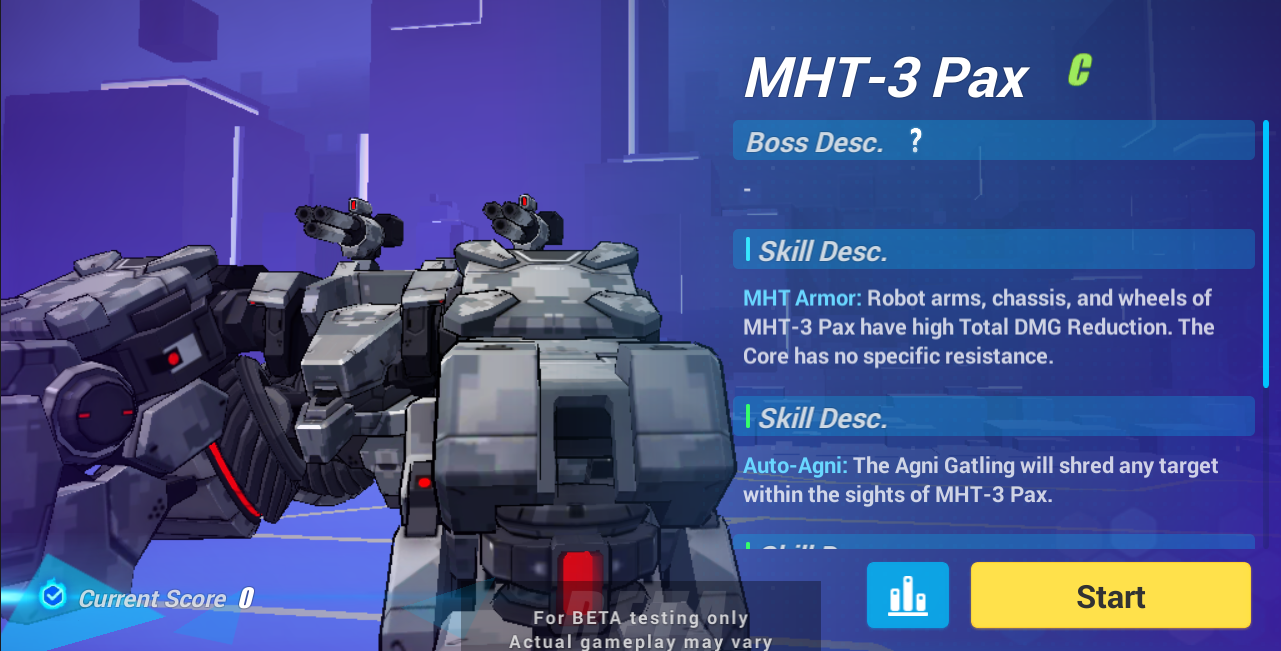 As the description says, it has high Total Damage Reduction on everywhere other than its core, and it's located between the 2 arms, he shoots lasers from the core as well so hit it with care. 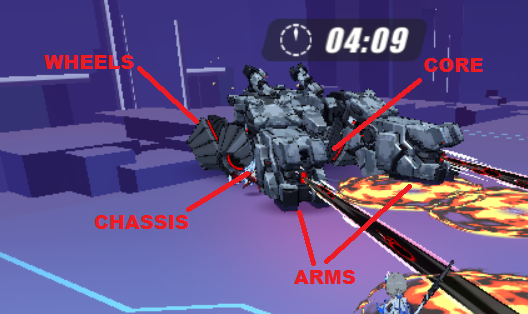 At higher difficulty, the core won't be accessible for the first bar of its HP, though “mark-exploding” attacks will automatically hit the core, namely Miko, Rondo, Sixth Serenade, Argent Knight, and Cinder Hawk gauntlet's passive.

Cool point though, this boss has a literal nuke, which is awesome, unless you didn't evade it and get killed instantly.

Next, we have the buffed up version of Baldur, the MR-06X Hephaestus 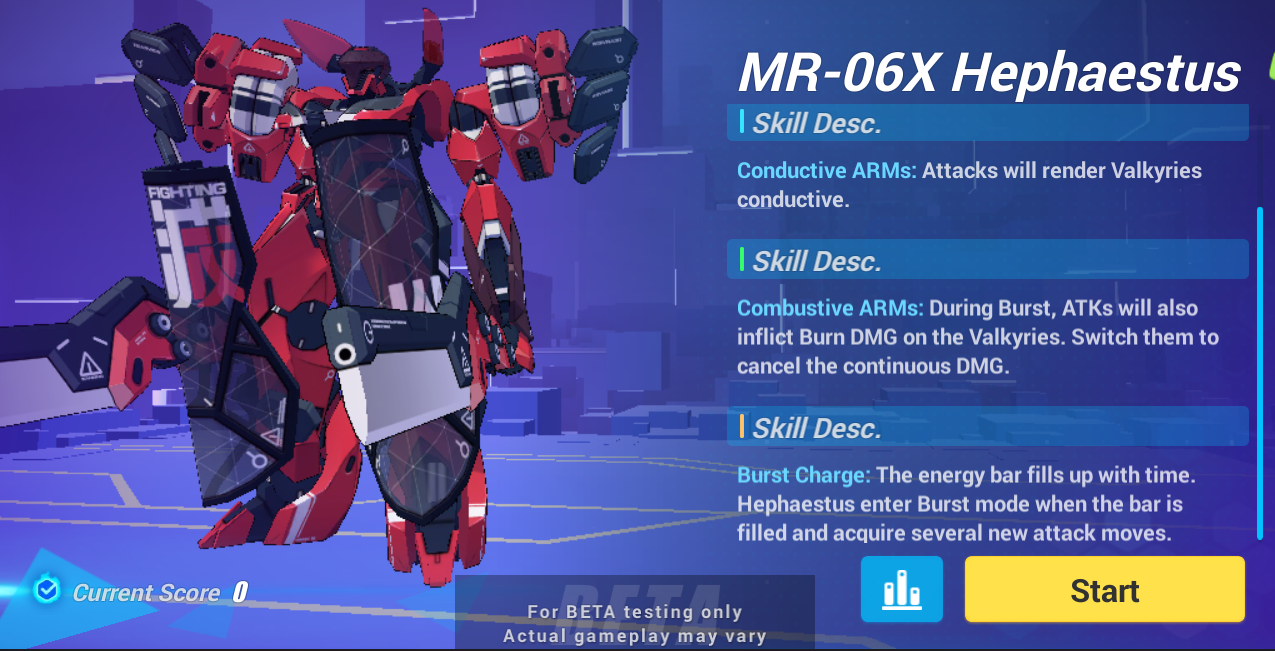 This boss' main problem is that it summons 2 (4 in higher difficulty) cogs that will make valks unable to switch in, the cogs also aggro your ELF, making them attack cogs first. The cogs can be destroyed, but he will periodically explodes and resummons them either way.

This boss has a burst meter that fills up with time, once it reaches full, the boss will enter burst mode, adding new attack patterns and inflicting ignite every hit 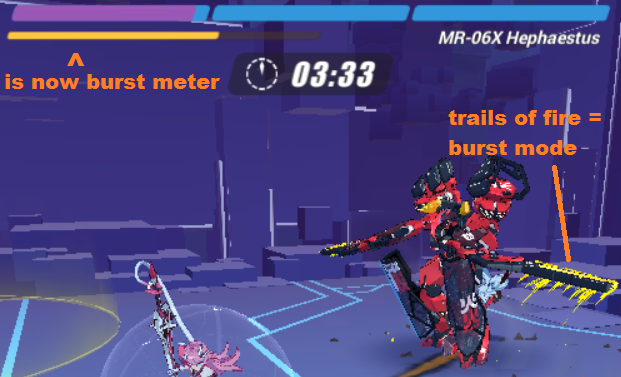 He will leave burst mode after his meter is depleted, note that you cannot reduce the meter yourself by any means. 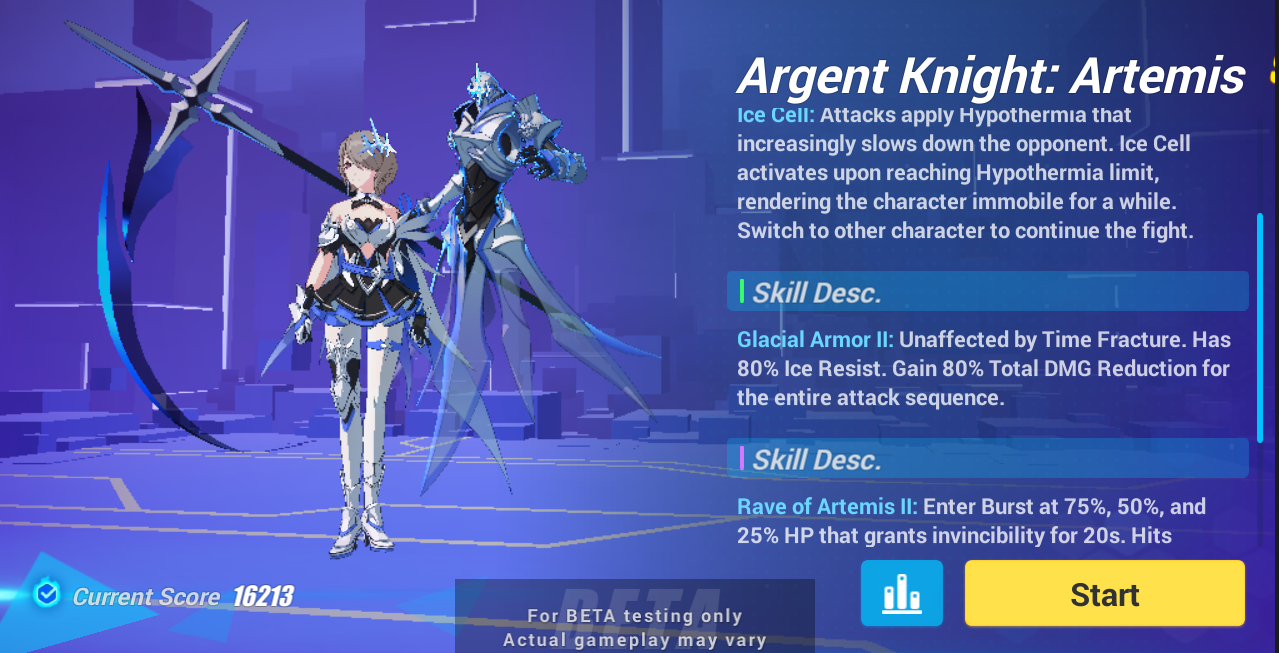 Although the fight is very straightforward, one of her notable mechanic is the hypothermia aura which she periodically activates if you stray too far from her.
The aura lingers for some time, giving you steady amount of hypothermia every second, and they stack, meaning you get double the speed if you step on two of them.

Stray too far and she will charge up, teleport to you, and do a wide-range sickle sweep, dealing massive damage and creating a massive hypothermia aura which lasts longer, forcing you to run from it only to find that you're far enough to make her do the sweep again, it's a demonic loop.

Additional note, if you get hit by her, hypothermia bar will always increase even if you take no damage (e.g. VK's invincible frame with ultimate)

On top of that, she has no elite shield, resists time fracture, very high amount of HP, defense, ice dmg resist, and total damage reductions in almost all of her animations, making her the hardest MA boss up to date. Believe it or not...

This maid has no chill man

And that's it for the MA bosses, also for additional note, the MA solo rewards will not be based on the score anymore, but instead challenge times, with a max of 10 for all rewards

Good news for you gacha rollers who just have bad streak of luck and has tons of duplicate weapons, you can now trade it for other gacha weapon!
You can find this feature in the Equipment > Salvage (bottom right side) > Convert tab 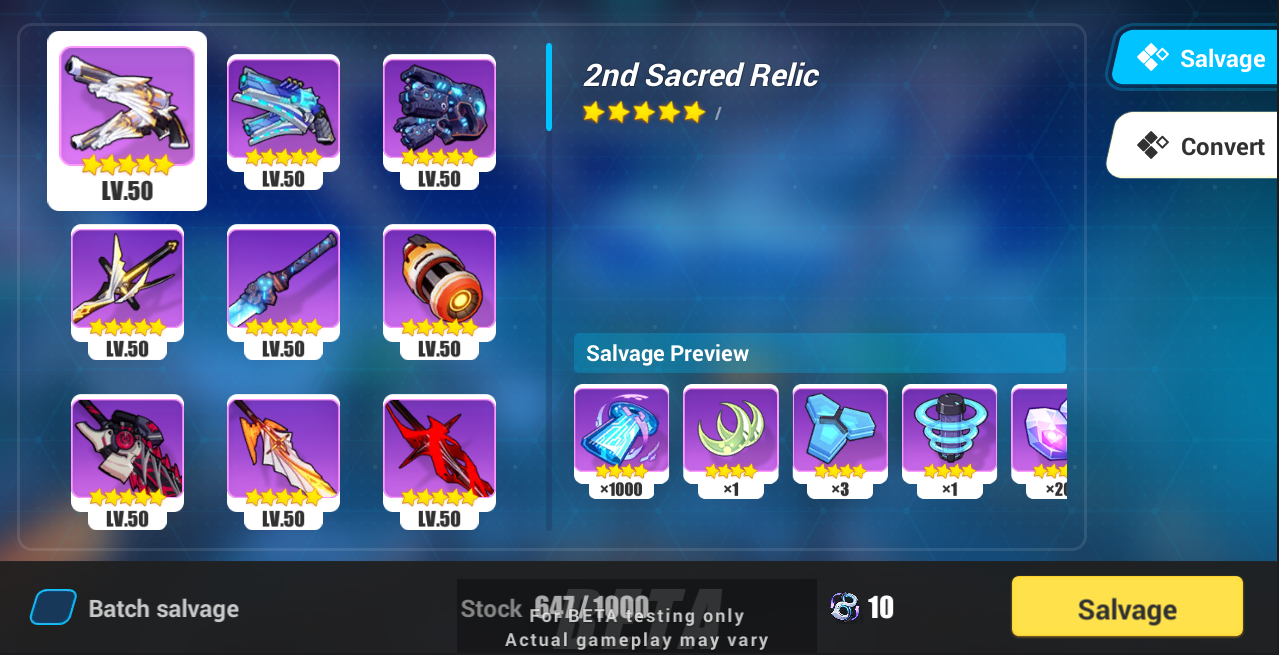 Before you convert anything into weapon resonators, you will need this item

called Reson-convert
It is obtainable in the Asterite shop for 2000 Asterites for 10 Reson, and you will need 10 Reson for each weapon you convert.
You get 1000 Weapon Resonator for each gacha weapon you convert, note that it's only for gacha weapon, so weapons that you can buy with AE imaginons are not counted.

You can only buy Reson 4 times for this event, not counting the Honkai Crystal exchange event
But, it means that you can only buy gacha weapon with weapon resonators a limited time.
The exchangeable weapons are as follows : 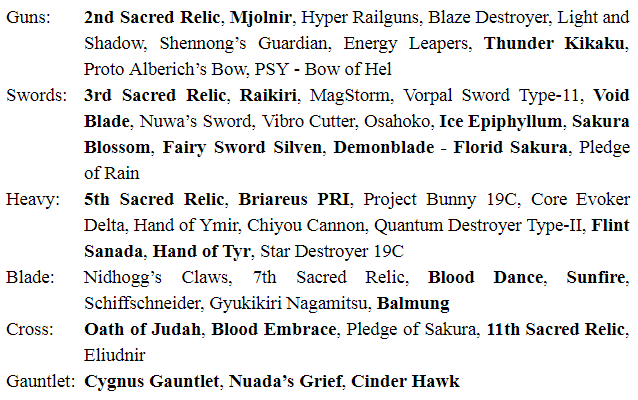 I marked important ones, so you know what to aim for, since you can only buy them once per version update, and only 2 of them appear every reset.
Good news is, the manual shuffle now costs 1000 Asterites instead of 100 Crystals, so have fun reshuffling !

Yes, our little ELFs got some new talents with the coming of the new Talengem X

No don't ask me why GP Talengem is blue and X is red or I shall start the rose and violet meme, again.

You can buy the talengem 5 times weekly, or you can get it through the new Soul Throne co-op raid called Ashura's Throne.

There are 7 new talents divided into 2 - 2 - 3 for Combat, General, and Technique tabs, and they all open at Bank score of 10, meaning you will have to upgrade most of the non-rare talents to level 5 before you can access rare ones.
Each rare talent costs 7 Talengem X and 10 GP Talengem, and they only have 1 level, which is an upgrade to the talent with the same effect.

Overall, this is a nice buff and grindfest for the Blood Embrace ELF, as she will need the new rare talents.

Another good news for you dorm lurker, we have 3 new chibis ready to move in, you just have to unlock them first 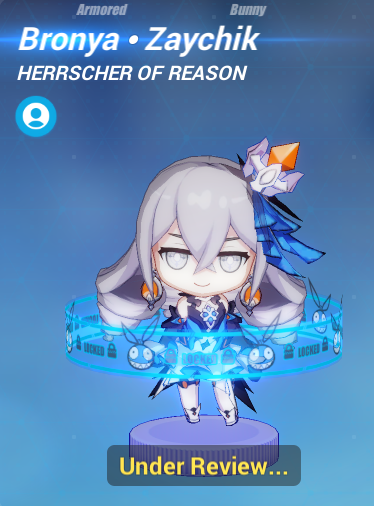 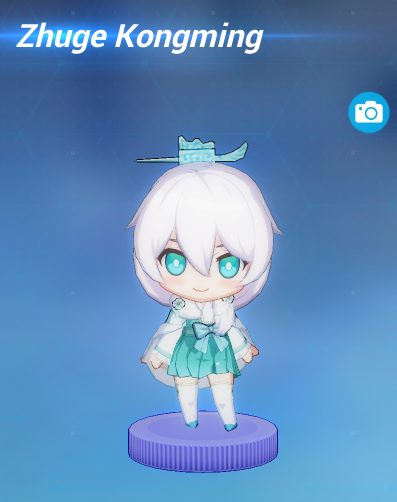 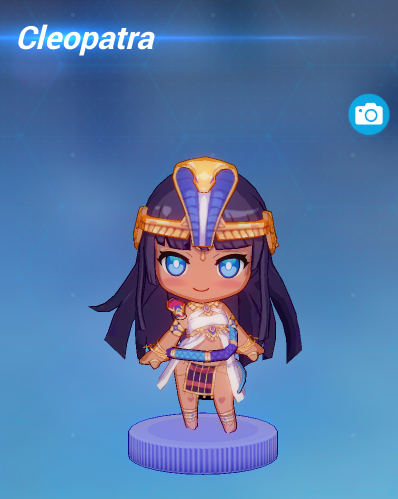 There are also new dorm events for the new chibis, make sure to find them all out ! 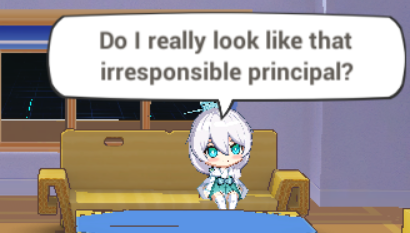 No no, having 50 IQ doesn't have anything to do with being irresponsible

You expected valkyrja guide? Too bad, because..

You smell it Rin? The smell of someone getting bamboolzed
No no, don't aim that thing on me, don't throw anything on your screen either.

Jokes aside, I put the parts for them in separate guides, as it will be too long if I put them together with this.
You yourself won't bother reading a 63 page worth of guide, will you?

So, yeah, make sure to search for them as well! I'm sure it will make you smarter in some way

Or you can jump in from here: HoR, VD.

I should've put a page joke here, but I'll let you calm down first
Among all the issue fixing and gameplay smoothing, also stigma changes and weapon buffs, I will discuss the ones that have the most impact to the game.

Starting from the buff for the Sen-ki Dashing Tern move for Phoenix battlesuit, triggering the move after ultimate evasion now has longer window.
What does this mean? Well, usually this doesn't mean much…
But, credits for youtube channel Just3c, he figured out how good this is in action!

Sen-ki Dashing Tern is Phoenix's “Dive Kick”  move that you do when you press AAABB, you can also do this move by pressing B after an evasion.

This move is her bread and butter, being able to counter everytime she dodges, it's very noticeable if you use her against Heimdall boss.
But, with the trigger window buff, she can now do what Just3c calls as “The Forbidden Technique” a.k.a. The Double Dive.

Voila! She can do 2 dives in one evasion! This ramps up her damage output and counter capability.
Although it looks awesome, it is hard to use without practice, let alone using it in battle

To use this move, first thing, you have to only tap the evasion button once. Doing 2 evasions will destroy your chance to use it, so patience is the key.
Next, use the Dive before she finishes her evasion motion, this means press B right after you trigger an evasion.
Then, cancel the dive motion by pressing evasion again, this is the hard part, the window is still small so this is the place where you will likely rekt it up, either being late or wrong button press.
Finally just press the B button again and there you have it, the Forbidden Technique!

Remember that practice is the key, fellow Phoenixes, now train and dive into glory

Next up, there is an ATK stat increase to the valkyrjas:
Sin Hunter, Gyakushinn Miko, Molotov Cherry, Shadow Knight, Argent Knight: Artemis, Umbral Rose, Luna Kindred, and Valkyrie Ranger.
Out of them all, Valkyrie Ranger received a whooping 99 base damage increase, that's about the same amount as upgrading 4* weapon into 5* !

There are many buffs to the existing 3* weapons, I would list them all here but you still won't use some of those, so I'll list the best changes only.

2 set when no more than 2 enemies, team receives 10% less indirect damage
3 set when exiting, next valkyrja switching in gain 20% def for 10s

Aand we're done! Thank you for being with this guide until the end!

Captain Rinka here signing out, I hope to see you again in the next guide! 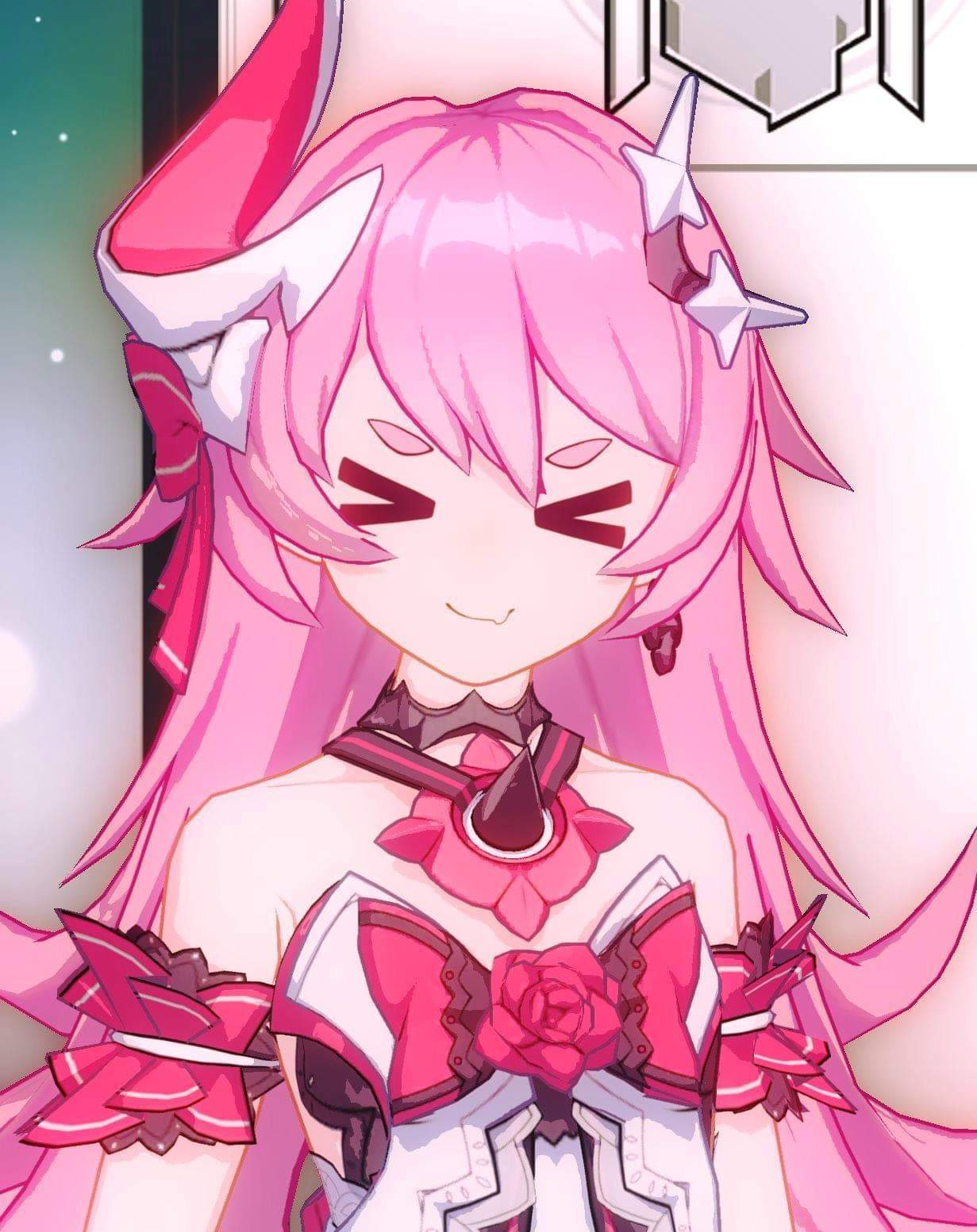 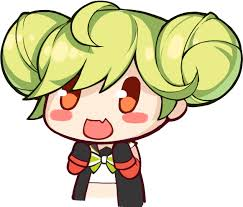 As for the last part, I would like to first thank MiHoYo for the chance of being one of the v3.3 beta testers, as I wouldn't even make this guide if it's not for them and this chance.

I also want to thank fellow beta testers who have shared and helped me either directly or indirectly.

I want to also thank my armada, Axilia, and every one of its members for keeping me company until late midnights and keeping my spirit high to continue this, one sure long guide, you guys are the best
Oh and while I'm at it, come join us and have a blast!

Also special thanks to the youtube channels that I keep on track, namely Just3c, Honkai 3rd Guy, and Songwut Sriwattana  for always giving me awesome information.

Lastly, I credit the valkyrja and AI Chan images to the Honkai wiki and MiHoYo artists.