A Beginners' Valkyrie Guide by Stroke 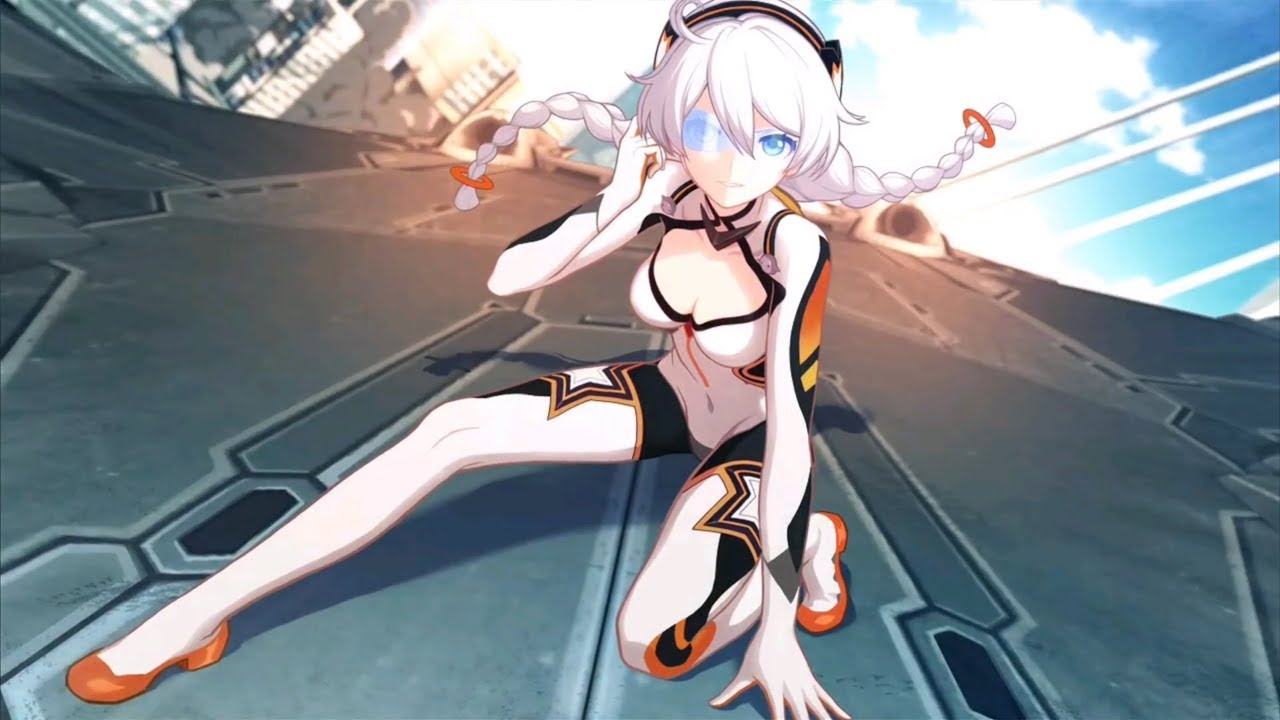 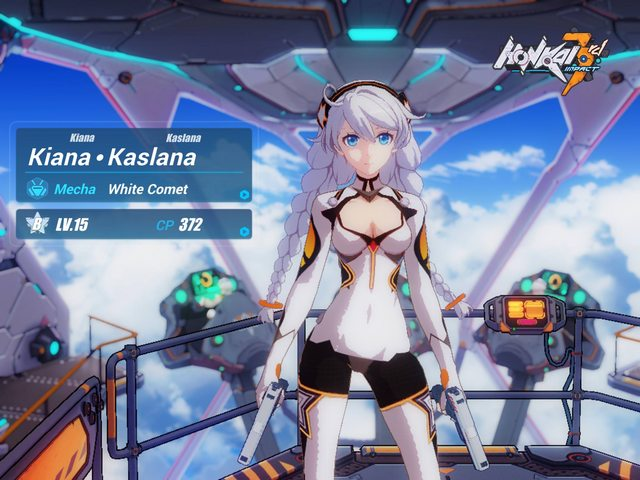 The guide is geared towards beginners who might be overwhelmed with all the intricacies introduced with each valkyrie. The first valkyrie we are introduced to is White Comet (WC), and she is a great model to learn with. We will go over how to unlock higher ranks for valkyries and the different mechanisms available to valkyries.

White Comet is a farmable B-Rank Mecha valkyrie. This means she can be farmed by collecting addition fragments, usually found in story mode stages and open world tasks. Here is the required number fragments for White Comet:

To rank from SS to SSS: 200 fragments 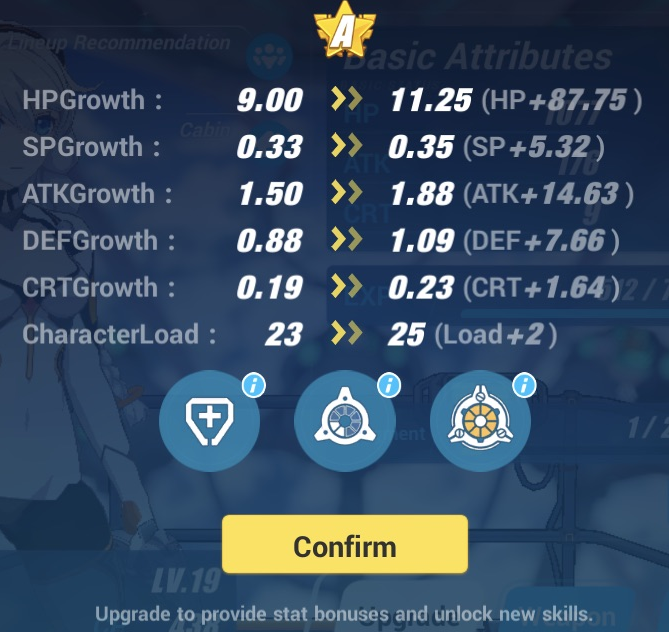 Now that we know the numbers, let us go over the benefits of ranking up a valkyrie.

Each rank up will have two types of advantages. Firstly, there will be a stat increase for each rank increase and this will be one of the main ways to increase a valkyrie's attack. This will be crucial going forward for any damage dealer.

Secondly, higher ranks unlock more skills that will give a valkyrie more powers to use in combat. While all valkyries get stat buffs, some valkyries gain more important skills than others with rank, and those should be prioritized.

Every Valkyrie has a leader skill that activates if they are the first valkyrie on the team. For example, if WC is the leader, your whole team will be granted bonus HP. This is great for new players who wants a little more time to get a handle of the combat system.

In almost all cases, it is much better to have offensive skills than defense skills. As you get better at the game, you should rarely get hit in fights. Also, as you kill the enemies faster, that also increases your survival, as dead enemies cannot attack.

There are times when a valkyrie is only used for her leader skill. Take Lightning Empress(LE) for example, she has the insanely overpowered ability to make the whole team start at 50 sp, allowing for quick weapon skills and ultimates.

Often times, a valkyrie's passives are what defines the valkyrie. There are many valkyries with special unique mechanics. For example, Gyakushinn Miko (Miko) has the special debuffs called Sakura Brand and Sakura Counts that heavily impacts her playstyle and damage output.

Other times, passives also grant strong bonuses when a requirement is met. Perhaps a valkyrie will deal more damage to paralyzed targets, or increase their damage when their HP is under a certain threshold.

For WC, she deals 50% more damage against shields and gains 40% more crit damage while HP is above 80%.

One of the most fundamental parts of Honkai's combat system is evasion. There are three terms I would like to get newer players acquainted with, especially because due to inconsistent wording, many players will confuse them or think of them as the same.

First is evading. Each valkyrie has their own animation, ranging from doing cartwheels (like WC), to blocking attacks, to teleporting. Evading also has its own unstated cooldown. You will find some valkyries can evade twice in quick succession while others cannot. Understanding how quickly and how often they can evade will be key to playing that valkyrie well.

There are a few game strategies and gears that are built around successful ultimate evasions, a couple of examples are Zorro set and Darwin B.

One additional note: It is important to know that certain attack patterns from certain enemies will NOT trigger your ultimate evasion skill even after a successful evasion. For example, a lot of the ninja zombie monster attacks will not work.

Basic attacks is what a valkyrie will be doing most of the time in combat. It is often smart to pay attention to its attack pattern to see where are the hard hitting hits. Another factor to look for is if there is any instance where the attack is particularly slow or long backswings, leaving the valkyrie vulnerable to counter attacks. From these observations you can decide if you want to use evade to cancel an animation or attack pattern.

Luckily WC's attack pattern is fairly straight forward. You will also quickly notice that despite using guns, her attacks is a combination of melee and ranged attacks. There are some stigmatas that specify ranged or melee attacks, since WC has both types, stigmatas that specify one over the other will not be optimal. It is important to note we cannot assume range/melee from weapon type alone.

The valkyrie's ultimate is what they spend their SP on and is an important part of a valkyrie's gameplay. For WC, she goes into a burst mode that changes her attack pattern to have higher range and more defensive capabilities while fighting.

It is important to note that since WC's attack pattern is being altered, it no longer counts as a basic attack. There are many gears that specify basic attack as a condition and they will not be able to affect WC while in burst mode. The text above are two good examples: the first improves the valkyrie's physical damage by 41%, while the second improves the valkyrie's basic attacks' physical damage 51%. Therefore, it is important to prioritize gears without the "basic attack" requirement if a large source of damage comes from a valkyrie's burst mode.

WC has a combo attack. You can chain to it after her second basic attack by holding down the attack button. By doing so, WC will kick her target into the air, applying the float status which can trigger QTE's of other valkyries.

After you discover a new valkyrie and understand her mechanics, it is important to think about where she can fit in your team or if she can fit into your team. There are few things to consider. That does a valkyrie truly need?

First, does her leader skill warrant her a place as lead? As we talked about before, defensive leader skills are far less desirable than offensive ones. I will say no on this regard.

Second, can she be used as a primary or secondary damage dealer? Let us see what multipliers she brings to the table. I will compare WC with another B ranked valkyrie: Valkyrie Chariot (VC).

As we can see, WC's multipliers are severely lacking, a lot of WC's skills affect only 1 hit or is a flat number rather than a scaling percentage increase. Also, WC has under average attack stats and poor damage potential with said basic and combo attacks. Her burst mode does nothing to remedy this either. We can cross her out as damage dealer.

Next, we look at if she can play as a support. Supports have to be able to positively benefit her teammate in some way. Unfortunately, most of her skills do not have any effect on her teammates, besides the evasion skill: Temporal Flow. Having an ultimate evasion skill that provides global time fracture is also very valuable in Memorial Arena (MA). Giving the team +7 SP (because ultimate evasion on its own provides +2 SP for the team) every ultimate evasion skill is valuable. A niche team using WC could be YA, WC, and NS. Another good point is that she is able to inflict float, time fracture, and stun through her kit. This can make her a viable teammate to valkyries that can abuse those statuses.

Finally, we look if they are gears that standout and enhance her strengths. In terms of damage dealing, unfortunately that is a lost cause. However, there are a lot of universal support stigmatas that can be used by any valkyrie which will work well on WC. Furthermore, since we said one of her strong points is her ultimate evasion skill, you can also incorporate ultimate evasion skill reduction stigmatas to further strengthen that point. Being a pistol weapon type also means she is able to make use of the multitude of strong pistols in the game including Mjolnir and Judgement of Shamash.

Overall, White Comet is a very weak valkyrie. In most cases, WC will eventually be switched out for stronger valkyries as you get them. However, she still has access to a lot of statuses with her skill kit and her weapon type. Her ultimate evasion skill is definitely the most competitively viable part of the valkyrie. However, what I really wanted to introduce is the analysis process of a new valkyrie. How can we find suitable stigmatas to match a valkyrie's kit. How can we take advantage of her strengths, and hopefully by the end, we have gotten a clearer idea of these concepts.