*Note that this is not 100% accurate, this is just some personal recommendations and advices, for questions or more information you can ask to Top players or Boomer captains through Hi3's official discord 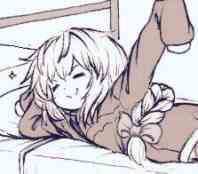 So let's start with our new waif...ehem S-rank valkyrie.

Fallen Rosemary is the new S rank LONG HAIR Rita battlesuit of this new patch. She's half support half dps (like AE or PX) with tons of buffs for her teammates but also with an actual nuke as Ultimate. First of all, FR will NOT be gacha only, you can actually farm her through War Treasury with Acient Willpowers(600) and the new mat: Acient (Teri)Heritage(600).

Also her gear will be exchangeable in the new Elite's Work with a price of 12 purple lucions/6k stig. resonators for a stigma piece and 4k weap. resonators for the BiS weapon. About the weapon, nothing to say, signature weapons are very important for any character nowadays, about her stigmas, Irene-chan set seems pretty good for any elemental support. I, for example, will use Irene on AE. I don't have Margrave because I'm poor.
Order for the gear: Weapon=Irene-chan B > Irene-chan T > Irene-chan M 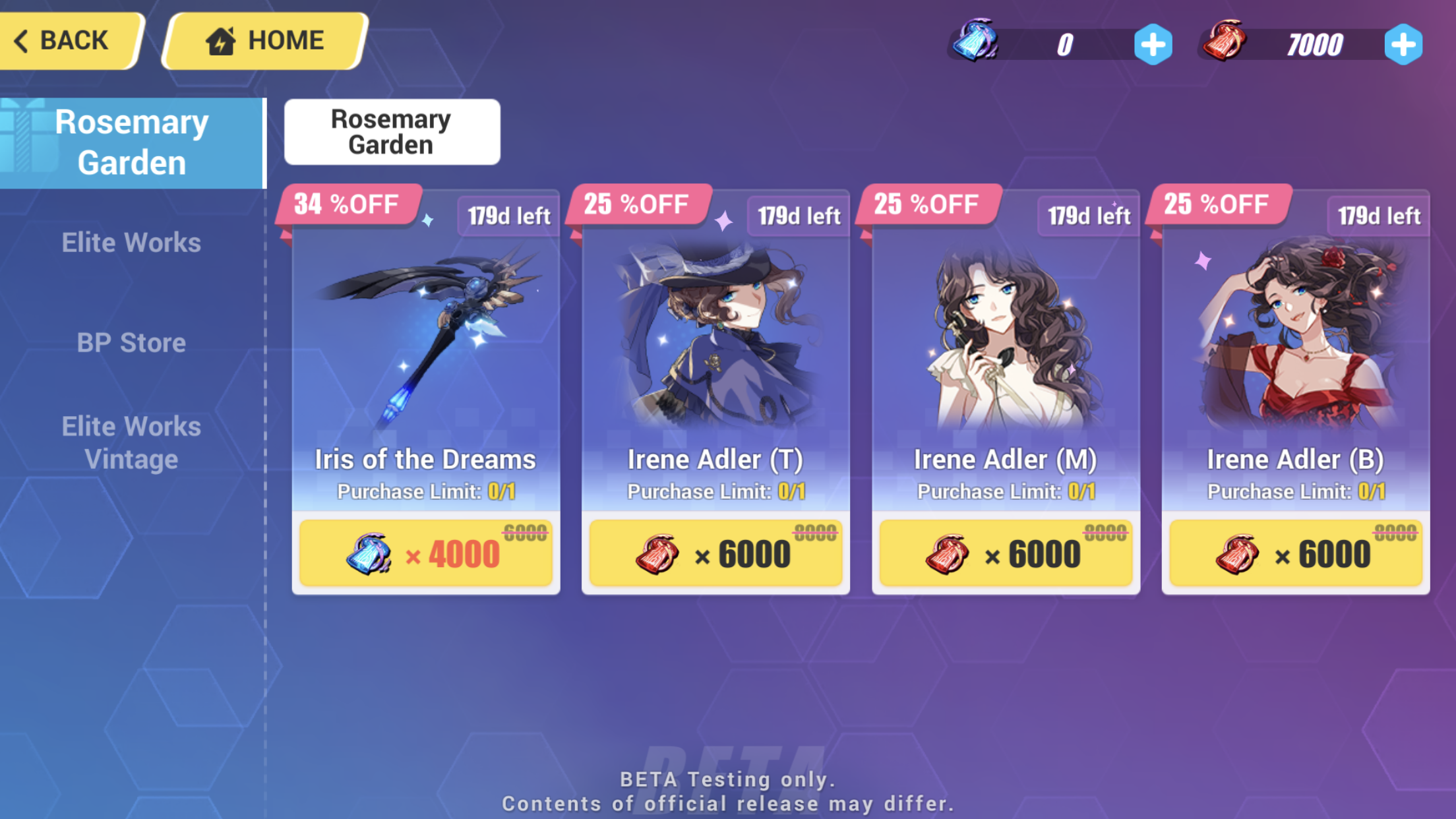 Now, FR is not a mandatory in global, so you have other priorities like SS PX, SS TP, etc. Also FR becomes strong at SS rank, and that's veeeery hard to farm. Compared to S rank FR, BD with JST TM is already pretty good. Between, it seems that in v4.3 we have Roza aug...

IMPORTANT: Don't buy Acient Heritage unless you really need them; 10 Heritage costs 20 Willpower, but you can't buy Willpower with Heritage, also Willpower is needed for other S ranks, Heritage is only for FR.

Of course, if you want her waifu purposes, she's Top 1 priority. ╮(￣▽￣"")╭ 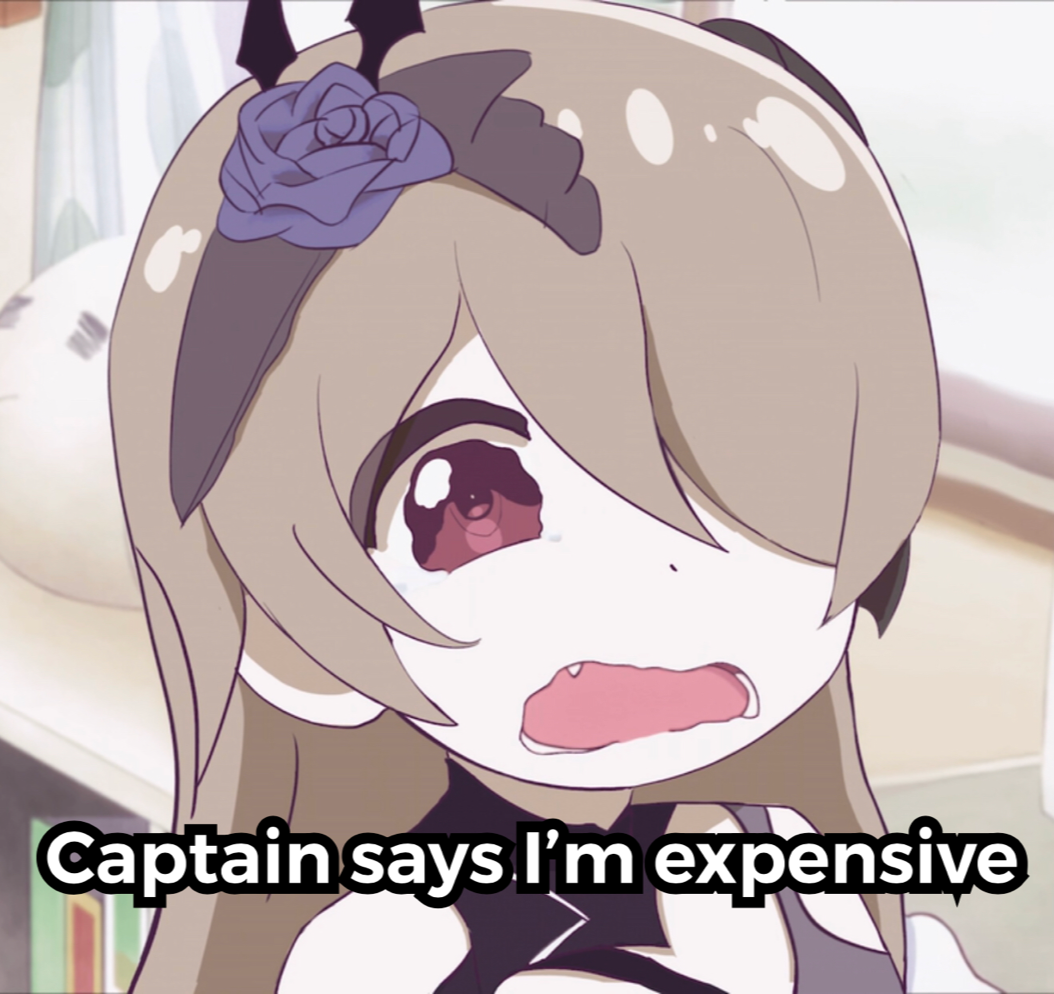 Danzai Spectramancer is the new A rank augment core we will get in v4.2, personally I call it "Battery saver mode HoT". She seems to be more like a support than a DPS, due to that her performance as DPS is pretty mediocre, however in BKE teams, she has almost the same performance as CH as a support. 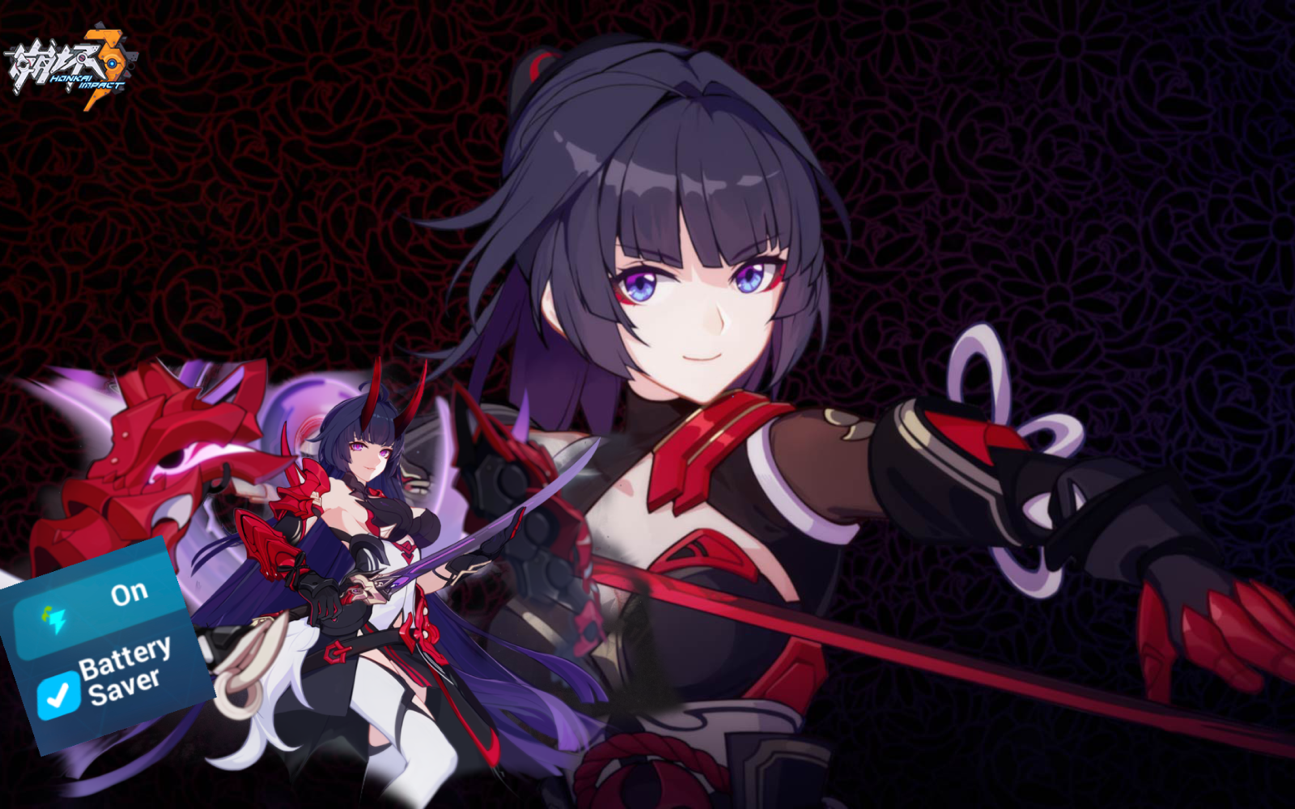 Now in DS's case, the things are pretty funny. She came out without her signature gear, Liebig and Nue of the Shadows's release got delayed to 4.3.

I recommend to keep farming SD fragments but not upgrading her augment core for now, because we still have to wait till her signature gears to come out to see how strong she really is; also in v4.3 we're getting a new S rank augment battlesuit, so don't rush if you don't have enough Smelted Cores.

In v4.2 we're getting a brand new forging system, with some of the actual T1 stigmas added, like Mich TB, Monet T or Peary. 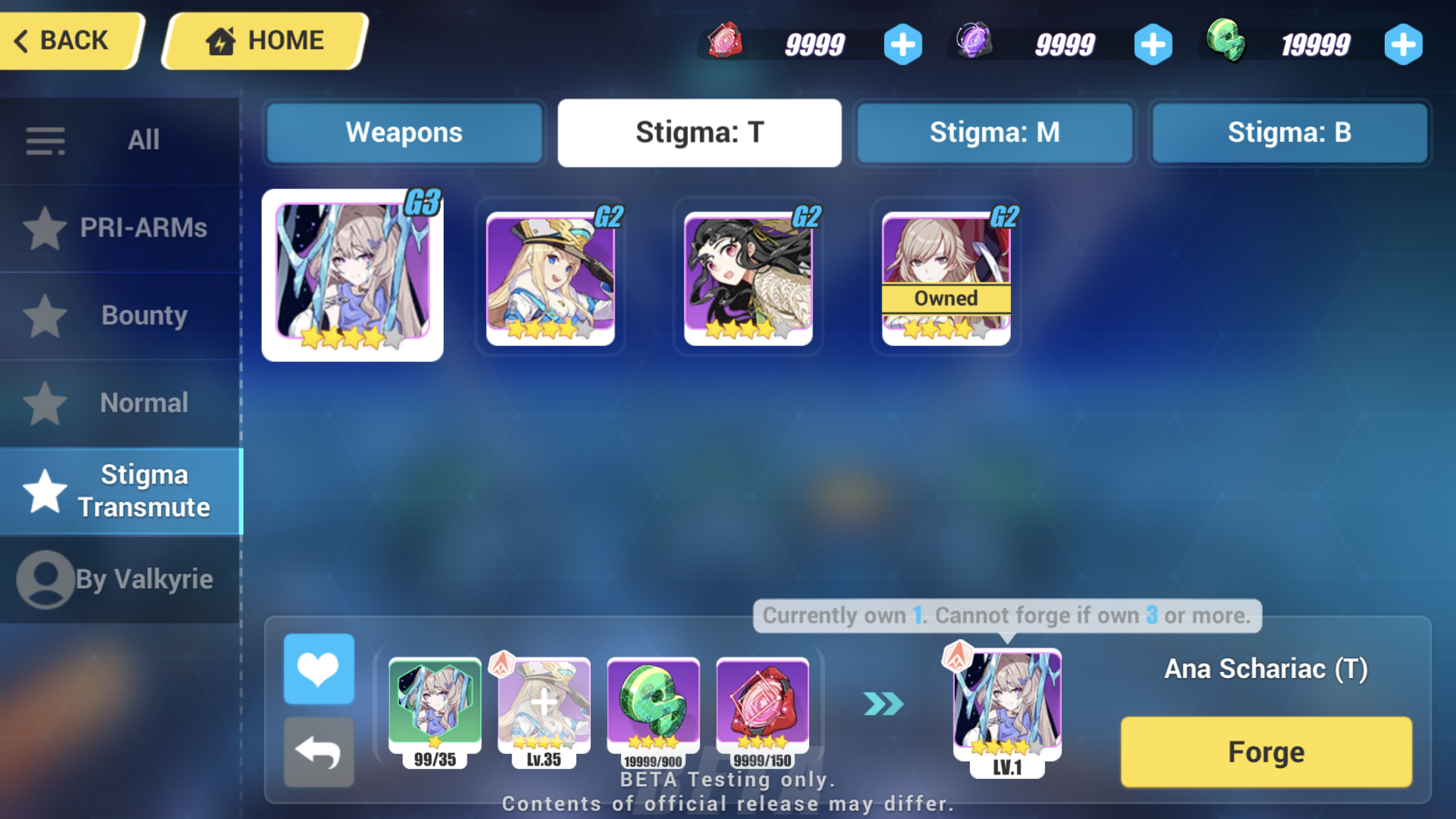 The most juicy part in this new system is the Herrscher of Ice set or Ana Schariac stigmas, this set has very strong multipliers for melee ice DPS valkyries like AKA, but she's also very good on HoR if you can maintain a close range in battle (almost as good as Welt set).

Now, the thing that we all are caring about: how much does those new stigmas cost?

The new forging system is also coming with the new SS rank tasks, various events and free bundles to help us farm faster. In average you can get the first piece of Ana Schariac in one or two weeks if you already have Peary.

The priority order for Ana set is: Ana T > Ana B > Ana M. However she really needs full set to be strong.

4. Bounty Event
In the bounty event you can get special tokens to exchange for different mats needed to forge by participating in the new Co-op stage and bounty tasks.
Everything except Time Swir tickets for crystals is worth buying, just gets what you need. 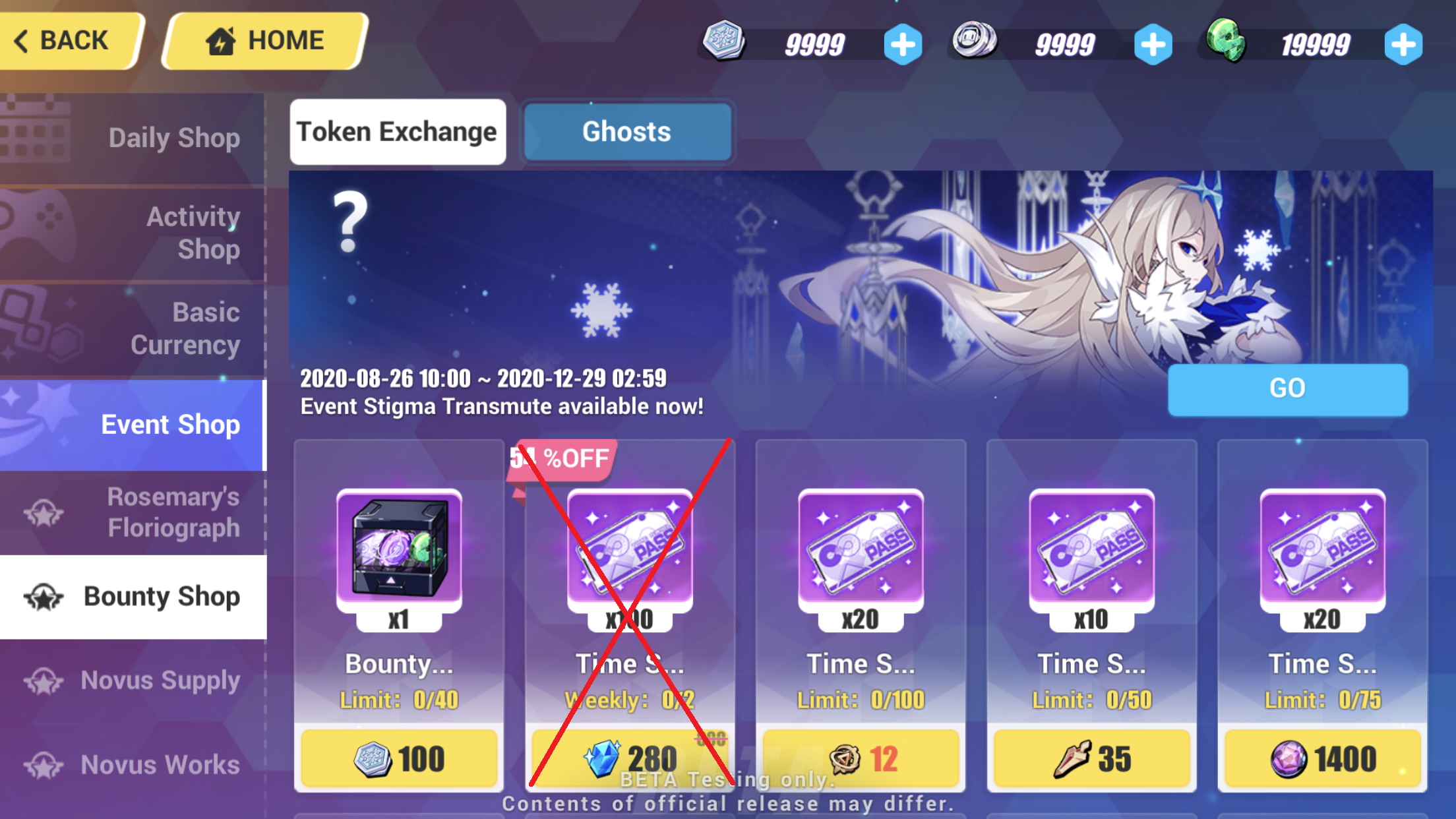 After v4.3 update we will get 3 free bundles (at Lv55, Lv65 and Lv75) that will help us get the new Bounty stigmas a little bit faster. Don't forgot to check LTO after update. 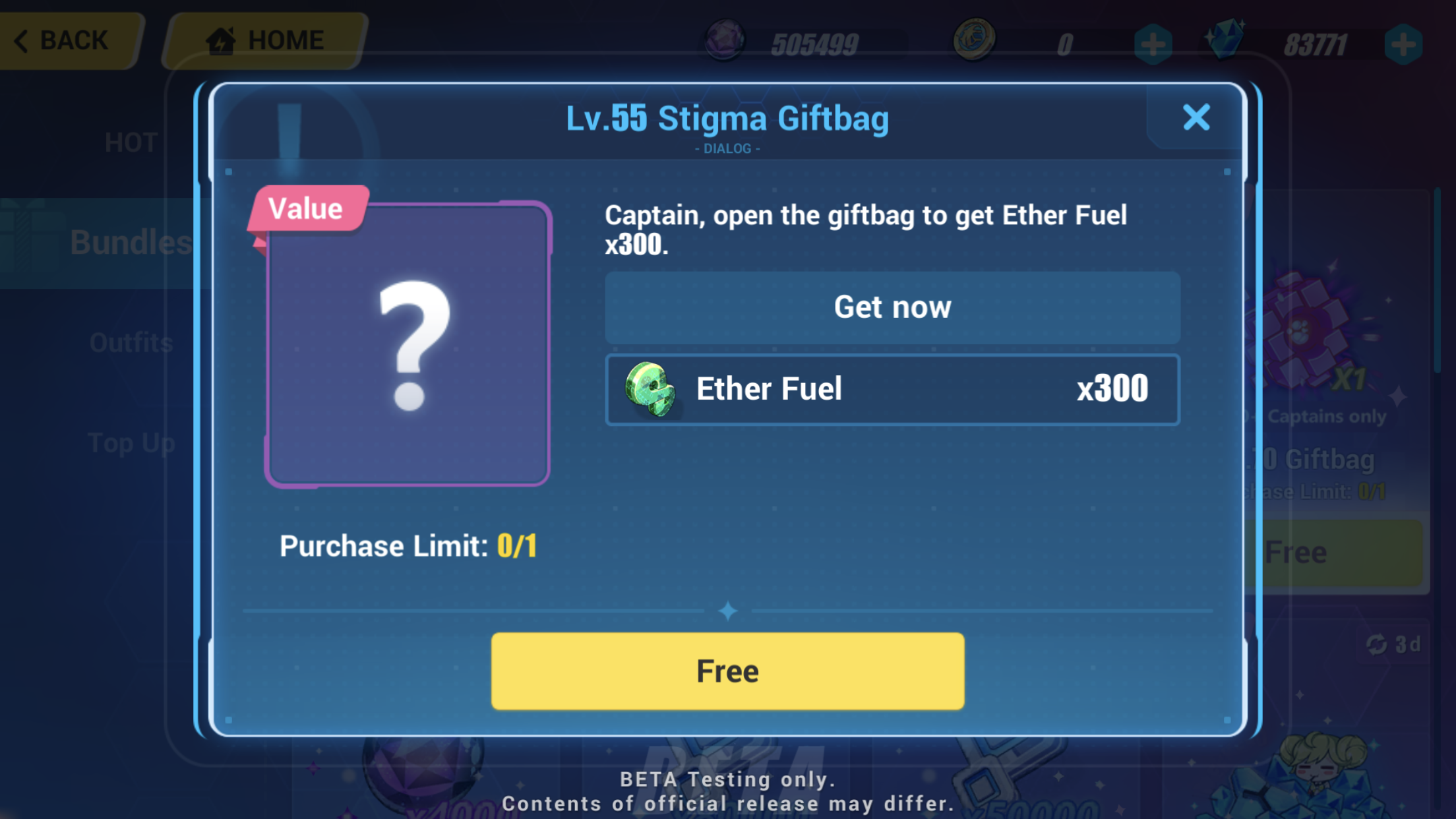 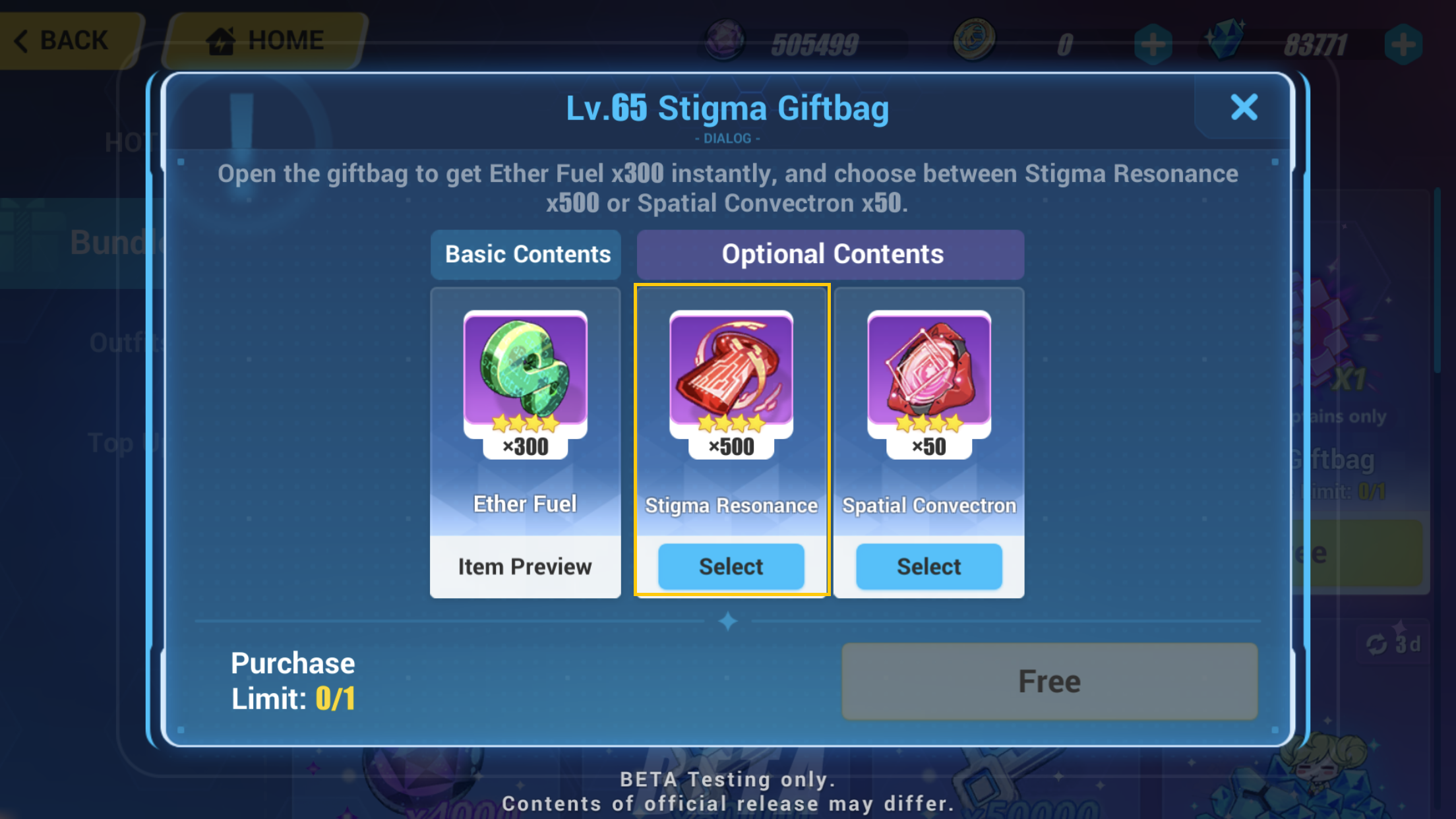 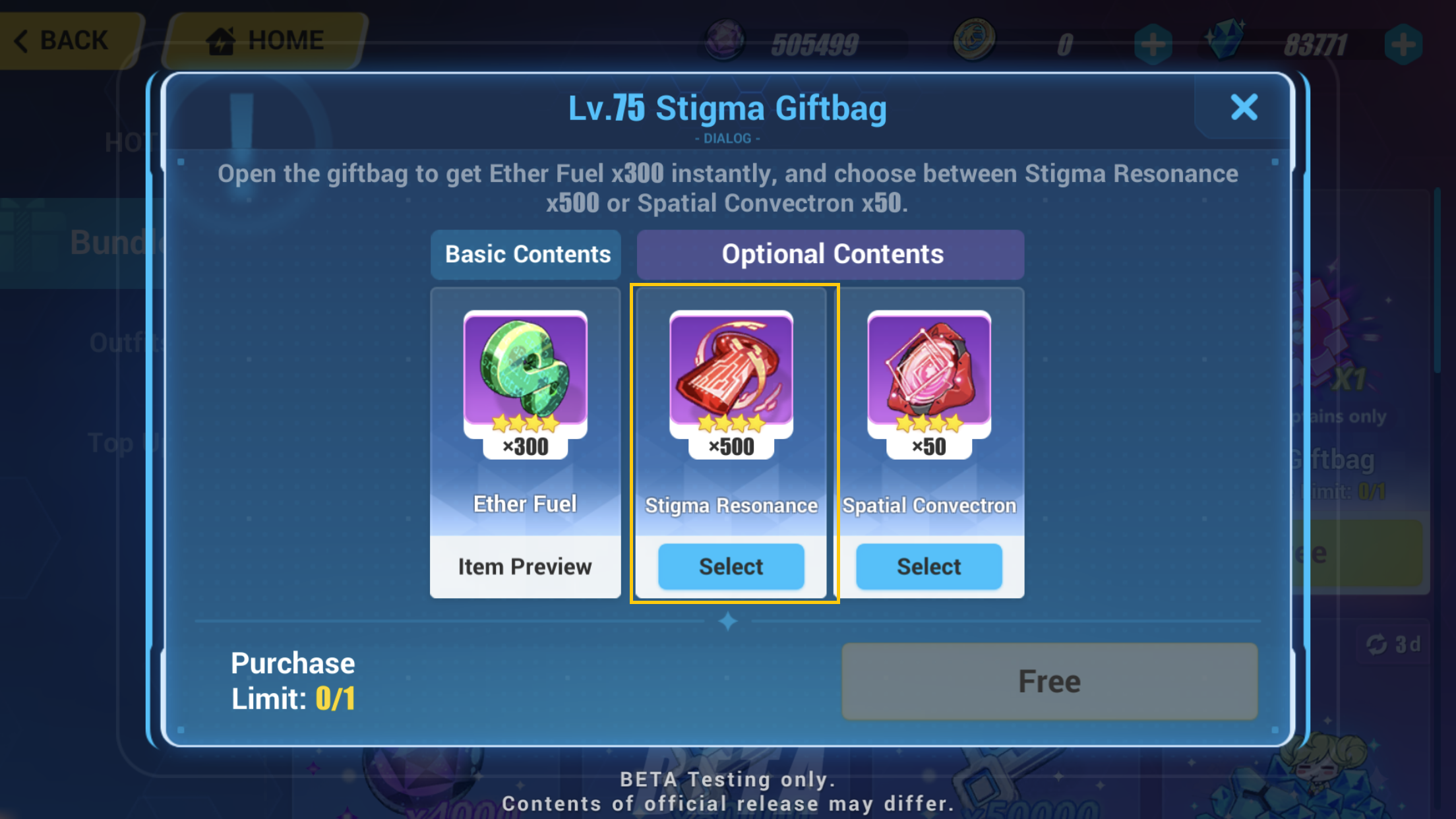 Why I recommend to choose resonators? It's easy, you can buy Convectron with resonators but you can't buy resonators with Convectron, choosing resonators gives you more flexibility.

6. Old BP equipment return
As the end of our beloved orange Lucion, all the equipment from previous Elite Works will return for v4.2. Here's a list of thing that you must buy and things that is good to have: 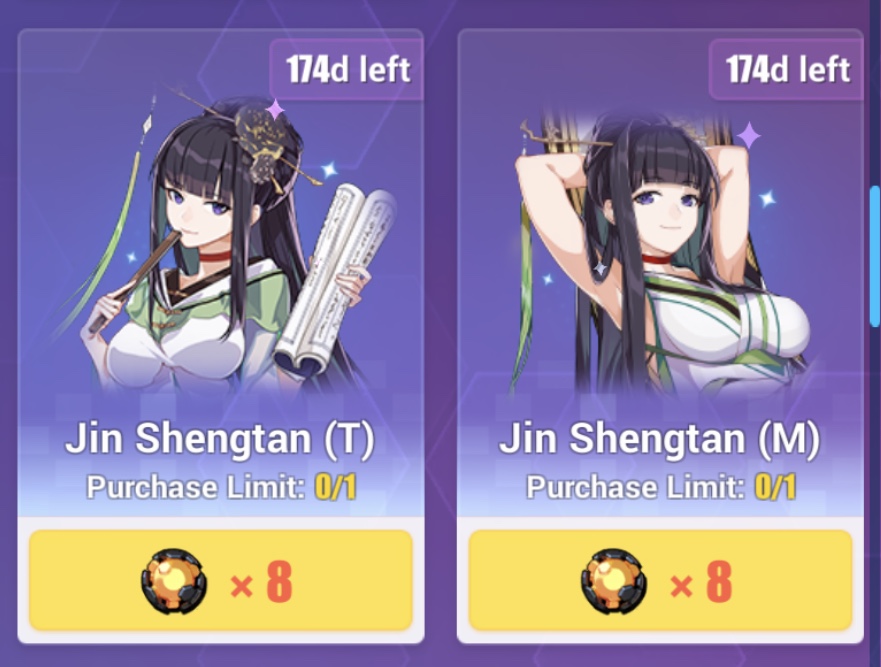 If you already have all those or don't want anything, you can also buy Focused cards or Torus.

7. New BP and the new "Season Theme" system
In v4.2 BP system has some big changes: 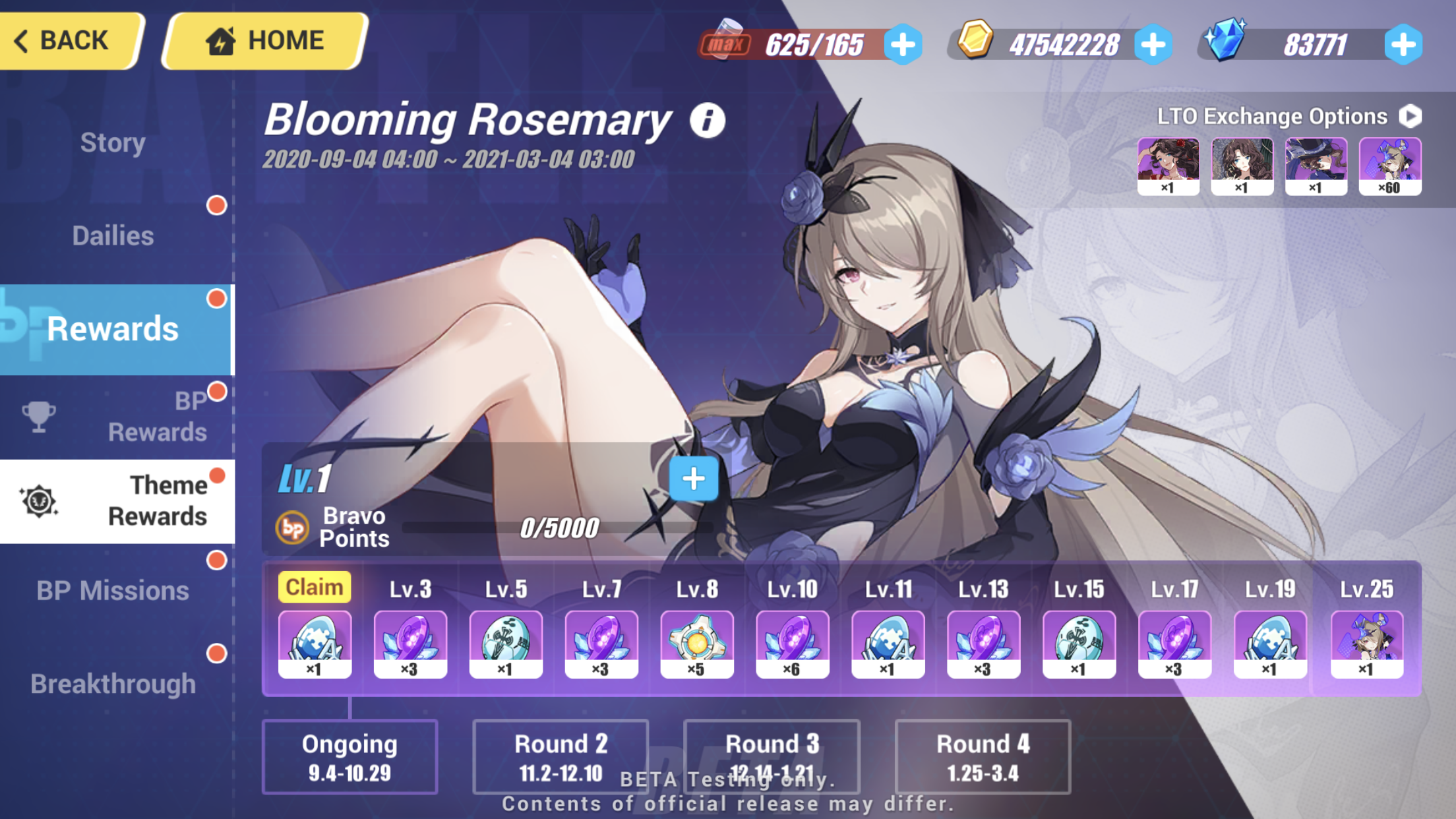 Both are good, Shuhadaku of Uriel (Utu Pri) is more for MA and Surtr Muspellverd (Surtr Pri) is more for abyss.
If you can only afford one, choose Utu Pri, it can also be used in abyss, however Surtr Pri is pretty useless in MA. 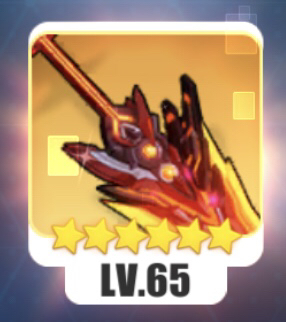 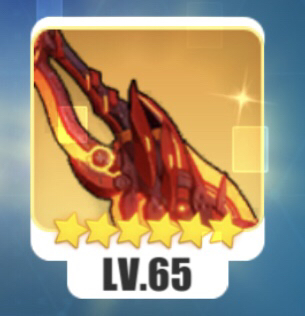 9. New exalted Abyss
In v4.2, all the captains with/above lv81 will be moved into a new Abyss bracket: Exalted; where we will not have Dirac Sea or Q-Singularis anymore, we'll get a new system named "Superstring Dimension", with a ranking system determinated by trophies. For each round, all the captains will sepparated into groups up to 20 players and depending on your score, you'll get more of less trophies.

But of course, Exalted abyss has better rewards, with 100 crystals + mats for completing abyss missions in any bracket and the round finalization rewards. 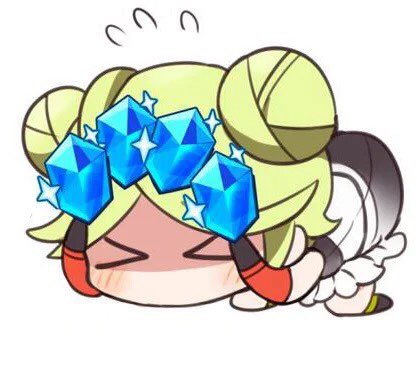 Yes, the fire cat that was killing and making our waifu Zhuge suffer has come into Memorial Arena. 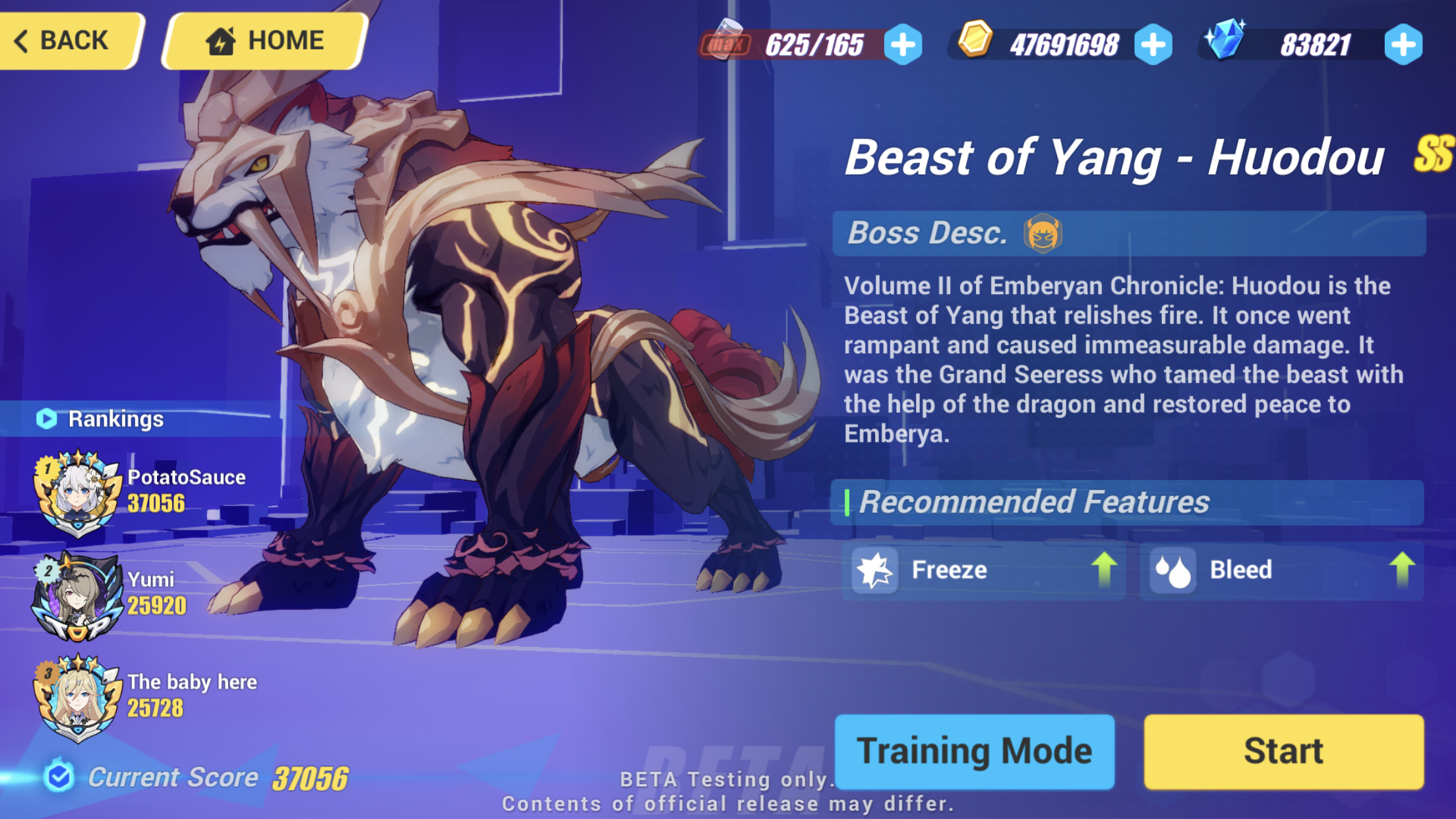 Below I'll show 2 runs I did against that cat:

One is the new Novus Supply, in which we can pull with tickets bought with mithrill, coins, etc. to get the corresponsive tokens and various mats. With the tokens we can buy Acient Willpowers and Acient Teritages among other things. 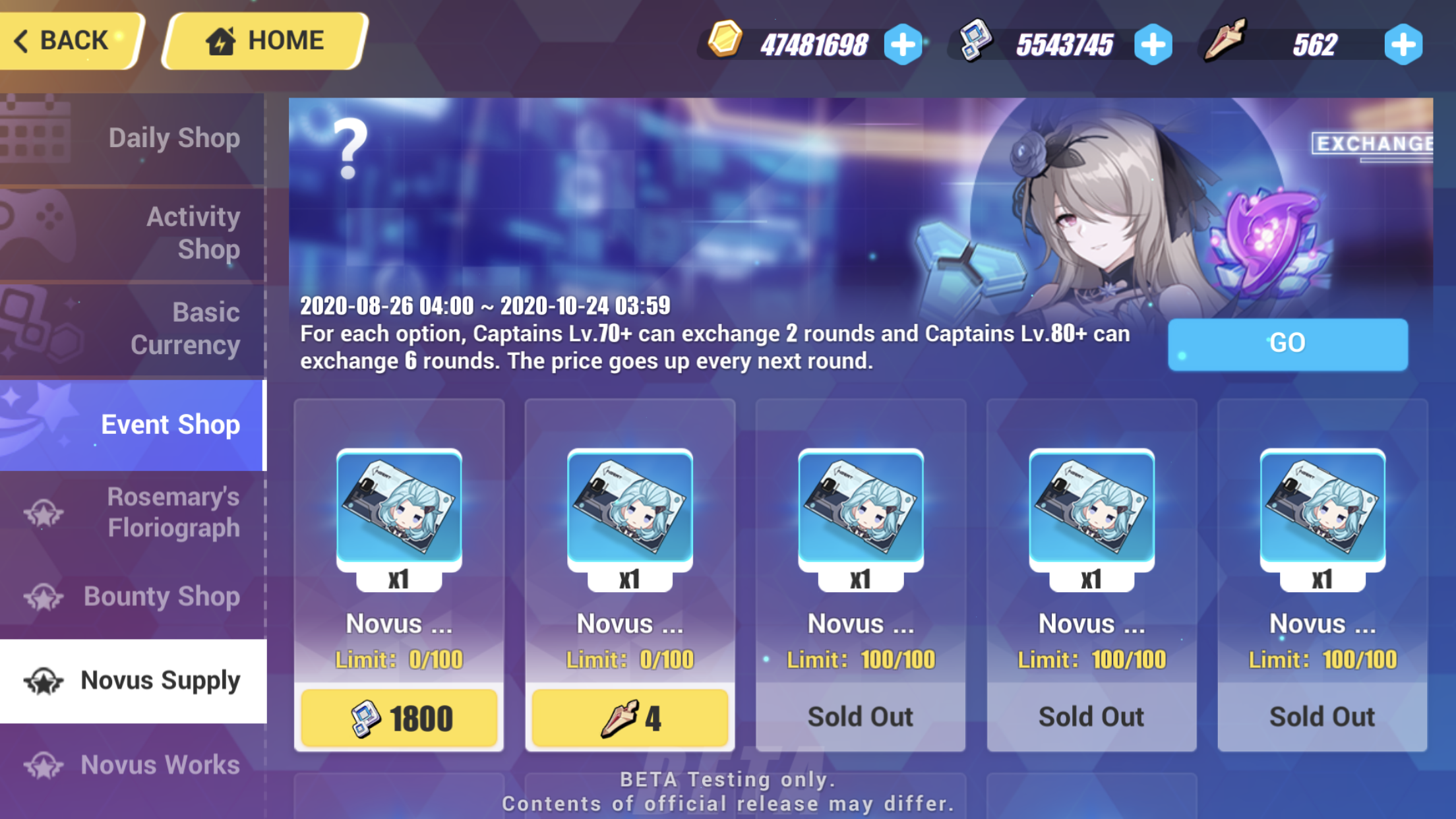 The onther one is the FR Banner.
Don't pull her Expansion banner unless you're a whale, or you do it for waifu purposes.

About her Focused banner, you can pull if you will use the Lucions for other things or you can try luck with a 10x to see if you can get the weapon.

I also made an analysis about the stuff that's in the Focused Supply:

Weapons
Thunder Kikaku: Meta lightning support in MA but pretty useless for abyss, needs a well geared team to work.
Raikiri: Used in some MA meta strats, can convert if you don't care about that 0.2%.
Star Shatterer: Vikrant: DK's BiS, definetly worth keeping, can recast Newt among other utilities.
Swan Lake: Worth keeping to see if 4.3's Roza augment needs it.
11th: Worth keeping, it's Pri Arm is one of the strongest things in game.
Iris of The Dreams: This thing here is why you pull.
Eos Gloria: Worth keeping if you actually use the A rank Doodoo. 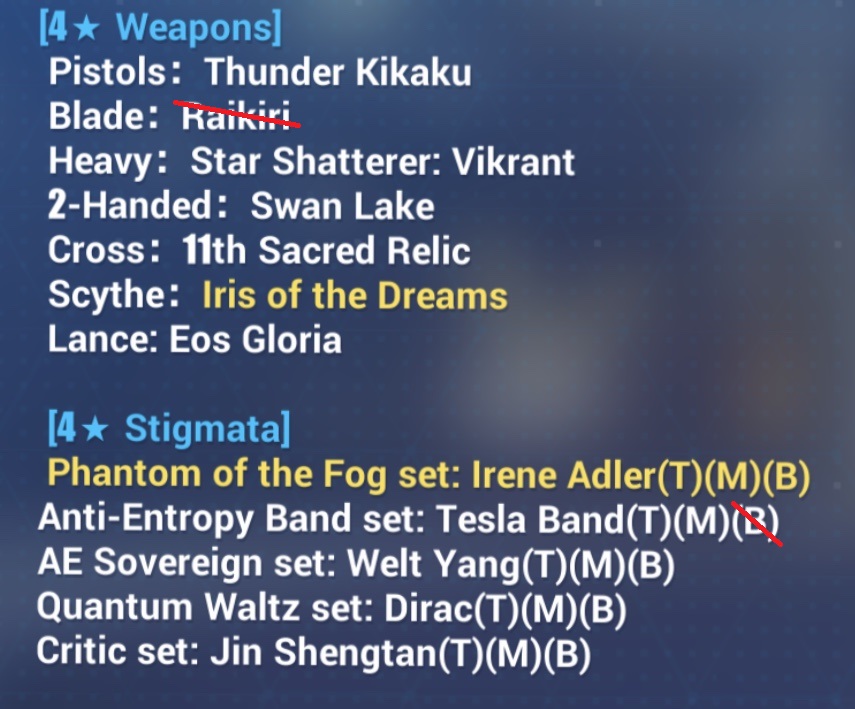 My waifu's event, by just foing the missions and dailies you should get all the important rewards. 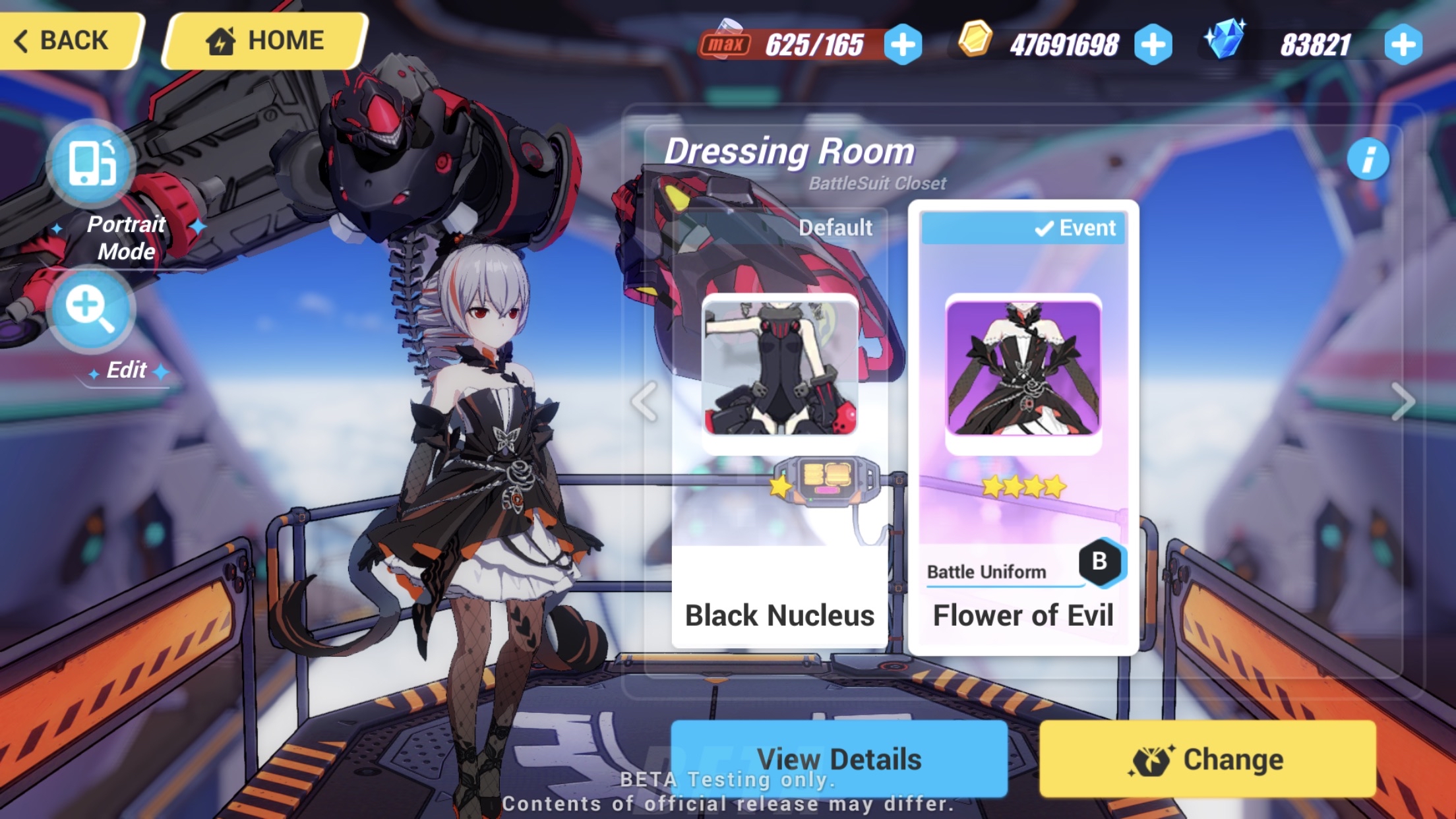 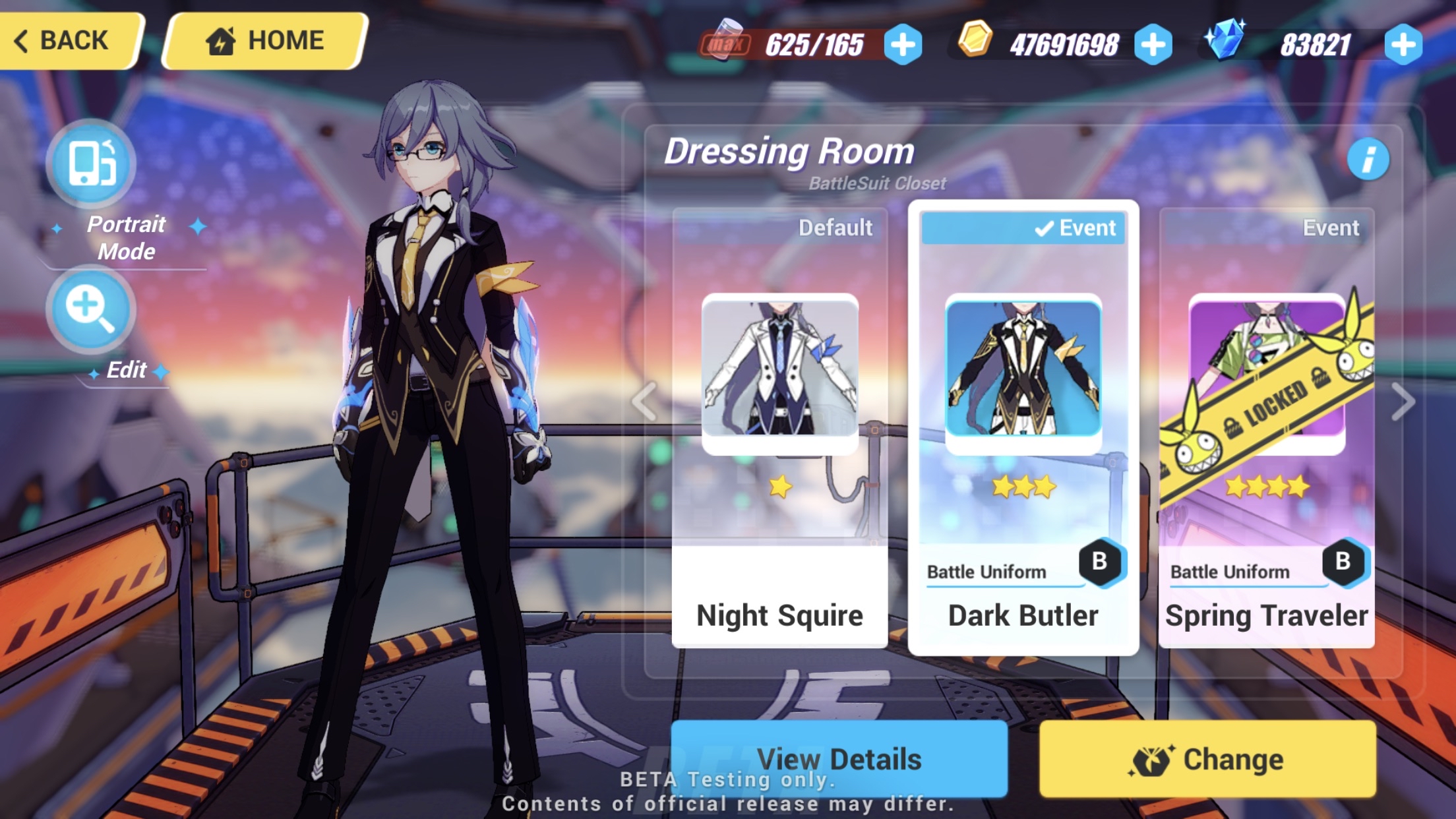 The thing below are MUST BUYS in this new patch: 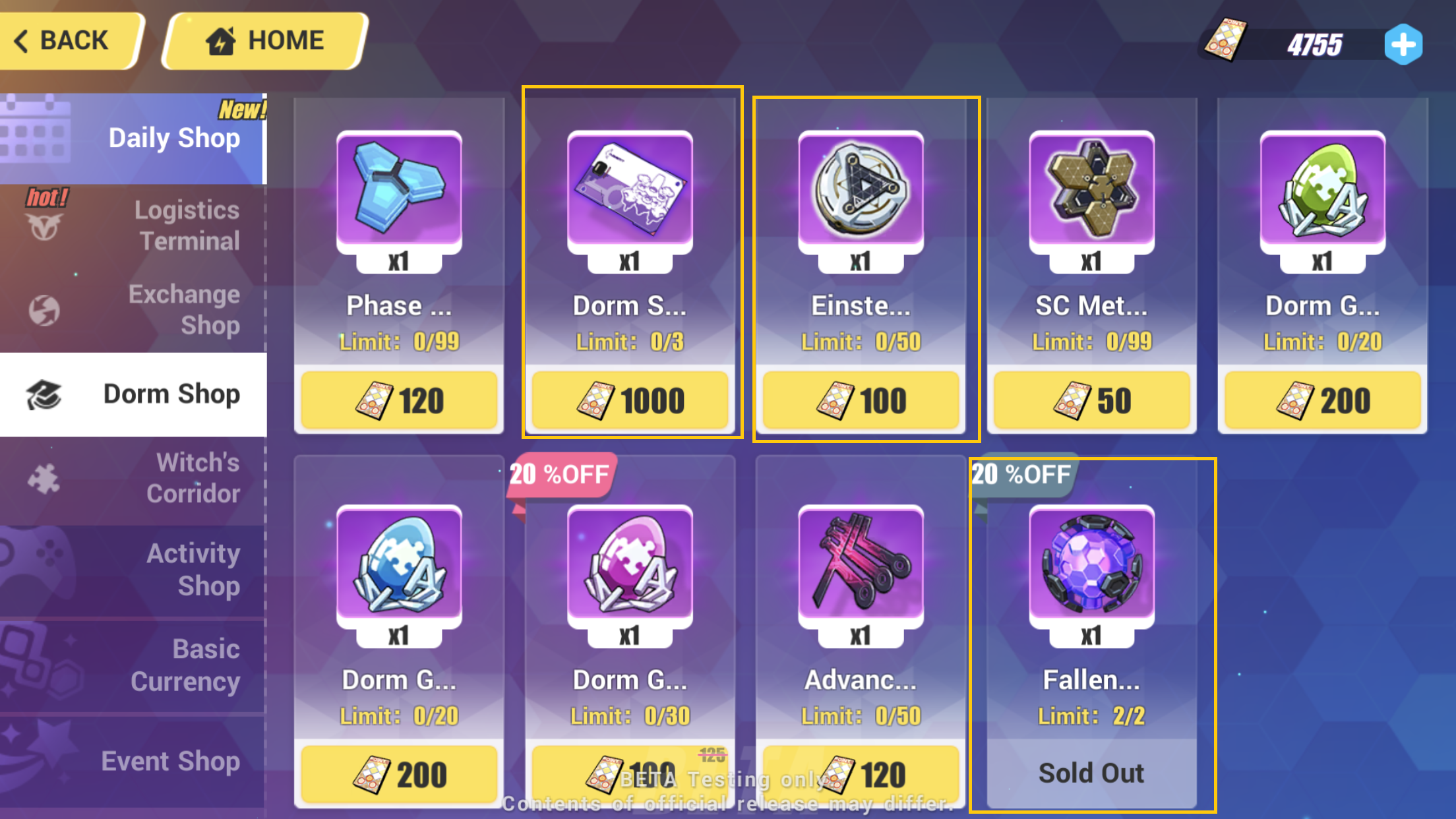 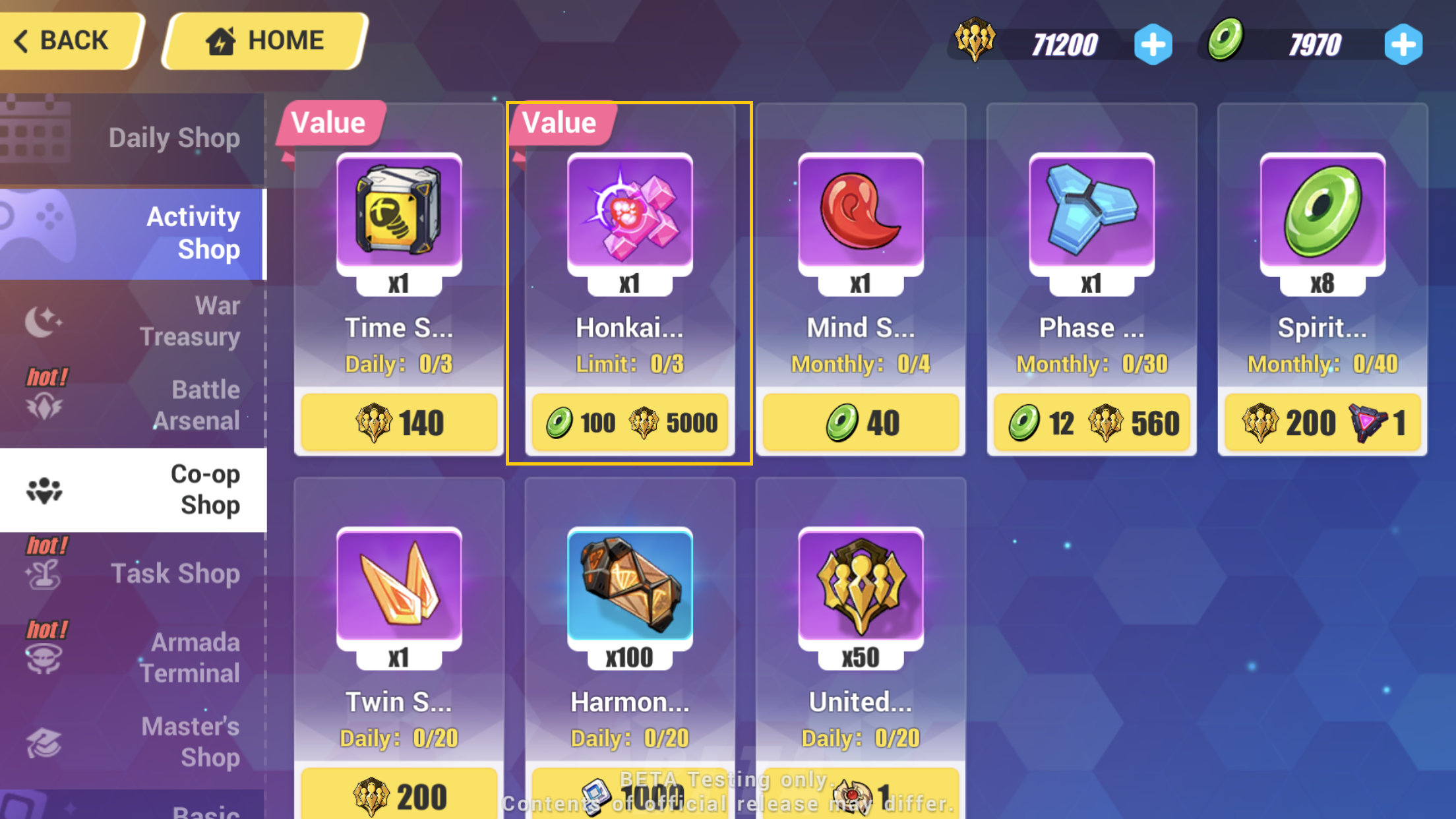 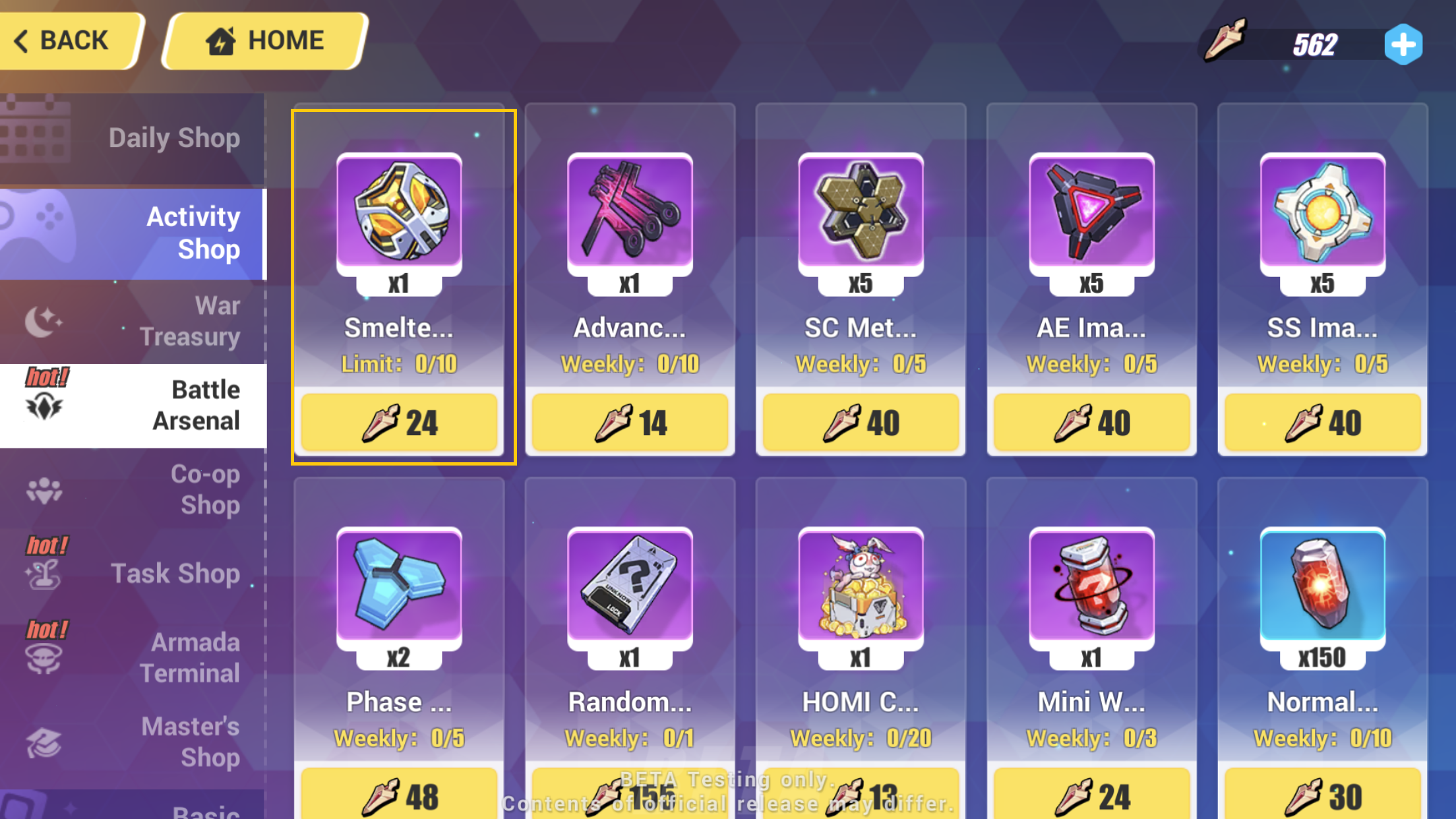 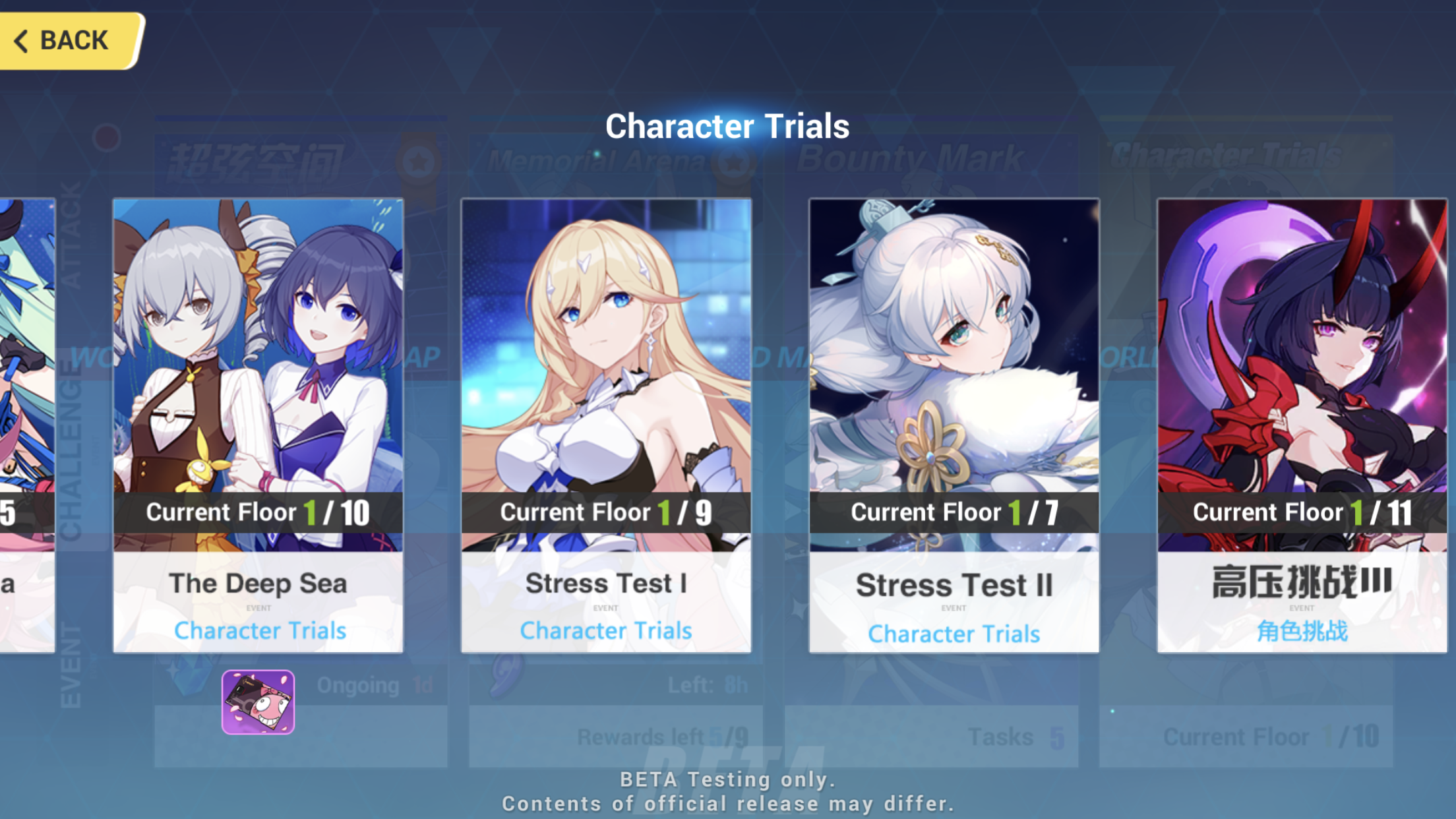 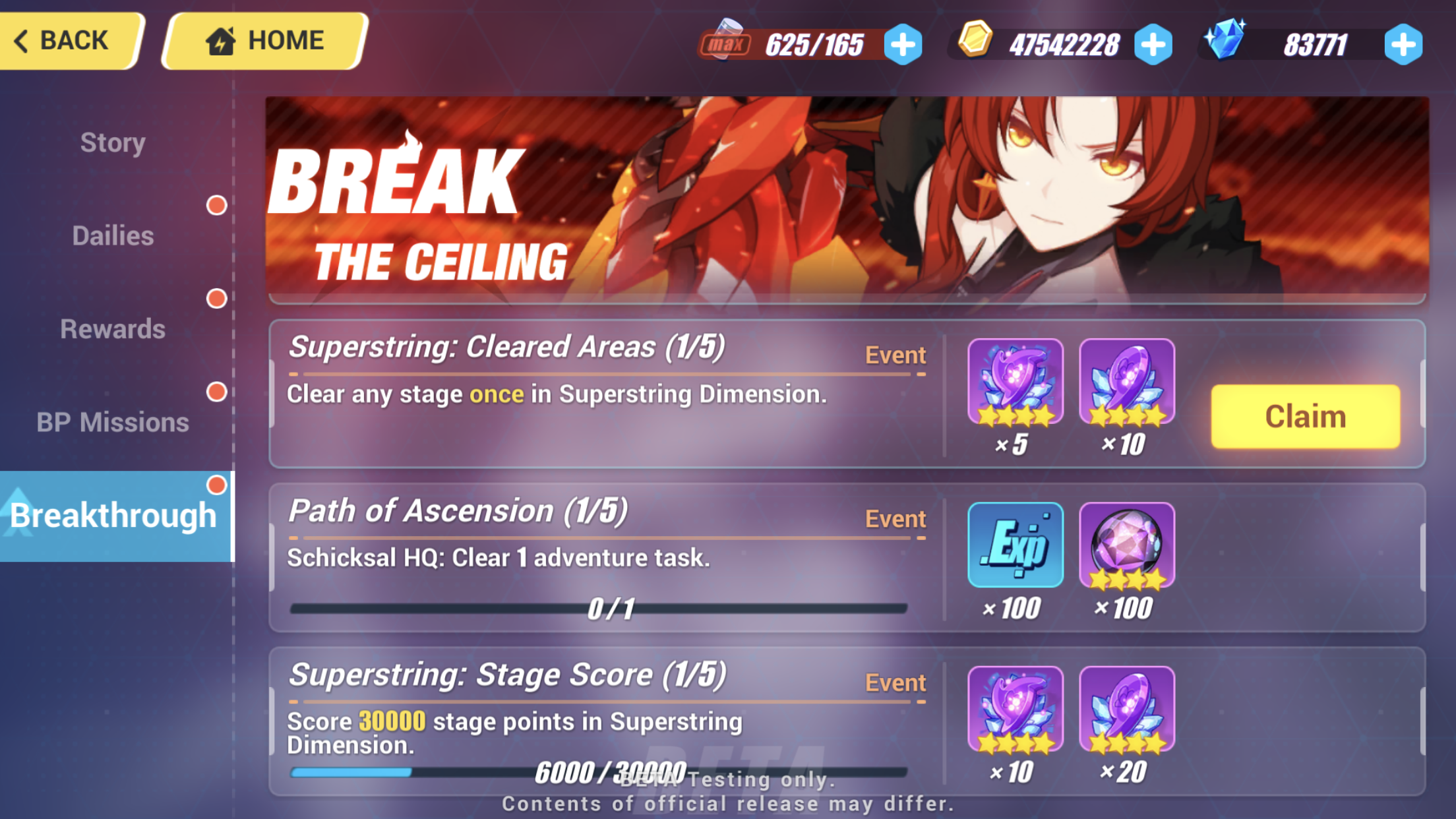 16. The best thing of the update: Now we can zoom 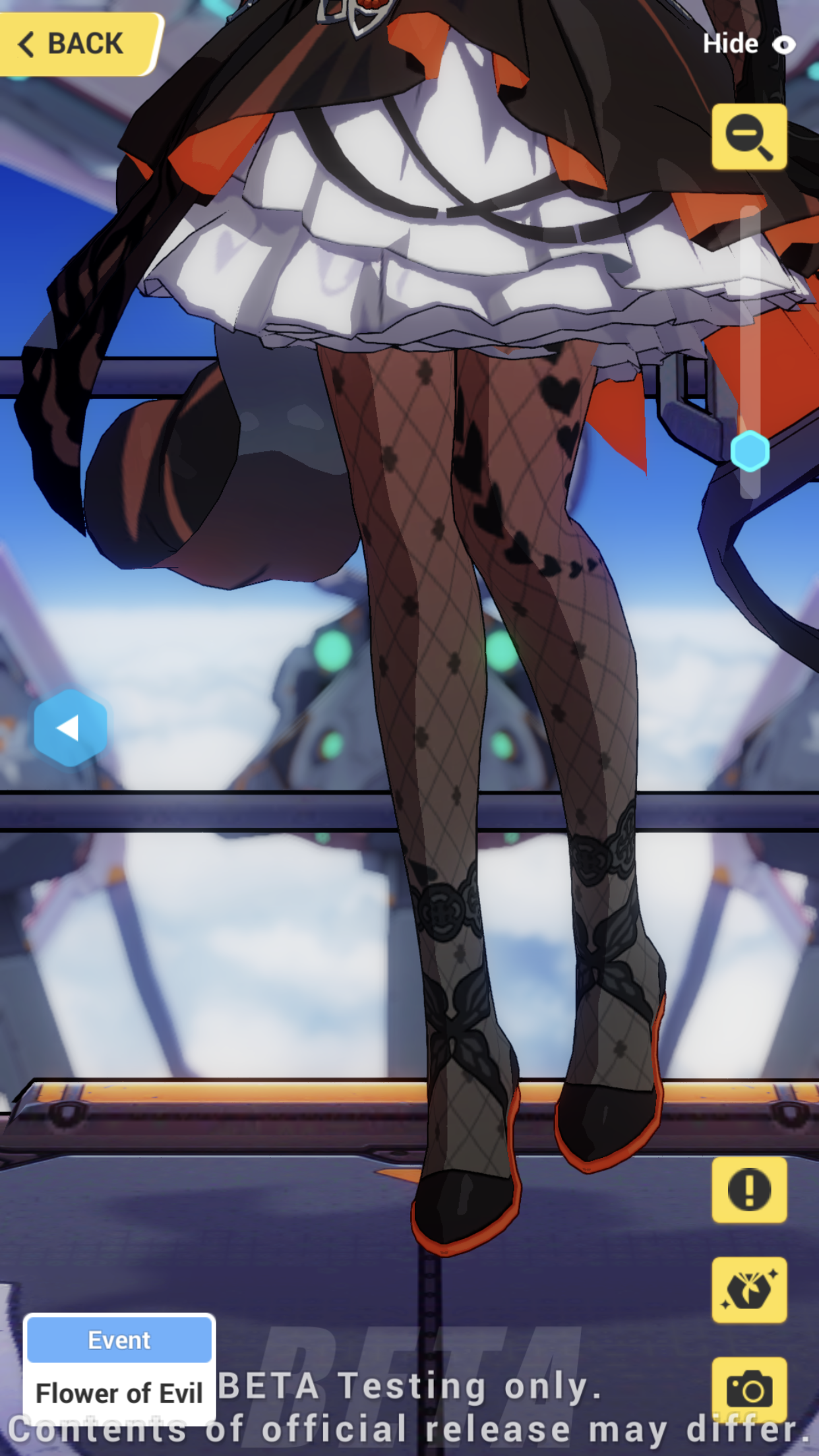 Mmmmmmmm.....between, top-bottom rotation for when?
And that's all.

As always, thanks to Mihoyo's team to let me be in the v4.2's beta and thank you my fellow captain who's reading this.