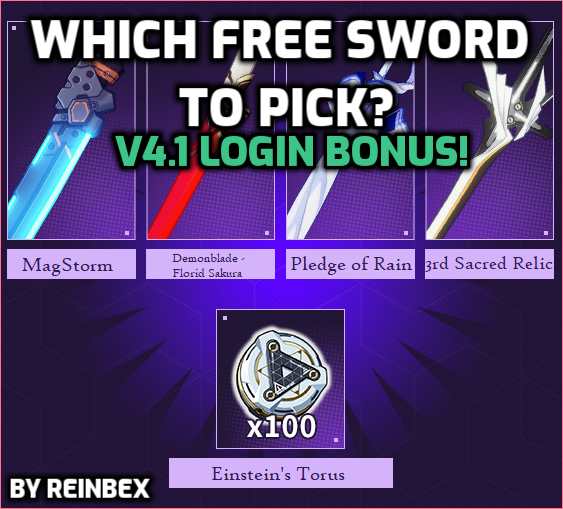 In v4.1, you can pick out a free katana (like the weeb you are) or 100 Einstein's Torus (because fidget spinners) as a login bonus. The login gift will be available from v4.1 till v4.3. In this guide, I will be helping you decide which sword is the right pick for you.

As you can see, you can pick one of the four following swords, MagStorm, Demonblade - Florid Sakura, Pledge of Rain, or 3rd Sacred Relic, or just 100x Einstein's Torouses. Let's cut to the chase and get straight into the meat and potatoes. 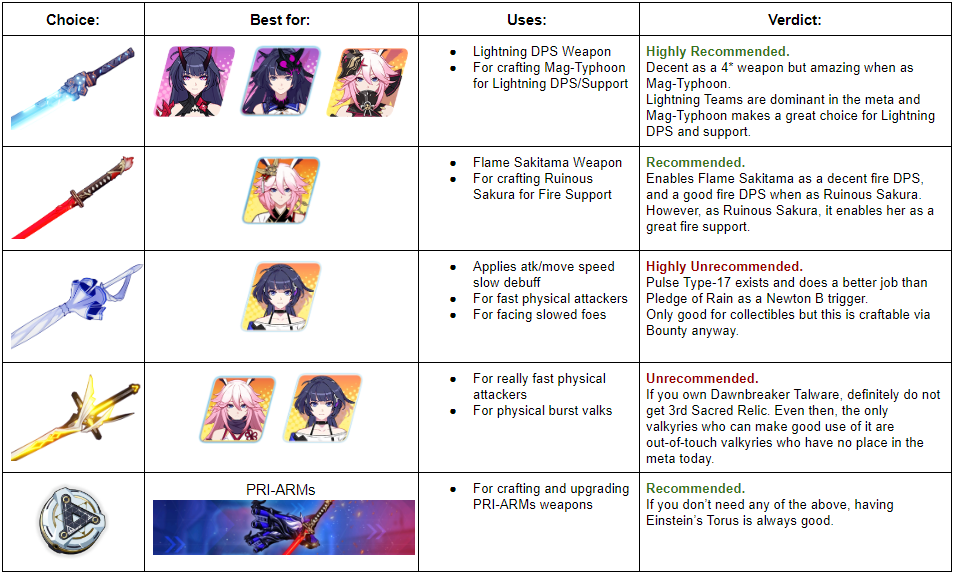 We'll start off with the worst choices first, so we can get them out of the way for consideration.

The 3rd Sacred Relic has been around since day one and is designed for Physical-based and fast-attacking DPS valkyries with a burst mode ultimate. If you own its newer cousin, Dawn Breaker: Talware, you definitely do not need the 3rd Sacred Relic. However, as of currently, the valkyries who can use these swords, Striker Fuminata, Gyakushinn Miko, and a dash of Shadow Dash, have no place in the meta. Therefore, I do not recommend getting the 3rd Sacred Relic even if you lack both swords. However, there are rumors of an augmented battlesuit for Shadow Dash in v4.2, so keep your eyes peeled for if she might need this sword again…

The Pledge of Rain is a decent sword designed for fast-attacking physical DPS valkyries and against atk/move slowed enemies. Its weapon skill can also inflict a 40% atk/move slow debuff for 5 seconds. Incidentally, there exists the f2p weapon Pulse Katana Type-17 with its weapon skill that can inflict a 70% atk/move slow for 2.5 seconds. In the meta, if Lightning Empress leads off in a team with Herrscher of Reason, they can pull off some pretty impressive scores.
This usually demands the two valkyries to have high ranks. Below, I have provided links to showcases of battles that are friendlier to the wallet.

Demonblade - Florid Sakura (DFS) is also craftable via Bounty. It is the signature weapon of Flame Sakitama (FS) . While it is capable of imparting an elemental dmg intake-debuff through its weapon skill, it's mainly for FS's role as a DPS. DFS's weapon skill costs too much SP, while considering how small the debuffs are, to give FS a position as a strong Elemental Support valkyrie. However, the PRI-ARMs variant, Ruinous Sakura, is very powerful. With it, FS can be a good DPS but an even better Fire support valkyrie in Memorial Arena. If you already have the weapon Mag-Typhoon or are eligible to craft Mag-Typhoon, then I recommend getting Demonblade - Florid Sakura. You can save time farming for DFS through this gift and expedit the time it would take for you to obtain Ruinous Sakura.

MagStorm, the last of the four swords, is also craftable in Bounty. It's a very “standard” sword; It provides the user a 40% Lightning DMG boost and comes with a weapon skill that deals some lightning DMG followed up by short paralysis. The 4* sword is just not impressive. However, its PRI-ARMs variant, Mag-Typhoon, is a top tier meta weapon. Lightning teams have been rather dominant in the meta in the past several versions, and is going to be especially so with v4.1's introduction of Herrrscher of Thunder. The Mag-Typhoon enables Lightning Empress to be a good DPS but an even better Lightning Support Valkyrie. It also can be wielded by DPS valkyries such as Darkbolt Jonin and Herrscher of Thunder.

Now, you may be wondering, how does it compare to the new blades Key of Castigation and PRI-ARMs Domain of Sanction? When wielded by valkyries who are not Herrscher of Thunder, the violet blades provide less Lightning DMG buffs than MagStorm and Mag-Typhoon. Therefore, I will only be comparing the values when wielded by an S-rank Herrscher of Thunder with a full Benares set who performed the same actions throughout each test below. The tests will be in top to down order of: Domain of Sanction, Mag-Typhoon, Key of Castigation, and MagStorm. 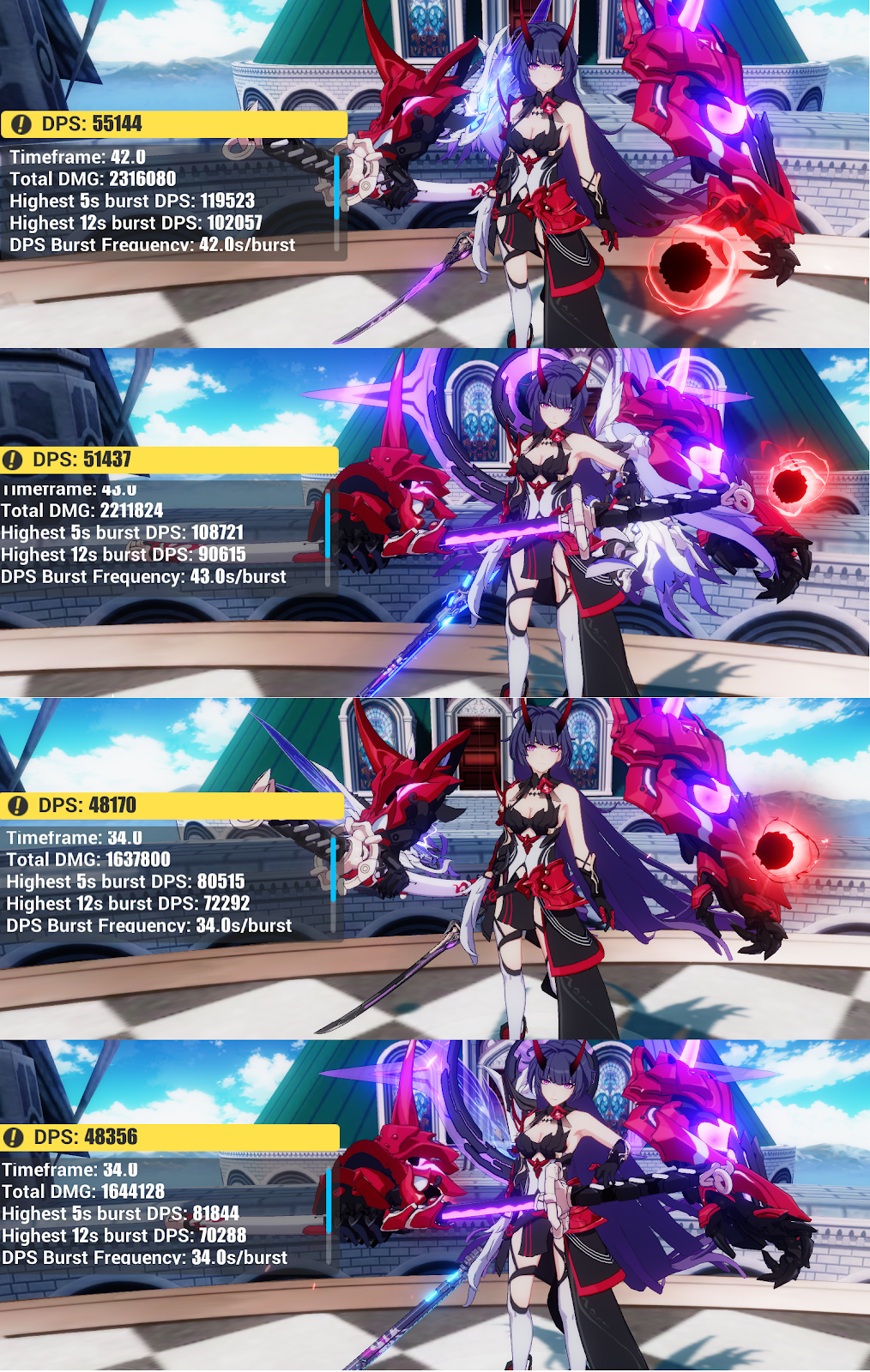 Now, does it mean you shouldn't get MagStorm? No. Here is what you should do: If you don't have either Florid Sakura and MagStorm, I suggest picking MagStorm. This is especially true if you plan to get Herrscher of Thunder and cannot get your hands on the Key of Castigation. If you already have Florid Sakura and not MagStorm, do get MagStorm. You can farm for Florid later in Bounty. If you already have both weapons, and/or PRI-variants, you could either pick out a second MagStorm for your Darkbolt Jonin or select Einstein's Torus. However, you should not pick a sword just for the Honkai Cube. More on that in the next section… 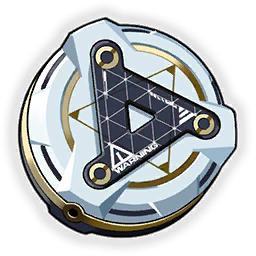 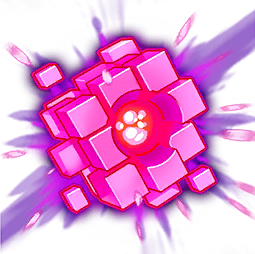 Also keep in mind that you must currently own or, at one point during your game-time, have owned the lv.35-50 sword variant of the PRI-ARMs in order to craft the respective PRI-ARMs.

If all the following are yes:

Then select the 100x Einstein's Torus

But what if you could use a gacha weapon right now and don't need Torus? If you just want a weapon right now, pick between Florid Sakura or MagStorm. You can purchase 10 Reson-Convert for 2000 Asterites to convert a gacha weapon into 1000 Weapon Resonance later on if you wish. It costs 500 Weapon Resonance to purchase 50x Einstein's Torus. Just avoid getting the Honkai Core. 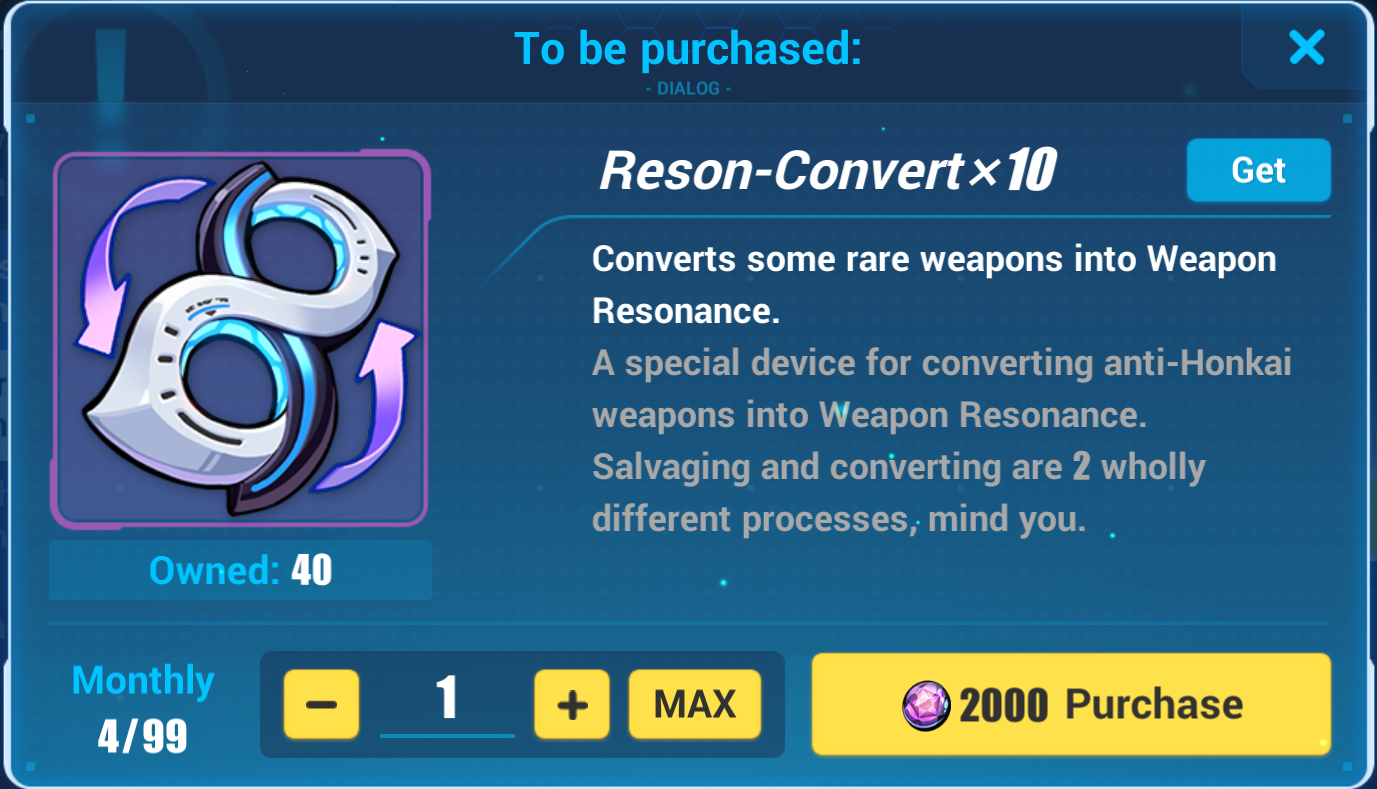