Hi captains~ We meet again in another patch overview! Yay!

This guide will give a glance on most of the contents in version 3.6 - Ninja's Noir. Detailed guide on new valkyrie and equipments will be covered by other amazing guide creators!

Darkbolt Jonin (DJ) is the new A-rank, BIO SP battlesuit of Yae “Kasumi” Sakura. DJ Yae has a highly-mobile combat style - able to deal lethal Lightning DMG on any enemy on the battlefield. She can consume her special meter Zakti to unleash deadly slashes! Her Ultimate summons Rakshamaru to deal AOE Lightning DMG, paralyze and apply conductive on enemies. Shocking!

DJ Yae is the first new SP battlesuit, which has these special properties:

Where to get DJ Fragments

You can get DJ Yae fragments from Asterite Shop, Battle Arsenal, event missions and event shops. If you complete all events and don't miss any purchase, you can upgrade DJ to SS-rank by the end of v3.6 There will also be a special Darkbolt Jonin Supply to quicken your farming. 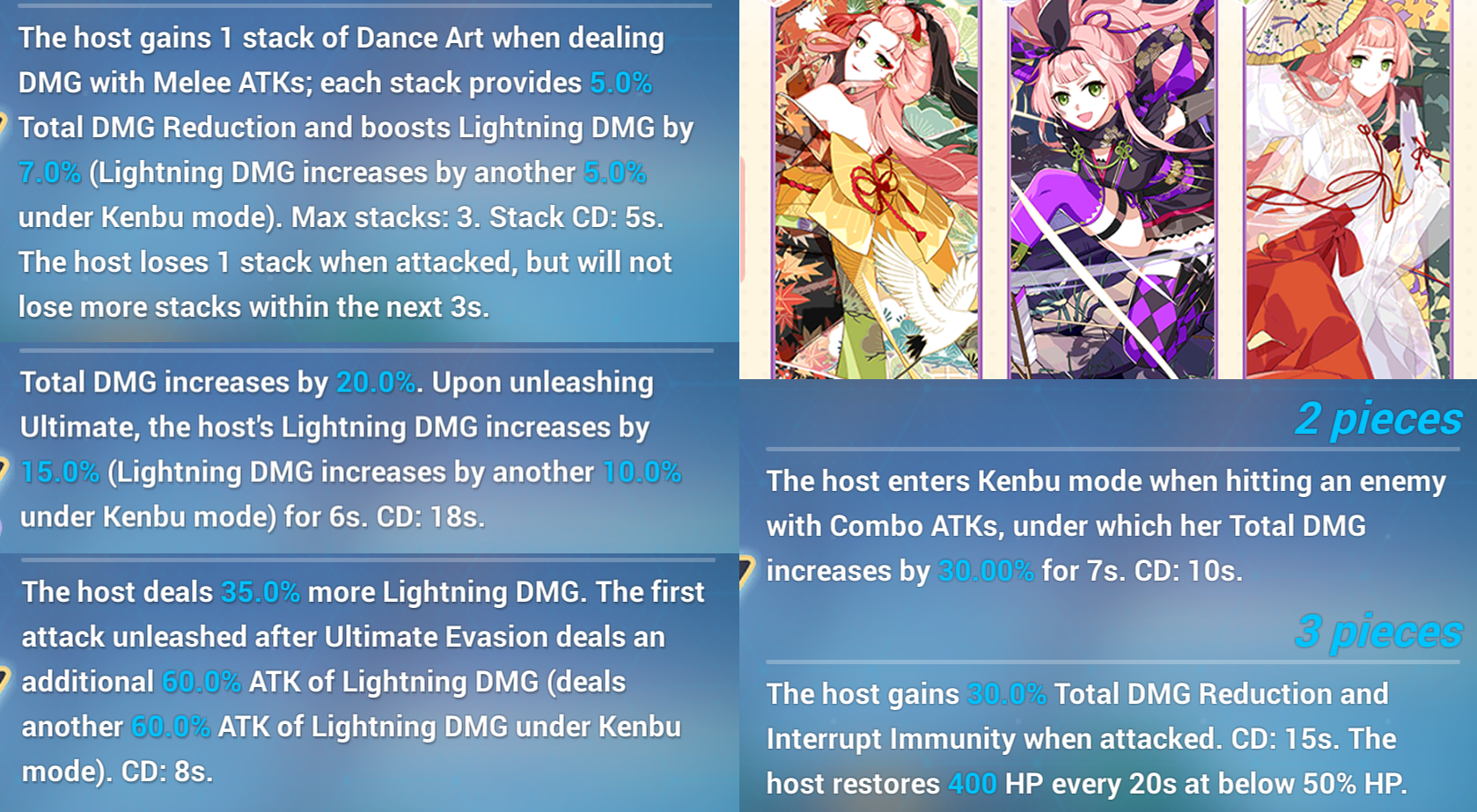 Isihikawa Goemon is a very powerful lightning set. Recommended for lightning valks with Combo ATK to trigger Kenbu Mode, for example - DJ Yae, Shadow Knight (SK), Hawk of the Fog (HF) and Lightning Empress (LE). There will be a special Ishikawa Goemon Supply that guarantees you to get full Goemon set in 90 pulls maximum! 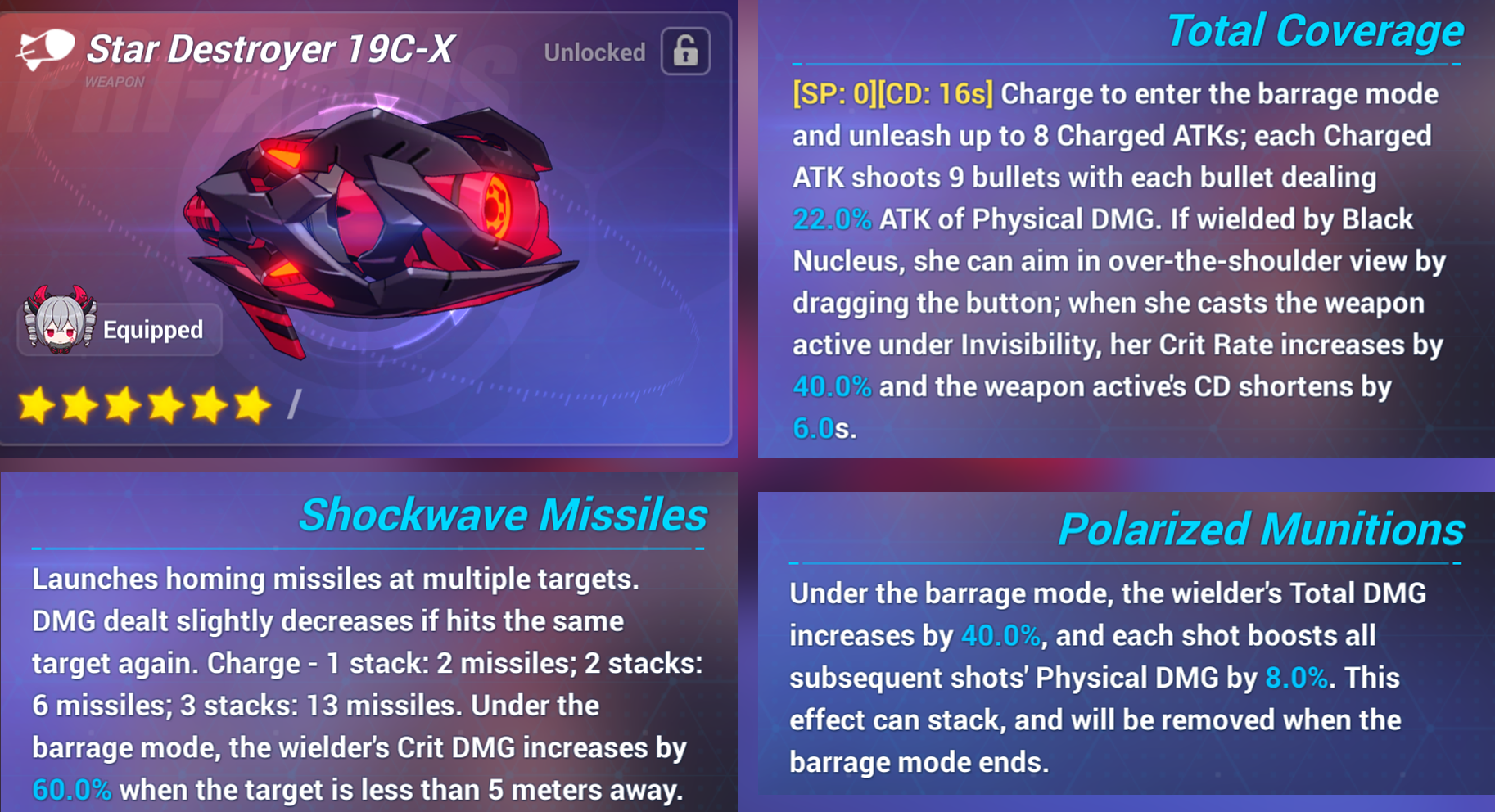 Star Destroyer 19C-X is the PRI-ARM breakthrough of Star Destroyer 19C. Active skill fires volleys of powerful bullets. This skill counts as Charged ATK, so it will be buffed from stigmatas or skills that boost Basic / Charged ATK such as Schrodinger T, Kafka and much more!

Also, when equipped on Black Nucleus (BN), she will enter a cool over-the-shoulder view to continuously fire barrages. So cool! 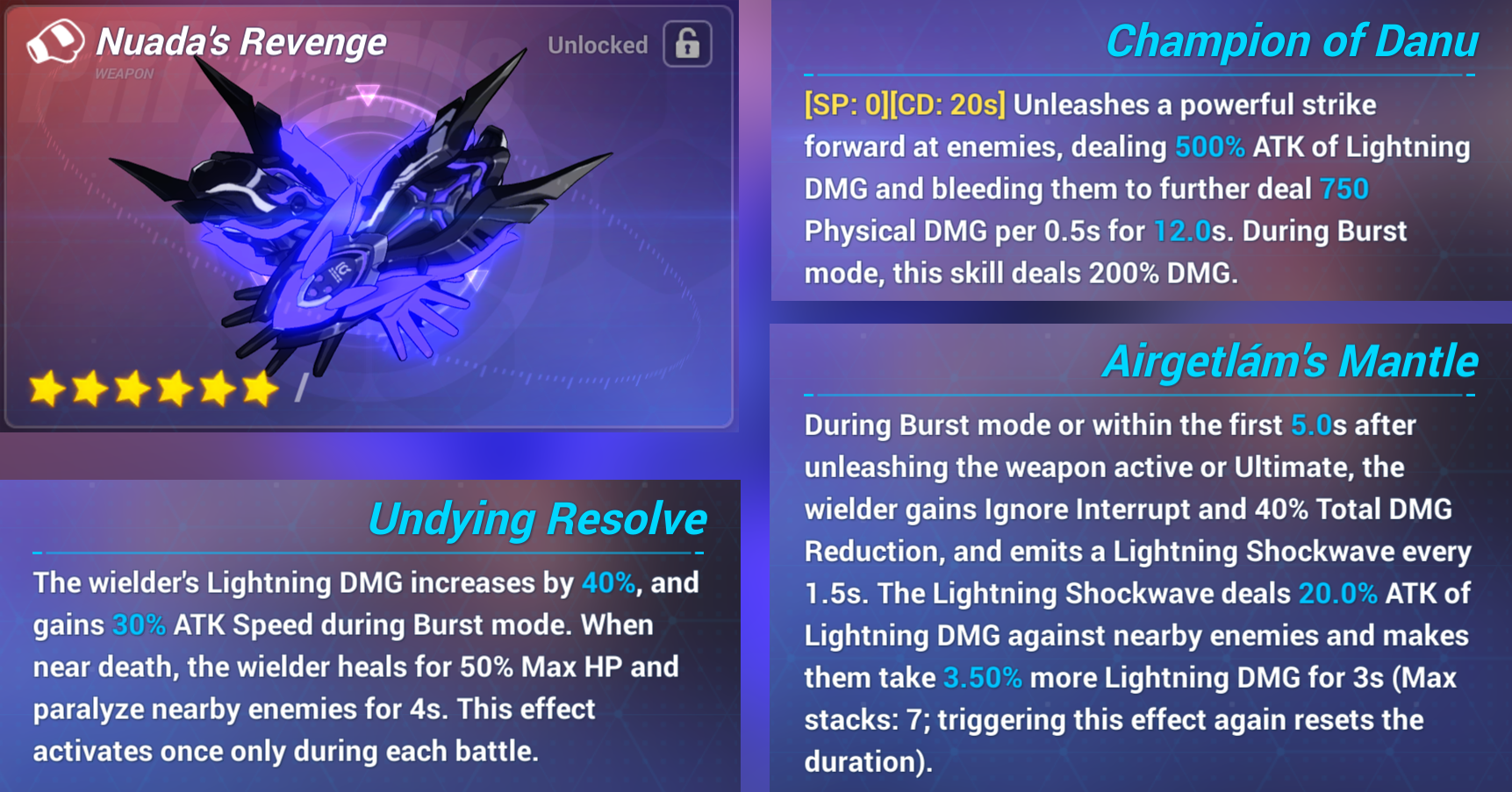 Nuada is no longer griefing - Nuada is now seeking revenge.

Nuada's Revenge is the PRI-ARM breakthrough of Nuada's Grief.  It is a powerful lightning weapon made for SK, giving her everything she needs - DMG boost, bleed, ATK speed, increased Lightning DMG taken and survivability.
Currently it is the only PR-ARM with no Valkyrie-exclusive skill, so HF can also benefit from this weapon.

V3.6 Battle Pass adds these new gears to Elite Works. I recommend getting Nuada's Grief to unlock the ability to craft Nuada's Revenge, and Jin Shengtan for strong elemental support.
​ 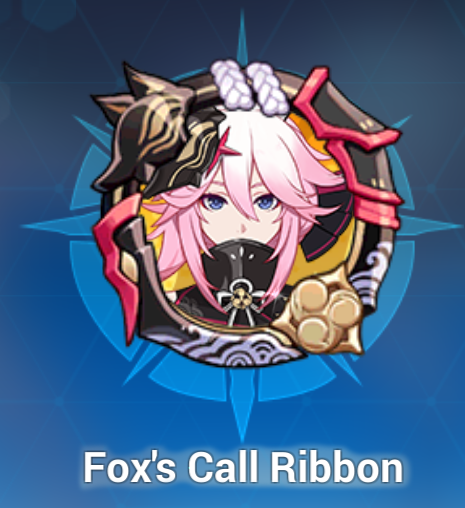 These are all the new costumes added in v3.6. Kiana is so cute nya, Kallen looks so elegant and Rita is so hot! Kya~
On top of their gourgeous design, Baste's Secret and Hanami Daimyo both have cool new effects for some skills, while Hanafuda Oyadun gives Umbral Rose(UR)'s visual effect a bloody red recolour! Woah!

Hundreds of years have passed since the bittersweet legend of Yae Sakura and Kallen Kaslana. Now, a new ninja legend is born.
As Kasumi, you must investigate and uncover the secrets of Yae Machi village, with the help of Ferryman - a mysterious yet familiar person. As you progress in this event, you will learn the truth of Kasumi's relationship with Sakura.

This event will also feature a new Divinity lobby with cool mini-games. So cute! 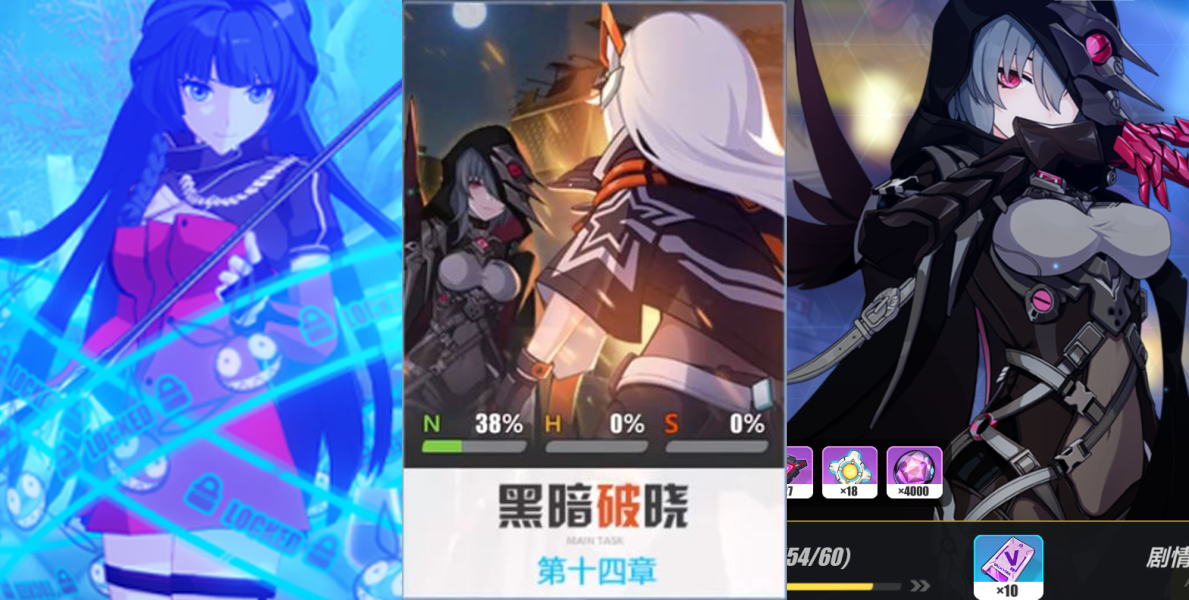 In order to stop World Serpent, Kiana and Rita put their differences aside and join forces. Darkness is spreading... Can they return the light to this dying city?  Raiden Mei will also make a fateful return! Yay!

Participate in the limited-time event to get these rewards - 4* Raven stigmata, Honkai Shard, Imaginons, Asterites and much more!

THE KEY OF BINDING 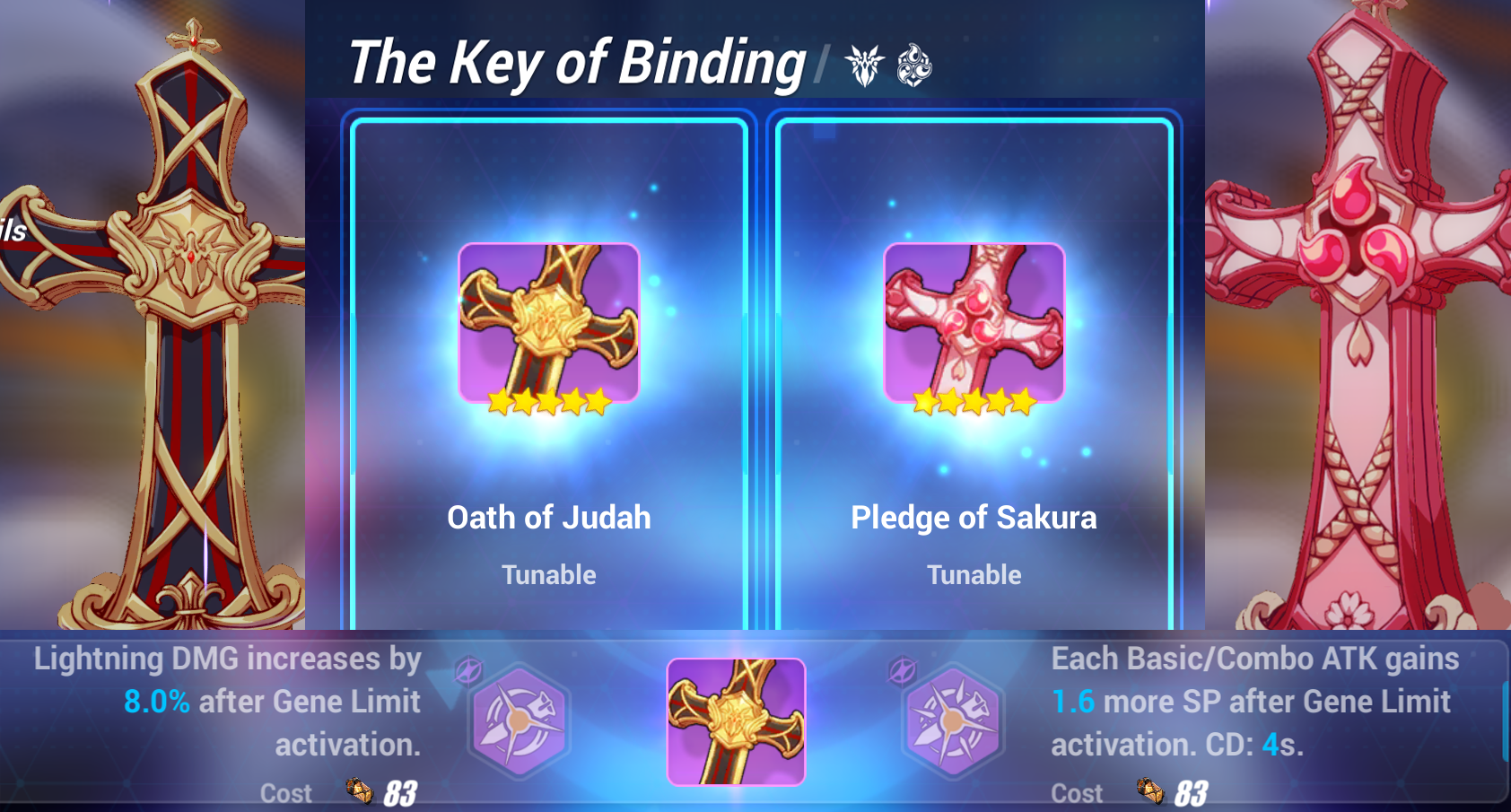 New Divine Key - The Key of Binding has been added. You must tune Oath of Judah or Pledge of Sakura to unlock Key of Binding. Then, you can upgrade Attribute and Special Skills to get global stat boost and Gene Limit. Tuning both weapons will allow you to get additional global +10 ATK! 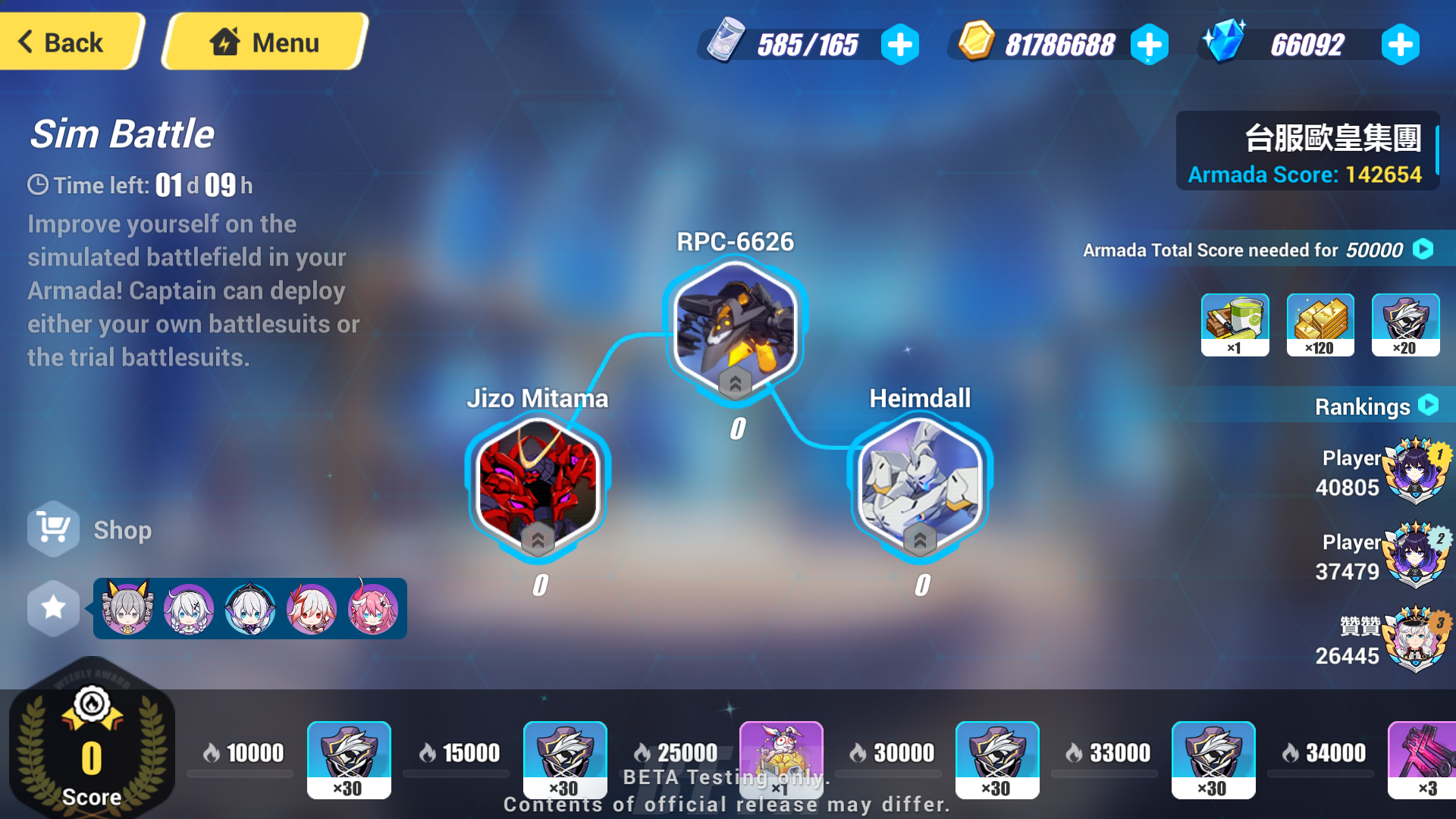 Sim Battle is a new boss attack mode for the whole Armada! Each round, you can fight three bosses using Valkyries prepared by Ai-chan or using your own Valkyries. There are rewards for invidual score and total armada score, including Ranger Creds, Gold and Advanced Skill Materials. There are two rounds of this mode every week (Mon - Wed, Fri-Sun).

Everyone will get additional 25-pulls guaranteed S-rank counter for Dorm Supply.
Note: Unconfirmed for Global / SEA. In CN, this was the compensation for a Dorm Supply bug.

Dorm Equipment Supply is a new equipment supply with greatly increased droprate for NEW weapon or stigmata. It will be available as event in v3.6, and will permanently replace Standard Equipment Supply in v3.7. 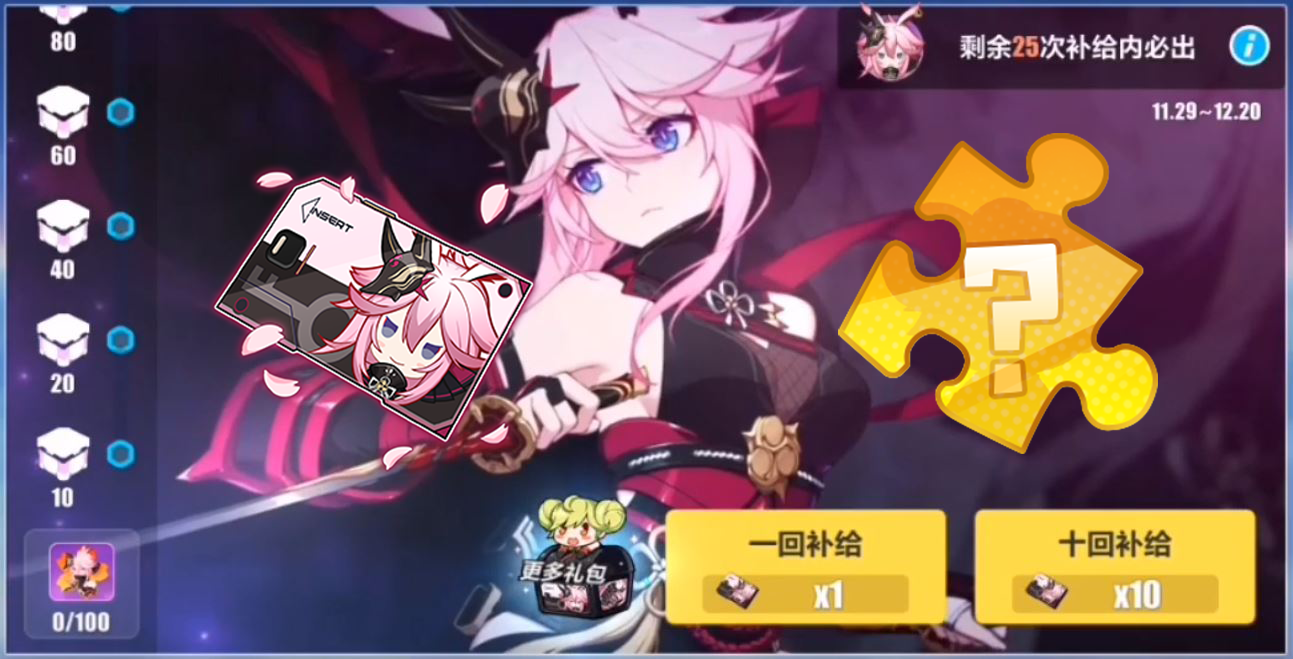 This special supply consists of all A-rank valkyries, with DJ Yae having increased droprate.

This is a special equipment supply featuring Magstorm and Ishikawa Goemon set.

GAMEPLAY CHANGES
Ignite Trauma Adjustment
Some adjustments are made regarding ignite trauma.
1- Ignite from skills and equipment are now categorised into four levels of intensity - filling 3/5/10/18 points of ignite trauma.
2- Argent Knight: Artemis ignite trauma gauge reduced from 40 to 30.

3- Two weapons have been heavily affected by this change - Ranger's Cross and Devourer. Ai-chan will compensate by providing two Extractor Pods that can be used to extract ONLY these two weapons.​ 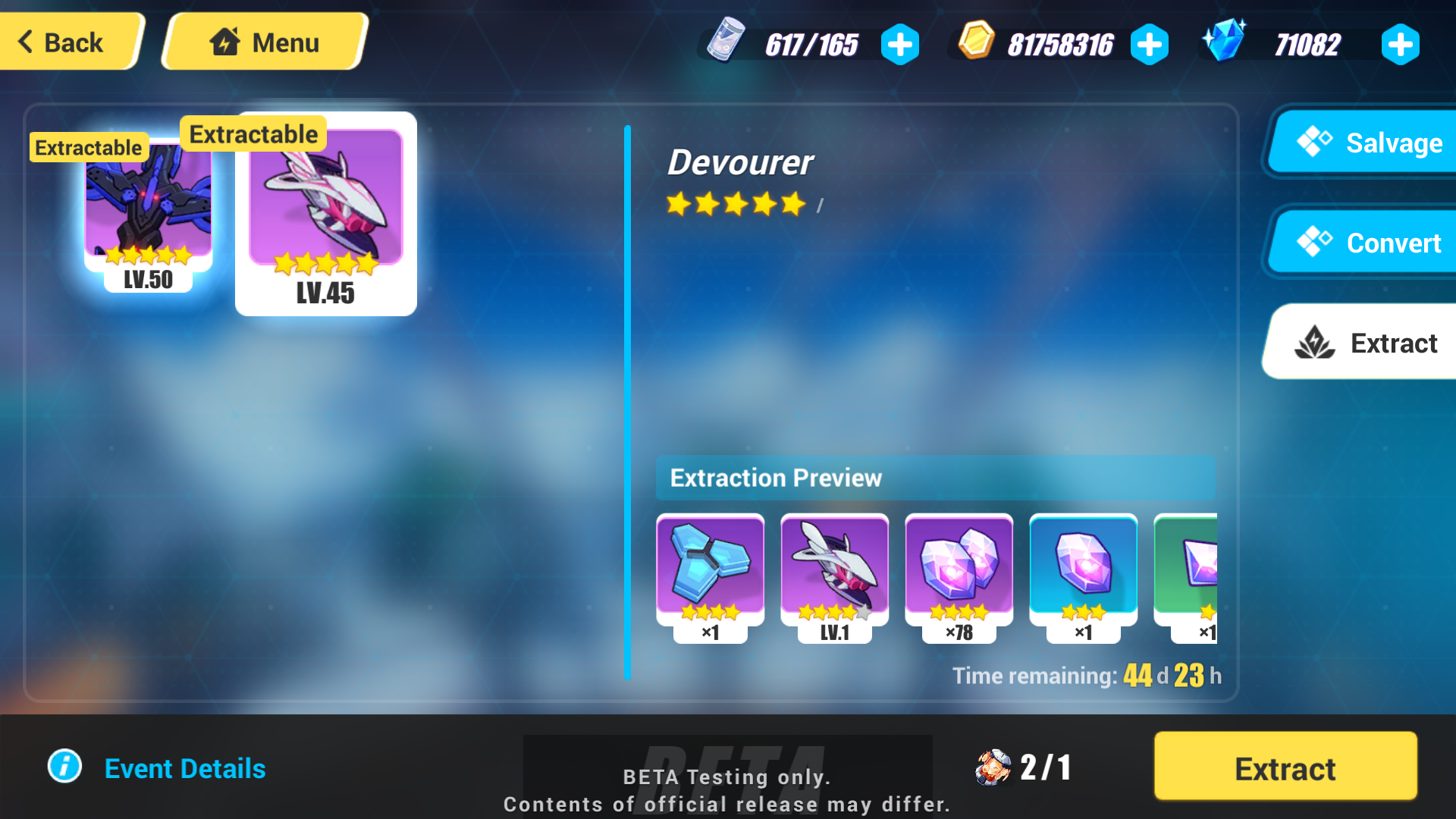 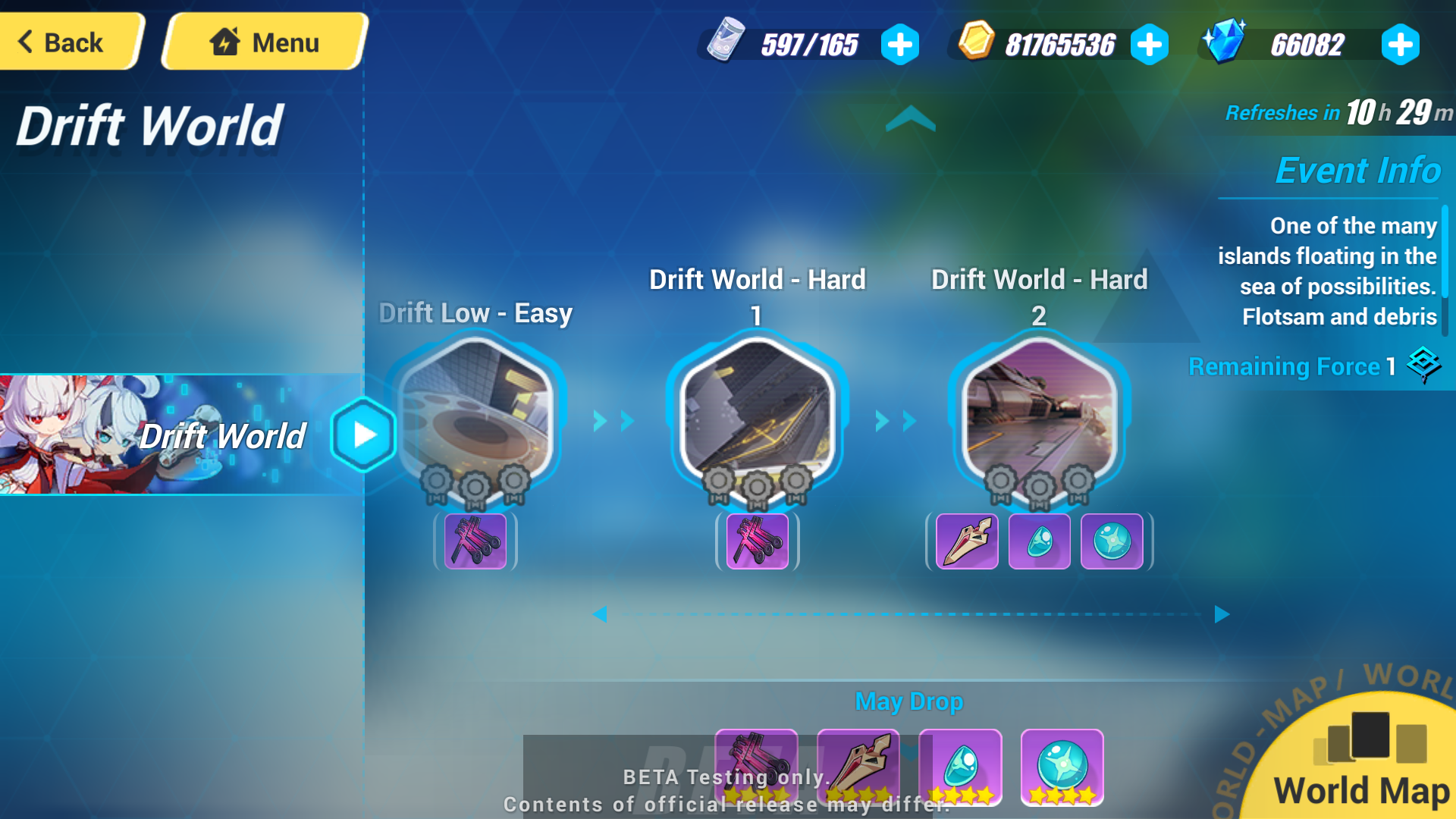 Abyss rewards Witness of Blacksun have been changed to Gold Pins and Advance Skill Materials.

In CN server, only Dirac Sea is available during v3.6. This was the result of a major Evadion exploit in Q-Singularis during v3.5. Ai-chan decided to punish everyone who abused it and decided to close Q-Singularis until further notice.
This is unconfirmed for Global / SEA server.

CONCLUSION
There are other stuff not mentioned such as new emojis in chat - you have to play v3.6 yourself to see all the new stuff! Note that some info are based on Beta and CN server, so changes might happen in SEA / Global version. If you would like to know more about v3.6 or future content, you can contact me on Discord - Marisa#4065.

Finally, I would like to thank Ai-chan team for giving me the opportunity to play v3.5 Beta and making this guide possible. Hopefully, we'll meet again in another guide.